I didn’t know much about this light, but I figured, I have a few 26650’s so might as well give it a shot! Kathy at GearBest sent it out for review.

Utilizing Cree XHP35 HD LED, this powerful illuminator is able to generate up to 2000Lm of illumination, as well as 5 constant brightness outputs, which provides a wide variety of lighting options. While its impressive output is what makes the PK26 stand out, it’s the max 500 meters monstrous throw that sets it apart.

Caution: high drain batteries that can withstand more than 15A current (not included) are recommended.

The BTU PK26 is in fact quite the little pocket rocket. It’s a little big for pocket carry, but it’s great for it’s intended purpose.

The accessories come in zip top bags. Surprisingly the light comes with the extension tube installed, and the 26350 ‘installed’ (it’s just loose in the twice-too-big compartment. This isn’t a problem – the cell doesn’t get damaged – and I’m sure it’s done this way so that the light can ship from [wherever] (in my case, China) without worrying about the restriction of shipping Li-ions (typically if the cell is an ‘integral part’ of a device, it’ll ship just fine).

There’s no manual so to speak, but the specifics of the UI etc, are printed on the back of the box. 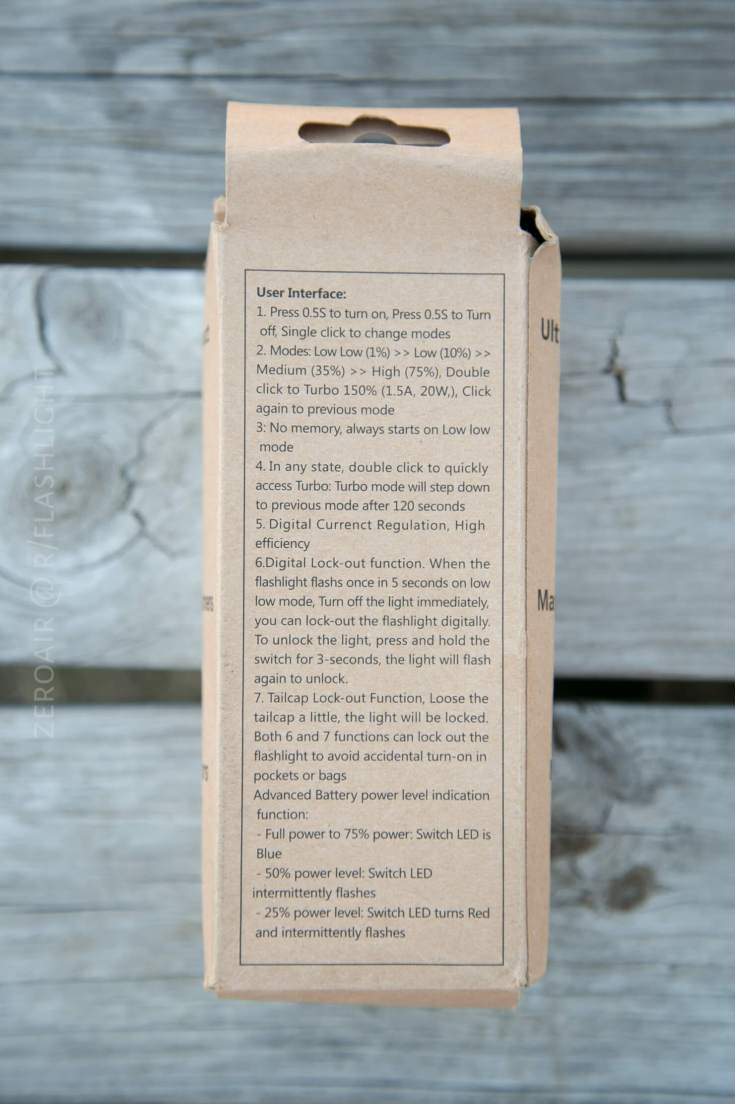 Here is where I’ll note that it seems this light was developed with (or “for”) BudgetLightForum, and one of those threads can be seen here.

I want to lead with this embarrassing story relating to the build quality of this light. When I received this thing, it had the 26350 installed. Quite frankly I’d never even seen a 26350. I was all ‘what is this thing’? Furthermore, the extension tube for 26650 was installed. So I had this 26350 in the light, filling half of the battery compartment, and I was shaking my head.

The thing is, the seam that connects the extension tube to the regular tube is so clean I could not even see it. That should be a good window into the build quality of this light. It’s not perfect but it’s is well built. It’s visible now after some use, but not in a bad way.

The anodizing feels a little thin, but has held up to my usage of the light. The threads are also unanodized, and also unlubed. So they felt a little grippy, but they are square cut and once they’re threaded on sufficiently, connecting the parts is very smooth.

The button is quite prominent and very clicky. The pocket clip holds very snugly to the light and to a belt, etc. The tailcap has great grip for unscrewing, and there’s a big hole for a lanyard. There are also slots for tritium vials all around the head, which I really like.

Disassembly is easy – the bezel screws right off. The reflector falls right out. The mcpcb does look to rest on an integrated shelf, so I’m not sure how easy it’d be to get out for a swap, but probably possible.

The head and tail cap don’t actually have springs, but have rubber/foam pads to cushion the cells. 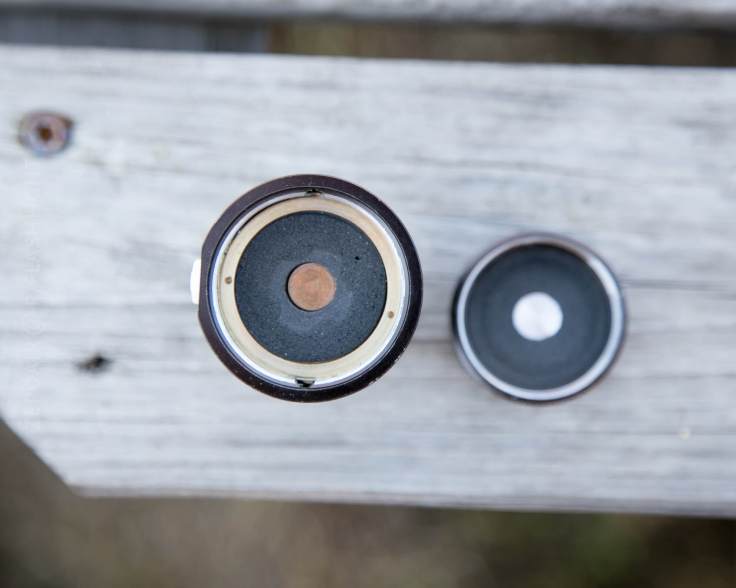 As far as 26650 lights go, this is probably my shortest. The head is quite large, but as a pocket thrower, you expect that. It’s not unusually large, but I will say that the ergonomics of the size/shape of this light make it a little… odd. It’s all edges. The head truncating in a corner and not smoothly to the body – unusual! But that actually probably gives more room for full diameter fins, and so this light can probably be expected to handle heat better than if it was ‘normally’ shaped.

Here are some lights you might know, for size comparison.

There’s a lanyard hole in the tail cap, and a pocket clip, and a mesh bag. The pocket clip only works with the 26650 setup – with the shorter cell, the pocket clip hangs over the end of the light by about 1″. The clip also forces a “lens up” orientation. The mesh bag doesn’t offer any connecting/hanging options, so it’ll have to go in a pocket or bag if that’s the carry method.

If I carried this light much, it’d definitely go in a bag. I think it’d be a great light for that!

On a runtime test with the provided cell there’s what I call “soft termination” – the light flickers (almost like a candle) to let you know the cell is below the light’s voltage threshold. In my case, I stopped the test and pulled the cell and it was at 2.9V.

There’s one pronounced rubber clicky on the side of this light. All input is from that switch. The light has an interesting UI; not hard to master, but still I don’t know any other lights like it. Double clicking this button is difficult for some reason…. the reset isn’t quite right for a quick second-click.

Noteworthy that there’s no manual – but the UI and other specifics are listed on the back of the box.

You know I like UI Tables. Here is one.

* There is a marked pre-flash of high or turbo when turning the light on to low. The preflash is an absolute killer!
** Turbo stepdown is 120 seconds. Stepdown is to High.

There’s an electronic lockout, too – in Low mode, wait 5 seconds for the light to flash. If you turn the light off directly after the flash, the light will be electronically locked out. Hold the switch for 3 seconds to unlock. And of course, the tailcap can be loosened for mechanical lockout.

One interesting sidenote – the back of box manual states that the switch is an indicating switch, with a blue/red led.

I finally got my side switch to indicate, but it is very faint. So faint I’m not sure I’d have noticed it if I wasn’t looking for it. But it does seem to work, so that’s good. 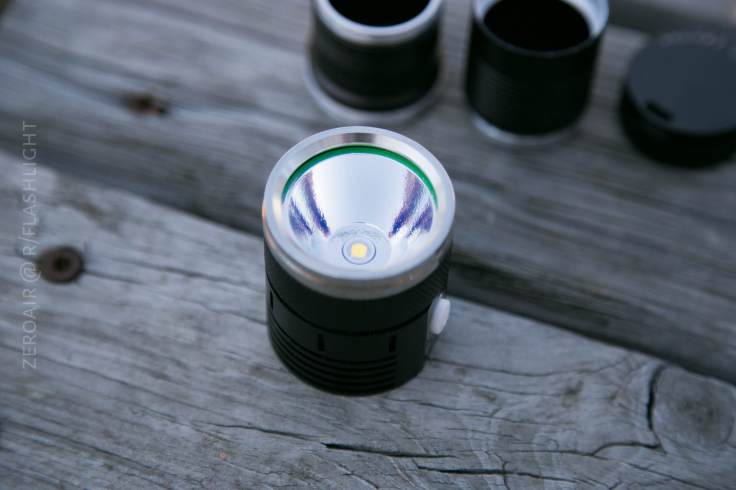 The “HD” part of that indicates this one has a dome – there is a HI version of the emitter, which doesn’t have a dome. The reflector,

though shallow, does throw quite well – there’s a distinct spot with little spill. I may be green-sensitive, but as with some other lights I’ve seen lately, I find the tint to be on the green side. There is a CW and NW version of this light, and of course I opted for NW. I have at least one other XHP35, and I found it on the green side as well.

The beam is very useful and maybe a little unexpected from a light this size. Quite throwy. 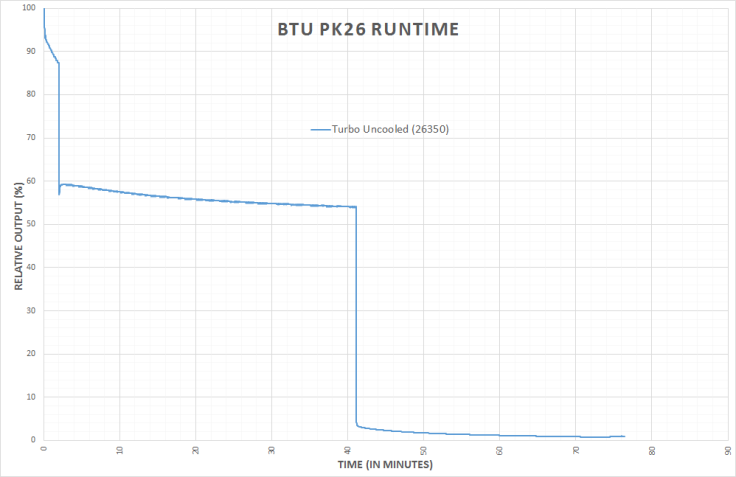 I’ll be honest, I don’t know of a single other 26350 light, so if that’s your thing, then the BTU PK26 is the light for you. On the other hand, there are a bunch of other 26650 lights. Lights with bigger heads like the Shadow JM30, for example. But this light seems to fill a niche that is otherwise unmet – the capability to switch cells, and be a much shorter light. So I wouldn’t really compare this to much else on the market.

Great light for pocket throw – if you have big pockets. It delivers it’s promise, and there are few (if any?) lights like it. It took me a little while to really like the light, but I do like it now, and I recommend it if it fits the needs you have! 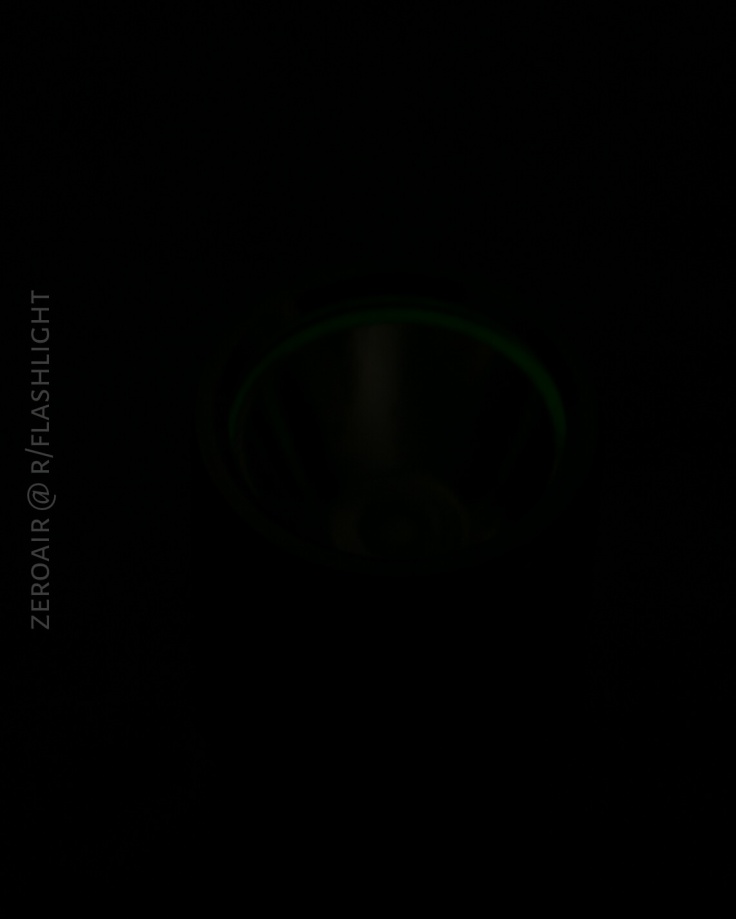 This light was provided by GearBest for review, and the links herein are affiliate links.