I’m new to reviewing knives.  To wit: this is my first knife review.  I am not new to knives, though.  I was once new to reviewing flashlights, too, and now I have almost 50 of those completed.  I review many lights for various makers, but GearBest asked me to review a couple of knives.  This is the first one: the Ganzo Firebird G7533.

I’ll also note here in the preface that I wrote this review for reddit!  I’m just hosting it here because formatting is easier, and … well prettier….

I did have a coupon for the Ganzo Firebird, but I’m afraid my post has been delayed and the coupon has expired.  It was for $1 off the $17.39 regular price.  If anyone’s interested, comment here or message me on reddit for a coupon. 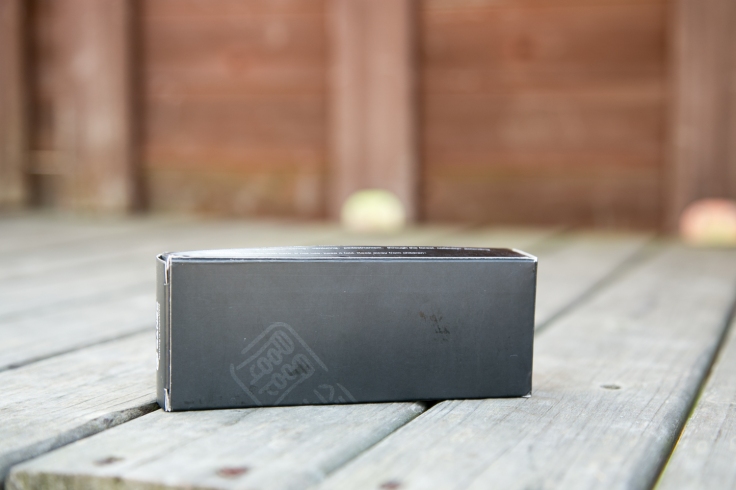 The knife arrives in a plain cardboard black box.  There’s some printing, and facts about the knife but generally it’s pretty simple

As usual GearBest will include their own inventory sticker on the box. 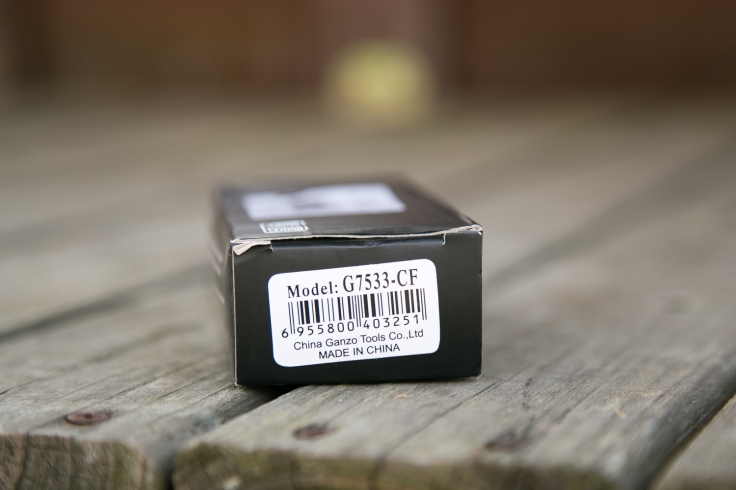 The Ganzo is clearly, absolutely striking.  The carbon fiber handles. The blue anodized metal accents.  The titanium coated blade.  Even the clip looks great on this knife.  The blade shape is really not my favorite – it has a bit too much belly and point, but still looks good enough.  I do not care for the Firebird logo on the side of the blade.

Opening this knife begins with a bit of a click from the axis lock – as it pushes back from closed.  Then the blade locks up snugly (ever time thus far!) with a grainy but positive thunk.  It’s all positive and clear, but it’s not as clean as some of my other knives.  Definitely not as clean as the Mini Grip.  Closing is almost the same in reverse, with the added sound of depressing the axis lock.  Out of the box it needs oil (at least, maybe even cleaning), so all that can be heard in the action.  Then the blade drops into the scales with just the right sound.  And it’s snug in it’s home. 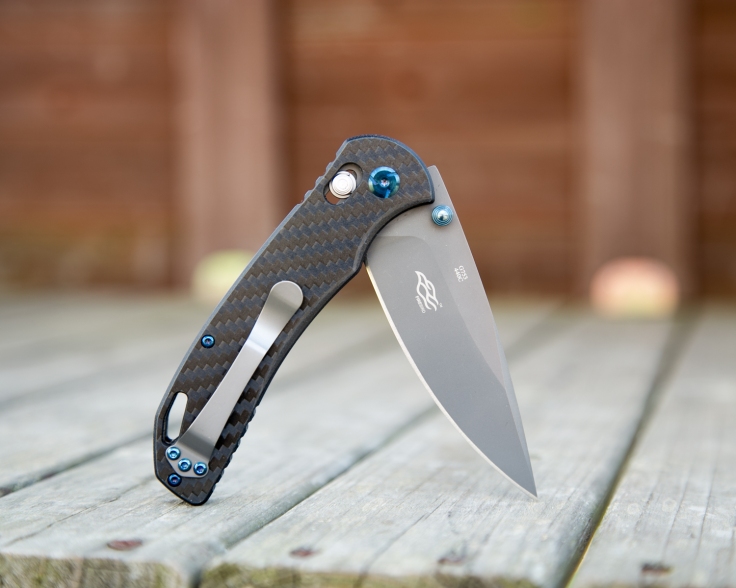 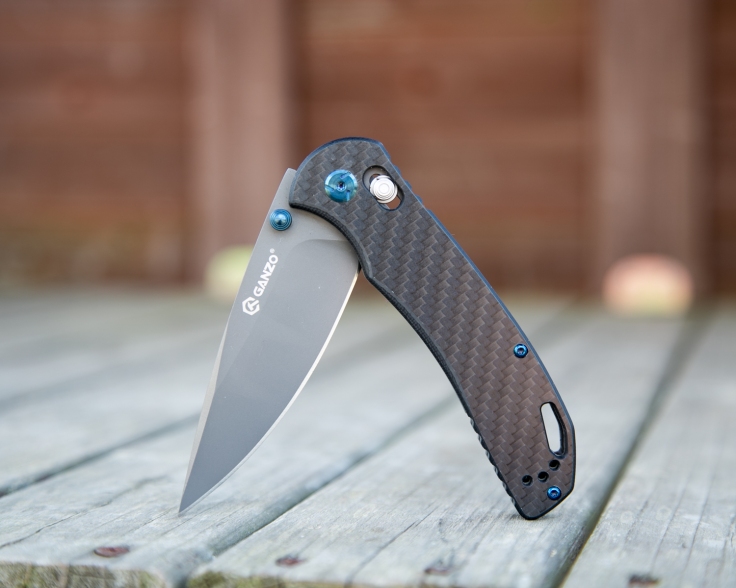 First off I’m an absolute huge carbon fiber fan.  The look of this knife had me from the start (I actually for this one specifically once GearBest asked me to do a knife.) In hand the knife feels great.  While the textureless carbon fiber scales have little grip on their own, the bare edges  of those carbon fiber scales do provide grip.  There’s no choil on the blade but in the handle of the knife there’s a place for the index finger – the rest of the knife is long enough for the remaining 3 fingers (if you have that many left).  It’s also clearly meant to be held this way, as the jimping is on the handles and liners, and not the blade itself (ie, no jimping on the blade!).  For right handed users the clip as it’s installed will fit right into the palm of the hand, and it fits there nicely.  Anyway the clip is reversible, requiring three Torx screws to be moved with the clip.  Speaking of the clip, it’s a big paddle style clip with a large mouth.  Also quite springy, and tight.  The liners are full metal liners.  I found the blade to be perfectly centered on my sample. 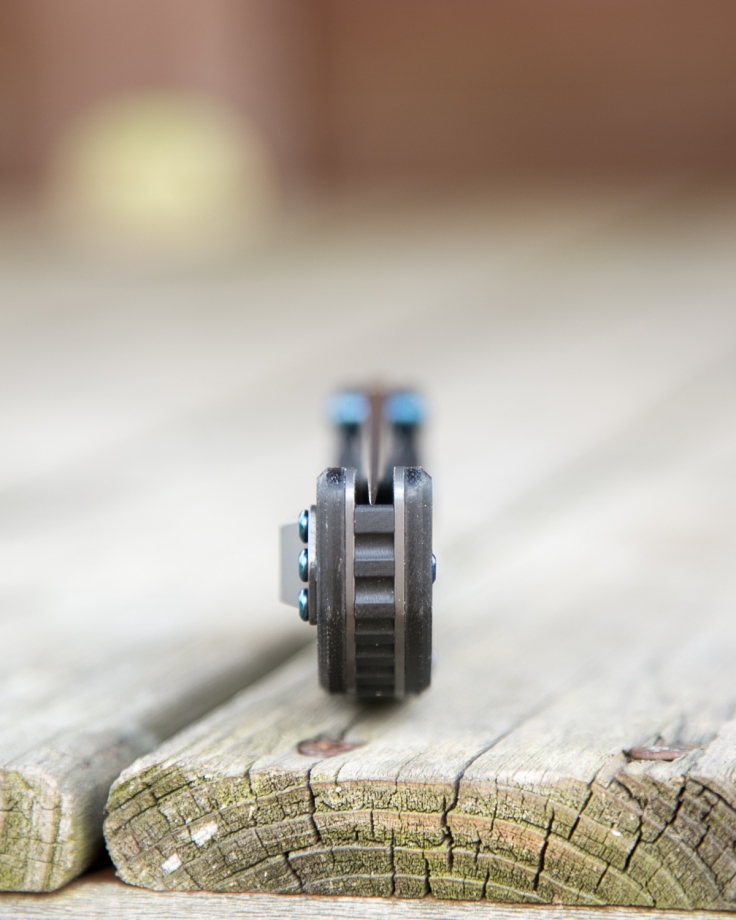 Oh one thing I really want to mention – something I’ve never seen in a thumbstud before.  The thumbstud rolls… it’s not static.  So as you deploy the blade, the thumbstud rolls to help you. It helps but really it’s a big marginal to say it makes a huge difference.  Probably doesn’t; is cool. 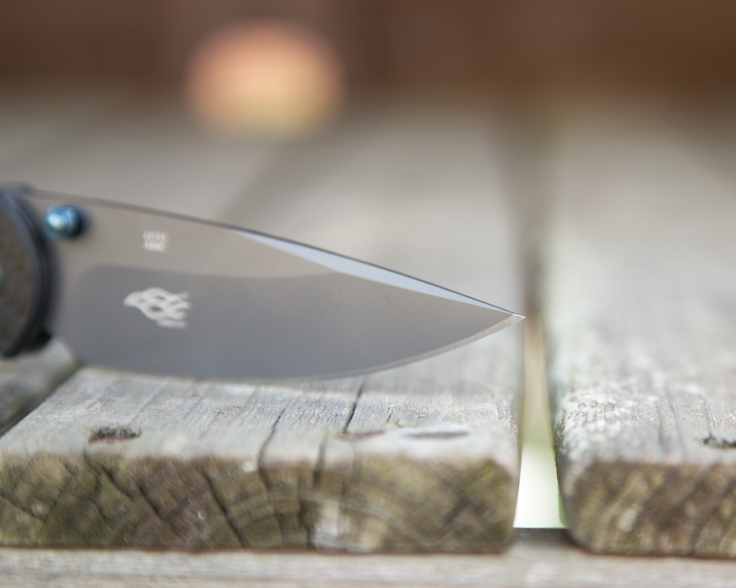 The coating on the blade is called “titanium” coating.  I haven’t had any issues with flaking or scratching, but at the very least be aware that the blade is coated.  I believe there are other versions of this knife with uncoated blades.

As stated, there’s a reversible clip for tip up carry.  Tip up is the only option.  Really the axis lock gets in the way of the other option.  There’s also the included pouch with the firebird logo, but I can’t imagine anyone ever using those….  But it’s there, included!  The knife carries a bit big – it’s long at 12cm closed.  However it’s not especially thick, so it still carries well.  (Really compared to some of the flashlights I edc, this isn’t bad at all. 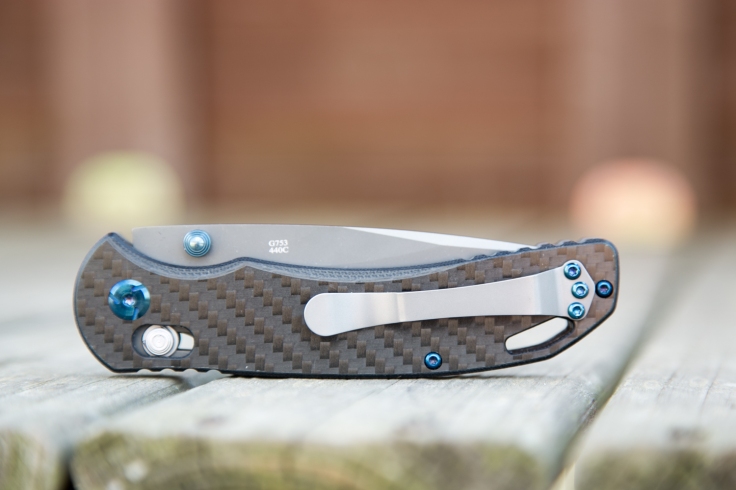 Probably already gave it away, but this knife has a great vibe.  While it could be too large for carry in some jurisdictions, it’s still worth owning for some heavier jobs.  If your job allows something this big, it’s still great, since the carbon fiber and blue accents set it apart and even maybe make it “gentlemanly.”

That said, keep the firebird logo pointed away from anyone who might see.  It adds nothing whatsoever to the knife.  (Unless that’s your thing, in which case…. good on you.) 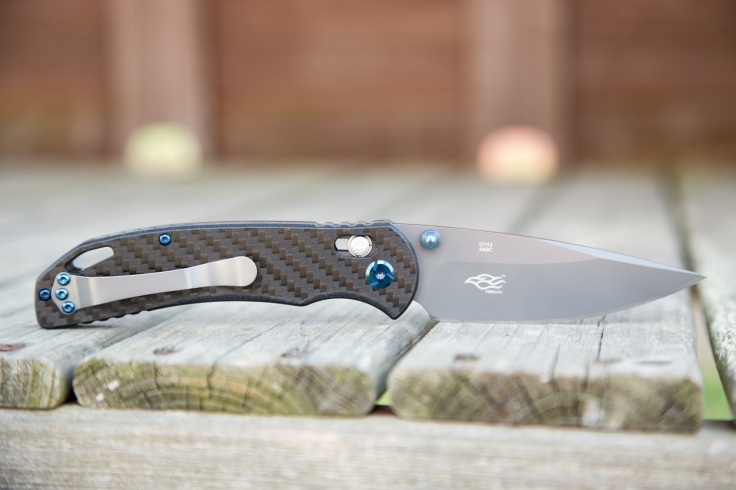 I am surprised to say that this Ganzo is quite sharp.  It’s not evenly sharp – the tip-to-middle half is much sharper than the middle-to-handle half.  The good half slices paper easily.  The bad half cuts it, but jaggedly.  I do expect this knife would sharpen up nicely.

In other words, I’d recommend this one as a great beater knife.  At the very least, it’ll look stunning while taking the beating.