Here’s the second of two knives I had from GearBest, to review.  This is my favorite by far, and I’m glad to show it off below.

The coupon I have is OUT15OFF and here’s a link to the item.  That coupon should take 15% off the $7 price of this great knife. 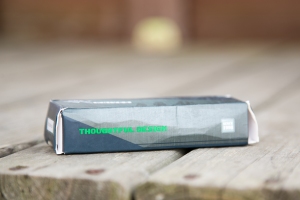 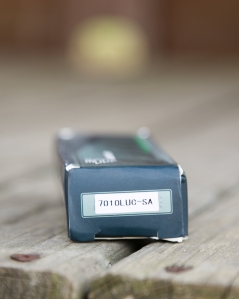 This Sanrenmu 7010 ships in a small cardboard box.  The box as usual, has a lot of verbiage and also the GearBest sticker common to all GearBest items.  The package is nothing special, but then, my goal isn’t to carry around the package – it’s the knife I care about.  And the package does a fine job of delivering the knife to me unharmed, ready for my own abuses.

I have wanted this knife since the absolute second I saw it.  For me it was close enough to the Chris Reeves Small Sebenza – a knife I don’t imagine I’ll ever buy – that I was game. And at $7 or whatever ridiculously low price this knife is, its almost silly not to own one based on the look alone.

The blade shape is nearly perfect for my needs (though, still a bit large!) and overall the look is just great.

I believe there are [at least] 6 versions of this knife, with varying finishes and handle materials.  All very nice, but this is easily the classiest one.

The texture on the handle does provide a fine bit of grip, but it’s more or less in the wrong place for providing actual grip.  It breaks up the monotony of a single finish scale nicely, however. 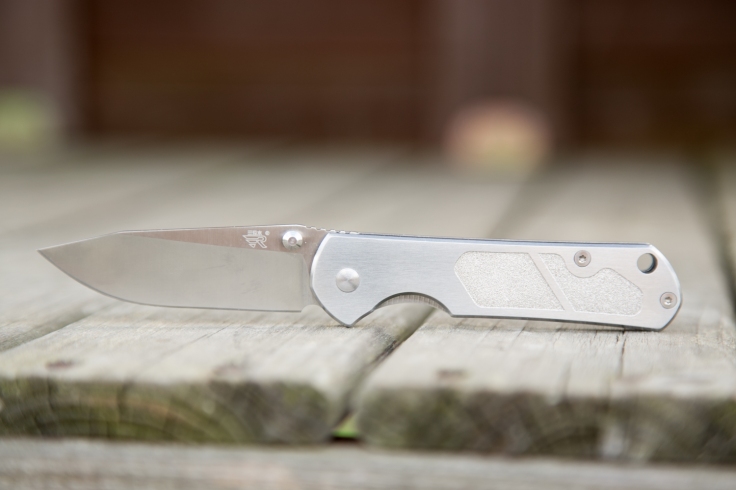 I love that this is a fully metal knife.  I like all kinds of knives (plastic scale knives included) but this metal scale knife is especially nice.

The knife clicks open very solidly.  It’s absolutely perfectly silent as the blade swings open, and about 7/8 of the way open there’s a little pre-click, and then fully open is a solid click.  After locking there’s no play whatsoever in any direction on the blade.  Unlocking and folding the blade closed is silent, too.  The frame lock makes no sound, and there’s nothing to click.  Silence is nice… and when the blade goes home, it makes a snug single click, closed.

I could not be happier with the build quality of this knife.  I have other much more expensive knives, and I’m as happy with this one as I have been with those.  It’s just a ridiculously good knife for the price.  Even for much more than the price, it’s great. 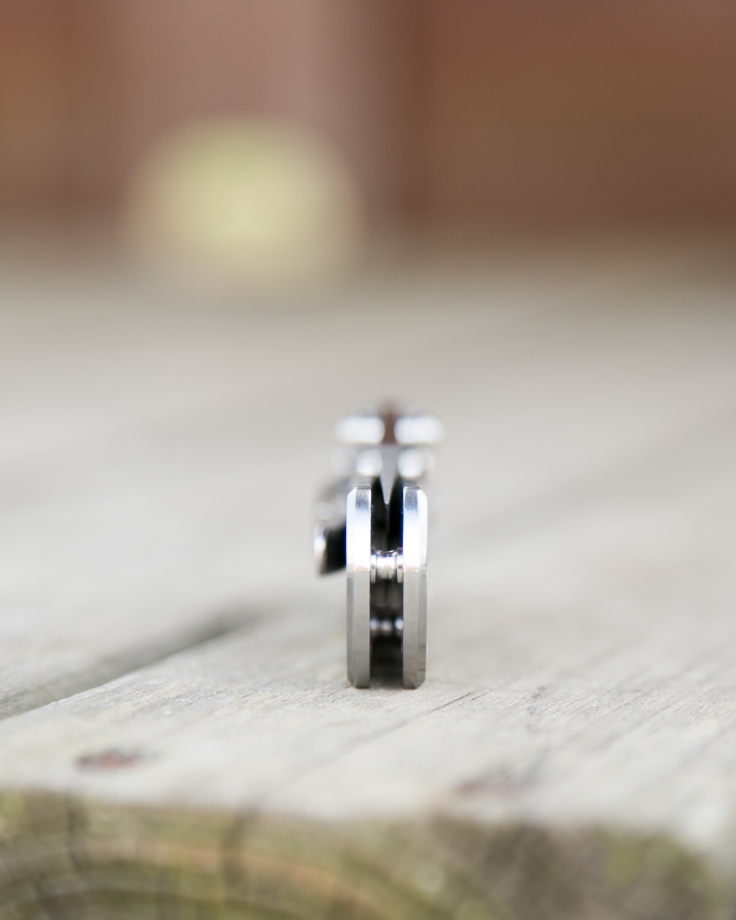 That blade is centered to withing a few microns I’d guess.  I didn’t adjust it whatsoever – it’s like that from the factory.

There’s also a nice brushed finish on the blade – very precise, too…. almost more of a satin than “brushed.” 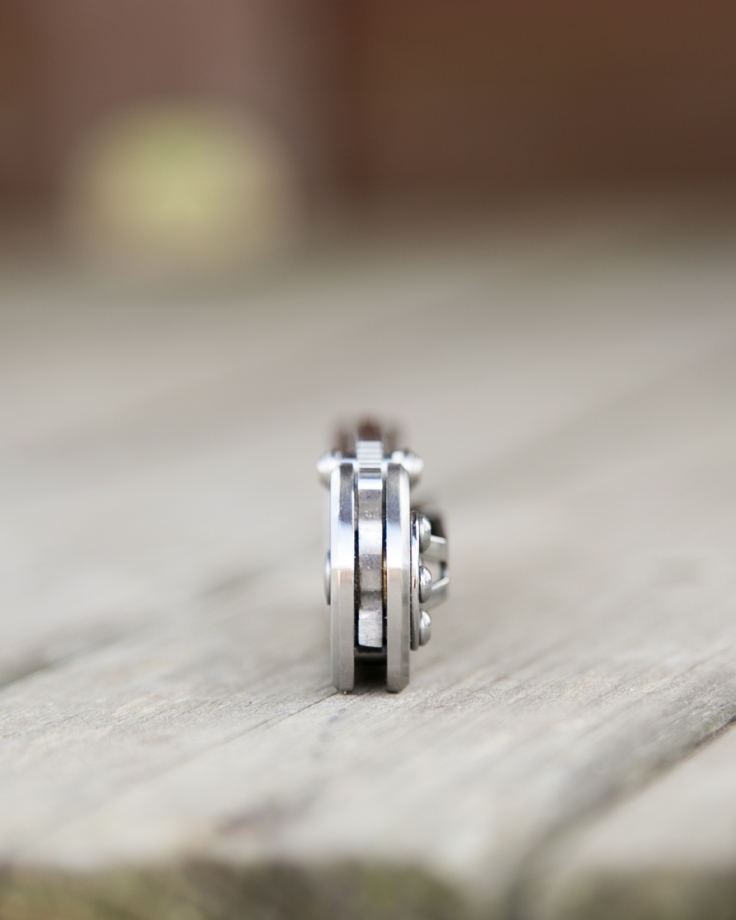 Here can be seen the spacers keeping the blade centered.  Possibly nothing special, but there they are. 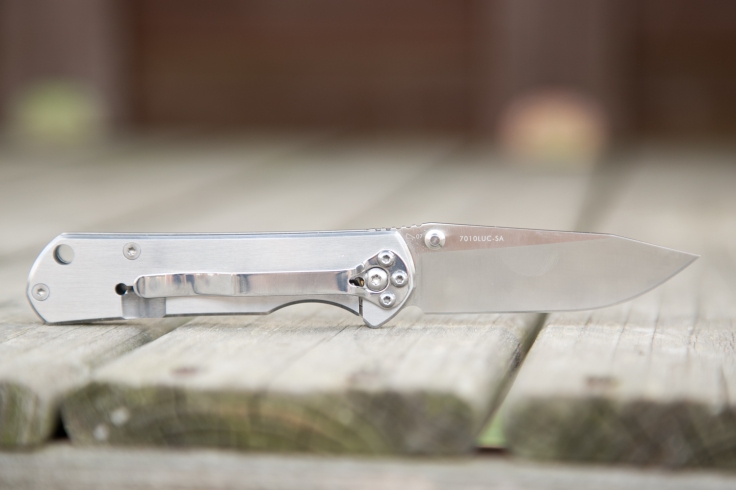 The pocket clip on the 7010 is installed at the factory, allows for tip down carry only, and is not ambidextrous.  That’s not my favorite thing about this knife, for sure, but I’ve become used to the tip-down carry.  I’d almost prefer no clip, and may end up carrying the knife that way.  The clip may appear to be held in place by four screws but it’s really just the three smaller ones – the clip has a cutout to allow the pivot screw to pass through. So the clip can be removed without disturbing the pivot screw.

The clip has a large mouth and is easy to get on pockets and the like.  It’s also very smooth, so it doesn’t harm pants pockets at all.  Unfortunately it’s definitely not a deep carry clip, and doesn’t ride quite as low as I’d like. 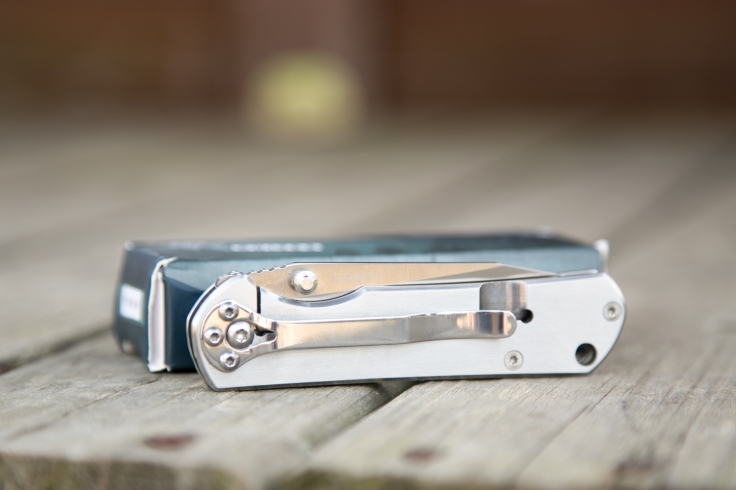 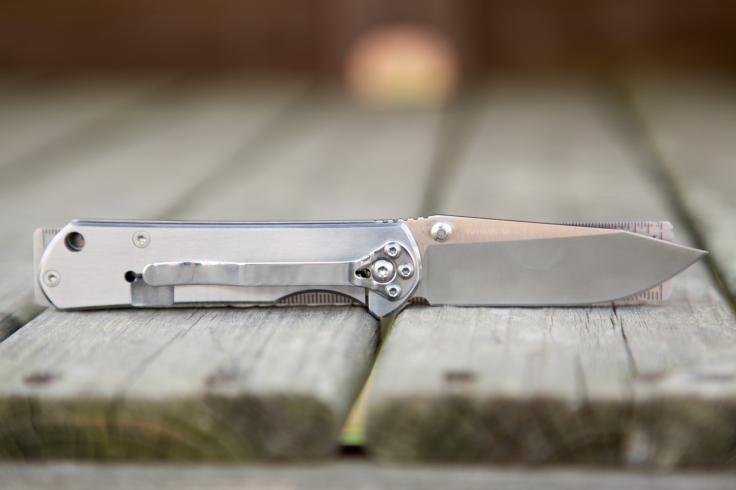 At juuuuuust over 6 inches long open, the Sanrenmu is a perfect dressier (smaller) knife for carry.  Even being small, the blade is plenty big for many task.  My normal carry is a Spyderco Manbug.  I’ve recently transitioned to a Spyderco Dragonfly 2, but still – I prefer the small knives.  This Sanrenmu scratches that itch. 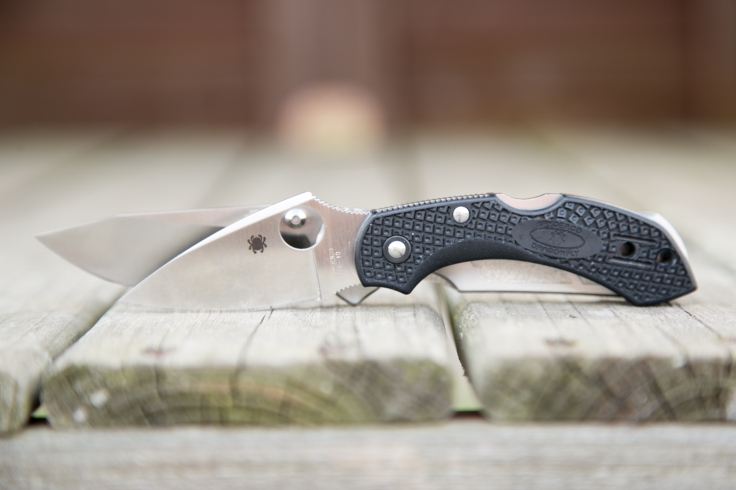 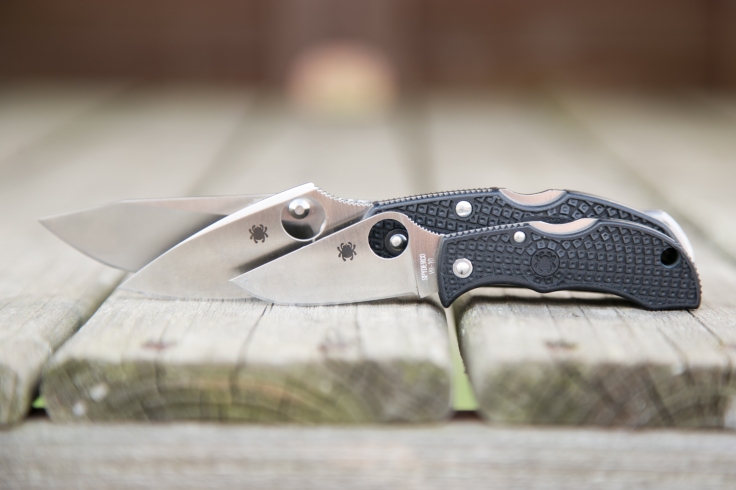 That’s with the Ganzo I just reviewed, and the CRKT wood knife. ^  And below, some bonus shots. 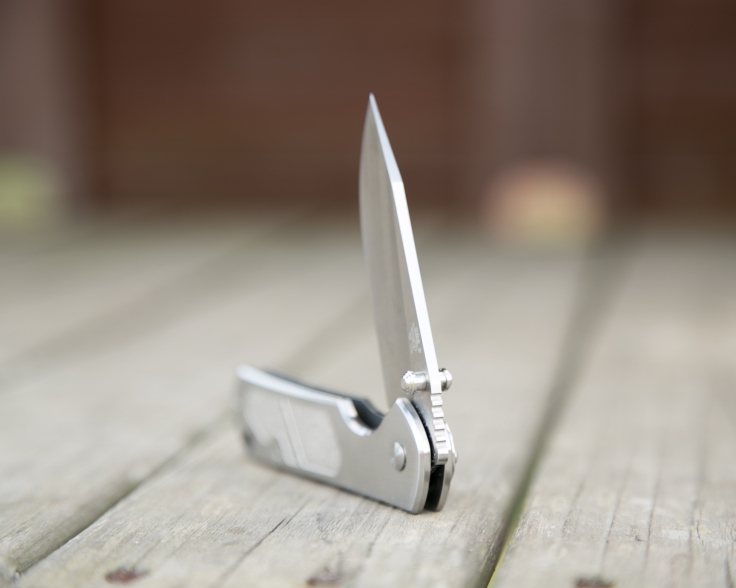 This knife has a fantastic vibe.  It’s just the right size to carry anywhere, and even a small enough to be a backup to your larger knife.  It’s well made and cuts well.

I don’t want to judge how this knife cuts based on it’s cost – that’s unfair to more expensive knives.  I’ll try to address that further in the Value section.  However, regardless of cost, the knife cuts great.  Mine was evenly sharp throughout the blade, and needed no touchups.

At the listed price of $7, this knife is a ridiculous value.  I can’t even imagine there being dispute about that.