Every now and then, NitecoreStore.com will reach out to me for a review of a specific light… Such is the case with this Nitecore MT06MD.  I only just finished the Thrunite Ti4, so it’s nice to have a comparison light so immediately after that review.

There is only one version.

This light is specifically designed for medical responders and the like.  It’s very nice that the Nichia high CRI 219B emitter is standard, and the size and shape are great for that application.  As a general penlight I think this is a win, too. 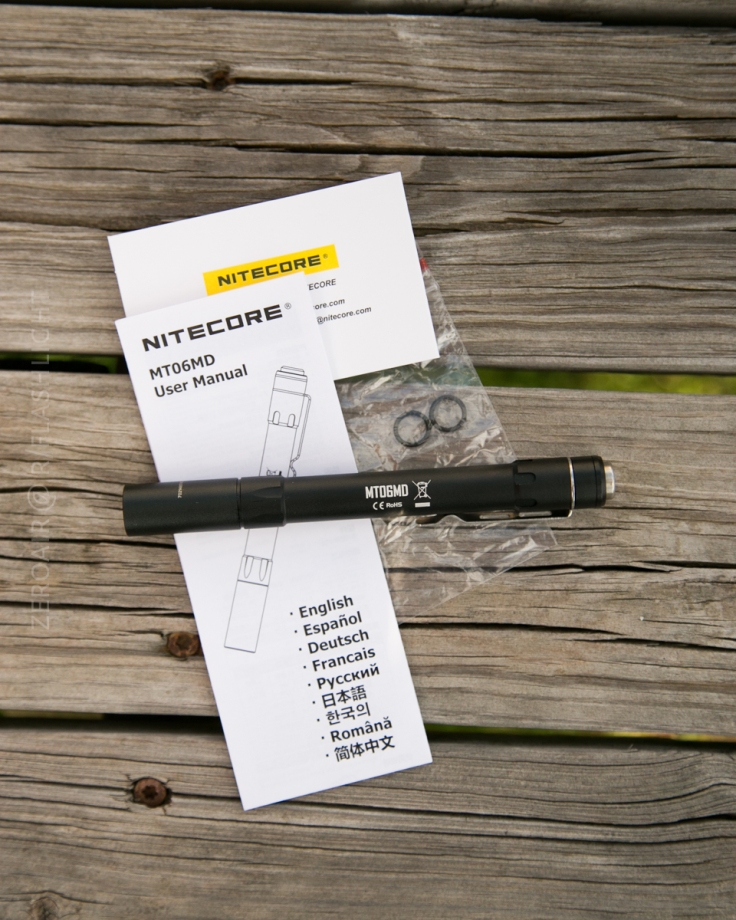 Here is a photo album, and beamshots, and a runtime graph.  Enjoy!

This light comes in a long and thin – but typical – Nitecore package.  There’s a window allowing the light to be seen, and a hang tag for easy store display.  And of course, the box is black and yellow. 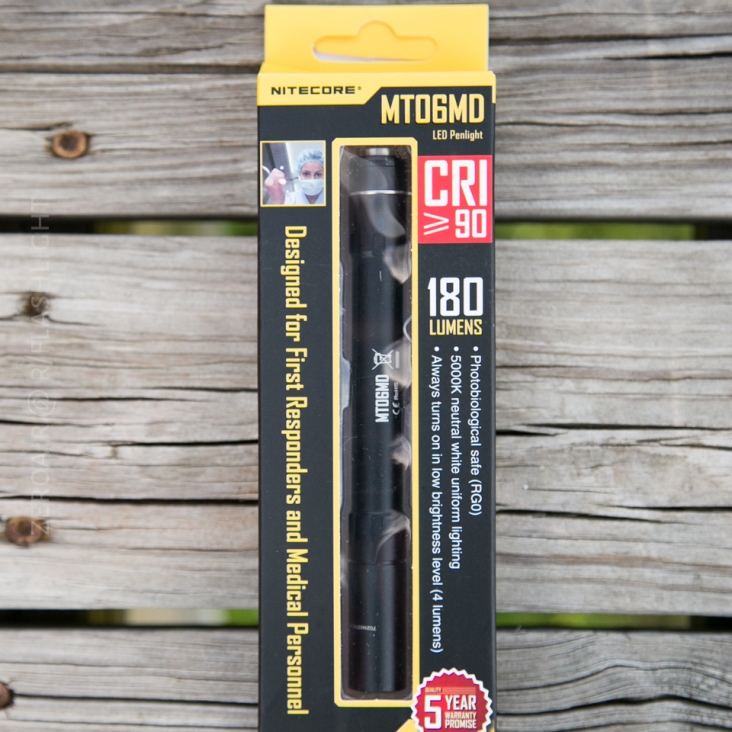 Here’s the actual [English part of the] manual.

The MT06MD has a very nice build.  A build that’s clearly been well considered.  The aluminum body has machine marks… but they’re intentional machine marks.  I won’t say they’re intended for grip (they probably are), but they’re very fine lines.  They go around the light, and don’t have any cross hatching, and the light has no knurling.  It’s an interesting grip mechanism, and I’d be interested to know why they chose it.  I really like it though.  It’s fine enough that it’s not really visible, and only really noticeable when rubbed with a fingernail or something.  I’m sure there’s a great name for this type, but I don’t know it. 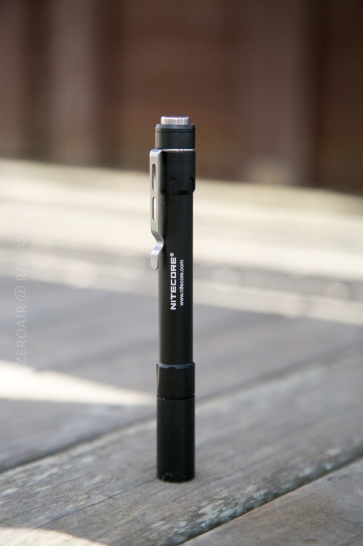 Another nice aspect is that this light has a metal button.  A flat metal button.  That means more for actuation that it does for tailstanding (the light’s balance means it won’t tailstand, even with the flat button!).

The head unscrews easily (to wit this is how cells are swapped), but the driver looks to be press fit in.  So I’m not sure and doubt it’d be easy to emitter swap the light.

The tailcap cover also unscrews, revealing a rubber boot over the plastic switch.  This is why the light won’t tailstand, in fact.  I could not get the pocket clip retaining tail cap off to discover if the clip is removeable.  It almost has to be, however.  As a matter of fact, this is exactly where the grip rings mentioned above get in the way – they hinder grip in the “unscrewing” direction!

Having said that about disassembly… why bother?  High CRI 219B anyway?  Is probably what you’d want to be adding anyway.

Bog standard 2x AAA light size.  Nothing extraordinary or exceptional.  The shape is a bit less curvy than the Thrunite Ti4, but that’s neither a complaint nor a criticism.  It’s a fine size, and fits in pockets and the like just fine. 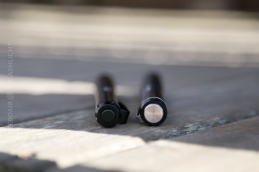 The only included way to carry this light is with the pocket clip.  It’s also a great way – it tends to disappear in a pocket the way I carry it.  It’s also really slim enough to be carried in the front pocket, and would feel right at home in a lab coat with other tools.

The MT06MD is powered by two AAA cells.  I chose to use Eneloops, and they’ve worked great.  Primary cells work too of course.

Here’s a runtime graph on the highest setting (of 3).  Compare that to the claim of 45 minutes on high. 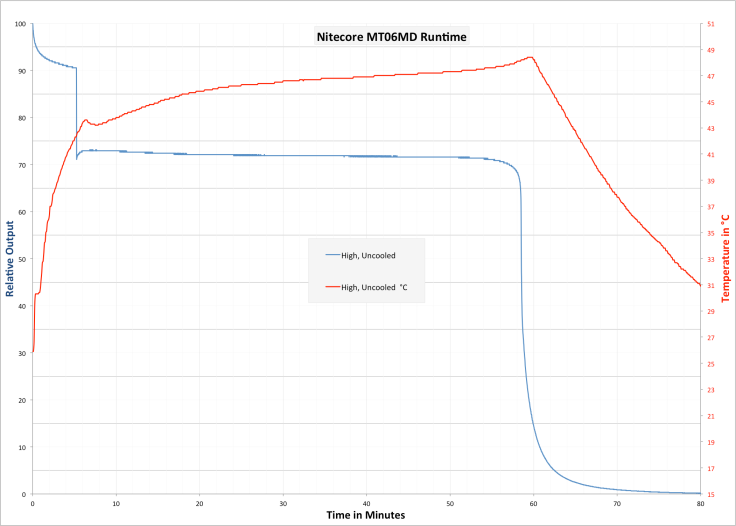 Cells (Eneloop AAAx2) were at both 1.49V at the start of the runtime test.  At the end, 0.86V and the second cell was initially [zero?] but bounced back to around 0.87V.  Ergo, I don’t trust that this light has any LVP at all, which is disappointing.  I can overlook that since NiMH are pretty safe anyway.

There’s but one button on the MT06MD, and it’s the aforementioned metal tail reverse clicky.  The metal cap is actually over a rubber boot, and the action of the button reflects this.  I tried the switch without the rubber boot, and it doesn’t fly.

There are only three modes.  Accessing the modes works in the normal reverse clicky way.  There is no mode memory – the light always comes on in low.  This is purposeful, since this light is designed for medical uses.  So, no mode memory, always starts on low, reverse clicky…. this is shaping up to be a UI I love!  To change modes from low, just half press the clicky to any of the three modes desired, in the order L>M>H.

The manual states that this light will step down after 5 minutes, to save battery.  I did not experience this during the runtime test.  I’m glad too; that would be a terrible feature.

As discussed amply above, this emitter is the venerable Nichia 219B.  That means that out of the box this light has a great color/temperature and also has high CRI.  Nitecore quotes “≥90 CRI”.  This is an excellent development, and I hope it sells well so Nitecore will drop this emitter into some other lights!  (Nichia MH20 please!)

A “PDOT” (Precision Digital Optics Technology) reflector is used in this light.  That’s Nitecores special term for a reflector.  In this case it’s smooth and also fairly deep.  The lens has an AR coating, too.  The deep smooth reflector gives a nice beam with a surprising amount of very “spot”, and a minimal-to-fair bit of spill.  On low for example, even at 6-10″, the spill isn’t even very noticeable.

The MT06MD does not use PWM for the low modes.

Clearly the first thing I’ll think of is the Thrunite Ti4, which I just reviewed.  Between those two, I’m going to almost always prefer the Nichia 219B light, and in this case that’s the Nitecore.  Build quality isn’t appreciably different.  I like the Nitecore UI except the 5 minute stepdown.

Aside from that, the 219B Nichia really separates this light from anything else in the 2xAAA category.

I expect to finish the TorchLabs BOSS next, but I might jab a knife in there first! 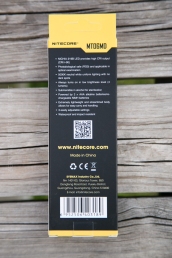 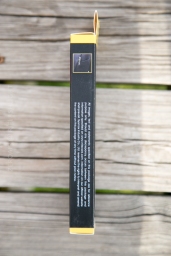 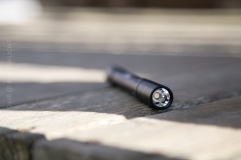 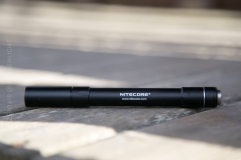 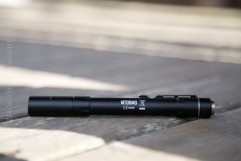 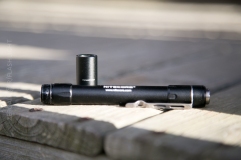 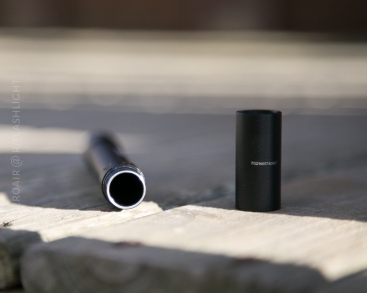