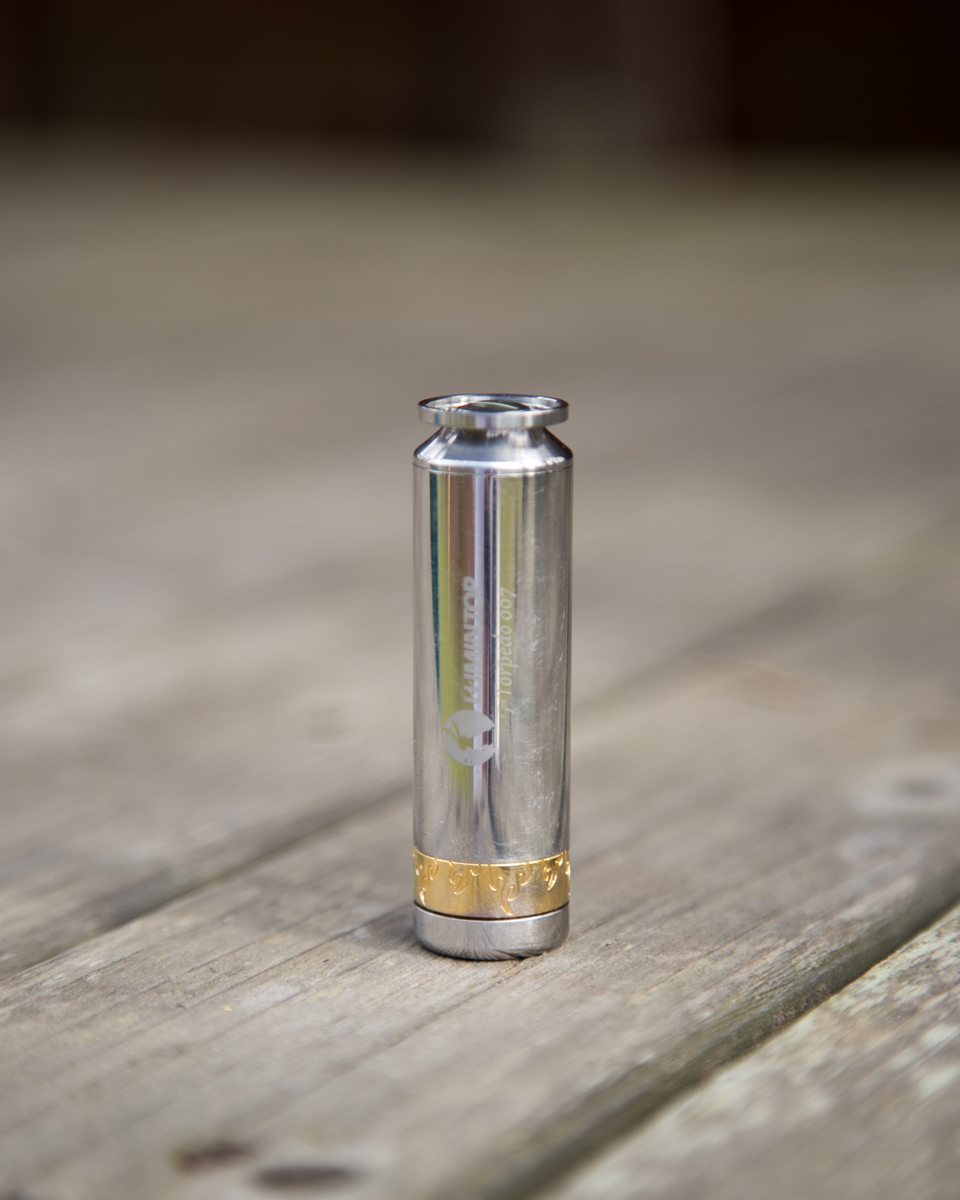 I started talking to Banggood.com recently and they agreed to send me a light.  It’s this Lumintop Torpedo 007, which I’ve been fairly fascinated with since I first saw it.  As a TorchLAB BOSS owner, I clearly like lights that look like bombs.  This Torpedo is right up my alley.

Really there’s just one version of the Torpedo but there is another light – that is, a light with another name – which differs only in finish.  That light is the Elfin.  I’m actually not sure why these lights even got different names.

The MSRP of this light appears to be $48.90.  It’s available in stores like Banggood.com with tritium for around $55.  It’s a worth while addition in my opinion.

Despite how this light might appear (simple and hard to carry), I really like it. More importantly, I like carrying it.  I view it as a kind of big keychain light.  It’s actually not much bigger than a light like the Nitecore TIP, and can be attached similarly. 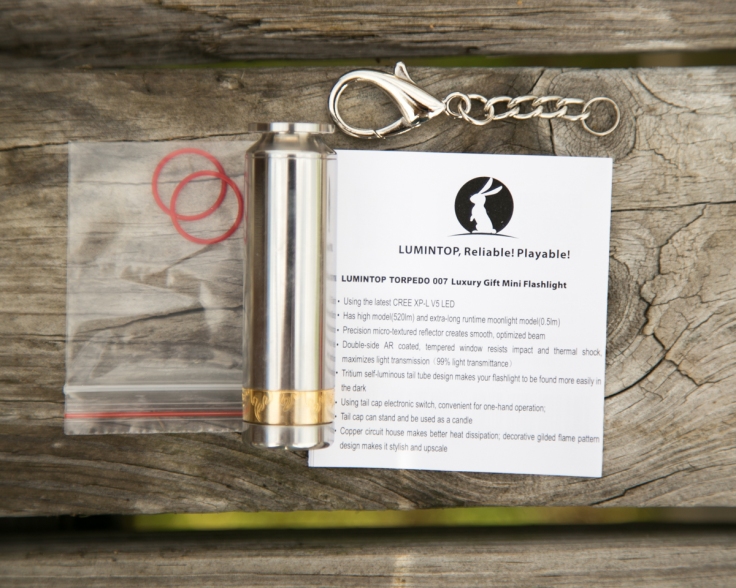 Here’s a photo album, some indoor beamshots, and a runtime.

The light arrives in a flip top (ring display type) box, inside a cardboard sleeve.  The light sits in the box diagonally.  My box was damaged a little bit, but the light was in fine shape. 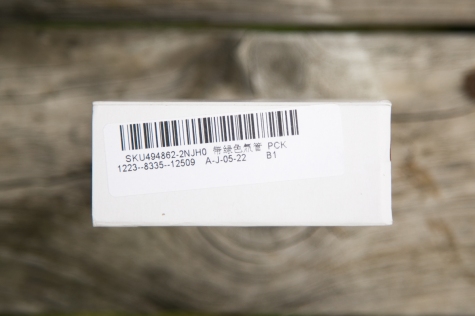 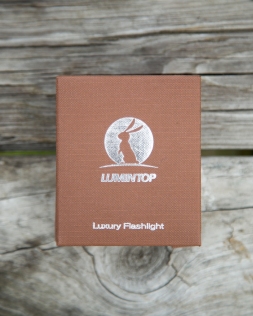 The manual is very simple.  There are some specifications listed, and …. mostly it’s just specifications.  The UI is described but, as this is a very simple UI, it’s not incredibly wordy.  In fact it says simply “Click the tail cap switch to change the mode (Low Mid High Moonlight Circle)”. 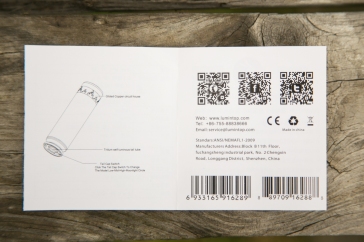 The Torpedo is actually stainless steel, which for some strange reason is a favorite of mine.  It’s thin and small enough that it doesn’t have a terrible weight, though.

A fancy “fire ring” resides at emitter-level on the body.  The product listing mentions copper but I don’t think this is actually copper.  The “gold” has actually begun to rub off too.  I don’t think it’s this gold finish that Lumintop is calling copper, though….  Here’s what they say exactly:

Other listings say it’s just the pill (basically).  Anyway, I don’t know what if anything, is copper on the body of light.  It does get hot fast on high though, which does agree that something’s moving that heat very well. 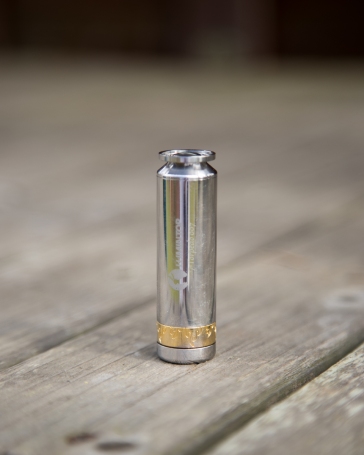 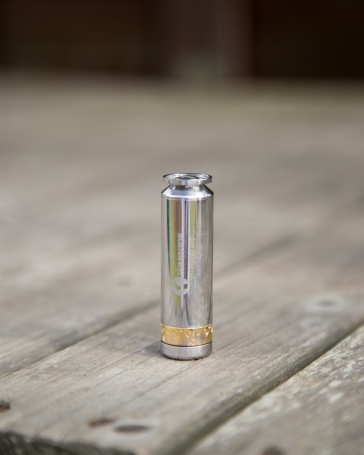 Here you can see the tailcap and the head in detail.  The tailcap is actually in need of some reeding to allow purchase for cell swapping.  I’m quite surprised in fact, that there’s nothing there to help with unscrewing.  Still, it’s not that hard, it’s just hard to know if it’s tight enough to prevent ingress of water.

It’s fairly easy to take the light apart.  The bezel, though smooth, can be removed.  The reflector comes right out, allowing access to the mcpcb.  I didn’t take it apart further, though I did try to unscrew the “flame ring” and had no success.  You can also see that the tail has a spring, but the head has only a donut.  That donut doesn’t cover the brass button, so flat or button top cells should work.  I tested both protected and unprotected and all worked. 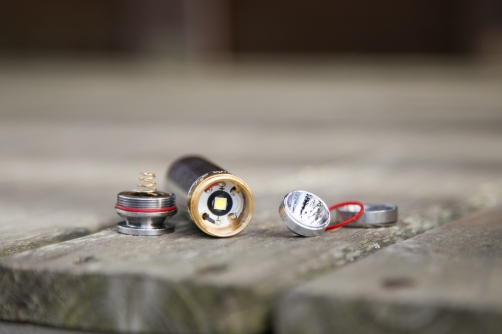 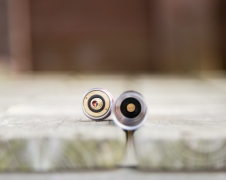 There’s a slot in the switch for a single tritium vial.  This sample was sent to me with tritium installed, fortunately.  I have always been excited about a light with tritium, and I’m pleased to have it.  But I can say that it’s much more dim than I expected (even though I was warned!).  I still like it, and I’ve since added it to other lights (including the BOSS, which I already reviewed).

I could hardly believe it when I noticed this, but the Torpedo is literally exactly the same size as an unprotected 18650.  It even fits into my BOSS tube (but not Convoy tubes!).  Since it’s the same size as an 18650 cell, the dimensions are obviously…. 18mm x 65mm. 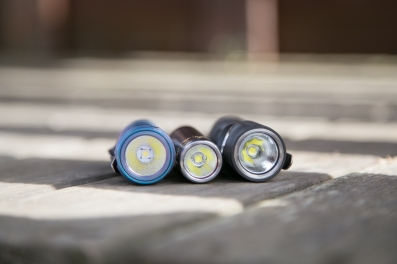 The light comes with a key ring of sorts that attaches on the tailcap.  There is no pocket clip included, nor is there even a pocket clip option.  There’s no magnet, or pouch.

I carry this light deep in my pocket.  I actually carried this light for a while before I took photos of it, so wear is visible.  That’s the nature of the beast.  For me it’s expected, and enjoyed.  I’m a starter on #TeamNoShelfQueen….

I tested the runtime, and cooled the light with a fan for [most of] that test.  Runtime on High terminated at around 3.5V.  Here’s the graph of that:

Nothing spectacular, but the runtime does hold very steady for about 40 minutes after the stepdown(s).  Temperature does seem to creep up, however.

One tail switch operates this light.  And while it might seem like a forward clicky, it’s actually an e-switch.  Unfortunately there aren’t any magical additions to the UI due to this being an e-switch.  Not only that, it seems designed to function exactly like a forward clicky, too.  The UI is simple – in fact just exactly like the UI of the TorchLAB BOSS.  Click for on.  If you want a different mode, click off then on until you get to the mode you want, and leave the light on in that mode.

* This category is as yet meaningless since I don’t have a calibrated sphere.  I’m still recording these values, and working on calibration.

The emitter here is a Cree XP-L V5.  The emitter sits behind a lightly orange peeled reflector.  The reflector isn’t very deep.  The beam has a broad spot but not a ton of spill – it’s actually similar to a TIR (which I love) except for the small bit of spill.

The only other available stainless steel cr123a light I can think of is the Olight S Mini.  That’s definitely a fun light.  It’s shorter and thicker than the Torpedo, and lacks a certain…. torpedo…. look.  Both are e-switch lights but the S Mini has a side switch, and a pocket clip, and has the beam profile of a TIR (because it has a TIR!).  Deciding between these two will probably come down to how you’ll actually use it, not the features set.  The Torpedo wins for “gentlemanly carry” type use.

I have another Lumintop almost finished – the SDMini.  A lot of Lumintops lately!  Which is fine, I like them mostly.  And stay tuned on the blog for a few other items that you wont’ see in r/flashlight!