Here’s the first light I’ve received directly from Nitecore.  I’m excited to be working with Nitecore, and hope this is just one of many reviews!  This is the Nitecore SRT7GT.

There’s only one option for this specific light, the SRT7GT, but the SRT line is large; there are currently 6 lights total in the SmartRing Tactical series.

I’m not sure what exactly my expectations were for this light, but regardless of those, I was pleasantly surprised by the light.  I love the light modes, the UV mode and the ramping main mode. And I really like the Selector ring!

Here’s a photo album, a runtime, and some beamshots.

Very typical Nitecore packaging here:  Yellow and black packaging on a cardboard box which is highly printed and has quite detailed info.  Featured prominently on the box is the “5 year warranty promise”.  There’s also a QR code, and some nice photos.

The manual is one large sheet of paper with 8 languages printed.  Each language is one full vertical portion of the paper, and 1/4 of the width, about 2×10″ or so.  Interestingly the bottom of the manual page has “20170322” which I’d bet is the manual revision.  Nice that they keep up with it; I like revisions, and accuracy.  The manual is descriptive, including specs, runtimes and modes, and UI instructions, and some other things like when to change the battery.

The build is what I’d call typical of Nitecore.  I think some might call that a negative, but in my experience (which doesn’t include any teardowns or emitter swaps), Nitecore has been great.  The anodizing is glossy and seems nice and thick.  Threads on the tail end are anodized, but not acme threads.  The head end of the body tube are unanodized, but are acme cut.  This among other reasons means the tube is directional.  The selector ring (more on that later!) is very smooth. I don’t see a way to get it off to lube it (in case that is even possible).  The knurling is great – diamond cut but flattened top, making it not too grabby.  That said, the body as a whole has a lot of texture, making this a very grippy light overall. 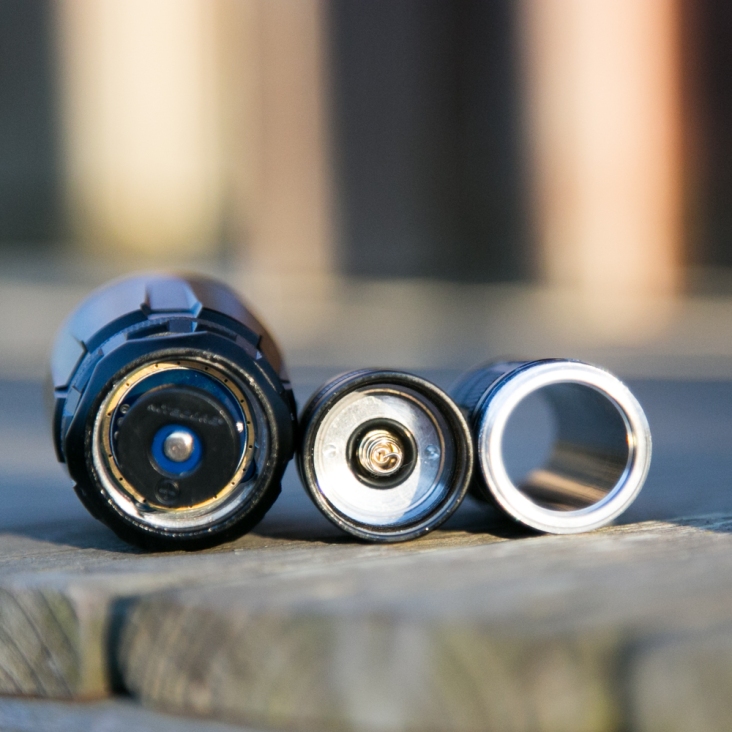 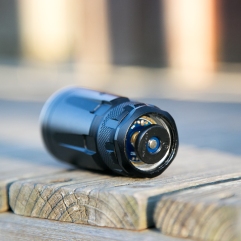 I won’t make any claims about the possibility of an emitter swap on this light but I’d guess it would prove quite difficult.  Being that the reflector has a total of 5 emitters contained therein….  The (smooth) bezel can probably be removed with relative ease, particularly if you have access to a spanner.  The driver side looks to be press fit in.  Speaking of the driver, there’s an interesting little pad on the tip of the spring.  This pad forces the use of button top cells, and also means there’s physical reverse polarity protection.

The tailswitch is serviceable – in fact Nitecore provides a replacement boot.  The mechanism is held in place by a retaining ring.

I won’t call this a “big” light but it is long.  But it has a fairly deep reflector, and throws 450+ meters. 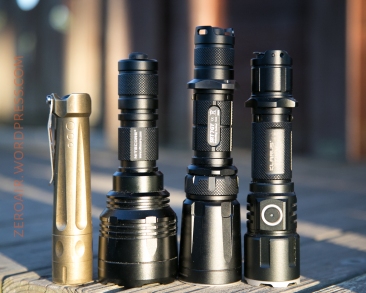 The light comes with a pocket clip, a nice pouch, and a lanyard.  The lanyard attaches on the tailcap.  The light will tailstand but doesn’t feel all that secure while doing so.

The pouch IS directional.  The light will only go in tail first, and sticks out quite a ways when inserted.  It can also be pushed quite far into the pouch, leaving it sticking out by as many as a few inches.  There’s a nice metal D-ring and belt loop on the pouch.

And a tactical ring, which is surprisingly plastic, and completely optional.  It slides over what’s there, so nothing must be replaced to use it.

The clip is in my opinion nothing to write home about.  That said, I find pocket clips on these lights a bit silly.  But if you’re using it on a belt, then this will work well.

The SRT7GT is powered by either a button top 18650, or two 18350 cells.  My testing showed that the output is just about identical (probably within a standard deviation), so I don’t really see a huge benefit to using 2up cells.  But hey you do you.  Who has button top 18350’s anyway?  Not me, but a little magnet made my flat tops work just fine.

I tested this light with a protected Keeppower 3500mAh 18650 (button top, of course).  I stopped the turbo runtime when the blue light in the head of the light (on the outside of the head, not the actual blue emitter) was flashing quickly.  I measured the cell at 2.66V. 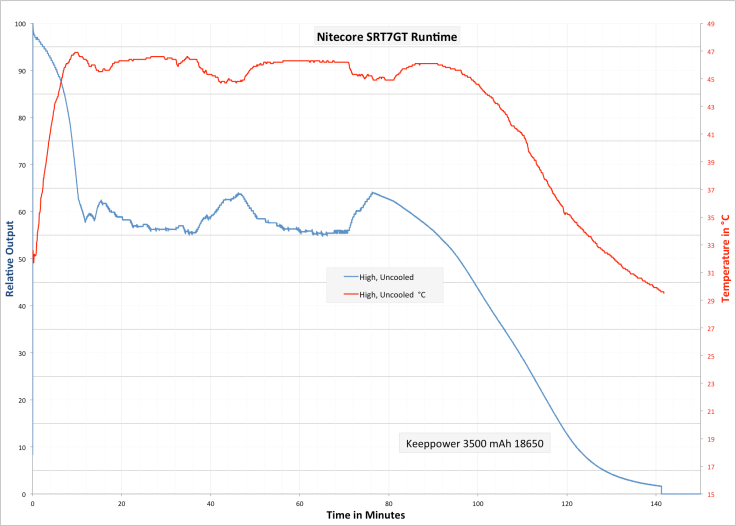 Turbo output isn’t maintained very long, but output does vary with temperature.  Ie there looks to be thermal protection which kicks in around 46 degrees (temperature between head and selector ring area), and as the temperature drops, the output rises again (but not to turbo levels.  I did not test any of the other emitters, but since they’re all single mode, some assumptions can probably be made from the data in the mode table below.  Same with the other modes on the main light – since this is an infinitely variably selector ring light, testing other modes is too non-specific.

There is a single mechanical tail clicky on this light.  There’s also a selector ring just below the head of the light.  The selector ring is knurled and easily twisted, and is about 1cm long.

To operate the light, the mechanical tail clicky must be on, of course.  If you don’t already know if it’s on (ie, it’s not in an “on” mode), address the blue light on the bezel (again, ON the bezel, not the blue emitter inside the light:  if the tail clicky is in the on position, the blue side led will flash approximately once every 3 seconds.  Truthfully this will only happen when the light is in it’s white light mode, with the output dialed all the way down.  In any other mode, the light will be on (red/green/blue/strobe/uv) and in those cases, the blue side led doesn’t light.  That’s a fairly nice feature and well thought out.  If you’re using this light in a situation where you don’t want the loud clicky of the tailswitch, the light can be ON but not lighted, and then the selector ring used to dial up the desired light. 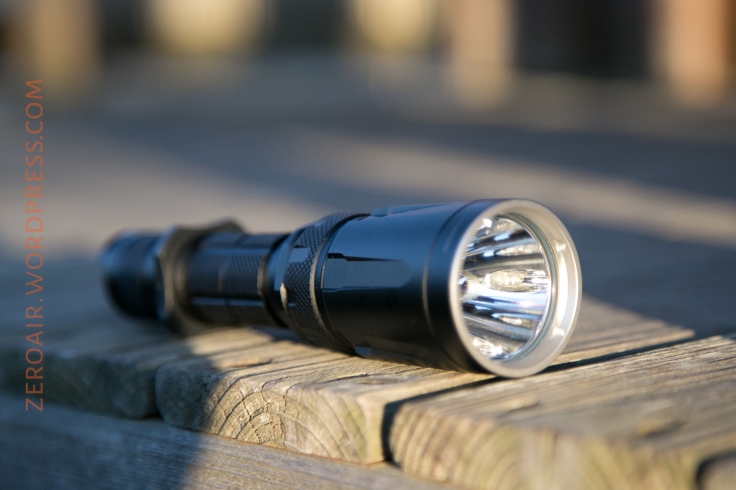 I can honestly say I didn’t know what to expect from the selector ring.  Didn’t know if I’d love it, didn’t know if I’d hate it.  Well I can say that I really do like it.  It’s very specific, which was one of my concerns.  What I mean by that is this:  I won’t remember which direction is one mode or the other.  But the order, with infinite ramp on one end and a different twist length means I can just dial the light all the way to one end (with it off) and find where the long dial of variable is, and go from there.  Since I now know where I start, and I know what modes are in what order, I can turn the light on into whatever mode I desire.  The modes go in this order:

My favorite emitter (ok maybe second favorite?  it’s really hard to say) is in this light: The Cree XP-L HI.  With the smooth and deep reflector, it’s easy to see why this light has such intensity, and throws so well.  Of course there are four other emitters in this light.  UV, which is 365nm, red, blue, and green.

You might expect, as I did, that these four emitters inset into the reflector would ruin the beam of this light. Well, they really just don’t.  They can be noticed up close, but past about 10 meters or so (maybe less), they disappear into the intensity of the light.  If beam profile concern was holding you back regarding this light, I wouldn’t give that another thought.

Up next I have a Ganzo knife, and the Nitecore F2!  Still have a bunch of testing to do on the F2 though, so that one might be a ways out.  And I have a new keyboard for review, too!  Motospeed K87S, which I’ve typed most of this review on.