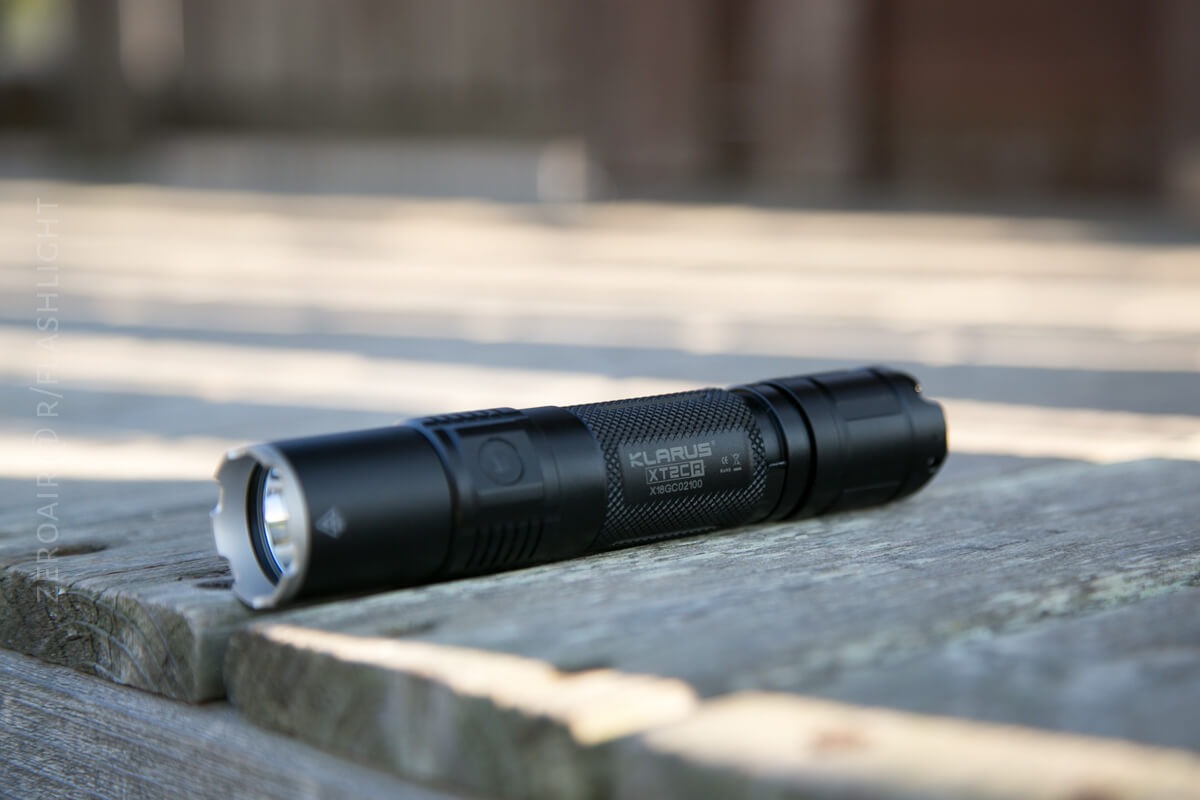 Klarus has a good ‘recharging light’ and ‘tactical light’ game going, and now there’s the XT2CR in the mix.  Read on to see how the light looks, and fares in testing! 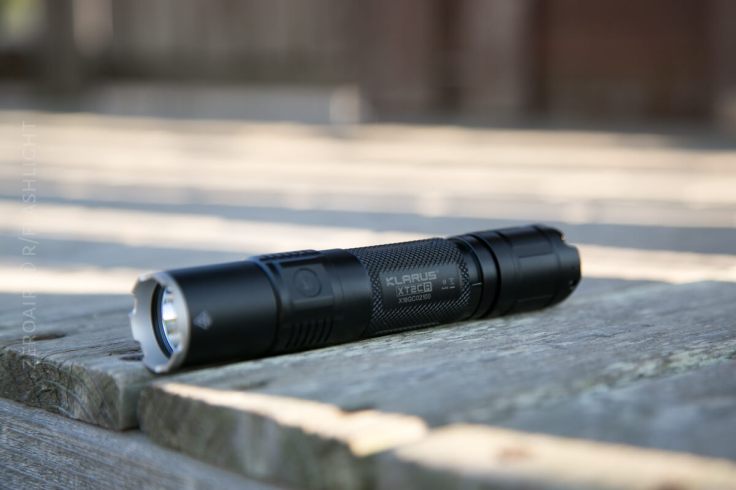 Just this one version of the XT2RC.  This is an update to the XT2C – the added “R” for “Rechargeable” meaning on-board charging has been added.

The MSRP is around $98, but the street price seems to be in the $75 range currently.

Very solid light, and if I’m being frank I quite like the look of it.  It’s more than about looks though, and it’s a good performer too.

Finally remembered to take the cell out of one of these lights for the photo. 🙂

The package is a display-ready no-window red and black cardboard box.  It’s very printed, with most features and specs right there on the box.  The light itself rests in a plastic tray. 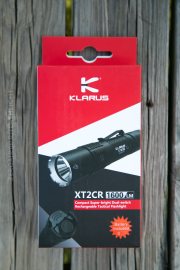 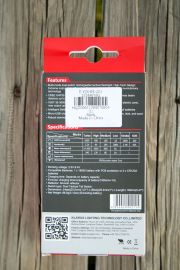 Here’a link to the PDF manual.  Really, really appreciate companies including pdf manual on their website!!  Below you may see a photo of the manual.  I’m pretty satisfied with the manual.  It’s descriptive, has a flow chart UI, some photos of the light and all the necessary info on this versatile light.

The build quality of the XT2CR is super.  It’s a very sturdy light.  The body is actually very similar to the XT12GT.  In fact I might even say that these are the same, with different heads.  That light was built well, and this one is too.  This is a minor point but shows nice attention to detail: The logoing on the body is a very nice muted gray.  Not worn or faded, but just “not white.”  It matches the aesthetic very well. 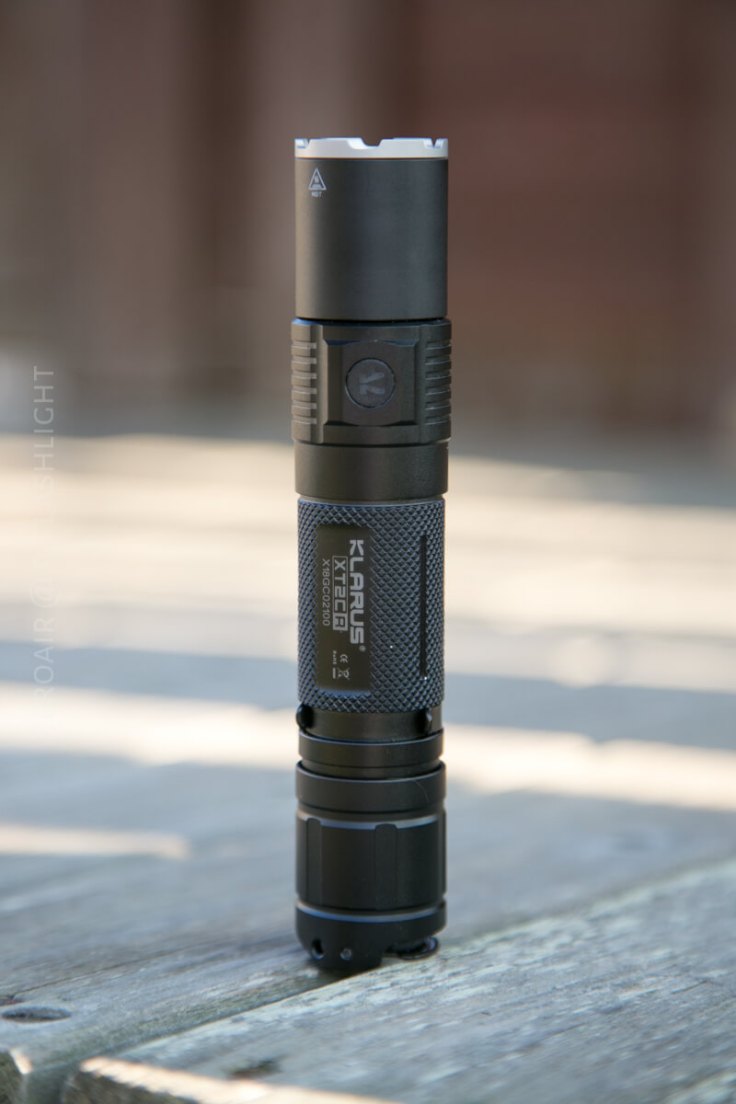 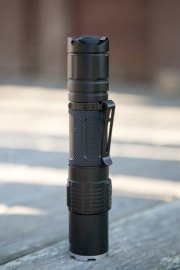 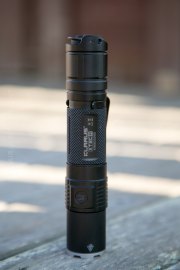 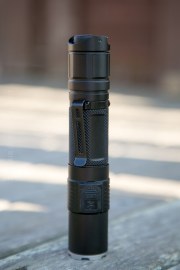 The XT2CR is easy to disassemble, as well.  The tail unscrews, and the switch mechanism(s?) are held in place by a retaining ring (which doesn’t have divots for unscrewing, but still should come out relatively easily).  The threads on the tail end of the body are big square cut threads, and adequately lubed (but ‘just’ enough lube, no extra at all), and are unanodized.  There’s a floating tube inside the body tube, which facilitates charging of any cell – the XT2CR doesn’t require any proprietary cell for charging!

And I hope you can see the springs here.  BOTH ends are very thick double sprung springs.  Very nice springs indeed.

I was able to unscrew the bezel off the head, and the reflector housing off the head, but I wasn’t able to remove the head from the body.  This does mean that the light could easily be used as a mule (though temporarily, since the emitter and threads are unprotected in that setup).

The XT2CR is both long and girthy.  Again, this matches the body size of the other lights in this XT2 series, and as I think I said for those, I like that because that’s why these lights don’t require proprietary cells for charging.

The light comes with a nice nylon pouch.  It’ll fit into the pouch bezel up or down.  The pouch has a nice d-ring, and two loops for belt placement. 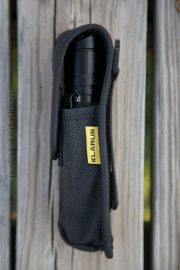 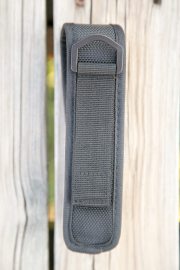 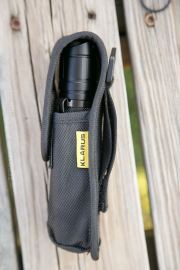 In the photo below can be seen the removable pocket clip, but also note the hole on the tailcap by the Primary Switch.  That’s the lanyard connection point.  The lanyard could also be connected to the pocket clip, but that might not be the best idea with a friction clip, even though it’s quite snug.  (And by “quite snug” I mean that while I can rotate it around the light, I wasn’t able to move it off the light by one single micron.) 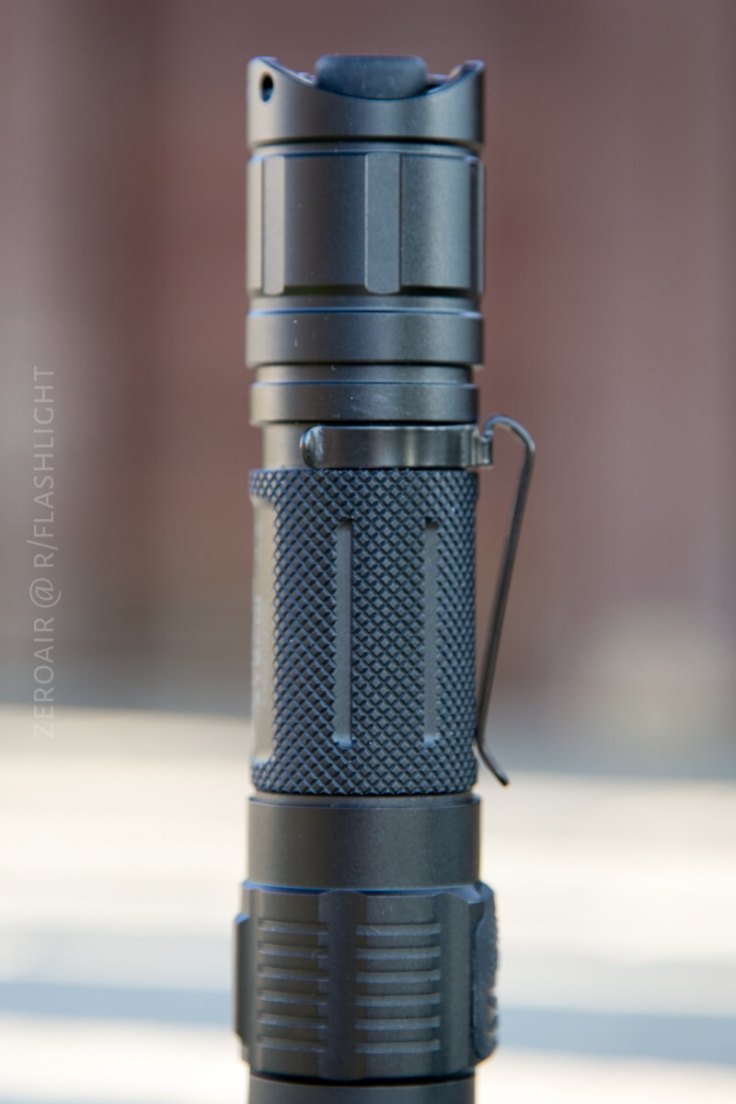 Klarus provides the cell for this rechargeable light, even though it’s not a proprietary cell.  The cell doesn’t actually say on the body, but it’s a protected cell.  And a button top.  The part number (in case you want to replace) is 18GT-36.  Now, Klarus wrongly claims that this is a 3600mAh cell – we know that’s not true because those don’t even exist yet.  But it does seem like a good cell regardless.

The light has on-board charging, which is done by a micro-USB connection near the head on the side of the body.  Just a regular micro-USB.

There’s also a non-switch indicating light on the opposite side from the charge port.  This is used for many things, including during-charge notifications.  Here’s what it does:

When the light is turned on, the little “K” lights to indicate cell charge, as follows:

During charging, the indicator light works as follows:

Note: don’t charge 2-up of any variety cells (in this light or any light!) 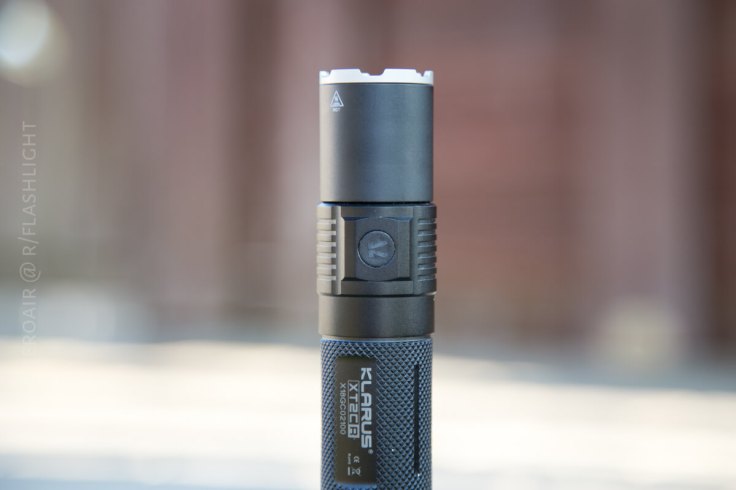 I performed a runtime, and it’s got some unusual characteristics.  Note though, that even though it’s labeled “Uncooled”, I did actually have a fan running at the light.  Sorry for that mistake!  I’ll try to get an updated file for there.

After the drop from turbo, the light vacillates between ~50% and ~85%.  It takes a few minutes to make this cycle, but I do think this is something you’d notice in daily use, and extended uses on turbo.  I can’t really say this output is intended to control temperature (that’d be a first) (and also the temperature doesn’t really seem to be responding to that change in output anyway). 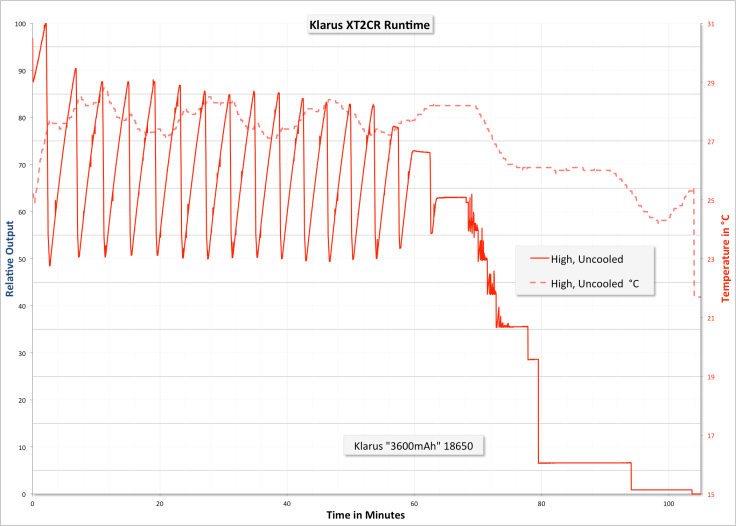 The chargetime of the Klarus-provided “3600mAh” 18650 can be seen below.  Klarus claims 1A charging and the light does start around 1A, but never really reaches it.  Current slowly drops during the Constant Current phase, until the CV phase kicks in.  There’s a slow trickle charge supplied after the cell reaches 4.2V.  We can note here that the capacity is nearer 3300-3400mAh than the claimed 3600mAh.  Overall, this is good charging, and I’m satisfied with it.

First thing to note is that there are two entirely separate mode groups for this light. One is the “Tactical”, the other is “Outdoor”. The light ships in Tactical Setting; here’s how to switch between them: With the light off, hold the Mode switch. After ~10s, the light will begin to flash. (This is subtle in Outdoor group (where the mode switch enters Low) but not possible to see in the Tactical group because the Paddle switch activates strobe. Best bet is to just count “11 Mississippi”, and then do the next step: Click the Primary switch. And now you’ve changed the group. There’s no confirmation you’ve done so. Just turn the light off, and hit the paddle: if it’s “low” then you’re in Outdoor Group. If it’s strobe, then you’re in Tactical.

Now let’s concern ourselves with the Tactical Group. Here’s a table.

(That’s right, no medium for you in Tactical!!)

And below is a table for the Outdoor Setting Group:

In Outdoor Setting, the UI retains enough of the Tactical feel that it can be a bit confusing.

Klarus chose a Cree XHP35 HD E4 for this light.  I love HI versions almost across the board, and it seems like that’d have been a good choice here too.  The reflector is perfectly smooth, and also quite deep, so Klarus clearly had throw in mind.  That said, this light still get photos out to 240 meters (which hits the claim Klarus makes).  The beam is mostly spot with a noticeable amount of spill.  The profile is also affected by the crenelations on the (easily removable) bezel.  Another note about the bezel – those crenelations are actually quite pointy, and could really be used to strike quite well.   It might be nice for Klarus to include a non-strike bezel for this light, too.

With the reflector and housing removed, the light may be used as a mule.  But there’s little protection, so be prepared!  But this is a useful setup for things like shadow puppets on the wall , to entertain your kids.  🙂 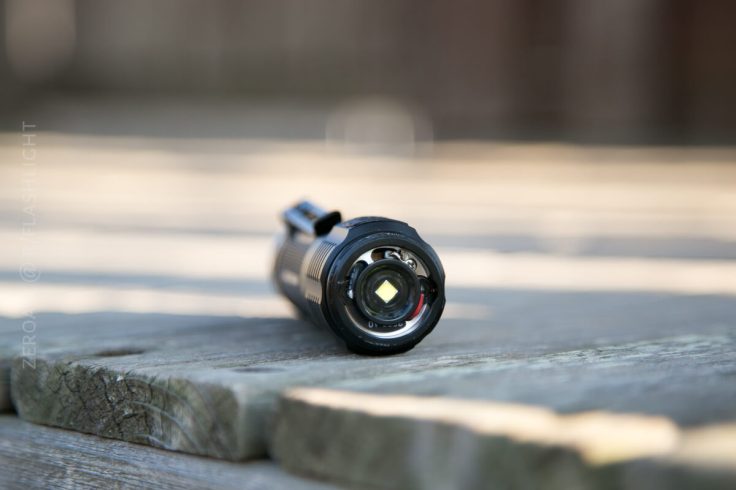 I expect to have the Nitecore EC23 next, with a side of Emisar D1 and a couple of new type posts for me (stuff I may post only on zeroair.wordpress.com, not reddit).