Occasionally I get a wild hair to ask for a bit of a ‘dream light’ for review.  Such is the case with today’s review item.  I sent Jeff at Okluma a message and much to my surprise, he had the perfect light for me! 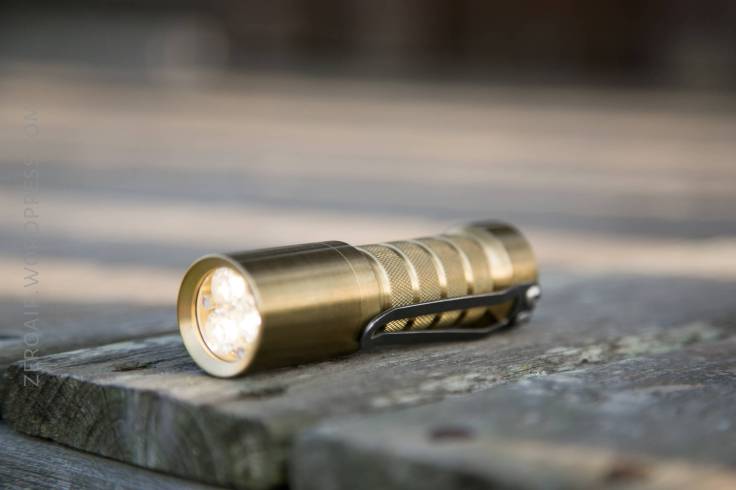 There are a number of versions of this light, in a bunch of metal options and even a couple of driver choices.  The light I received for review is raw brass, and originally had a qlite driver.  The other option (for now) is a h17f driver, which Jeff installed for me after I had a little time with the qlite.

The Brass DC1 price is set at $499.  There is a less expensive option – aluminum, which is $299.  These prices are all pending availability.  I don’t believe anything is in stock at the moment.

There are also some upgrade options.  A copper pill is available ($49).  A programmable driver (h17f) is available ($50).  My review sample has both of these options (though it did begin life with the base driver.)

I really love this little light.  It’s heavy, programmable, and a triple with some glowing bits.  I think there is room for improvement, but I’m very satisfied with it. 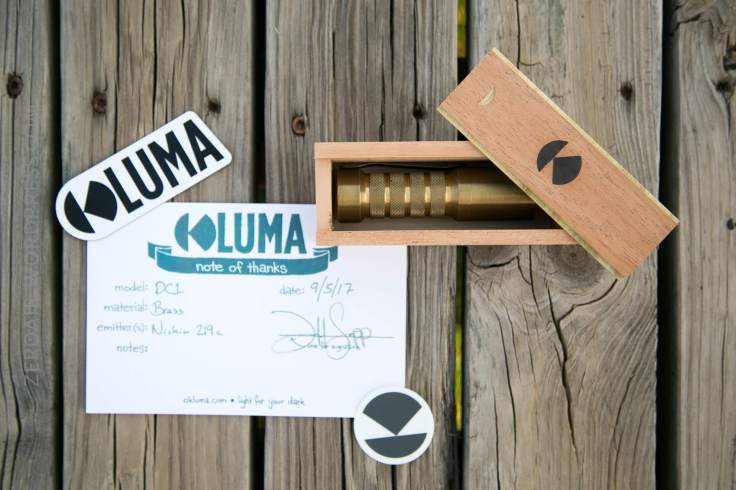 My package also included a “Joey’s T-Shirt” which I have to say, is extremely comfortable.

The DC1 ships in an Okluma printed corrugated mailing box.  Inside is bubble wrap (or a t-shirt for protection, if you ordered one), and the light and card.  The light is in a “cigar box”, wrapped in bubble wrap.

There is no manual.  There’s a specification card included, which has details of the light like emitters, driver, material, and any other relevant info about the light.  But no manual (see later in this review for more on that.)

It should come as no surprise that the DC1 is impeccably built. And it bears saying explicitly:  At this price, one has the right to expect it.

Look throughout the review at the photos of the light and you can get an idea of the quality of craftsmanship in this light.  One more thing about these:  if they aren’t perfect, they aren’t sold.  It’s basically that simple for Okluma.

The knurling on the body of the light is my favorite.  Diamond knurling with a flat top.  It’s plenty grippy, but not also grabby.  There’s also plenty of it.

The head and body do not seem to be match machined, but they do match very well.

Here is the light broken down into it’s main parts.  Just a body, and a head!  Included with my light was this AW 18350, and Jeff said that including a cell is going to be standard practice now. 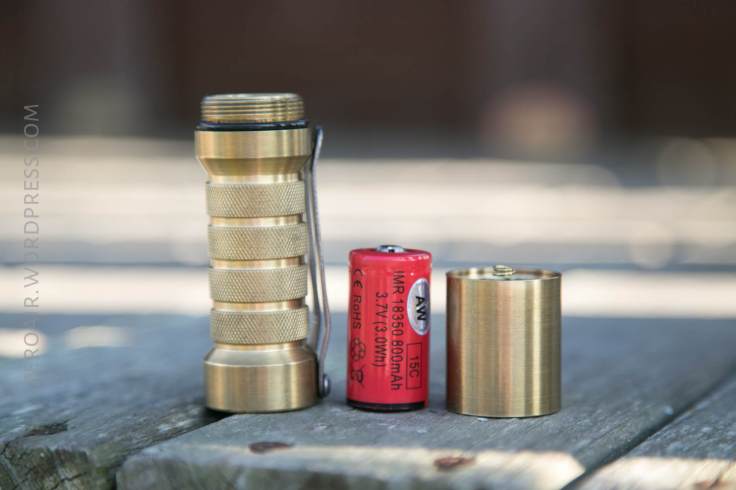 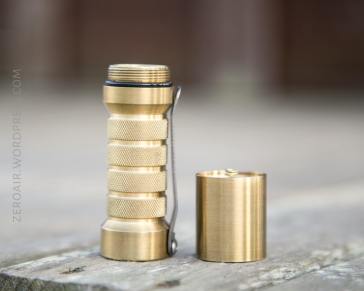 Below, note what is probably my single complaint about the light.  I strongly prefer square cut threads.  I’d really like bit beefy square or Acme threads on this light.  The threads here are just triangular, despite how the photo may make them look.  They are good threads – I was never really worried about cross threading – but Acme would (in my opinion) put this light on another level.  The threads are well lubed, and very clean though, and very smooth.

The next few photos are the head broken down.  This is the qlite driver – the stock configuration.  It’s my opinion that this driver is nothing special.  If you buy this light, you should absolutely upgrade to the h17f driver, or whatever Okluma is selling at the time (as I understand it, Jeff is working on a custom driver right now.)  Or just plan on swapping the driver yourself.

My light also has the copper pill upgrade, which you can see below.  Especially if you upgrade the driver, you’ll want this copper pill as well, for better heat dissipation.  It’s hard to tell it in these photos, but the mcpcb is held down by thermal tape.  One potential improvement for this light would be to use thermal paste instead of the tape.  And finally in this photo group, you may note the glow gasket that’s under the optic.  I absolutely love these things, and I’m glad they are a standard feature.  Much better than tritium in my opinion (though drilled optics are in fact an option for these lights, too). 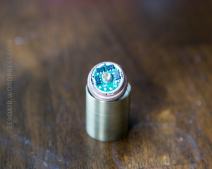 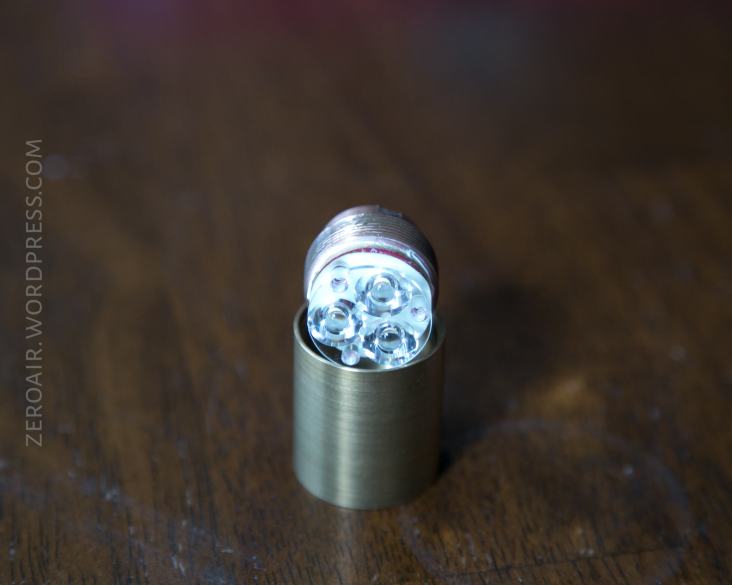 These photos may look like repeats, but this is after I sent my DC1 back to Okluma for a driver upgrade.  You probably notice like I did:  without me asking him to, Jeff cleaned up this tip to tail and swapped the driver.  The new driver is the h17f.  This is my first experience with the h17f, and I have to say I’m extremely impressed. 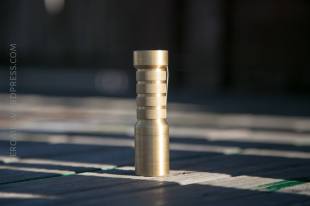 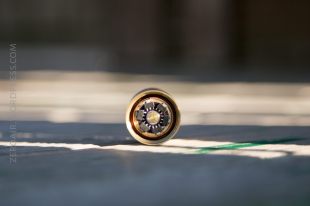 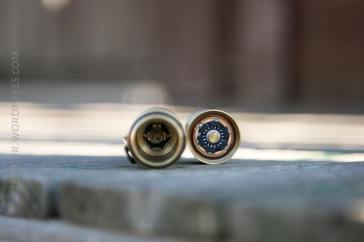 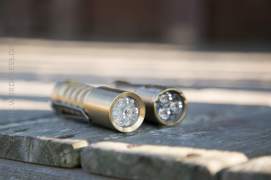 There’s only one option for carry on this DC1.  The clip, which is provided and attached, is a fairly standard clip.  The clip ships very tight, and unlike other similar clips I have (BOSS) hasn’t loosened up.  That’s really a good thing, though.  If the clip is too tight, just bend it out a little and get it exactly where you want it, and then it seems to stay exactly that tight for [indefinite]. 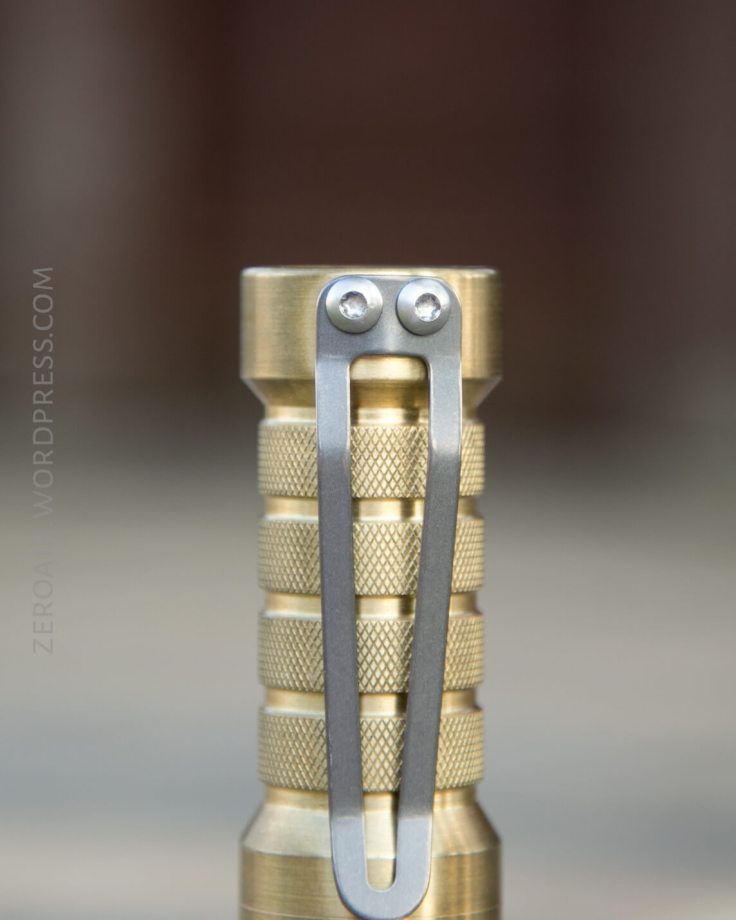 I ran a few runtime test on this light.  Two were with the qlite driver, and one with the h17f.  Notably the output of “mode 24” (that’s the highest mode) on the h17f is much higher than with the qlite.  That makes perfect sense, but it’s worth noting.  You can note a few things about the qlite.  First is that the output and stepdown is consistent.  Probably timed, and with a 1.5 minute run at the highest output.  Note also that it can be reset – just turn the light off and back on and the output will be almost back to full output (within a percent or two).  When that’s done, the temperature continues to climb, though.

The h17f performs differently – the drop from highest output is quick and fairly dramatic.  But we can also see that when cooling is started (not shown in the graph, sorry – but cooling was started at around 23 minutes), the output can increase again. 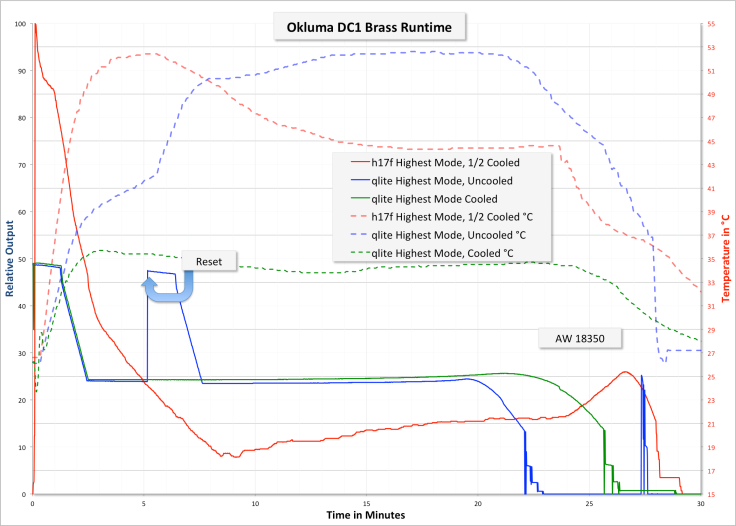 There’s a single mechanical tail forward clicky in this light.

I won’t cover the UI for the qlite driver – it’s fairly simple and with no programming options at all.  Usage of either driver is fairly simple on a forward clicky.  Half click to move through the modes, and fully click when the mode you want is presented.  Configuration of the h17f is quite a bit more involved.  I’ve made a flow chart both to help myself and for presentation here.  This is probably not perfect, and I’d be glad to improve it if changes should be made.

The h17f is ridiculously configurable, and should be able to suit most users.  I went through many of the configuration options, and while it can be difficult, once it’s familiar, it’s quite easy.

The h17f is easier to program on a reverse clicky – in fact I believe the driver is made for a reverse clicky.  But it works quite well on the forward clicky, and honestly, I love it.

I don’t have the mode data for the qlite driver, and the configurability of the h17f would make a chart a little meaningless.

My sample has Nichia 219c emitters, and I love them.  I have a few other lights with this emitter, and while I probably prefer 219b for their rosy tint, the 219c emitters have an absolutely white light, and that’s probably actually better.

The emitters are behind a Carclo optic, and have typical TIR beam pattern.  This is a Carclo 10507, which is a “narrow spot” beam.  However, this is a standard sized part, and could be swapped if a wider beam was desired.

The bezel could be a little more revealing…. By that I mean a thinner bezel around the optic.  This isn’t a negative, just an opinion.

A big thing I did not like about the qlite driver (and a main motivation to upgrade) was that the low mode flickered.  Not in a fun “candle” way, but in a very annoying “the driver can’t regulate the output” way.  That is another reason to upgrade-at-purchase the driver. 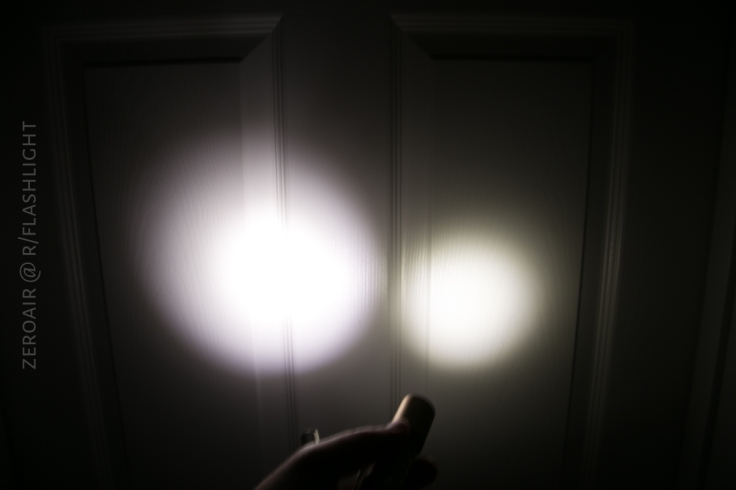 I’d mostly compare this light to other custom lights.  Though in all honesty, that could be unfair to regular production lights.  My only on-hand comparison of this light is the TorchLAB BOSS, which is generally very similar.  They have the same emitters, have the same body material (in my case), and are both programmable.  The BOSS has a secondary emitter, and optical programming.  But it requires a a computer to program, and as of now relies on a secondary website (the website of the driver maker).  The h17f driver does not require that, and is completely stand alone.  The BOSS also offers a 18650 body.  Okluma has been testing a 18650 body for this light, but I don’t believe they’re sold as a set yet.

I have so much on tap right now.  I have a bunch of flashlights – next is most likely the light from Sofirn that everyone’s been reviewing, the C8F.  I could have the BLF Q8 if it’s not already beat to death by the time I get it finished, too.  I even have a couple of non-flashlight related items up for review, as well!