I’ve been a huge fan of the Olight S Mini (the brass S Mini is one of my most used lights!), and this S1 Mini is in some ways, it’s successor.  Yes, it’s from the S1 lineage, but it’s smaller than the S Mini; which is more important?  And now it’s available in High CRI?  I was very interested.  Keep reading to see how I like it now!

There are currently two versions.  A cool white (CW) and neutral white (NW).  The NW is also High CRI (90)!

The going price is $49.95 right now; this is a brand new, just released light, so the price will probably stay around there for a while.

I like this light.  I liked the S Mini, and I like this one more because it has a magnet, and an indicating switch.  The High CRI is a wash for me (per other more detailed reviews, the XP-G3 isn’t really the best).  But I like the light on the whole. 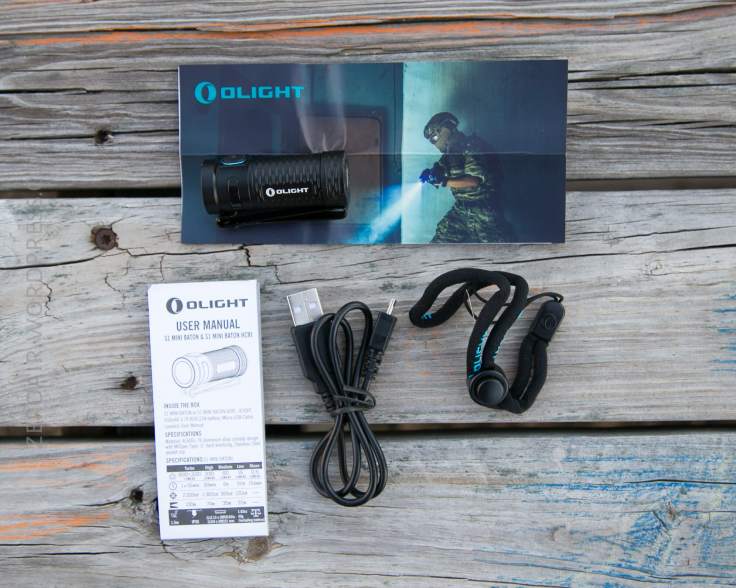 Another typical package from Olight.  Specs, features, a photo.  Nothing new here.  The inside of the package is probably slightly easier to get into than previous models – I believe a similar package once had the head of the light held in place by a spare o-ring? Not this one. 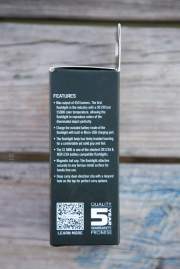 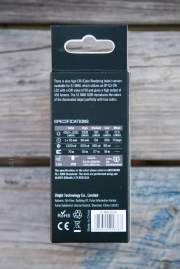 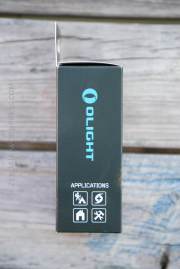 Here’s a pdf of the manual.  I have cut out the relevant parts to English speakers, which you can see below:

The manual is short and in many languages, and the fold is a little user-unfriendly.

Unfortunately the manual does not adequately cover many aspects of the light, particularly in relation to the indicating side switch.

This is a fine little light.  The build quality is on par with other Olights, which is to say, very good.  Since this is an iterative design (leaning heavily on the S Mini), it’s very refined. The threads are very smooth, but of course, the walls and body are thin metal (perfectly reasonable on a small light like this). 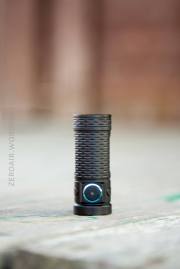 Officially this light weighs 43g, is 54mm long, and has a 21mm diameter body and head.  It’s a small light. 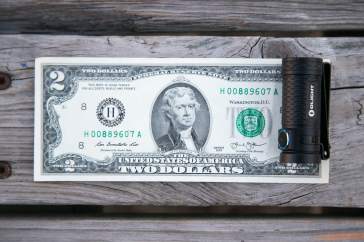 The S1 Mini has an updated pocket bi-directional clip.  I don’t love this style because of the (very minimal) extra depth they add to a light.  However this clip works so well that the clip style didn’t bother me.  One thing I do not like about this clip is that the tip is rounded, and thus the light doesn’t like to rest on the clip.  Strangely this is how I most often use my lights (as it’s a very specific and consistent way to place these lights on a surface.)  Works well with the brass S Mini (which I use often) but not well at all with this one because of that rounded tip.

The clip also has a hole at the apex, where a lanyard may be attached.  A lanyard is included.

Something missing from the S Mini was a magnet, and the S1 Mini rectifies that.  I found the magnet in the tailcap to be fairly weak, however, and not quite as useful as I’d want it to be.

Olight provides a cell for this light: a 650mAh 16340, which has a built in charge port.  I think these charge ports are a bit silly, but if the port doesn’t diminish the cell capacity much then in the end, they’re fine with me.  This cell is meant to live in a light – there’s no protection around the micro-USB port whatsoever (it’s not waterproof).  But great for living in the (IXP8) S1 Mini.

The cell goes into the light with the positive connection toward the tail.

Normally hidden by the pocket clip, but seen below is a silkscreen logo indicating the cell direction.  A good reminder, but probably not something you’d notice unless you remember it is there, and in that case just remember which way the cell goes. 🙂

Runtime on Turbo is as follows.  Stepdown is quick and heavy, all the way down to 50% output.  Temperatures stay fairly low, however.

Like the S Mini, the S1 Mini does not have Low Voltage Protection (LVP).  Or technically it does but the floor is based on primary cells, which will cause the light to turn off around 1V.  This is much too low for the 16340, so be aware of the indicating side switch, which will be useful in this regard.  Note that the behavior of the indicating side switch is ill-defined in the manual.  Based on my testing, the indicator turns on solid around 3.0-2.6V, which is accompanied by a stepdown (to low or moon light), and then the light shuts off around 1.4-1.2V.  Not in the manual, but on the site, the product photos indicate the red led will be lit solid when the “power is below 10%.”

Even though this 16340 cell isn’t specific to this light, and is just a general Olight product available separately, I went ahead and tested it.  So this chargetime is for the cell not the light.  Certainly noteworthy is that the cell tests at a capacity of around 700mAh, which is excellent.  But it does charge at a fairly slow rate of 0.5C, or 350mAh.  Acceptable, anyway, and better for cell longevity.

There’s a single indicating side switch on the S1 Mini.  This is by feel, much like any other Olight side switch, but with the addition of the indicator in the center of the button.  As stated above, the manual doesn’t seem to cover what the side switch will indicate, but it should be reasonably clear if it’s any good at all.

The switch itself is fantastic.  Just like all the other Olights with this switch.  It feels exactly the same, which is great because you can know what to expect. 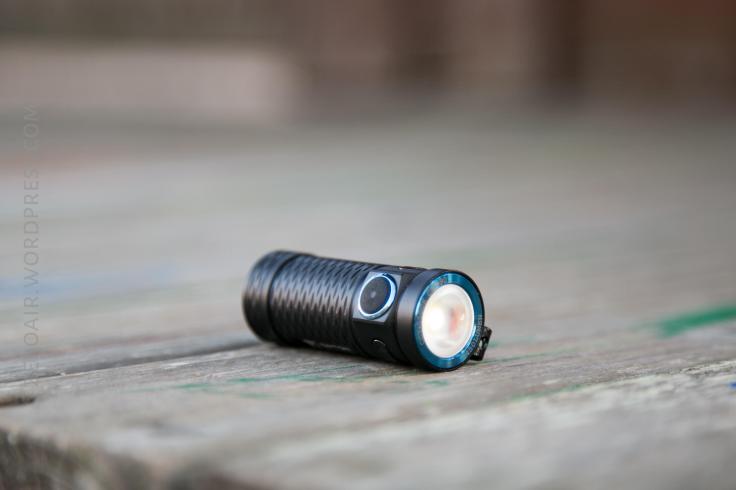 Here’s a table for the UI.

* Moon, Low, Medium are memorized.  High and Turbo can be activated but will revert to medium after 10 minutes.

A huge thing Olight did for this version was to offer it in High CRI.  This emitter is a Cree XP-G3, and other reports are that the High CRI-ness of it is overrated and the quality of light output is not up to the hype.  For me, in my daily use of a light like this, whatever the tint and CRI are, they’re good enough.  Could they be better?  Sure, they could be Nichia.

The Cree XP-G3 resides behind a cloudy TIR, which smooths the beam out nicely.  In fact this TIR beam profile has “softer edges” than most.  I happen to like TIR optics a lot, and this cloudy TIR doesn’t hurt the beam for me, but it doesn’t really improve it, either.

Below is easiest to see the complaints against the High CRI XP-G3: Green tint.

I don’t believe there’s another clicky this small, with a magnet, “on-board charging” and an indicating side switch. The only other thing even close would probably be the S Mini, also made by Olight.

What comes up next is just a matter of what light culminates next.  I might fire off a quick shot of Emisar D1S, and hopefully get another light or two in this week?  Lumintop Ant Brass, maybe?  And I definitely have a few blog-only projects that I’d love to wrap up, so stay tuned there too!