After [ages] of hearing a user extol the virtues of the Imax B6 charger, I requested one from GearBest.  It was quite fitting, since I also have an RC car in for review from GearBest. I am excited to plow into this charger.  As it’s my first hobby charger of this type, I’ll probably have to learn a lot along the way.

Prices are just a little bit all over the place, but for the full package, they seem to settle around $45.  There are package versions.  For example, the bare unit can be purchased (which is what I have here), as can just the wall wart.  And those can be purchased together, too.  There are even accessories available, like a WIFI dongle, and a temperature sensor.

This is a fantastic hobby charger.  Worlds better than the wall wart / balance charger that came with my remote control car.  It’s even useful for cylindrical cells.

Caveat on this review is that I’ll

Unlike the other SkyRC product I recently reviewed, this iMAX B6 Mini ships in a very small box.  It’s a nice thick box with a lot of useful information printed all over, and a GearBest inventory sticker right on the top, front and center. 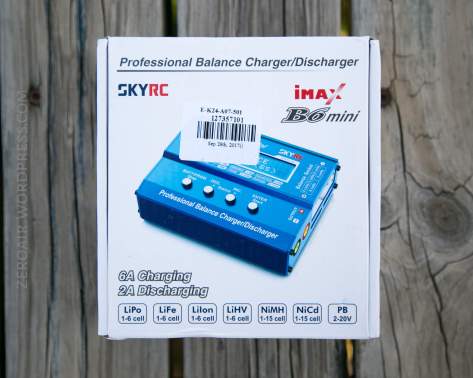 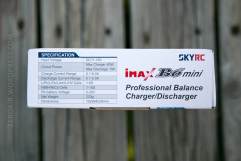 A direct link to the pdf manual may be found here.  This is a quality, full color manual.  It’s also quite long (28 pages).  The manual is worth a read before using the charger…. But the charger is fairly straight forward if you’re electronically inclined at all.

One final point about this unit, from GearBest.  There are certainly fakes of the SkyRC products on the market.  There are even units being sold from a single store, “Genuine” right beside “Copy” units (fully disclosed, at least).  I can confirm that the unit I received from GearBest is in fact a genuine SkyRC product.  There’s a QR code label on the back of the unit itself (not the box), which can be scanned, and will take a user to this page, below.  This is the SkyRC verification page (confirmed to be the same page reached from SkyRC’s page).  So, just an added bit of trust that this unit is the real deal. 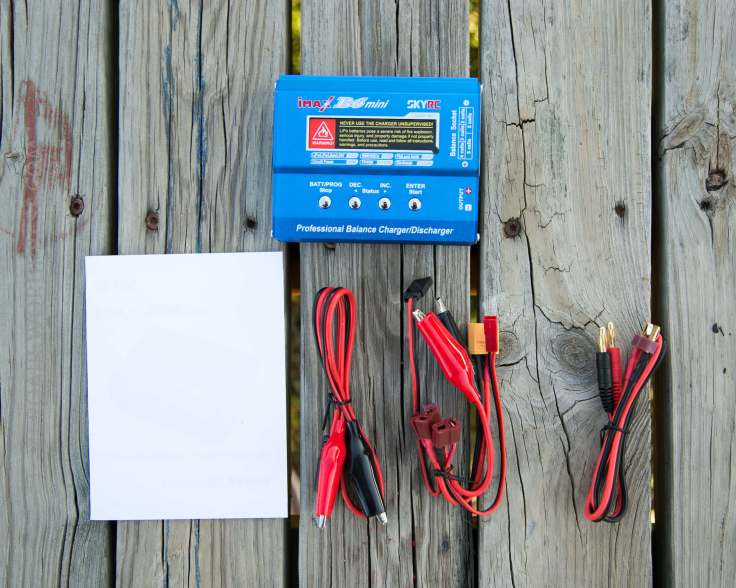 The B6 Mini is a nicely built, compact unit.  It’s quite simple, with just screwed on ends, and two halves that mate together. 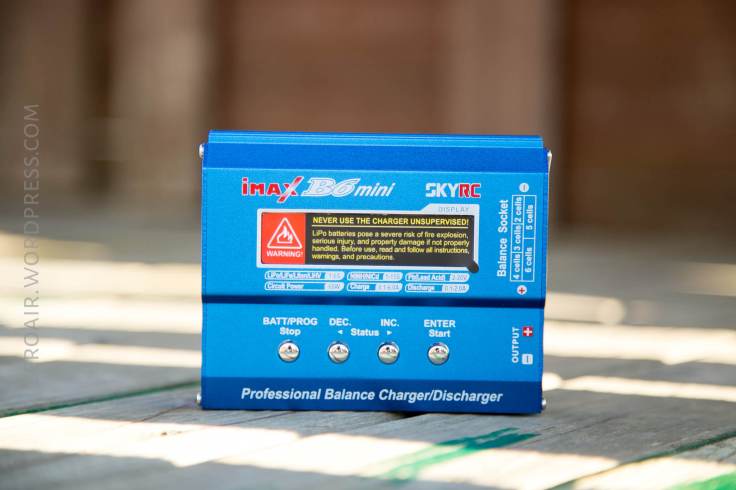 The buttons are a little rattly, and do feel a little cheap.  They are plastic, and just extensions of bog standard pcb buttons.  (You’ll see this in the teardown).

The fan has a nice built in cover, the ports are all lined up properly, and there’s ample cooling ports and fins all over the unit.  The bottom even has nice rubber dome feet (and more cooling ports!) 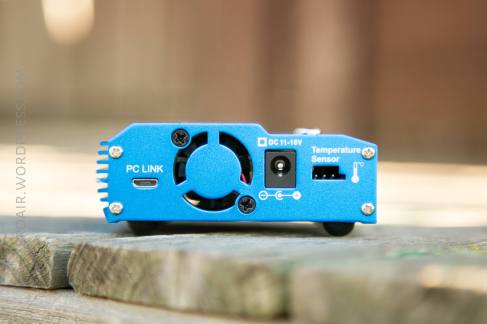 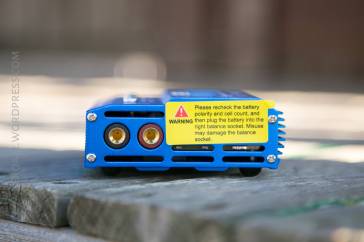 I don’t normally conduct a full teardown on units like this, but in this case I’d hoped to flash a custom firmware to the B6 Mini, which would require taking things apart.  So I did, and with some help I discovered that the B6 Mini doesn’t use the same processor as the B6, for which there is advanced custom firmware.

Here’s the processor.  It’s a MegaWin MA84G564AD48.  Here’s the pdf datasheet, which I’m not nearly smart enough to read.  Maybe someone will eventually port cheali charger firmware to the B6 Mini, but for now, that’s not an option. 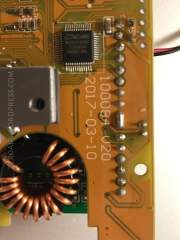 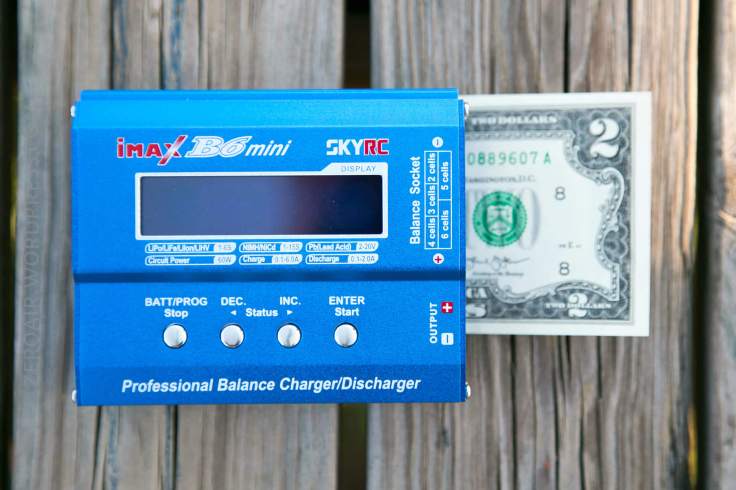 This is a 60W charger.  I won’t say it’s small for that (maybe not small) but there’s a ton of functionality stuffed into this box.

The iMAX B6 mini receives power through a barrel plug.  I was lucky in that I have another SkyRC product using the same barrel plug, and was of a sufficient voltage and power to run the B6 Mini.  That product is the MC3000, and I absolutely love that charger.  But that’s a cylindrical cell charger, and the B6 Mini is not.

So a user will use a wall wart terminating in a barrel plug. This must be a high quality wall wart, but the specifics are broad.  The B6 Mini requires 11~18V DC input.  The MC3000 ships with a 15V, 4A wall wart, and that’s what I used in my testing of the B6 Mini.  This wall wart worked very nicely.  You’ll want a high current adapter, too, as this is a 60W unit.

As with the MC3000, be aware that it’s advisable to connect the barrel plug to the unit before connecting the AC/DC adapter to the wall.  This prevents shorts that can happen with the barrel plug being connected under power.

Now power in has been covered, how does one get power out?  There are two banana plug binding posts in the side of the unit.  To these are connected the necessary power output plugs.  If charging a battery pack which requires balancing, a balance plug is connected to the same side, in the appropriate slot (of 5 choices.)

Note that while it would be an amazing bonus, these 4mm connectors can’t just output power willy nilly.  Of course, SkyRC would probably need to add a bunch of stuff including a potentiometer to this unit to let us use this as an actual bench power supply but wouldn’t it be cool.  Absolutely no fault to SkyRC for not having this, but as this is a power supply, being able to tap into the available voltage range (not boost or anything) would be fantastic for do-it-yourselfers, messing around with hobby electronics (like flashlights!).

When I first started this review I didn’t think I had a good (logging) means to test this charger.  Well after this review started, I finished a side project, and realized that I did in fact have the capability to test.  So here’s a test, charging a 7.4V LiPO at 3A.  My logging test meter maxes at 3A so I’m not sure how accurate it is as current approaches 3A.  But this battery I was charging wasn’t completely depleted, and the test soon switched from CC to CV anyway.

Regardless, I think this is interesting and useful information.

As covered in the Power section above, there are 4mm binding post plugs, for 4mm banana connectors – that’s from where the man power comes.  There are also 5 balance connections, for your power pack needs.   I only have 7.4V 2S packs, so I used only the top right option.  But these go all the way up to 6S!

You can see these plugs are color coded – black is negative, or ground, and red is positive.  The balance plugs are of course, JST-SH plugs, and are all situated with positive and negative in the same orientation as the plugs to their left.  Negative on the left, positive on the right.  They’re directional and only fit one way, anyway.  (Each has two little prongs, and the male pins are actually offset from center, so the female side will only fit one way.) 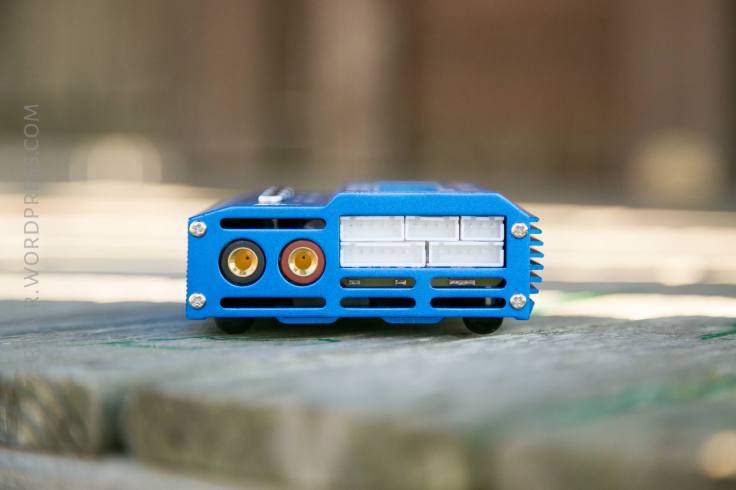 The other side of the unit has connections too!  Of course there’s the power-in barrel plug, which is conveniently labeled “DC 11-18V” and has a polarity indicator, too.  There’s also a PC LINK connection (which we’ll cover later) and a temperature sensor.  A temperature sensor is not provided, but these can be obtained for around $2 from eBay and the like.  For $2, it’d be very nice to have this included.

From the “what’s included” section above, here’s what the list of provided cables:

And you can bring your own!  As long as it’s a 4mm banana plug it’ll work (provided you can convince the software that things are copacetic, that is.) (Again, it’d be nice if we could just program the unit and have the power live at the end of the banana plugs….. I do see why that’s not really supported [safety], however.)

There are four primary buttons on the iMAX B6 Mini.  These buttons “do what buttons do.” – Adele*.

I recommend consulting the manual to see everything that one can do through the menu and these buttons, but generally (and per the manual):

SkyRC is great about expanding the functionality of their chargers by allowing PC access.  In this case, provided by a micro-USB “PC LINK” connection on the side of the box.  Once connected to a computer, an with the proper software installed (you’ll have to click the “softare” tab, I can’t link it directly), a user may load programs (20 choices) and edit those programs (or build new from scratch!), for charging cells.

Here are some examples of the possible settings that can be manipulated.  Programs can be built for 1 to 6 cells, many chemistries, charging/discharging/cycling/etc. 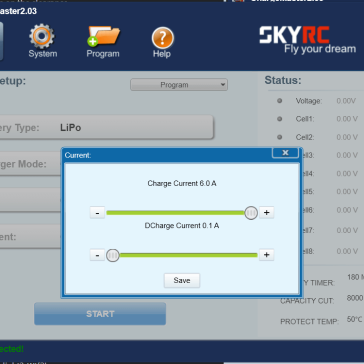 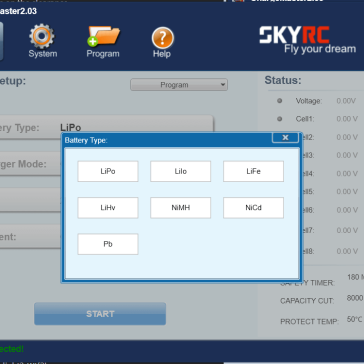 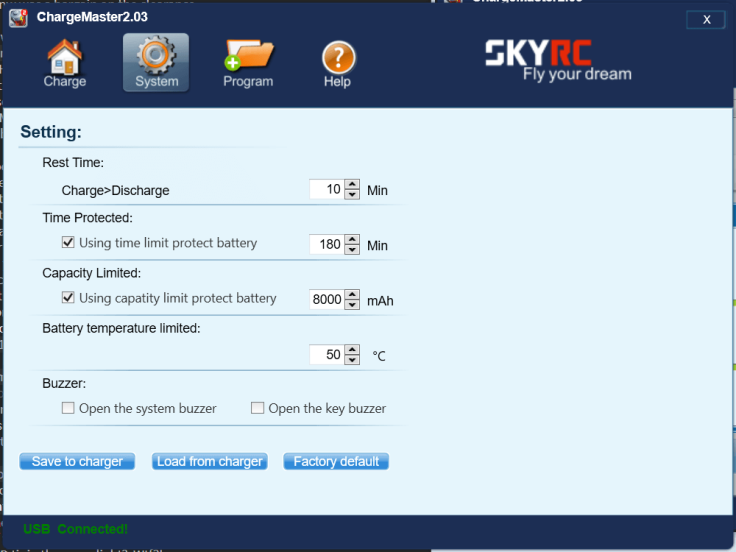 It’s very nice software.  It even makes graphs of the progress.  Unlike the MC3000, the buttons and built in menus are very easy to navigate.  For my personal use, I’ve leaned toward just using it through the button menus on the device, not over PC Link.

Upgrades that would be awesome.

I’ve pushed the JETBeam T6 so I can do another runtime and some work in general.  And I hope to have another non-flashlight item or two in the coming weeks!! Stay tuned!