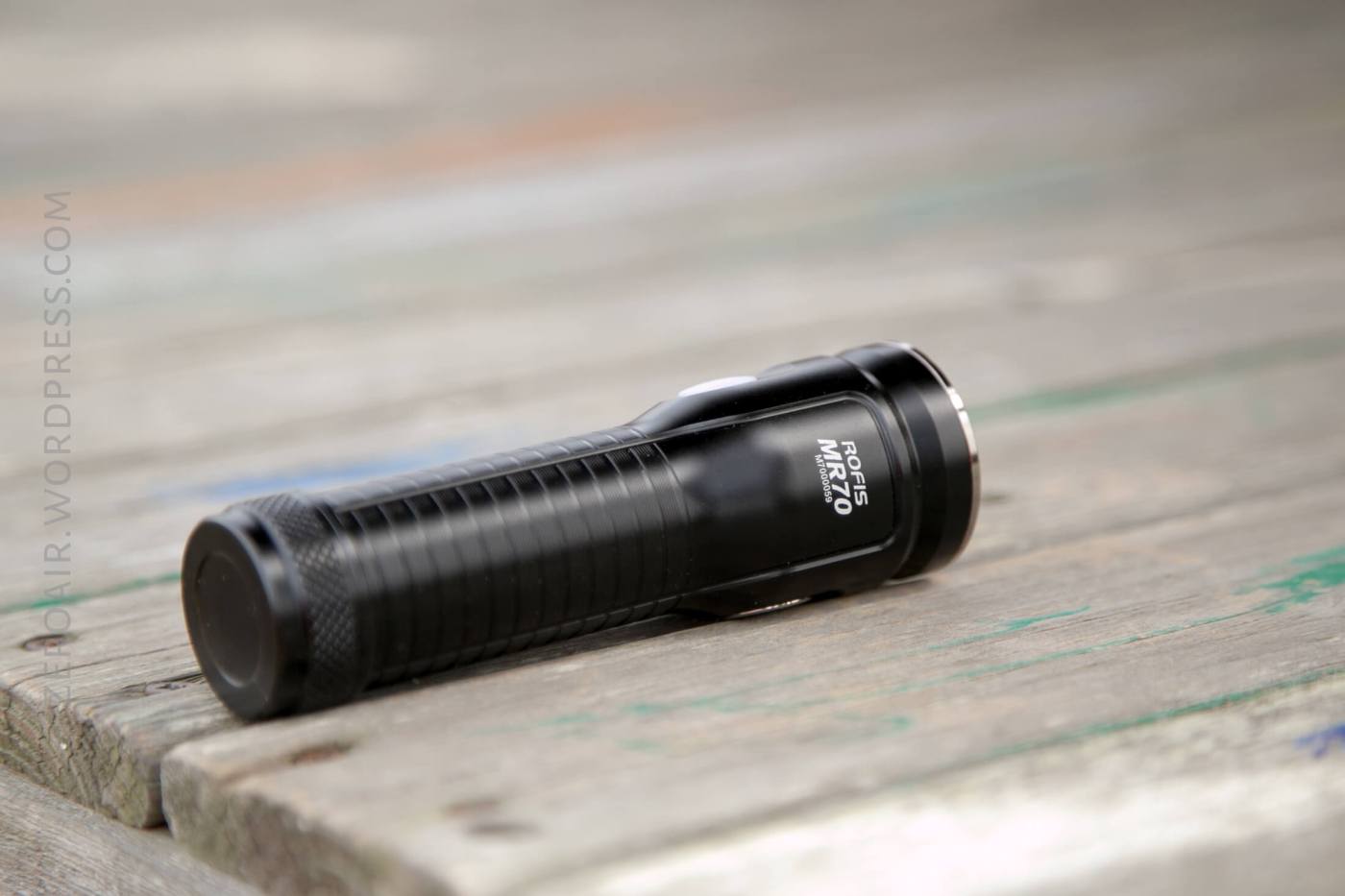 Rofis is a new (ish) brand to me, and tends to bring new and interesting things to the table.  This is a reasonably small 26650 light, with a Cree XHP70.2, on-board charging, and can act as a powerbank!  That’s a lot of features, so let’s see how well they actually work.

As far as I can tell, there’s only one version of this light.

While a large for pocket carry, this will be an absolutely fantastic bag/travel light.  Big lumens, powerbank and on-board charging.  Tough to beat that package!  And the energy of a 26650 makes it a reasonable power bank! 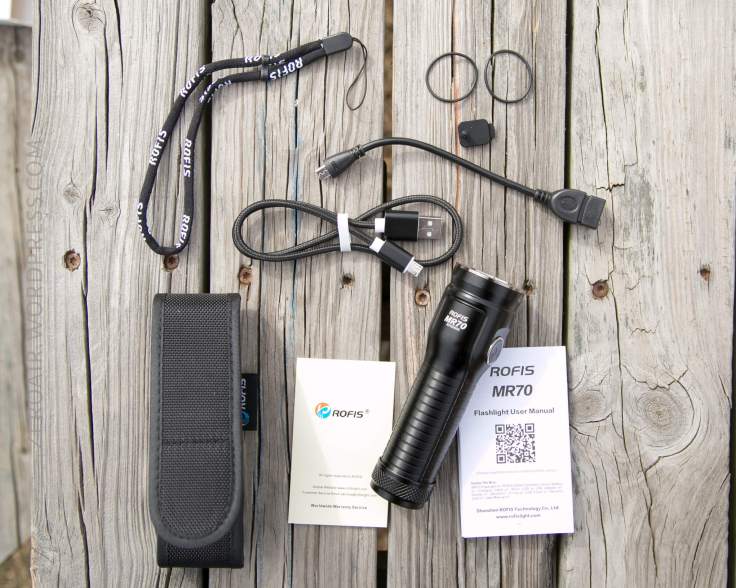 The box for the MR70 is a small (for the light) cardboard display-ready box.  It’s heavily printed, with runtimes and specs, and other information.  The light and goods are held in place in a plastic tray. 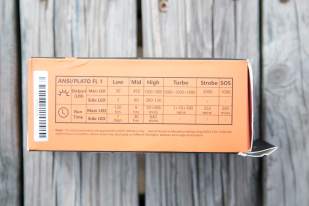 The manual is fine, but lacks some of the graphics I like to see on manuals.  The chart is the same as is on the back of the box, but added in the manual is some operational information.

This light has such an unusual look.  Sure…. it’s a black flashlight, and looks very flashlighty…. but …. it has shiny anodizing.  The knurling isn’t normal knurling.  The body is flared in a non-standard way….  It’s just different!  (Whether it comes across in photos or not, trust me, in hand it just seems different.)

Really the light feels great in hand.  It’s not large for a 26650 light, though not very pocketable.  Much less is it big for a light with on-board charging and a secondary emitter, and one that can act as a powerbank. 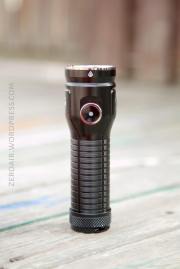 The bezel should be removable but I didn’t push my luck.

The tailcap does have more usual knurling, and this helps with cap removal for cell changes.

I really like the body of this light.  It’s probably well known that I don’t like aggressive knurling, and this is certainly not aggressive.  I won’t say it’s as grippy as regular knurling but it’s just fine for me. 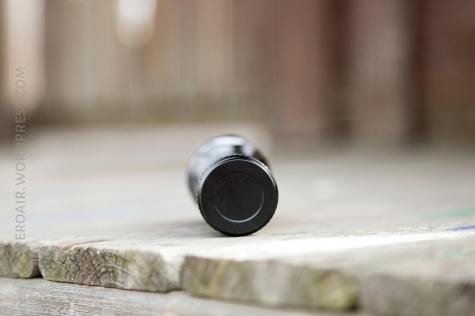 The threads are small, anodized, and well lubed, and fairly smooth.  They’re square cut, too.

The tailcap has dual springs.  There’s a fairly soft but thick external spring, and a thinner but much stiffer internal spring.  This setup provides a lot of contact between the negative terminal of the cell and the light.

The positive contact of the light is an unusual brass button.  I can’t see down in there very well but I believe the spring has a cantilevered brass cap over it.  It’s a setup I’ve never seen before, but it seems do be the best of both worlds – a brass button for great contact, but a stiff spring to keep the cell well contacted and snug.  I can say – whether it’s better or not – the light stays on through a bit of solid abuse, with no disconnects.

The length of the MR70 wouldn’t really be out of the question for daily carry, but the thickness probably is.  It’s just barely longer than the BOSS 70, but much thicker.

The nylon pouch that ships with the MR70 is quite nice.  There’s an actual metal d-ring on there, and a metal snap.  The light will fit in either orientation, but is most comfortable bezel-up. 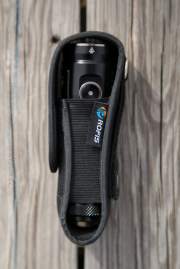 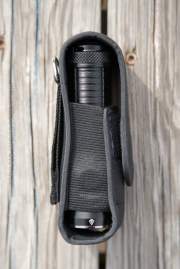 The included lanyard connects on the tailcap, through a small hole.

Rofis includes a single 26650.  It’s a flat top unprotected cell, and labeled as 5500mAh.  The highest capacity-rated 26650 I could find was 6000mAh, which was news to me.  That likely means that the 5500mAh rating isn’t outside the realm of possibility.  (The highest capacity I’d seen was 5000mAh, so this was a surprise).

The cell seems good quality, and works well in the light.  The light won’t be particular about cells, though, and should work fine with any type 26650.  It should even work with 18650s just fine too, but I’m not sure how securely contact will be made if the cell gets bumped around. 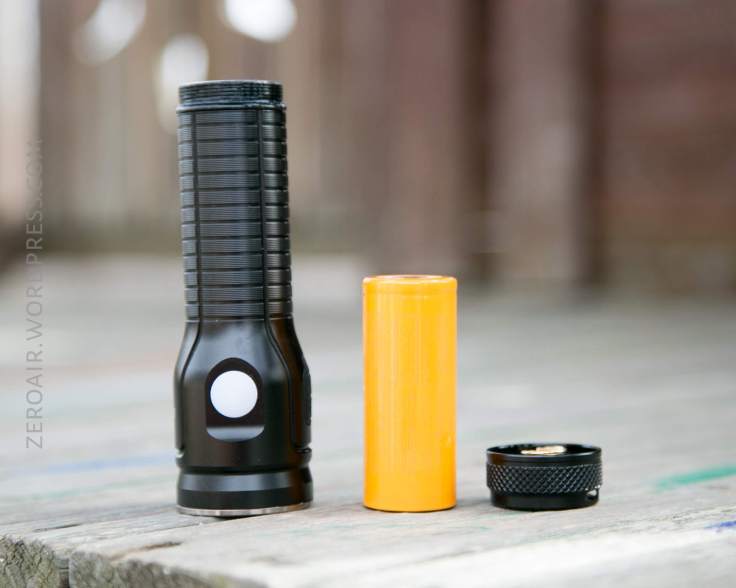 Here’s a runtime on Turbo.  It’s possible to kick the light back up to Turbo at any point, but the output doesn’t hit actual Turbo levels again. The temperature stays low throughout the runtime, too.

At 2.9V, the light was still on, and I stopped the runtime.  The switch was indicating that the cell voltage was low, though.  So we’ll call that “Low Voltage Warning.”

This light also has a micro-USB charge port, which has a thick rubber boot cover. 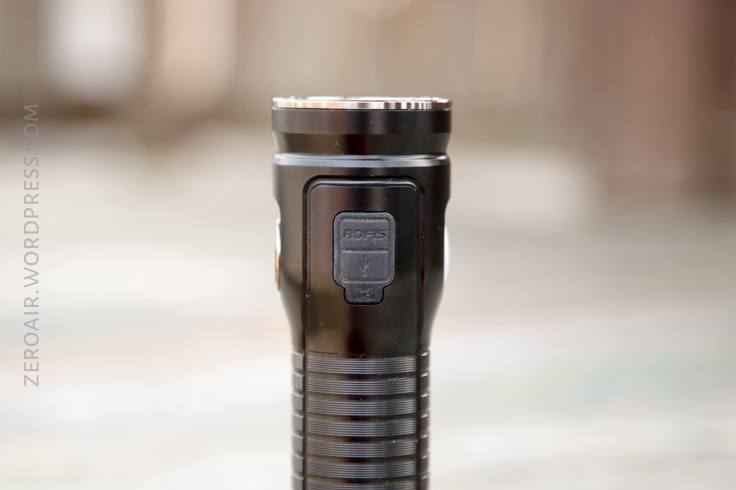 Rofis claims 2A charging, and I found that charging happens at about that rate.  In any case it’s “good enough” charging.  Unfortunately the cell doesn’t test at nearly the rated capacity of 5500mAh.

Not only does the light have on-board charging, it has the unusual option of being a powerbank, too!  I made a little graph below, but bear in mind that the X axis is meaningless.  Really just look at the current drawn in Amps vs the Voltage that the light/powerbank is providing.  Ie when I’m drawing ~2.1A, the voltage is just under 4V, which I believe is technically out of spec for USB charging.  However at more reasonable or common current draws (1A and 0.5A) the voltage is just fine at~4.5 and ~4.8 respectively.  Ie this is a very good powerbank!

Rofis even provides an adapter to allow USB to plug into the setup.  A nice, possibly unnecessary bonus.

There’s a single side clicky switch on the MR70.  It’s an e-switch of course, and has an indicating section in the middle.  The button is slightly concave.  (On the other side of the light is the secondary emitter, which is behind a similarly-sized piece of plastic but it’s convex, and as a result it’s easy to differentiate these parts.)

This button is big, and exactly the right amount of clicky and travel.  What can I say, I really like this switch.

In this Rofis light is a Cree XHP70.2.  That’s a huge emitter, in a relatively small reflector.  The reflector is orange peel.  This makes a broad hotspot with soft edges, and a usable amount of spill.

The XHP70.2 has been said to have a bad tint and I can corroborate that to some degree, but the tint in this light is great to my eye.  The tint is even across the whole beam, it’s just about pure white light…. a great tint emitter.

The secondary emitter is a side emitter behind a opaque cover.  It’s “NW” But it’s actually very warm.  Also of course completely flood.  It’s usable up close but past … 10 or so feet it’s not all that useful.  That is has 3 modes is a nice touch, too. 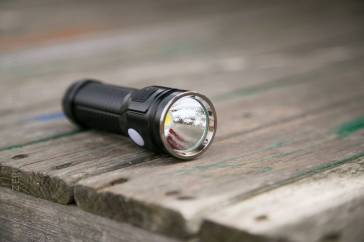 There’s literally nothing that compares to this light in this format.  There are other dual emitter lights, many 26650 lights, even a bunch with micro-USB charging.  But the powerbank feature…. Nothing else has that.

The Acebeam EC50 Gen II and the Klarus G20 are about as close as anything else now.  The Rofis is much more compelling than those two for me.

I’d love to finish a non-flashlight item for tomorrow, but I’ll definitely have the Nitefox UT20 on Friday.