Olight has recently released a new version of the M2R. This is the M2T, which is similar to the M2R, but without on-board charging (and costing much less!).  This light has some noteworthy tactical features, and is a nice iteration of the M2R.  Read on for more!

There is just one version of this light.

This is a nice quiet light, with Olights good reputation behind it.  It’s a nice addition to the Warrior family.

It seems that Olight likes to test packaging options.  This is yet another new, highly refined package from Olight.  This one has a paper-zipper type opening (tamper-evident-packaging).  The box isn’t just regular cardstock, either.  The cardstock feels like linen stock, or some special paper, anyway.  It’s a nice package.  The box (and light) are serialized.

The manual is standard Olight fare.  There are a bunch of languages, all the basics are covered – really no surprises with the manual.  Unfortunately Olight’s websites aren’t updated with the M2T manual, and all link the M2R manual.  The light itself does ship with it’s own manual; I’ve attached scans of the English parts below. 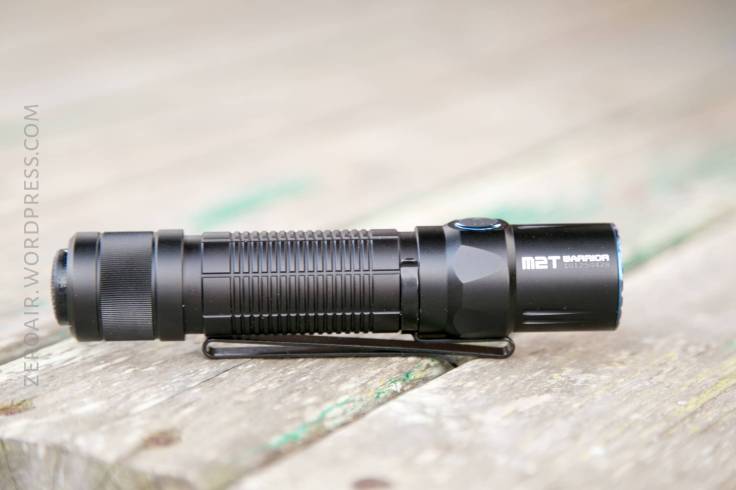 This M2T Warrior has a fantastic heft, and the anodizing is smooth and just feels like a quality light.

The build quality is very good.  The body has a lot going on, to be sure.  Tailcap has it’s own reeding.  The cell tube has it’s own type of grip.  The switch area has a hexagonal anti-roll shape, and some heat sinking fins.  The head has knurling that matches the M2R.  And the blue anodized bezel has a bit of ridging, too, but not “tactical strike” ridges. 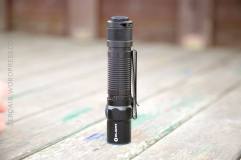 Unlike the M2R, the M2T will not tailstand, due to the large tactical switch.

The tailcap has a nice stiff sprung brass button, and the head end has a big, moderately stiff spring.  Unusually, the cell goes with the negative terminal toward the head of the light. 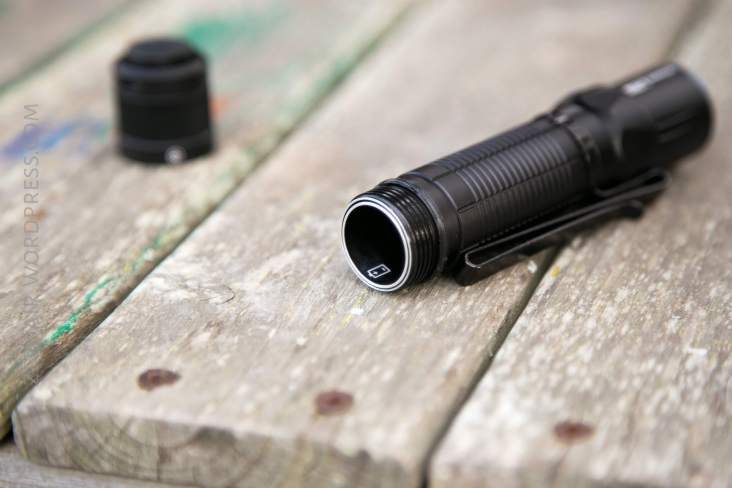 The bezel unscrews easily with the right pressure in the right way.  (I press the light fairly hard straight into a piece of wood, and twist.  The bezel grips the wood and doesn’t want to turn, and thus unscrews easily.)  The reflector falls out, revealing the emitter. 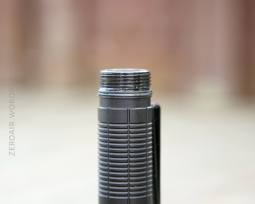 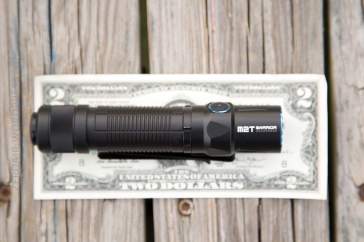 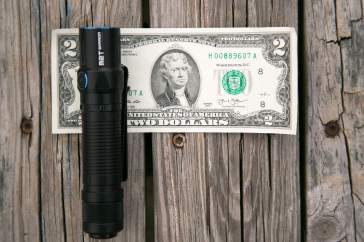 Olight includes a nylon pouch, into which the light will fit tail or head up.  The pouch is a very standard pouch, with stretchy sides, a d ring on the back, and velcro belt loops. 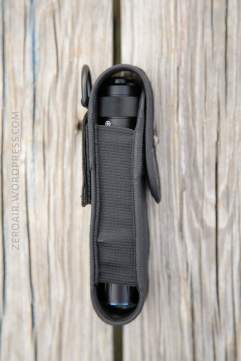 The pocket clip is reversible too, but that might never be necessary since it’s one of the new style dual-direction clips.  The extra loopback seems unnecessary to me, and I never use that.  If I want the light to reside in the other direction, I’d move the clip to the other side. 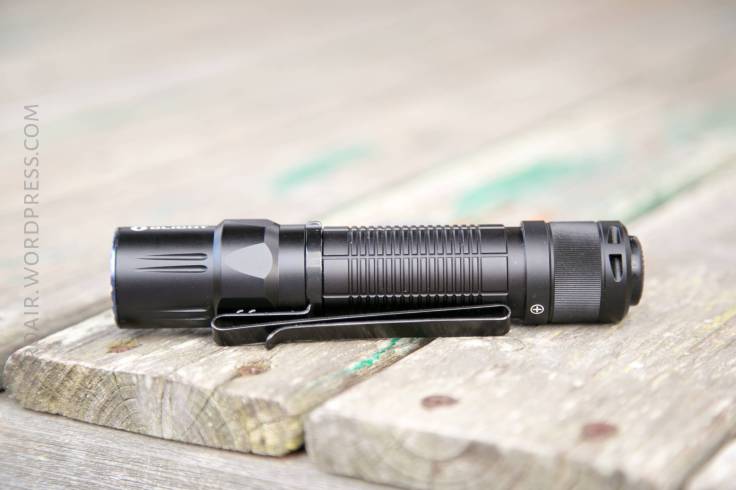 There’s also a lanyard included.  Te lanyard attaches to the tailcap.  The clip has no attachment points for a lanyard.

Interestingly, Olight includes two cells with the light.  They are both CR123A cells, and there’s a cell tube included to make the fit right (these cells are a couple mm less in diameter than 18650s.)  Also supported are single 18650 cells.  Confusingly, a single 18650 cell has higher output (reported) than a set of CR123A cells (which would have higher voltage than a single 18650).  Lower output, worse runtimes; unless work is providing your CR123A cells, 18650’s seem like a better choice.  I tested the light mainly with a GA 18650, but recorded numbers for the provided cells as well.  Working voltage isn’t mentioned, so (while it’d probably be ok), I can’t say that two 18350 cells would work (but again, what’d be the point?)

The cell holder Olight includes is a very nice holder. 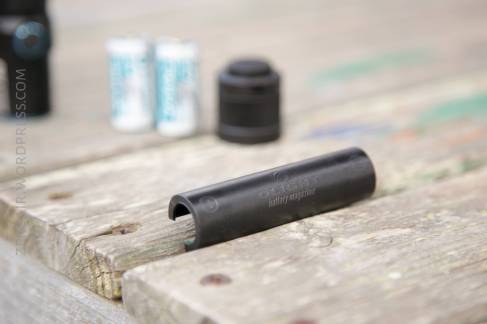 As mentioned above, the positive terminal of the cell(s) go toward the tailcap.  Also noteworthy is that the cell tube has an inner liner.  On the M2R this was likely to help facilitate on-board charging.  I’m not certain what’d be the point in having this light set up this way.  Probably just remnants of it’s predecessor.  If I can manage to get the inner sleeve out, I’d love to test a 20700 cell in this light.  It should function normally, and possibly add a bit of capacity.  (This sleeve came out freely in my M2R, but not so in the M2T.)

The runtime is essentially indistinguishable from the runtime of the M2R.  Same profile, similar stepdowns…. The M2R does seem to step down to a higher plane, though, (at around 68% vs the M2T’s 46%).

I reset the light to turbo at around 20 minutes just to see what the light would do – Turbo is back and at nearly 100%, which is pretty respectable.

As far as I can tell, the indicating side switch is grossly underutilized.  It seems to only light red when the cell voltage is low, and doesn’t do much more.  So little, in fact, that the use isn’t covered at all in the manual.

There are two switches on the M2T.  The primary switch is a soft-click (e-switch) tail clicky.  This is a large button, with a lot of texture. 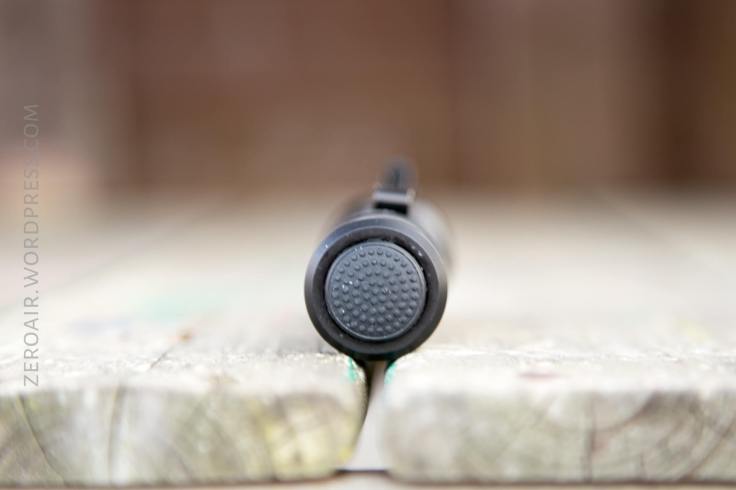 It sits very proud of the tailcap (making tailstands impossible).  This is the needed setup for tactical lights, so this is good.  This switch has no click.  It’s extremely quiet.  It can be heard, but it’s the motion, not any clicking. 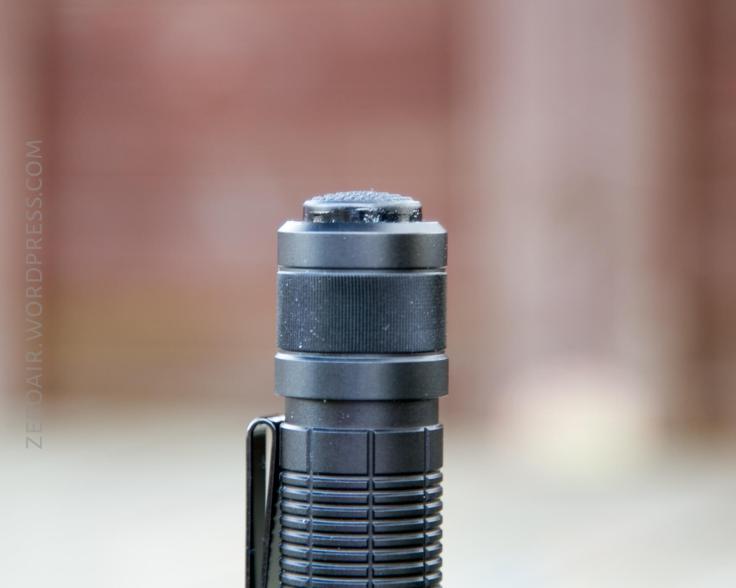 The other switch is a side e-switch, which has an indicator.

Here’s a UI table! This is largely copied from the M2R review, but the UI’s are the same, excluding the features that the M2T lacks.

In this light is a Cree XHP35 HD.  There’s a very nice orange peel reflector, and a white centering ring.

The beam is a lot of spot will a fairly quick roll off into spill.  This isn’t really a thower, but the spot is fairly useful.  I measured around 200m of throw.

This end of the light really looks exactly like the M2R. 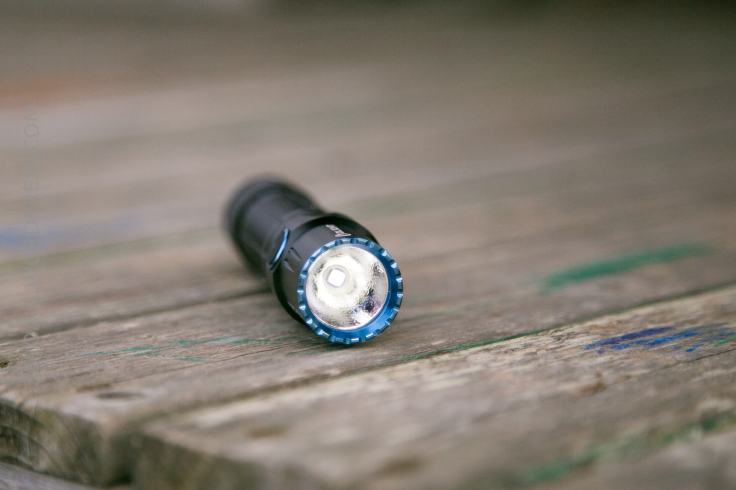 There are a few other competitors to this light.  Armytek Partner C2 is the primary one, with Olight’s own M2R coming in the list too.  I believe the M2T wins on price alone.

This week I should have the Olight H16 Wave headlamp!  Olight Week!