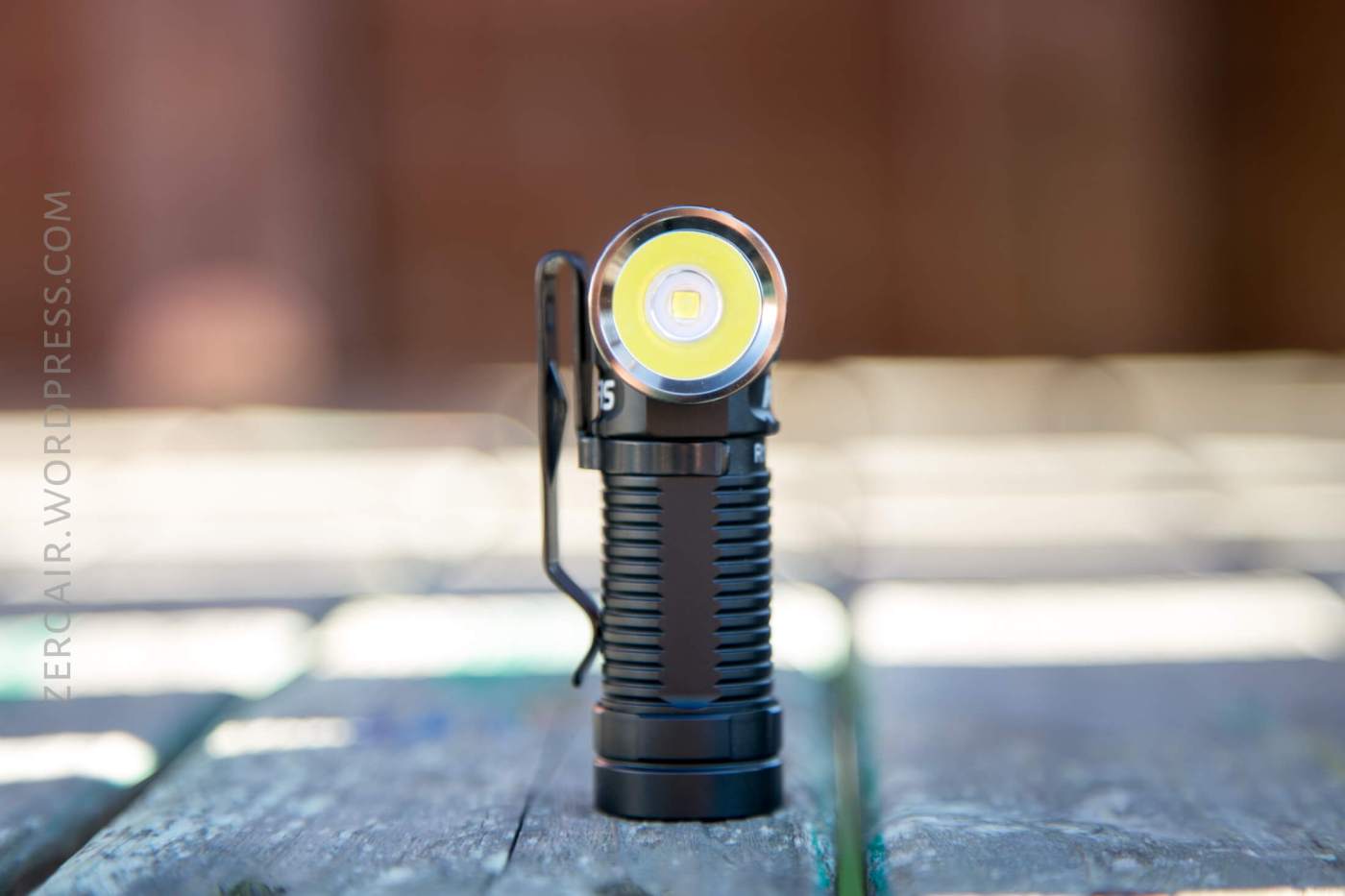 Rofis is one of those brands I haven’t known for long, but I’ve by-and-large liked a whole lot.  Recently I had the MR70, and that’s going to be my go-to travel light.  Rofis has a thing for making lights with rotating heads, and this is another example.  This version, however, adds on-board charging!

Here’s a link to the light on GearBest – check it out there!

There is only one version of the Rofis R1.

GearBest is also having a huge 4th anniversary sale!  Check that out too!!

While this light is a little long, the whole package is great, and of course I like the orange accessories.  🙂  The twisty head works well, and on-board charging is a good bonus.

Rofis has a black package with orange trim.  The package has a photo of the light on the front, and features/specs on the back.  There’s a GearBest inventory sticker on the back, so see the manual for the specs. 🙂 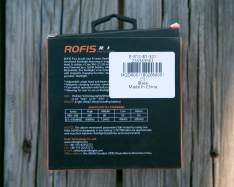 The box is a kind of flip-open package, with a window showing the light. 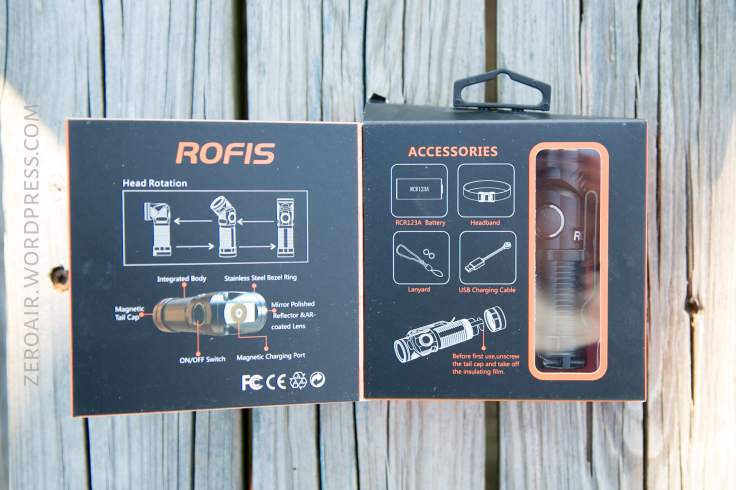 The manual is good.  It’s a along piece of paper, printed front and back with many languages (8, maybe?).  I like that the numbers part isn’t repeated – that’s not usually necessary in my opinion.  Just the wording is repeated.  Saves a little space.  What words there are cover the light well. 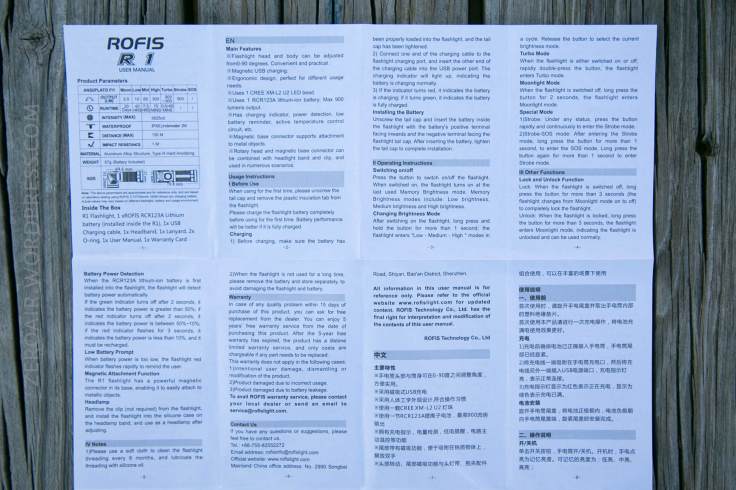 Like other Rofis lights I’ve handled, the R1 has great build quality.  It feels great in the hand, and while I might complain later about it being “long for it’s size” or “too long” – in fact, it’s a nice size in-hand.

Especially when used as an “aerosol” or right angle setup, it’s just a nicely built light.  The twist feature is very smooth, and there’s adequate grip on the head (with a bunch of mass-removing cutouts) to grip.

The threads on the tail are thick square cut, and not all that lubricated.  The tailcap threads on very smoothly, anyway.  I wasn’t able to get any other parts of the light off, but I believe the bezel should unscrew with the right motivation.  Note in the body of the light that there’s a brass ring around the positive contact.  This is physical reverse polarity protection (and prevents flat top cells, too). 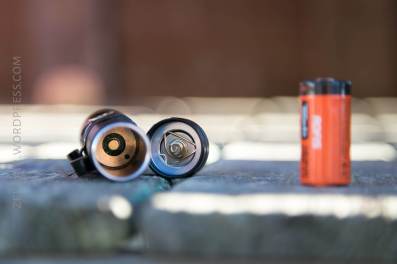 I have a couple of comparison shots but I managed to forget to upload them.  I’ll add those back in at zeroair.wordpress.com later.

The R1 comes with three means of retention.  Firstly, the pocket clip.  It’s a friction fit clip, which attaches on the head end.  The clip will can remain on the light while the head twists around, but it needs to be in one certain spot.  That spot is on the side with the “Rofis” label.  The clip is good – very standard clip. 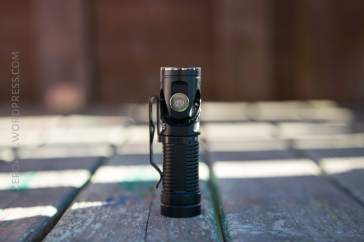 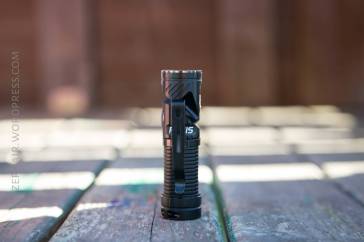 Next is the headstrap.  The silicon part is orange, so is obviously vastly superior to any other holder.  The strap is brown and green – altogether unusual.  Only around the head, not over, which is fine for a light light. 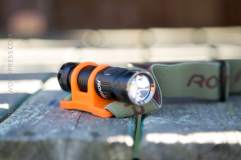 Finally the tailcap has a magnet, and it’s nice and strong.  It looks to be held in by the brass contact spring, and is likely removable.

Here’s a runtime on Turbo.  Turbo steps down at exactly the claimed 30 seconds.  It’s also possible to reset the light to Turbo, though it doesn’t reach 100%.  Unfortunately the 30 second stepdown confounds a throw measure.  I measure at 30 seconds, and the light stepped down literally exactly when I took my measurement.  I can’t fairly say that the throw rating is inaccurate, but according to the [FL1] standards I measure by, that’s why there’s such a disparity. 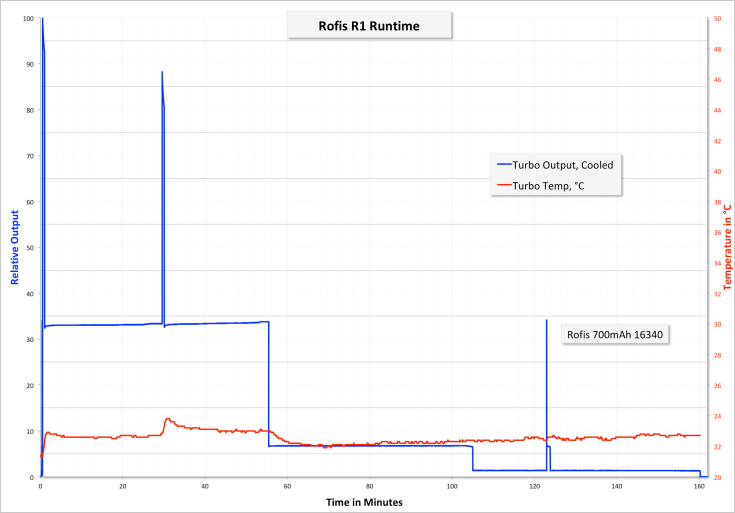 I also didn’t find the light or cell to have any low voltage protection.  When this runtime was over the cell was reading 0.0V.  The manual says there’s a warning indication on the switch (red, flashing), but I didn’t observe that in my testing.  More on the switch later.

The R1 also has on-board charging.  This is achieved with a magnetic connector on the light end, and USB on the other.  The cable is fairly short, but the connection is very good, and charging works well.  Since the cell used in the light is not proprietary, the R1 can recharge any button top 16340.

The chargetime is one of the cleanest I can recall.  Absolutely flat 0.44A charging.  Fairly slow charging, but 0.5C should be very easy on the cell, a feature I appreciate. The cell is labeled as “700mAh” but it tests much higher, at almost 800mAh.

There’s a single switch on the R1. It’s a silicone side e-switch. It’s large, and responsive, and if I’m honest, I really love it. It’s one of the better indicating switches I can recall – very nice illumination across the switch.

Unfortunately I couldn’t observe the red part of the indicating switch warning me about low voltage.  And since the light has no LVP, I ran the cell down to 0.0V, which of course, is not good.  I further tested the switch with my bench power, and while the green works fine, I still didn’t observe the red.

A note about the green – when a cell is first installed in the light, there’s a voltage check.  If the cell has >50% capacity, the switch lights green for 2s.  If power is between 10 and 50%, the red will light, for 2s.  If power is <10%, the red switch will flash for 3s and shut off.  During the time that the switch is lit, the light is unresponsive.  This means that for 2 seconds after installing a cell, the light is inoperable.  That sounds minor, but I found it very annoying.

The emitter of choice in the R1 is a Cree XM-L2 U2.  The reflector is shallow, and smooth.  The beam has a distinct hotspot with very little spill. 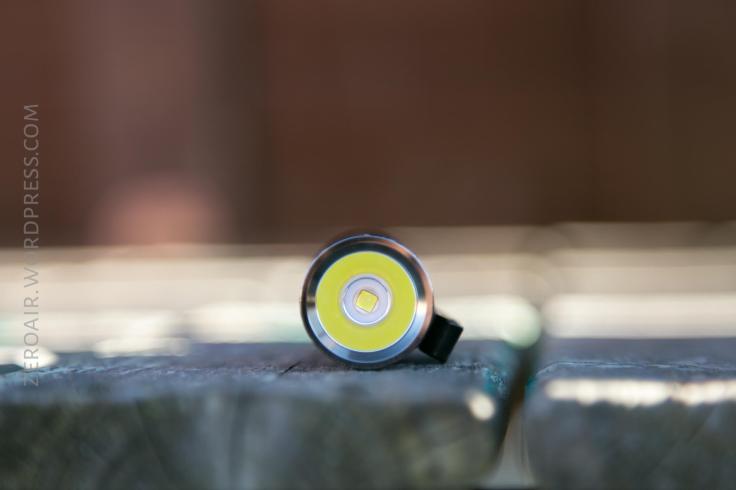 It’s worth noting that the moonlight mode on the R1 is very respectable. 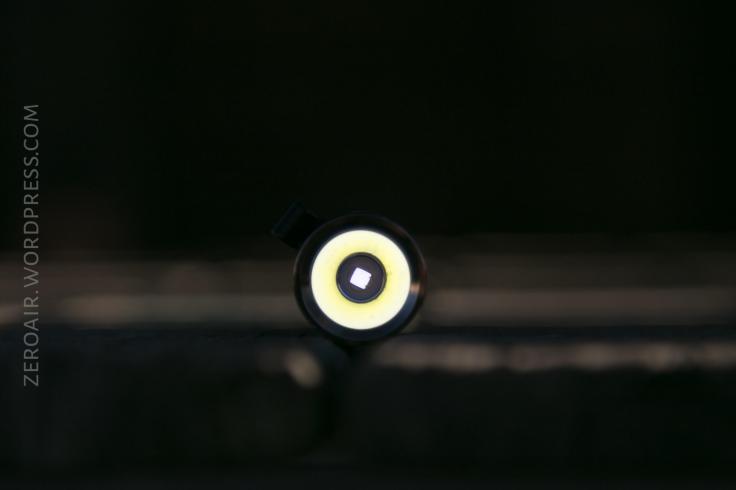 And while I didn’t talk about it a whole lot in the review, the angle feature of this light is neat, useful, and makes the light just look cool!

* I’m putting an asterisk there, because the light probably would measure 150m or more if measured at 29 seconds, not 30 seconds.  The stepdown is very specific: 30 seconds.  As such, it measures on what the stepped down output is, not what it is before 30 seconds lapses.  (Sorry Rofis.)

It’s probably safer to categorize this light as a “headlamp,” even though I’ll use it mainly as a straight light.  Even in the more limited headlamp category, there’s quite a bit of competition.  Even Zebralight has a bunch of entries in this group.  That said, once “on-board charging” is added, there’s really just one other competitor:  The Olight H1R.  Now I liked the H1R, but the R1 adds a twistable head, which is a nice, and neat, bonus.

Next week I have a light or two, a bunch of chargers, and ideally something off the “not flashlights” list!  Busy times ahead!