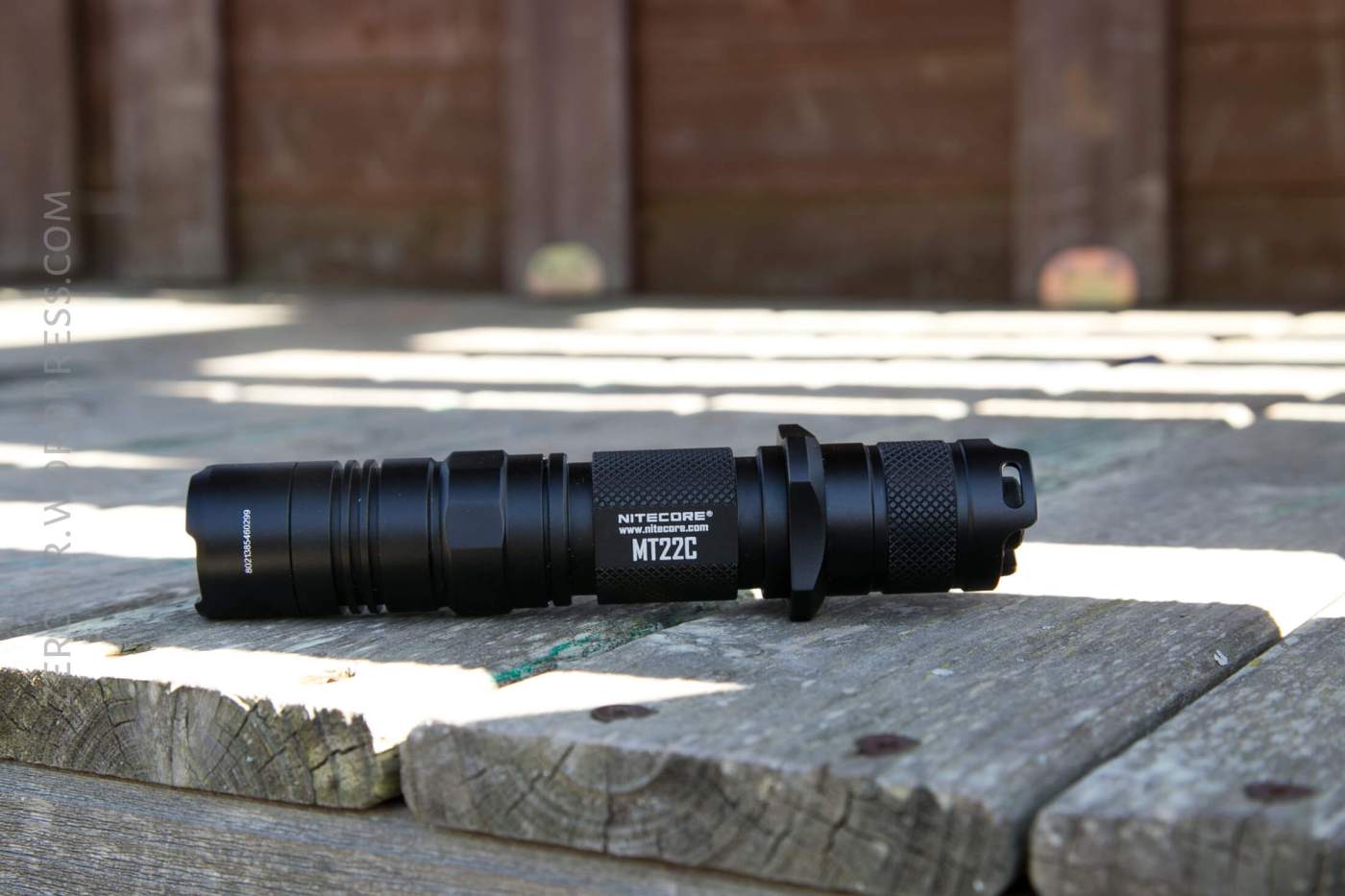 Next in my somewhat long list of Nitecore lights is a light very similar to the P26 I just reviewed.  This is a smaller variant, still with the rotary dial and dual switch.

There’s just one version of the MT22C.

The MSRP on this light is a reasonable $49.95.  You can buy this one at NitecoreStore.com.

This is another solid iteration in the MT series, with the infinite adjustment.  Just like on the P26, the UI – the rotary dial – really needs to have a detent to differentiate Turbo from the rest of the regular modes. 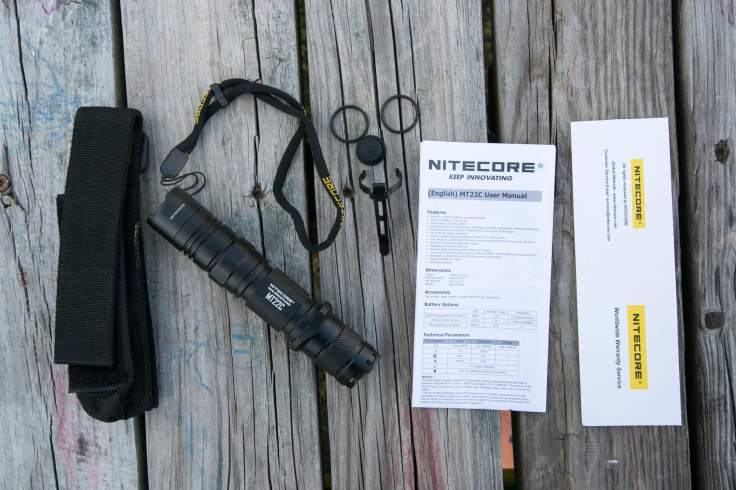 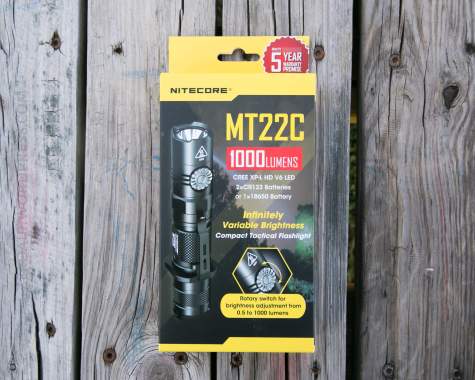 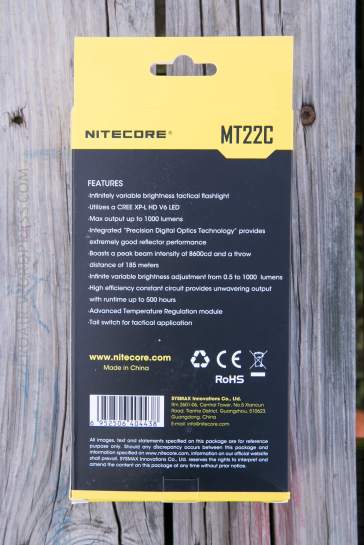 Much like most of Nitecore’s lights, this one has good build quality.  The anodizing seems nice and thick, and is somewhat glossy. 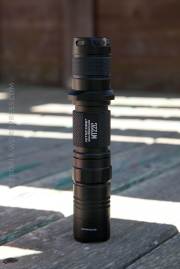 The tail threads are triangle anodized threads.  Oddly the head threads are square cut (and also anodized).  Because of this I’d recommend changing the cell by removing the head (though, I never had any concern with cross threading either end).  This of course means the cell tube isn’t reversible (anyway OD on these parts is different.)

The tailcap is held together simply, by a retaining ring with divots. The head is held together differently – the driver is possibly press fit in but it’s hard to say.  To be honest, however it’s held together, I was distracted by the face that Nitecore has clearly designed into this part: 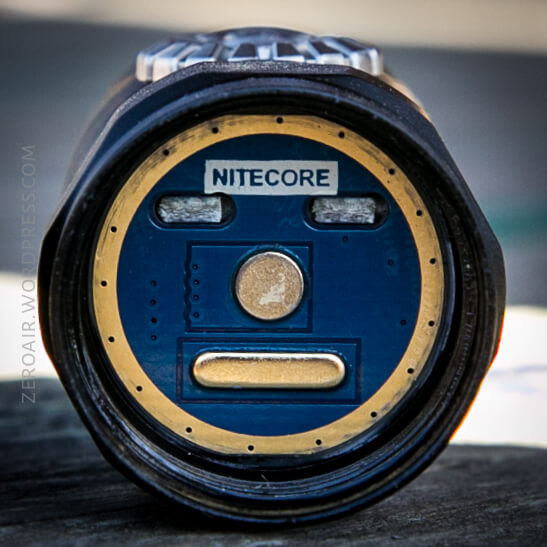 Here’s a closeup of the light, and the tactical ring.  More on the tac ring later.  The knurling is comfortable, and not too grabby.  Not even all that grippy to be sure. 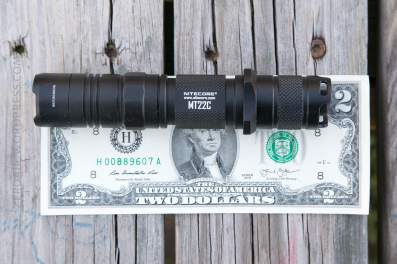 It’s pretty long for a light that doesn’t add any features like on-board charging.  Presumably the rotary dial adds a good bit of length. 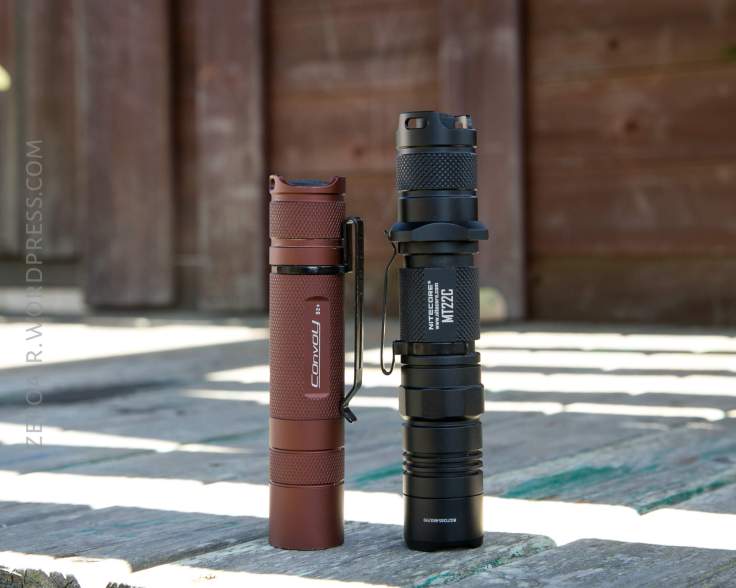 The included nylon pouch is standard flashlight fare.  There’s a plastic d-ring, and a double belt loop, including one with velcro.  The light will really fit either way except with the tactical ring installed.  If installed, the light will fit just one way, and not even fully into the pouch at that.

The tactical ring has a loop for lanyard attachment. 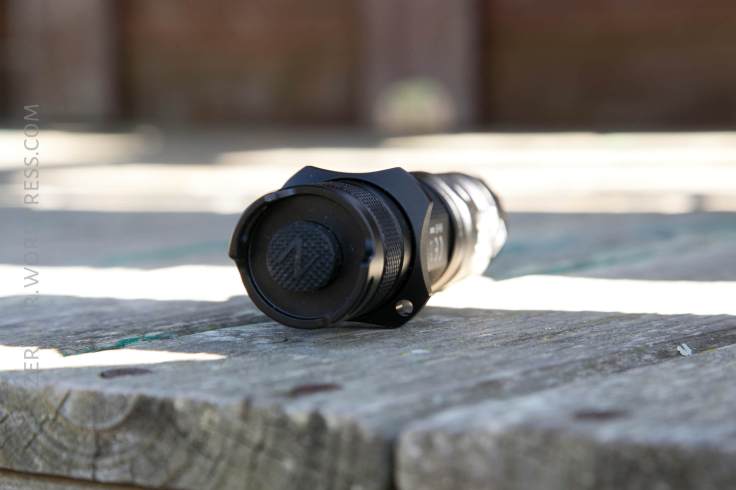 There’s also a lop in both sides of the tailcap, which is made for accepting the lanyard.  The light will tailstand but not all that gracefully since the tailcap has such large cutouts for glove operation.

The pocket clip has grooves on both ends of the light, but in both cases part of the light will stick up an inch or more.  The tactical ring makes the clip positioning specific.  But the clip and the ring may be used concurrently. 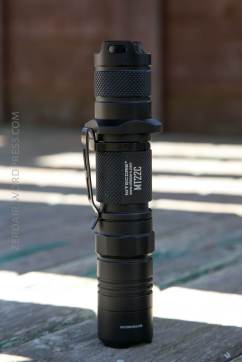 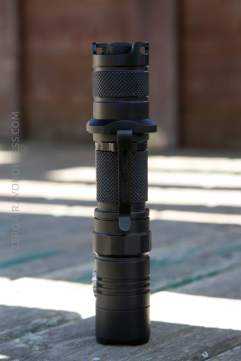 The tactical ring is threaded onto the light.  It doesn’t rotate freely.   So it’s removable, but if removed there will be left (and exposed) fairly fine threading for it.

Here’s a runtime on the highest output, with the 18650 pictured above.  There appears to be no regulation, and a slow but steady decline from Turbo begins immediately.  That’s disappointing. In the test I failed to connect the thermo sensor appropriately , so the first 10 minutes or so (the important bit, of course) is missing.  Apologies for that.

The light does not have low voltage protection.  As tested with my bench power, the light never really shuts off, but the cell voltage gets below the forward voltage of the emitter.  This point seemed to be around 2.3-2.4V.

There are two switches on the MT22C.  The primary one is a mechanical forward tail clicky. 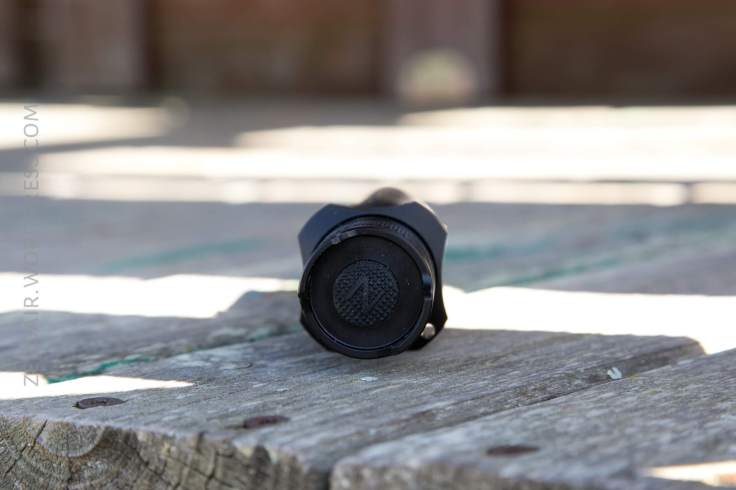 The second is an unusual rotary dial on the head of the light.  And even though it looks like there’s a button in the center of the rotary, there isn’t.

While the rotary dial is neat, and works well, it could be better.  My primary qualm is that the only dial feedback is a single click between Turbo (or 100%) and Strobe.  One of my two issues is that this is not an exact position.  Sometimes strobe will engage before the actual click.  That’s one complaint.  The second complaint is tied to this – It’s hard (if not impossible) to reliably dial directly to 100% and move on to operation.  At the very least the dial needs two clicks.  One which is reliably turbo, and one (much stiffer imo) for strobe.  Or maybe that little button-lookingest-not-a-button in the center of the dial could be harnessed for strobe.

If you’re wondering that the above sounds familiar; it should.  Or well it should if you manage to usually read through most of my text.  It’s the same as the UI for the P26.  In fact these lights are essentially the same from the driver down.  The head differs, as does the emitter, but otherwise these lights are identical.

The MT22C uses a Cree XP-L HD.  The reflector is smooth, and shallow.  This makes a fairly artifacted beam with a hotspot showing the shape of the emitter fairly clearly.  The spill has a tint I don’t care for, too.  All in all it’s far from my favorite beam.

There are many lights that compare to this one, except when the rotary dial is added to the criteria.  So the rotary must be considered the selling point.  I like the rotary, but it does need a touch of work.  I would absolutely love the two improvements mentioned and I think they’re doable.  Even in this current state, it’s a reasonable light.

Going to have one of those random one-off review items hopefully tomorrow, and if luck prevails, a Nitefox light on Friday!