After my recent Maratac PCL Brass review, I realized CountyComm had a bunch more items that would be good for review.  I reached out to them, and this is the first of a few things they sent.  This is the Maratac AA Titanium flashlight, 2018 rev 2.

There are at least a couple of versions of this light.  One’s copper, and is labeled “Rev 5” – truthfully I am not sure what the revision numbers mean, and I didn’t find a solid list of iterations of this light.  Also there’s the titanium, which I have here.  (FWIW, Rev 1 of this light looks to have had Nichia 219b.)

MSRP is 74 for the titanium, and $70 for the copper.  Fortunately they’re both on sale in the $40 range.  I think these lights are a pretty good value for copper and titanium at that price.

Anyone probably knows twisties aren’t my favorite lights.  And that threads on titanium often feel gritty.  But generally this is essentially the best of both of those things.  Ie as far as twisties go, this is good.  And as far as titanium threads go, these are good.

Primarily this light comes in a flip top plastic case.  Secondarily, the package is inside a zip-top bag.  The light is held in place with a bit of custom cut foam, and is very secure.

As far as the manual goes, this one is quite brief.  Essentially tells how to install a cell, and not much more.  There could be a good bit more information and I’d appreciate it.  But it’s a simple light, so this isn’t a huge problem.

I am thoroughly impressed with the build quality of this little AA light.  The shiny parts are shiny, and the knurling is very good quality (ie ‘even’) diamond flat-top knurling. 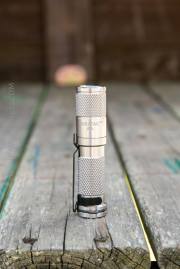 The knurling is of the right grippiness, and in the right places.  Exactly where fingers need it for grip; this should allow one handed operation, but the titanium threads, such as they are, aren’t quite smooth enough.  The price of titanium, I suppose.

As far as disassembly, this is about it.  CountyComm actually has some very clear wording on disassembling this light.

Any attempt to modify these lights will void the warranty. We know when you try to remove the Pill.

Ability to modify an item is one of the hallmarks of ownership in my opinion, so the specific wording isn’t all that user friendly.  However, it does seem like the driver is actually glued in, and modifying this light would probably take quite a bit of effort (to break the glue). 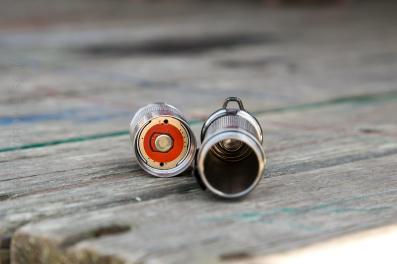 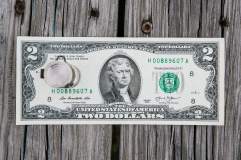 This is not my smallest AA light, but it’s close.  The DQG AA (seen below in brass) is smaller, likely due to having a TIR instead of a reflector like this Maratac.  It’s a great size, to be honest.  A short clicky is still much longer (see the red Lumintop, below). 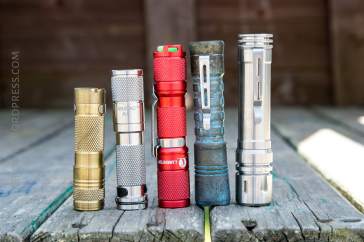 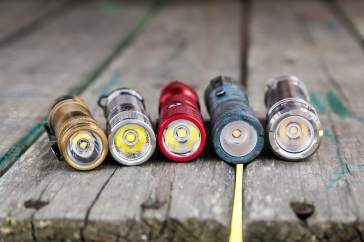 There are primarily two ways to retain this light.  The first, and probably most “permanent” is the lanyard hook on the tail end of the light.  This is just a friction fit circlip type ring, which has a specific orientation and little grooves to hold it in the designated spot.  It’ll remove, but there will be grooves remaining.  It’s a nice lanyard clip.  I would rather that the pocket clip attached the same way, and also had the lanyard attachment, too.

The pocket clip is a very common style friction fit.  Below, you can see that DQG and Lumintop use the same exact clip style.  Lumintop even has the same knurling style….  However these lights don’t mate, for what that’s worth. 🙂 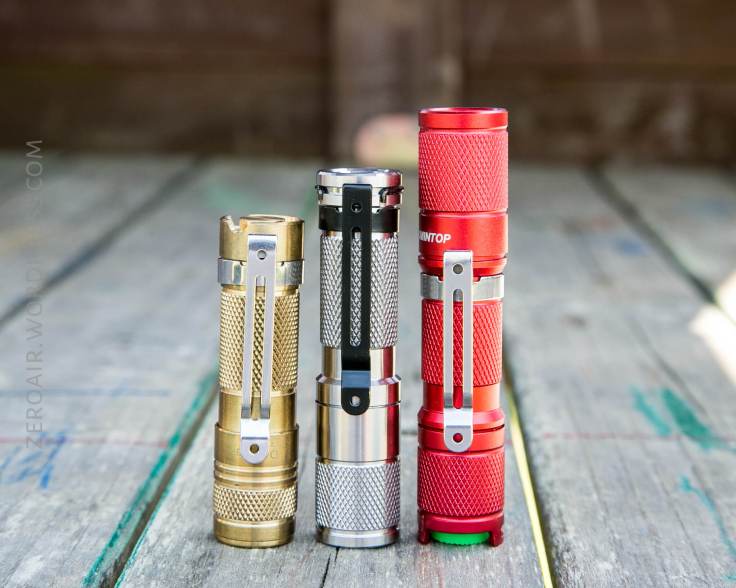 Suggested by CountyComm is primary AA cells.  Rechargeable (NiMH) cells are acceptable too.  Higher voltage cells such as 14500 cells are not supported.

There’s a bit of specific wording worth mentioning:

We do not recommend the use of 14500 Rechargeable batteries with this flashlight unless its an Eneloop Cell. It is designed to use off the shelf alkaline, lithium, NiMH or Nicad AA batteries.

Of course an Eneloop Cell isn’t 14500, it’s AA NiMH, so don’t get confused by that.  And also the “designed to use… lithium…” does not mean Li-Ion cells, it means lithium primary cells, where the voltage is still ~1.5.

The claimed runtime on high is 75 minutes, and the AA Ti gets around that.  The output tracks cell voltage all the way down, and eventually switches to the very low mode seen below.  (around 2% of initial output).  (The temperature variations cycle with room temp.)

This light is a simple twisty.  Twist for on.  If you want a higher mode, twist off then on again.  There are three modes: LMH.  After a few seconds of on or off, the light will reset to turning on in Low.  No need for a UI table, I think….

Here’s the real fly in the ointment for me with this light.  The product listing says that this is a Nichia emitter. Specifically, Nichia 219C.  I can’t really claim to know what exactly this emitter is (it’s a Cree XP-G3, but what do I know…), but it’s not a Nichia 219c (or ‘a’ or ‘b’ or any other Nichia).

I discussed this with CountyComm at length, and they checked through their orders and with their manufacturer and maintain that this is a Nichia emitter, with a “filter.”

I won’t say much more about it than that.  Just be aware that if you’re into Nichia tints and good color rendering, that this light does not have those things.  If you like Cree and tints and outputs similar to what an XP-G3 might offer, then this light will be for you.

Couple these points with the fact that the driver is glued in (or secured in whatever manner), then swapping the emitter will be difficult.  And while the legality of the “void your warranty” statement is questionable, if you do break the light while attempting to modify it, you will certainly have no warranty service options available to you.

Cree XP-G3 emitters have a little black dot in one corner (for indicating polarity), not dissimilar to what can just barely be seen in the 10 o’clock position on this emitter below.

I was excited when I received this light, as I happen to really love Nichia lights.  I was disappointed by the actual emitter, and the actual beam that it makes (no matter whatever it actually is).

There are a bunch of similar twisty lights.  There aren’t many Nichia 219 lights in this category, though.  So this could really stand out if it was Nichia 219c.

I hope to have another light this week, possibly the Nitecore LA30.