The last of a bunch of items I received from CountyComm.com is this little Boker knife.  I wasn’t expecting them to send this, but I’m pleased they did!  I haven’t reviewed a knife in a while so unlike the knife I’m a bit rusty.  And I’ll try to make that the last #dadjoke….

As far as I can ascertain, there is just one finish on this Boker Chap D2.  I will say that this is a bigger version of the Boker Plus Pelican (or that the knives share a lot in look, and that the Chap D2 is the larger of the two.)

The Chap D2 ships in a plain box.  Inside that is a bit of wax butcher paper inside a bubble wrapper.  Simple but effective protection. 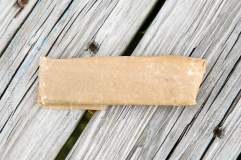 The manual isn’t so much a manual as it is just a company description and warranty information.

Here’s a close up of the stonewash finish.  Also note that these models are serialized, and the production is limited to 1000 pieces. 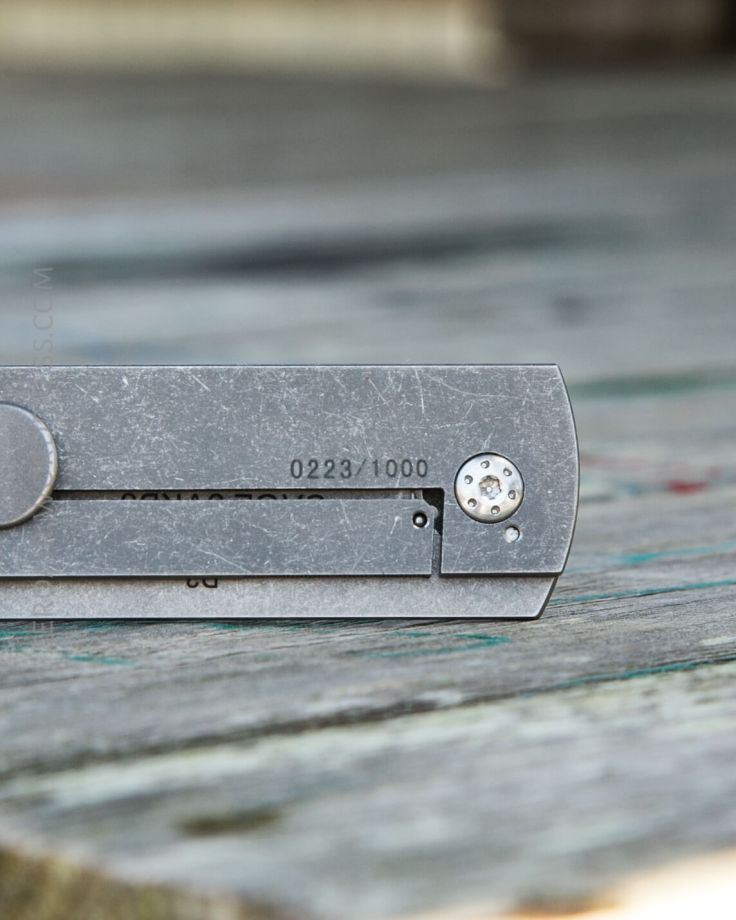 Only one side has the holes.  The frame lock on the locking side prevents holes in this side.

One of the first things you’ll probably notice when handling this knife is how ridiculously thin it is.  It practically disappears when clipped in a pocket! 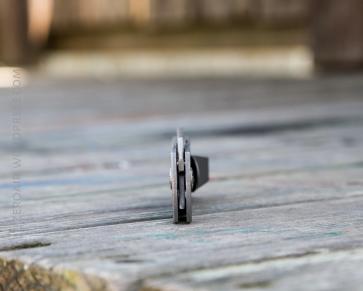 It’s very hard to tell it, but the spine of the blade is rounded, which makes it very comfortable to use.

The Chap D2 has a small divot in the scales to allow gripping the thumbnail groove in the blade.  I can open this knife one handed, but not in a “flick out” motion.  It’s much more of a “pinch the top edge of the blade with thumb and index finger, and swing the blade open with thumb” motion.  It works, and it’s fine. I’d like for the leverage access and points to be around the middle of the knife, and not toward the pivot.  Being so close to the pivot makes it a little harder to open. 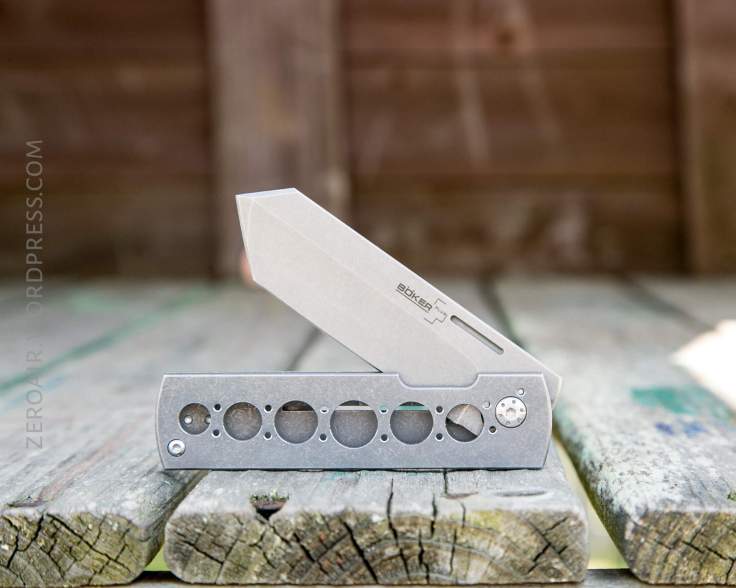 Interestingly there seems to be just an ever-so-tiny bit of sway in the blade, which I find very attractive.  Ie when opened (as below) the knife isn’t just one very flat hunk of metal, with the top and bottom edges completely parallel. 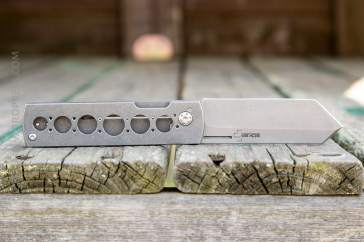 You can see that the frame lock makes a lot of contact to keep the blade opened.  There’s a bit of reeding on the thumb contact area for better grip. 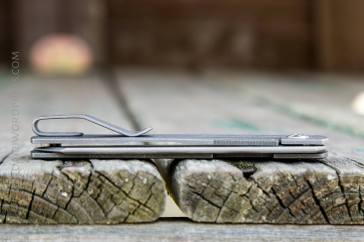 This feels like a very solid knife.  The lockup is great, and never gave me pause at all.  The knife feels great in hand, too, at least as far as finish goes.  I love the stonewash feel (and look!).  The knife is quite thin, so depending on your hand and preference, you could find it uncomfortable to use.  For my use case, it never was uncomfortable.

The scales are titanium, too.  Couple the titanium with how thin this knife is, and the holes in the scale, this knife feels very light in hand!

Also note that with the holes as they are, this knife can be used as a fidget if you so choose.  It’s possible to spin this knife quite well while pinching the knife at that center hole! 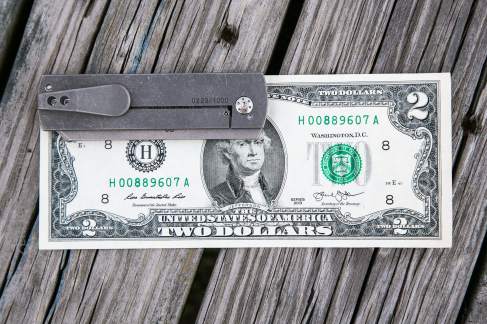 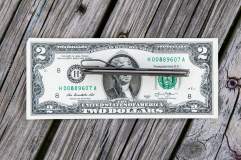 By most standards this is a small knife.  Below, see it with my TorchLAB BOSS. 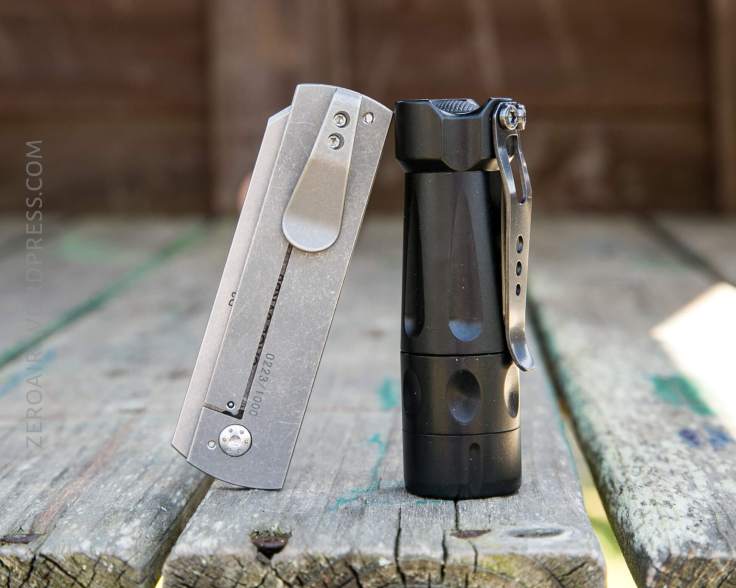 As “small” as this knife is, I would honestly like it to be smaller.

The Boker’s blade is D2 steel.

D2 steel is an air hardening, high-carbon, high-chromium tool steel. It has high wear and abrasion resistant properties. It is heat treatable and will offer a hardness in the range 55-62 HRC… [source]

I haven’t had any issues with the blade, and it practically looks and cuts as it was new.

Also since it’s featured prominently in this photo, the CAGE code, is this:

One of the flies in the ointment for me about this knife is the blade shape.  I don’t normally like Tanto blades.  But this isn’t just a straight Tanto, and it’s different enough that I really quite like it.  It’s maybe a “tanto saber” blade shape.  The bottom edge (under the point) is sharpened.  The top edge (over the point) is not sharpened.

The only option for carrying this knife is the included and attached pocket clip.  It’s a big pocket clip, capable on thick pockets.  But the mouth is not all that large, and I found myself having to stretch the mouth over my pockets.  This isn’t a big deal; maybe even means the knife is more secure.  The clip is held in place by two Torx screws.  It’s possible to remove the clip, but not move it to any other point.  The clip only allows  a tip-up carry. 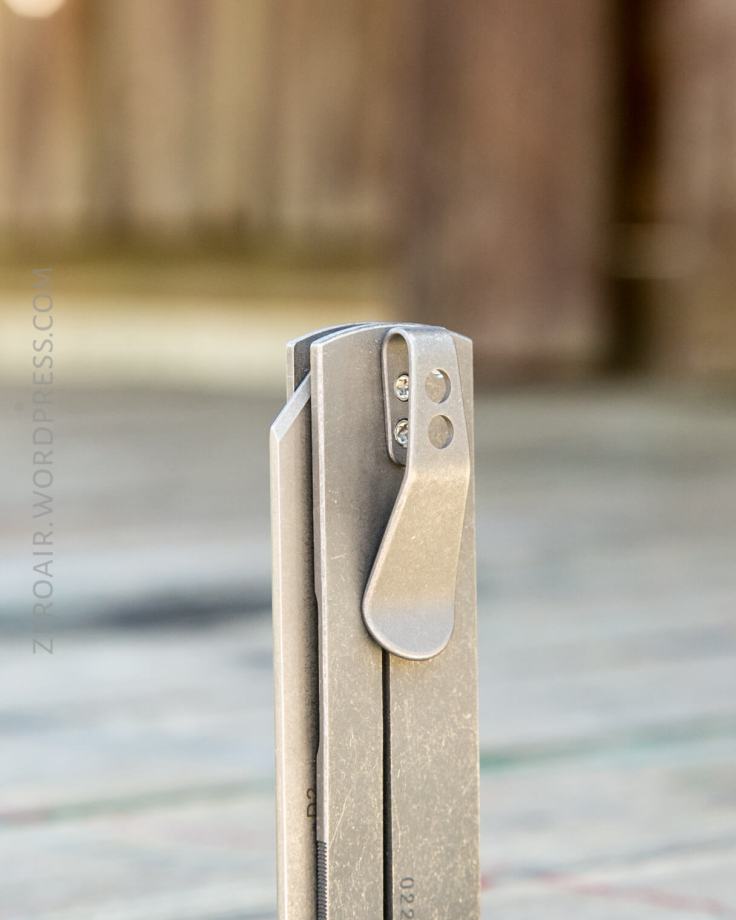 I really like this knife.  I like small knives, to you have to temper anything I say with that information.  But this is a solid knife that feels great in hand and is very usable.

I hope to wrap up a light for tomorrow, and big things later this week!