Nitecore has a new offering in their Multi-Task (MT) series.  This time it’s the MT42, a 18650×2 light, with a dual switch interface, and a rated 470m throw.  Here are my measurements and thoughts on the MT42!

There’s only one version of this light.

NitecoreStore has this light for sale at $89.95.  They also offer two cell options.  Since these are in-series cells, I’d recommend grabbing a set there so that you know you have married cells!

This is a solid light in a fairly niche category.  Since the light has only a 2-up  cell configuration tube (and no single cell tube), it’ll always be a long light.  But it hits it’s throw numbers, and works well. 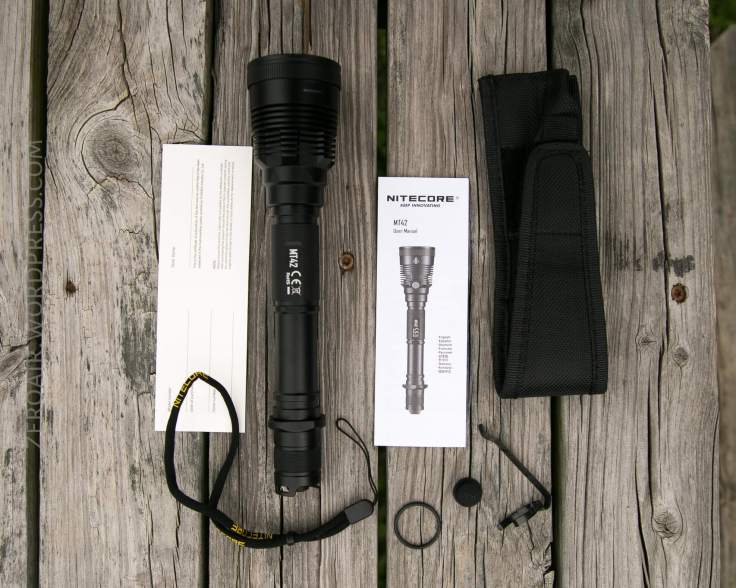 Quite a long box, but still Nitecore standard black and yellow. 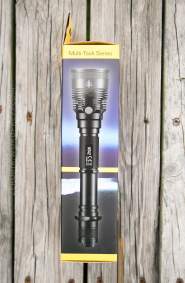 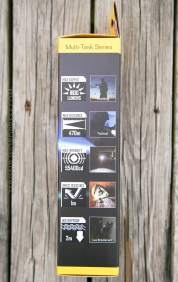 The MT42 has the usual solid Nitecore feel.  Nothing about it stands out as bad but otherwise it’s a fairly standard Nitecore MT series light.

Make no mistake, this is a long light.  But it’s thin, too, and easy to handle. 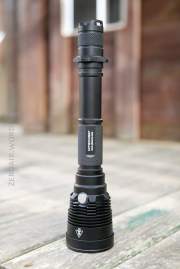 The bezel unscrews easily, and the emitter is accessed thusly.  All the threads are well lubed, to the point of being a little too much lube. 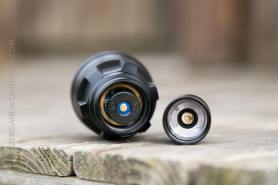 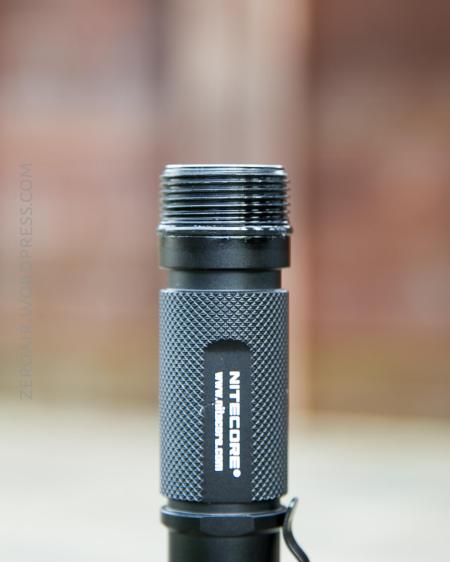 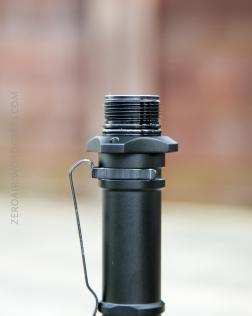 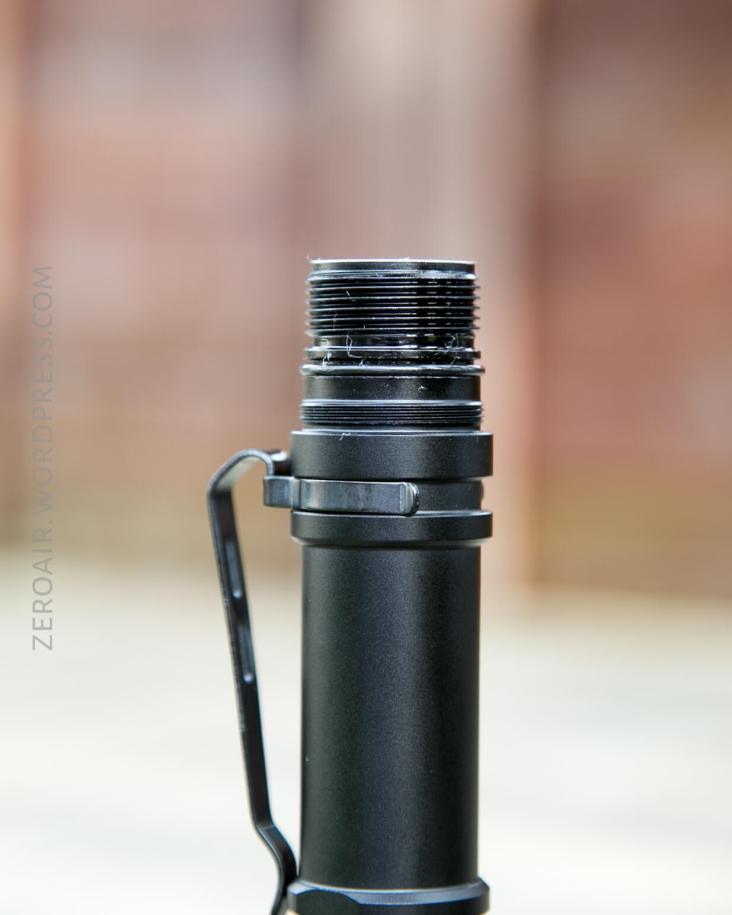 There are a few ways to carry this light.  Based on it’s use scenario, the most often chosen method will probably be the nylon pouch.  It’s a standard pouch, with the light fitting in only one direction (bezel up).

So you’re left with not using the tactical ring or pocket clip if you want to use the pouch.

The next option is the pocket clip, which attaches only on the tail end.  It’s a friction clip.  See below how large the clip is. 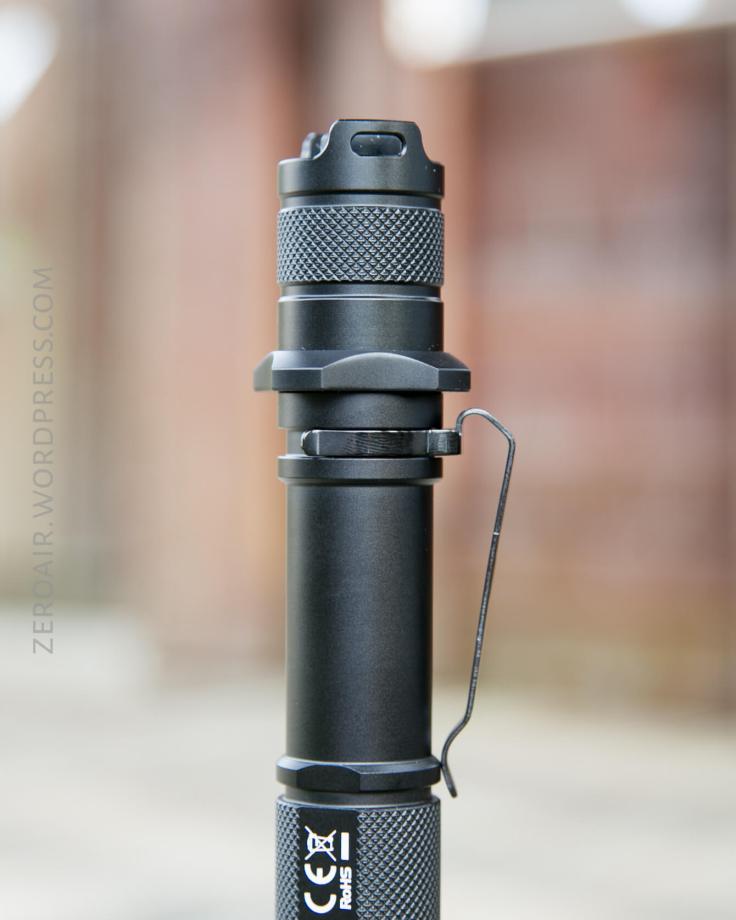 The last option is the lanyard, which can attach on the tailcap, and also through a hole in the tactical ring (seen below).  The pocket clip also has two little holes through which the lanyard might be attached, but I typically don’t trust friction clips in this way.

Button top cells are absolutely required – many of Nitecore’s new lights (including this one) have a rubber ring around the positive connection that prevents use of flat tops.  Probably more intended to prevent reverse polarity damage.

Below is a runtime on Turbo.  Output is fairly steady for the first 4 minutes or so, and I measure the 30 second output at around 1950 lumens.  I stopped the test when the indicating side-switch was fast blinking blue. 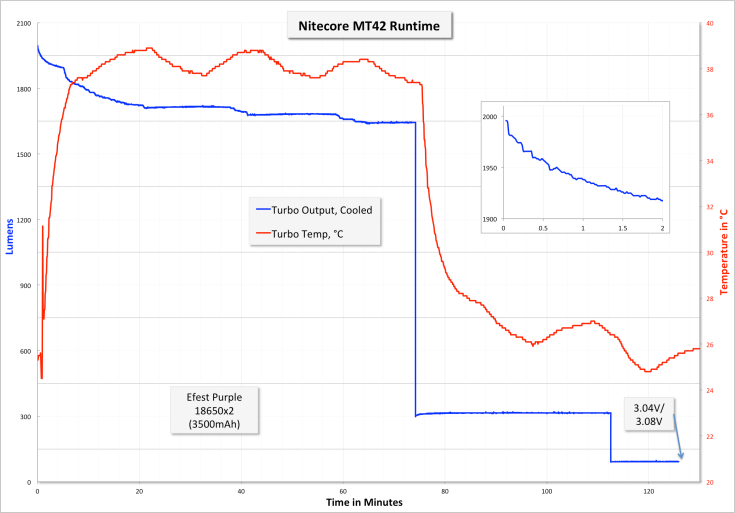 And another runtime on High.  Note that the Turbo mode (above) is generally stable for over an hour, at a much higher output than High.  High is around 900 lumens.

There are two switches on the MT42.  Primary is the tail mechanical clicky.  It’s a forward clicky.

Second is the side switch, which is an indicating e-switch.  There’s a blue led behind this metal switch, for indicating certain things. 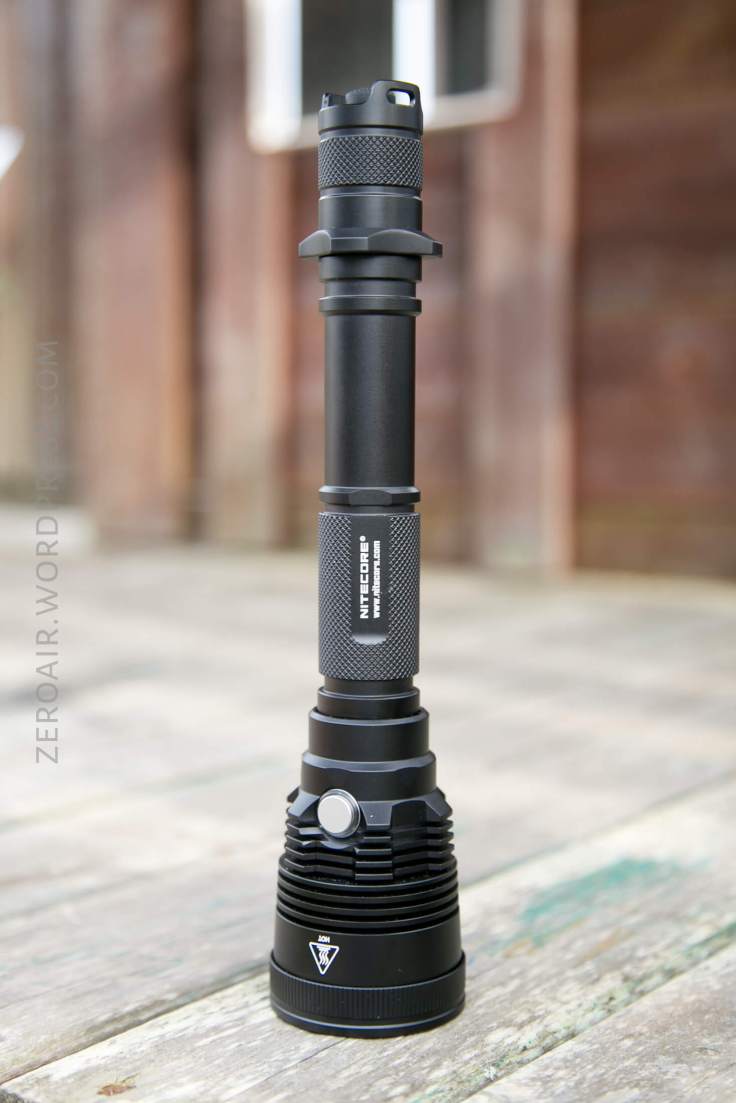 This thrower has a Cree XHP35 HD, and a smooth reflector.  Notably it hits the claimed throw numbers.  I’d really rather see this light with the HI version of that same emitter – I believe it’d throw better. 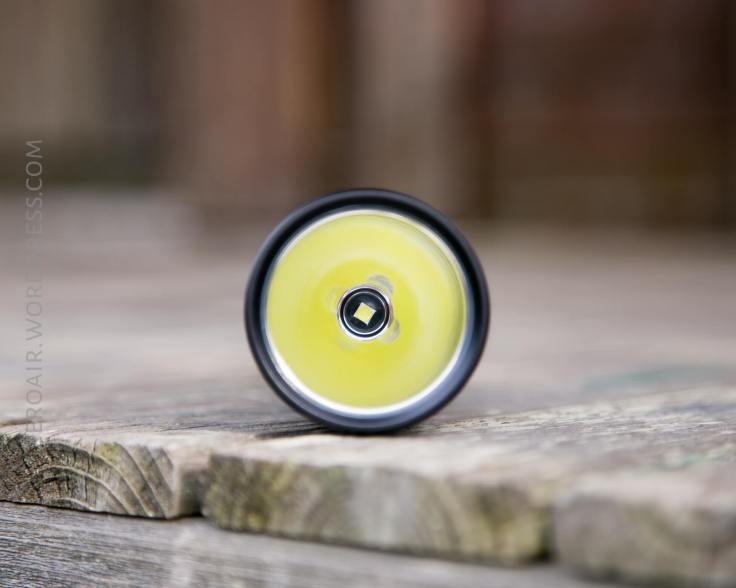 The beam is a very even spot, with a very small bit of spill right around the spot, and not much spill otherwise.  It’s a great beam profile for the use case of this light. 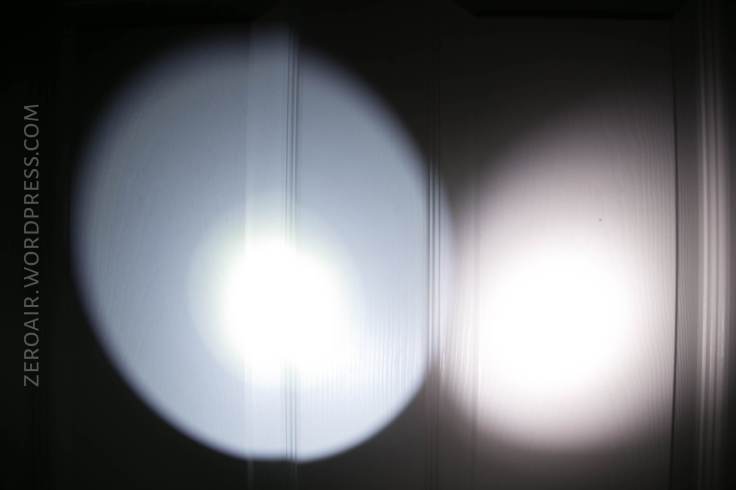 There’s not a whole lot of competition in this 2×18650 realm.  In fact both of the other similar lights are iterations of a light from Armytek.  And aren’t really “throw” lights.  So if this is the kind of light you need, then this one is de facto your best choice.

I have many more lights upcoming, but the most-next-est light will be a Lumintop. I have been on vacation and I’m still getting back around in to the swing of reviewing.  But I hope to fill this week with reviews!