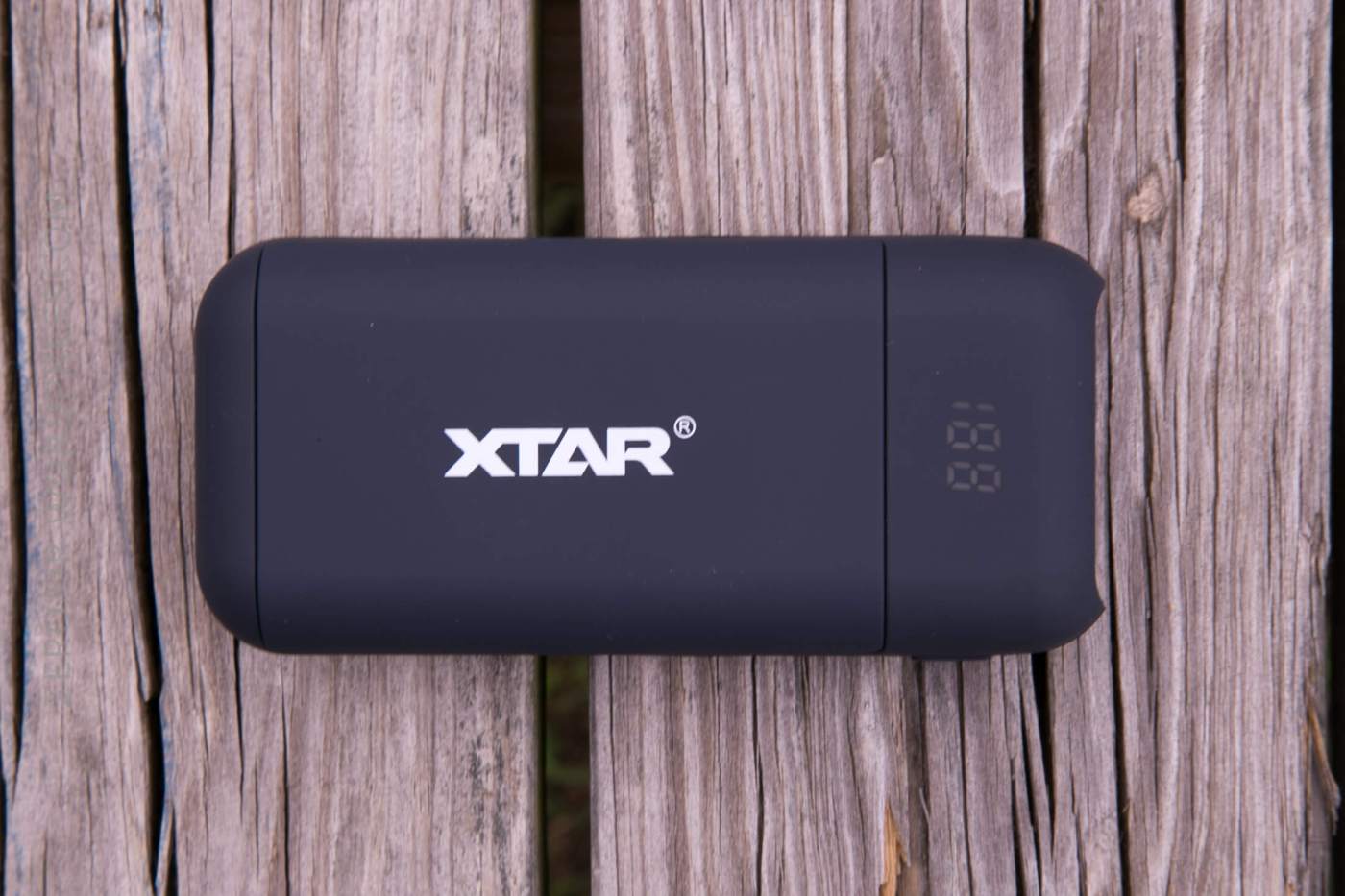 I reached out to Xtar regarding a couple of their chargers.  Particularly the PB2, their newest charger/powerbank.  Looks awesome on paper!  They also sent over a Dragon, which I’ll have some thoughts on later.  For now, the PB2.

I like that this device is closed, even if it’s not waterproof.  The magnet door covers things nicely.  It doesn’t hold the cells in, though – the cells are held in by the bays themselves.  Requiring unprotected flat top cells is a bit…specific… but still an understandable choice.  So overall, I like the charger.

• Max 2.1A USB output, fully charge Iphone 7 Plus in 2hrs.
• Protect our environment with replaceable batteries design, control the quality of the cells yourself and DIY the capacity of your mini power bank up to 7000mAh+.
• Battery charge & discharge balancing technology makes all of capacity available for use and increase each cell’s longevity.
• Conversion efficiency up to 92%.
• Hand-held portable charger with magnetic cover design, fast charge your USB devices and all kinds of cell phones anywhere anytime.
Used as a battery charger:
• Max real 2Ax1/1Ax2 charge current, fully charge 1x2500mAh 18650 in 1.5hrs or 2x2500mAh 18650 in 3hrs.
• Equipped with all XTAR unique features like 0V Activation function revives over-discharged batteries, TC/CC/CV three-stage charging maximizes battery lifespan, multi-protections and so on.

Xtar uses white cardstock packaging, with lots of printing and info.  It’s a very nice package.  There’s even a window to see the product! 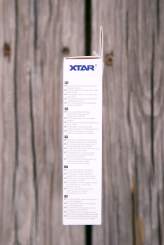 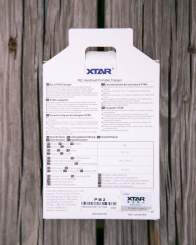 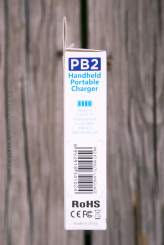 The manual is a long sheet printed with a few languages.  It’s a fine manual.  No complaints on it’s descriptiveness, etc. 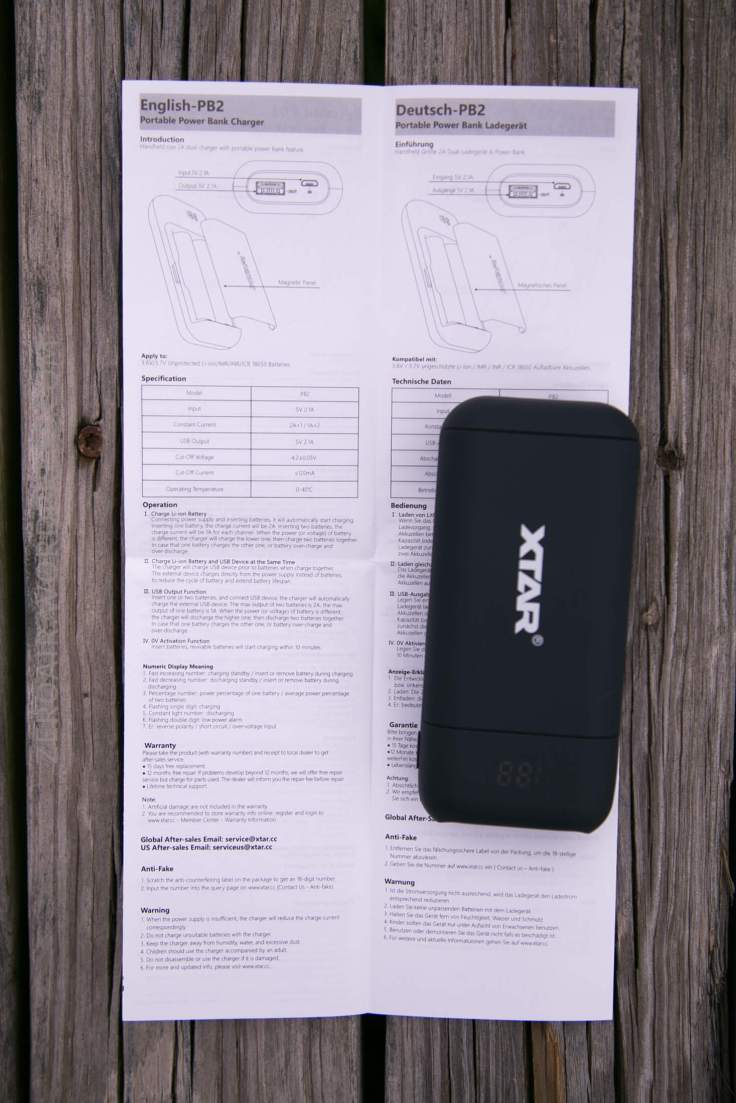 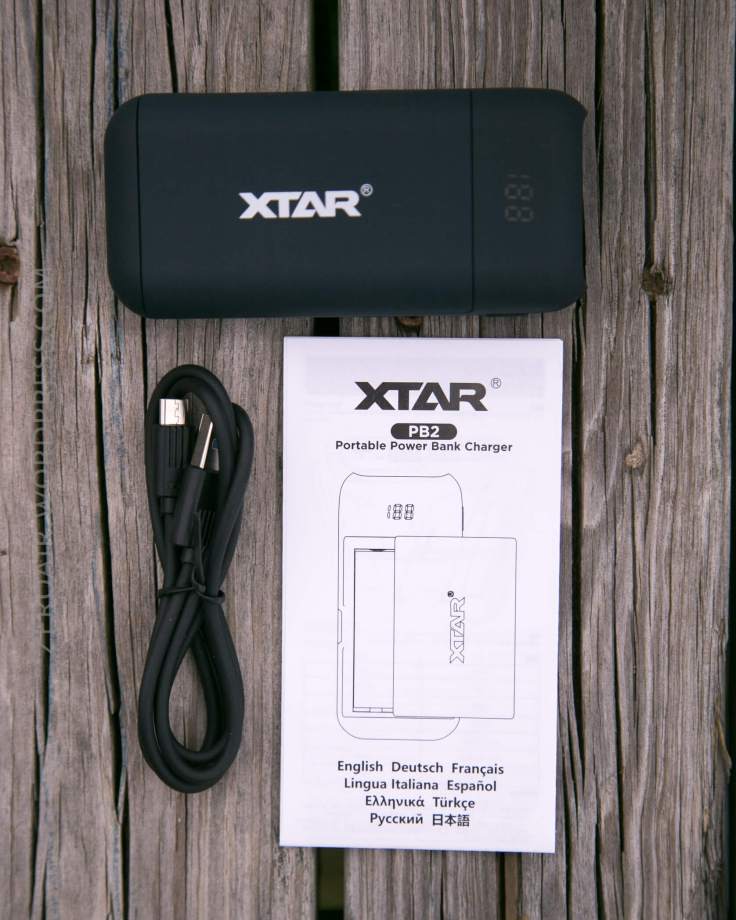 The first thing you’ll notice about the PB2 is the feel.  It’s a plastic device but there’s a coating that gives it a nice soft grippy feel.  I actually love the coating.  Super nice in-hand.  The front just has “XTAR” and also a digital display.  The back has some specs, most of which are a little irrelevant since it’s only possible to put one cell type in here. 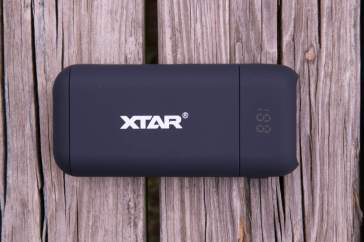 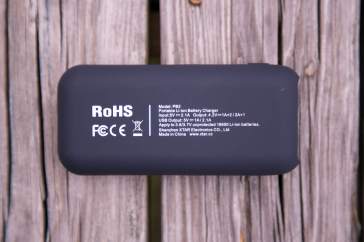 Only one side has a little indent for flipping the lid open.  The lid is held by a magnet on both sides, but only one side has this indention.  The lid comes off fully.  The side without the divot under the lid, has a button instead. 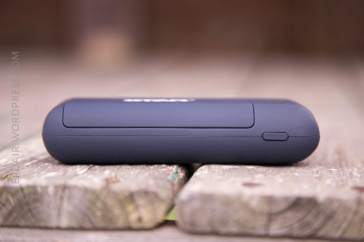 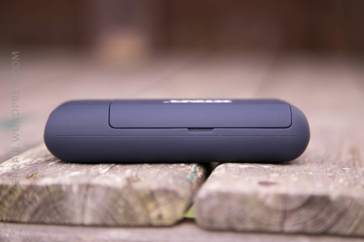 Input and output are on the same end.  Input is via micro-USB, and output is USB.  They’re labeled conveniently. 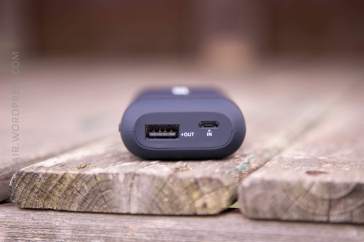 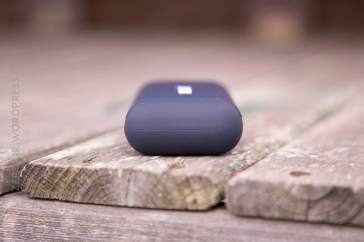 Here you can see the top fully removed, and the magnets that hold it snug.  Inside is a scratch off “authenticity” proof, and a bar code (possibly a serial, too). 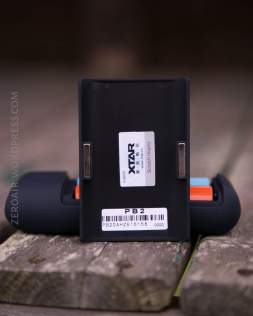 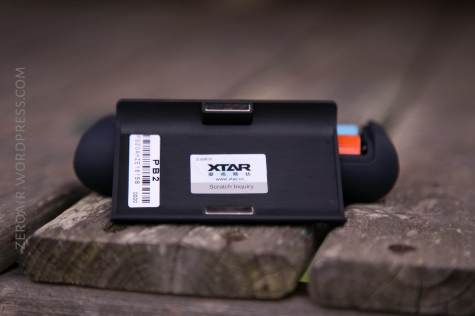 Of course the cells don’t stick out very far; they must clear the top.  But again, that doesn’t really matter because it’s not like you can use anything but unprotected, flat top 18650s in here. 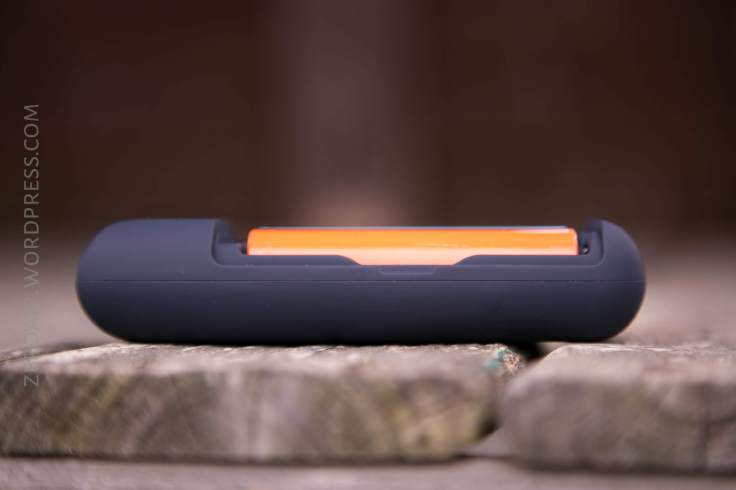 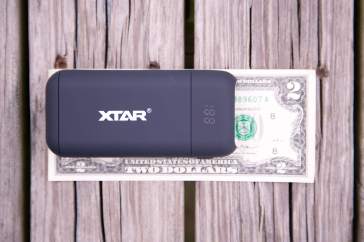 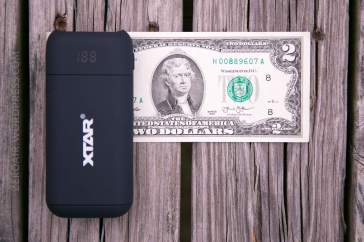 It’s not smaller than what I’d consider it’s biggest competitor, though.  That’s the Nitecore F2.  See the size comparison photos below. 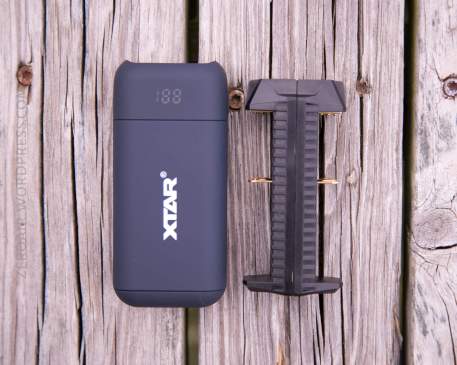 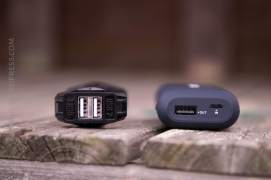 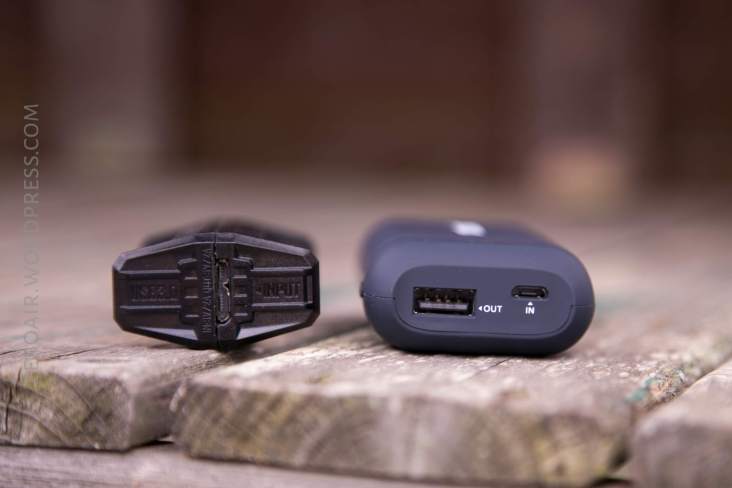 There are a couple of notable differences.  First, the Nitecore has two USB output ports.  Second, the Nitecore has a micro-usb 3.0 port, for [potentially] higher current capabilities (and will also work with micro-USB.)

As stated numerous times above, the device will only accept flat top, unprotected 18650 cells.  It hold them quite snugly; I had to smack the device to have them fly out.  It’s not really possible to leverage them out with a penny, or (more responsibly) some non-conductive wedge of your choice, because there’s very little spring in the system.  The negative terminal does have a springy bit, but it only gives by about 2mm. 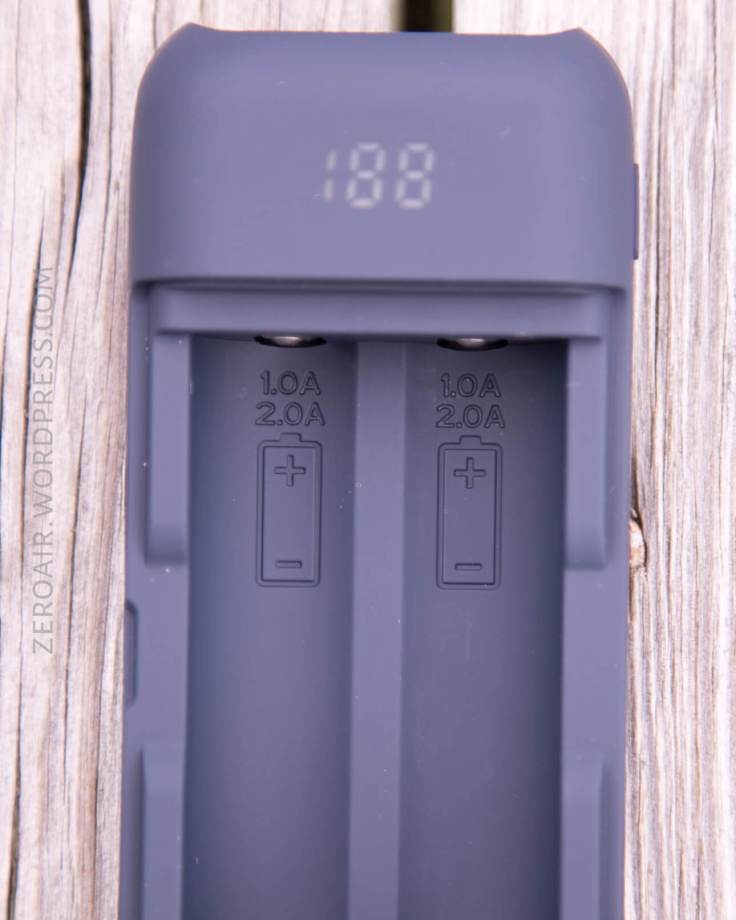 I may sound salty about the fit of the 18650s but to be sure I really like it.  I personally and I think most users, will not likely be taking cells in and out of this charger often.  By which I mean, I see this as more of a powerbank than a charger.

Either bay can individually deliver 2A, unless both ports are in use.  In that case, both ports can deliver max of 1A. 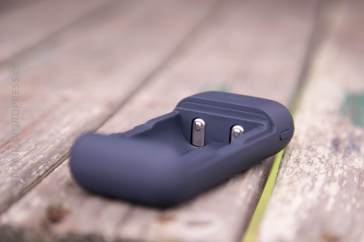 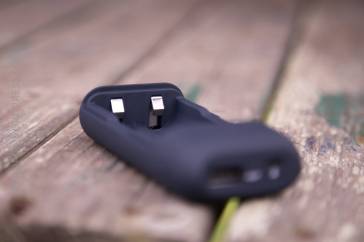 I tested charging with a single cell, and got a graph that looks fairly different from XTAR’s official graph.  I attribute this to my setup (which has moderate to high resistance), and think it’s reasonable that this charger delivers as promised. 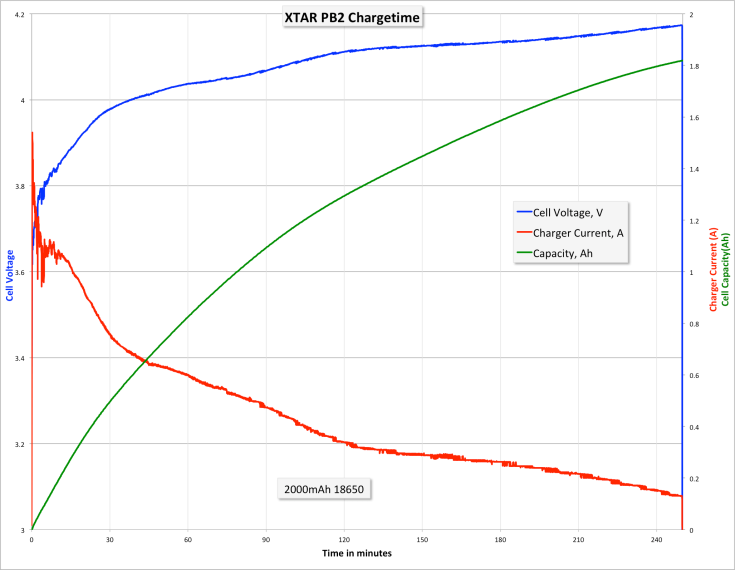 The USB output is good, and was able to deliver nearly 2.5A while staying above 4.8V.  It does like to have active charging going on though – probably not something that will ever be a problem in daily use… if you have a device plugged in, it’ll charge it.  But in my testing, if I didn’t begin to pull current within around 5 seconds, the USB output shut off. 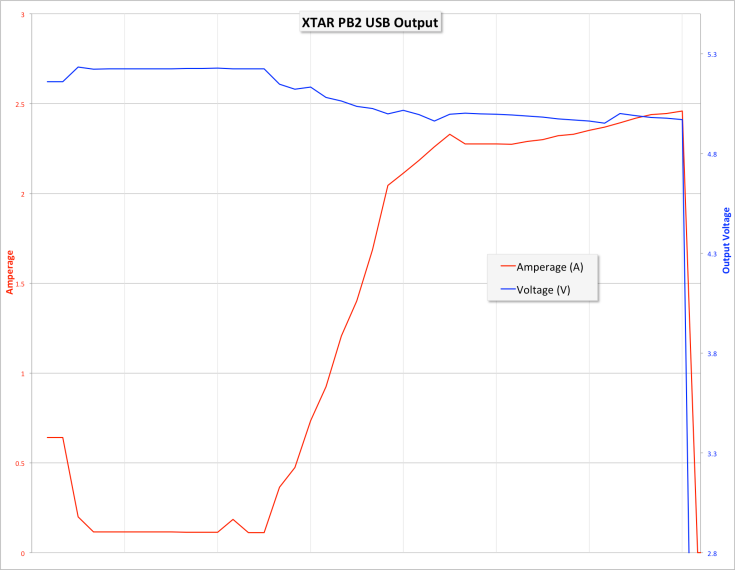 USB output works with one or two cells in either bay (ie any combination).

There’s not much to interface with here.  Most of what you’ll be wanting to do will happen automagically.  When you place cells in, and have power, charging will start.  There is no current to select; if you have only one cell, max current is 2A.  Two cells, and the max is 1A.

Regarding the display; it’s worth recording the meanings of that display here in the review (and not just the manual) because they are novel.

There’s a single button on the side.  This button seems to only serve to activate the display.  You can’t change anything about the goings-on by using this button.

So what does that list mean in use?  For example, I have a single cell installed at the moment.  The device is idle, so the display is inactive.  I click the button once, and the display goes down from 99 to 11 (by tens), (this indicates it’s in it’s “discharging standby” mode), then settles on a number.  Since it’s just one cell, this is the percentage charge of my one cell (13).  If it was two cells, the number would be the average charge between the two.

Since my single cell is just 13% charged, I should charge it, right?  When I plug in the micro-USB, the display counts up from 11 to 99 (by tens), settles back on 13 (for the percentage charged) and the 3 is now flashing.  The flashing three pertains to rule 4 above, “charging.”

As you can see it’s all fairly simple and again, none of this really matters if you just want to throw some cells in and go. 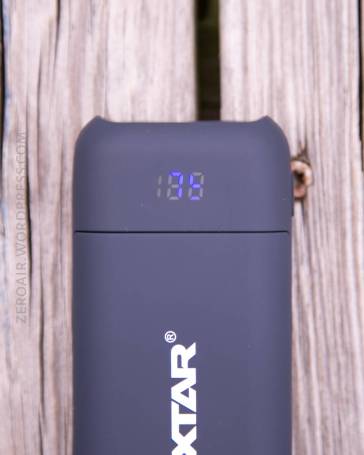 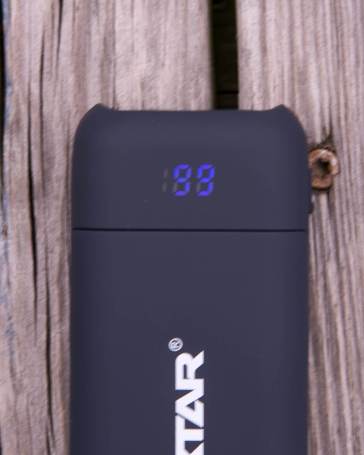 I hope to have a small light to wrap up this week.  Been a long week and just getting back into the swing of things has been nice.  Hopefully I can finish a few of my ‘harder’ items next week, too.  Stay tuned!