GearBest sent over a projector for review.  I think this one’s a hot item at the moment; here’s my review and thoughts on it!  Note I’ve not reviewed a projector before, so this review could be slightly basic for seasoned projector veterans out there; I’m always open to improving my reviews based on constructive criticism!

There are two basic versions of this projector.  One (this one) is basic, and accepts only external sources.  The other, for $30 more, has built in android hardware.  I wasn’t able to test that one.

Both are also available with an EU and US plug.

This same projector is available elsewhere, under other brand names, too.

For my very basic projector needs, this Vivibright has served fairly well.  It’s a good bit louder than I’d want, and doesn’t seem to play well with every HDMI source or USB drive, though. 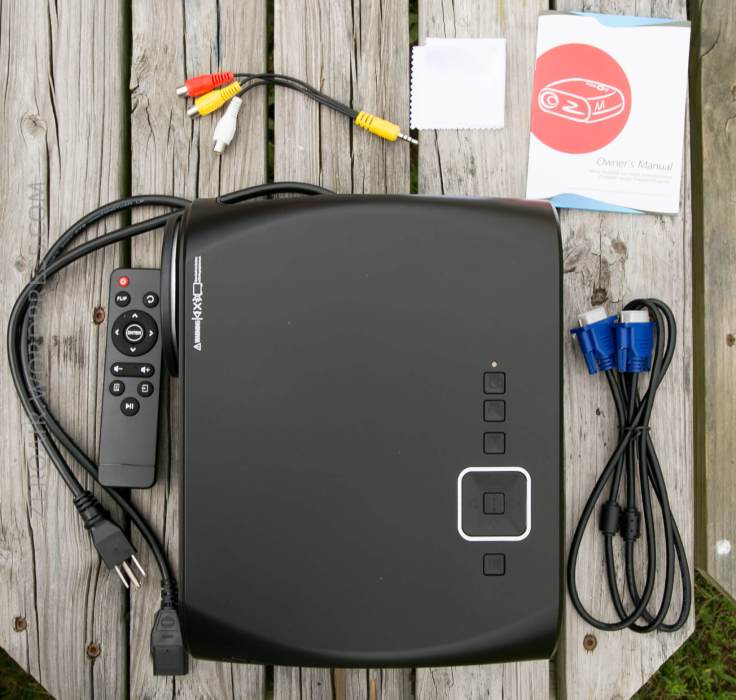 The box is a simple, minimally printed, cardboard box with styrofoam packing inserts.  This is actually the shipping box as well, and my item shipped fine.  The packaging is good. 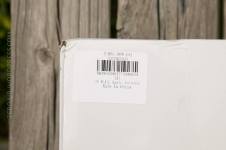 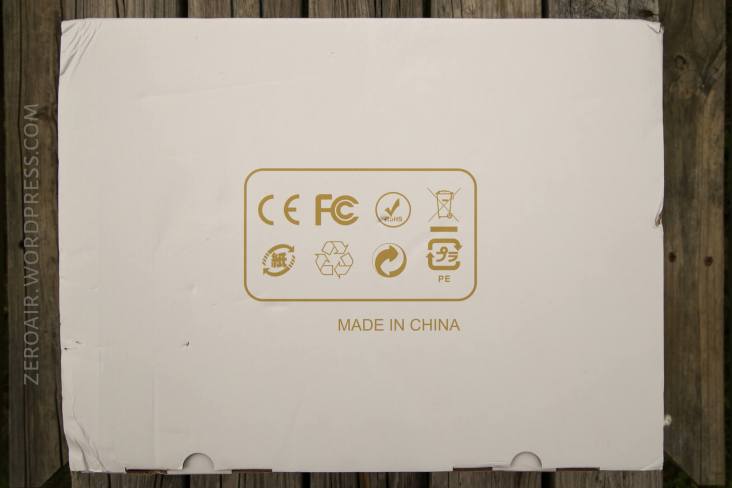 The manual is fine for mentioning specs and features, and generally anything you’d already know because of whatever reason you bought the GP100 for.  It gives limited information on connection (most of which should be fairly obvious anyway).  It gives even less information on what kind of media you can use for example from a USB drive.  And no information whatsoever for troubleshooting if a device doesn’t work over HDMI.  While it’s a very nicely printed manual, it’s bereft of the real details a beginning user might need.

This is a large projector, but the plastic used on the case doesn’t feel extremely high quality.  It’s the brittle type plastic.

The lens is the high point of the build, but without a proper way to evaluate these lenses, all I can say is that it look good and is clear, and allows a nice image to be projected. 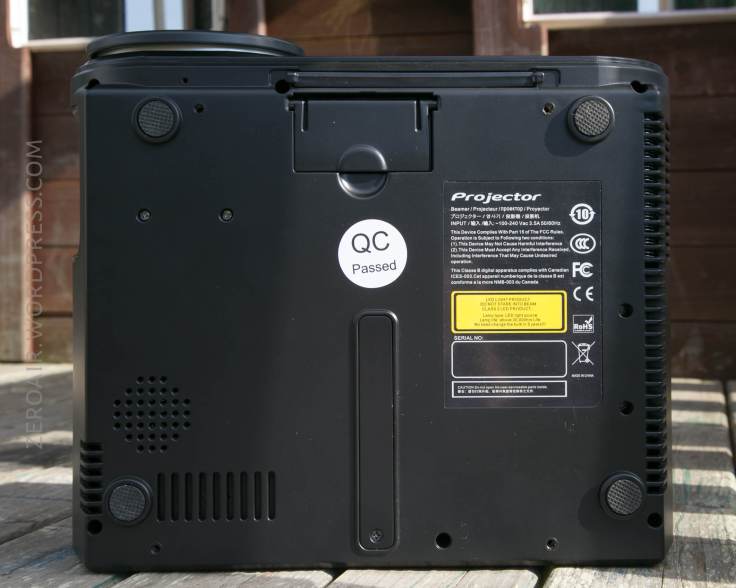 There are minimal adjustment possibilities for the GP100.  Essentially you can see them all below.  Primarily I’m showing the leg which angles the projection up or allows directly horizontal.  The second adjustment is the dial which tilts the image on the plane of the wall, allowing one to account for an unlevel projector.  The third is the dial which allows focusing of the picture. 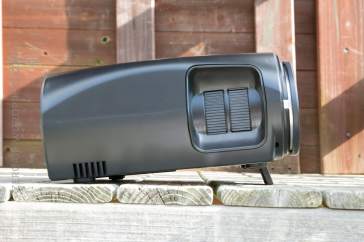 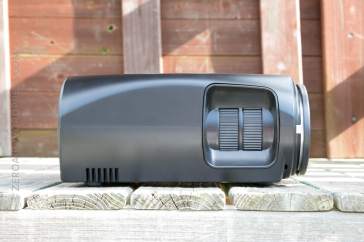 Unfortunately the actual projector picture can’t be adjusted with the projector to be larger or smaller.  The GP100 projects one image, which can be focused (as described above), but to increase or decrease the image size, one must physically move the projector.  Not a huge deal, but for anywhere in my house where I wanted projection, the location I could put the projector wasn’t right for the focus.  When I put the projector in a spot that worked, it was in the way.

This is just my experience.  If you intend to ceiling mount the projector, or place it on a cart with wheels, you’ll have no problems; just mount it where it works.  Particularly permanent installation would render this issue I had meaningless.

The feet (which do not cover screw holes as is often the case) have nice rubber pads to prevent slippage.

Here’s one of the few fans.  Unfortunately this is my main complaint with this projector:  The fans are loud.  Not just “when the projector heats up and gets going the thing turns loud.”  But from the second the projector is on the fans spin up and they are not quiet fans.

Fortunately it’s all fan noise and not case rattle or anything – if you wished it’d likely be very simple to replace these fans with quieter versions.  In fact I had occasion to disassemble the projector (more on that later) and I can say that it’s simple to get into, and access the guts. 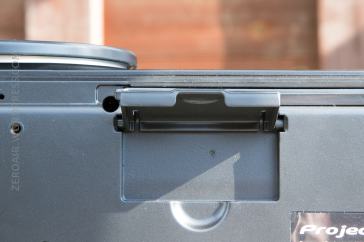 The fans also pass filtered air through the system, and this filter is replaceable.  Though the manual doesn’t state it, I think more than replaceable, the filter is user-cleanable. 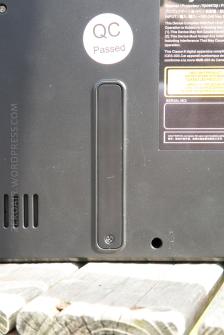 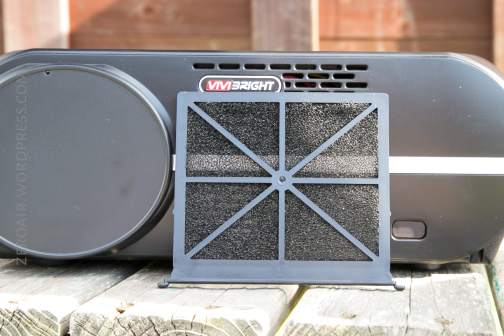 Here’s a look into the guts.  Not much to see.  You can see the remote receiver at bottom right.  (There’s one in the back, too!) 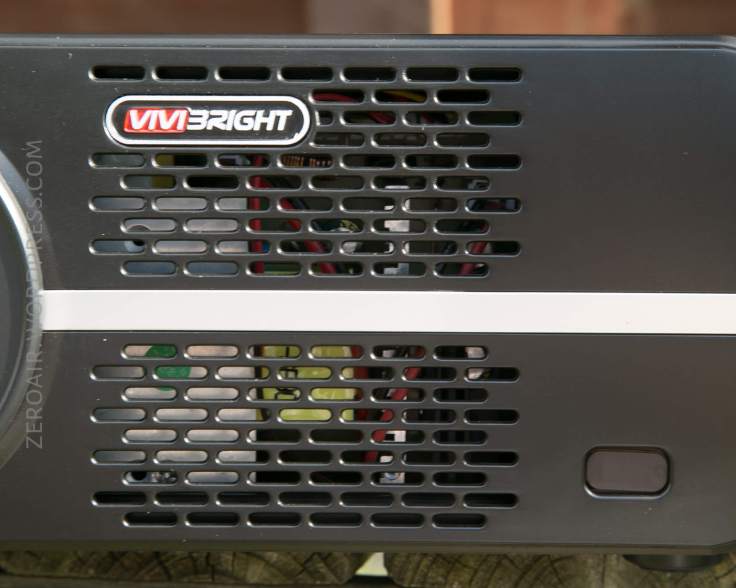 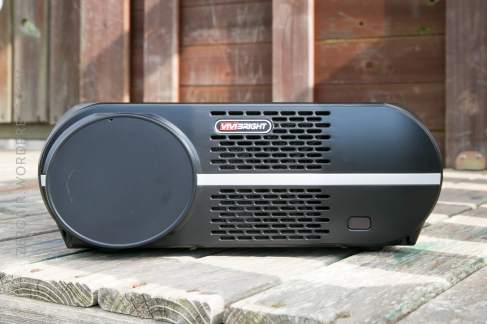 The remote is thin, and big enough to be easy to use.  The buttons are rubber coated and clicky, and useful. 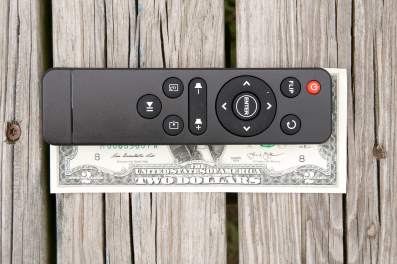 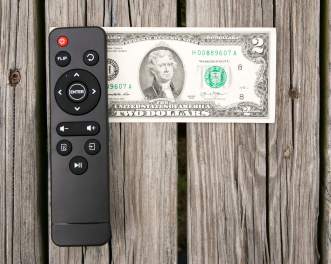 Power is sent to the GP100 by a regular computer power cable (which is included).  It runs on 120V power, but there’s also an EU version.

Here’s the reason I had to tear my unit apart.  When I first plugged my device, it worked momentarily, and then stopped working.  I took it apart and tested everything I knew to test.  At wits end I finally looked at the plug.  You’ll see it immediately I’m sure.  There’s a fuse there.  It’s a 250V fuse.  I opened that little fuse drawer and sure enough, I had a bad fuse.

What makes me feel even dumber; I looked and looked for a replacement fuse, only to finally realize that there’s a spare in the fuse drawer included.  When I swapped it in, the projector worked fine and has worked ever since.  I think it’s a 250V, 20A fuse (but don’t quote me on that).

The remote is powered by two AAA cells.  I used Eneloops.

There are a number of inputs (and a couple of outputs) available.  Seen below are two audio outs, which can be used for running headphones or speakers from the GP100.  Next is the rear IR receiver for the remote.  Then two USB inputs.  If I’m honest I never had luck with the USB inputs, most likely due to having improperly formatted media.  My primary interest is not using the projector with USB, so I didn’t pursue it.

Next are two HDMI ports, which I used extensively.  I connected from my Macbook Pro, and the GP100 worked flawlessly.  I also tried using my recently reviewed GPD Pocket Computer – in fact it was the device I intended to use primarily with the GP100 Projector.  Unfortunately, for some reason, I could not get these two to work together.  I tested the GPD Pocket computer HDMI out on a different monitor, and it worked fine.  So the problem was with how the GP100 received the signal.

The final connection is VGA.

A few connectors are included; VGA to VGA, an RCA dongle, and a power cable.  Unfortunately there is no HDMI cable included, and there should be.

First a control shot.  The situation for photos wasn’t the best, but it’s what I could do.  There’s a window to the left, and these were shot at around 4pm (ie, still fairly light outside).

When you turn on the projector and don’t have any signal input, you get the screen below.

Once you’ve selected an input, but there’s no data being transferred, you get this:

There are a bunch of configuration options, as seen below.  Basically I just left it stock and ran with it – the stock setting were very good for my needs.  Most of the controls are straight forward, but I never understood the purpose of the “Noise Reduction” setting.

Below is what it looks like to select a device.  Once the desired option is hilighted (bigger) 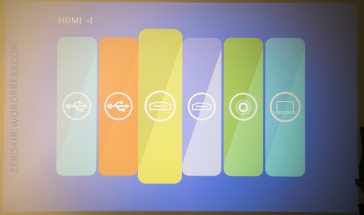 USB is really the only option with sub menus, where you can select between Photo, Music, Movie, and E-book. 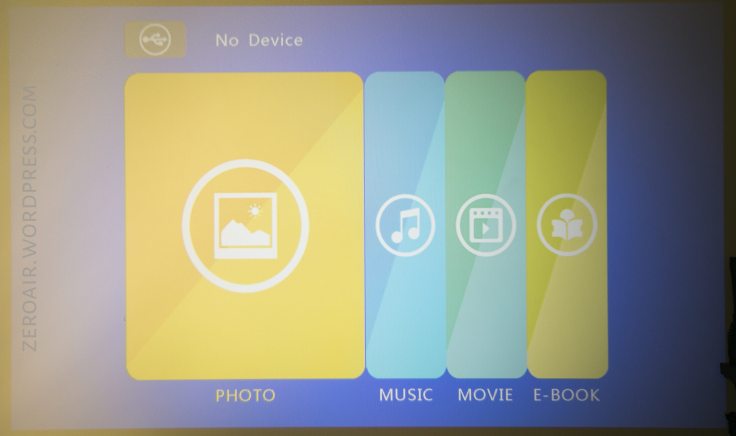 The colors were good too.

Overall a projection experience wasn’t the goal here; my goal was simply projection.  And this projector did great at that.

I’ll have an Olight for review tomorrow!