Along with the XTAR PB2 I recently reviewed, XTAR sent the Dragon VP4 Plus 4 bay 2A charger.  This is an interesting charger, with some unusual features, and I’m glad to give it a test, too!

This charger is currently $84 on the official amazon store.

This is a very capable charger, and the accessory features are neat.  It lacked a thing or two that made it unusual enough to be a little frustrating, and I couldn’t really ‘get’ the UI, but it’s great at charging cell.

This unit ships in a large, highly printed white box. 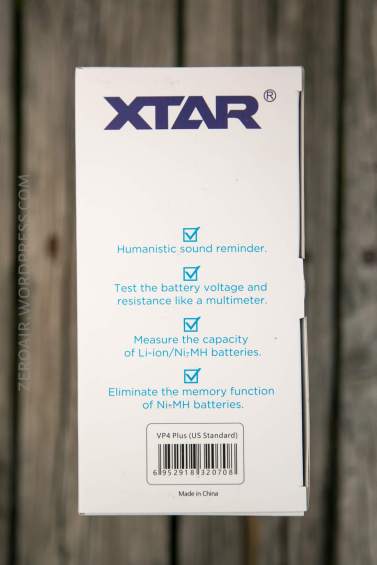 Inside the box is another package – a nylon bag, which holds the charger and all the accessories.

There are even slots for holding the items securely.  The pouch itself is flimsy but doesn’t look suspect.  I think it’ll be good for the limited amount I’ll travel with this charger.

The manual is absolutely necessary, and fortunately just one page (other pages are other languages, 10 total).  The manual briefly but fully explains all the available settings. 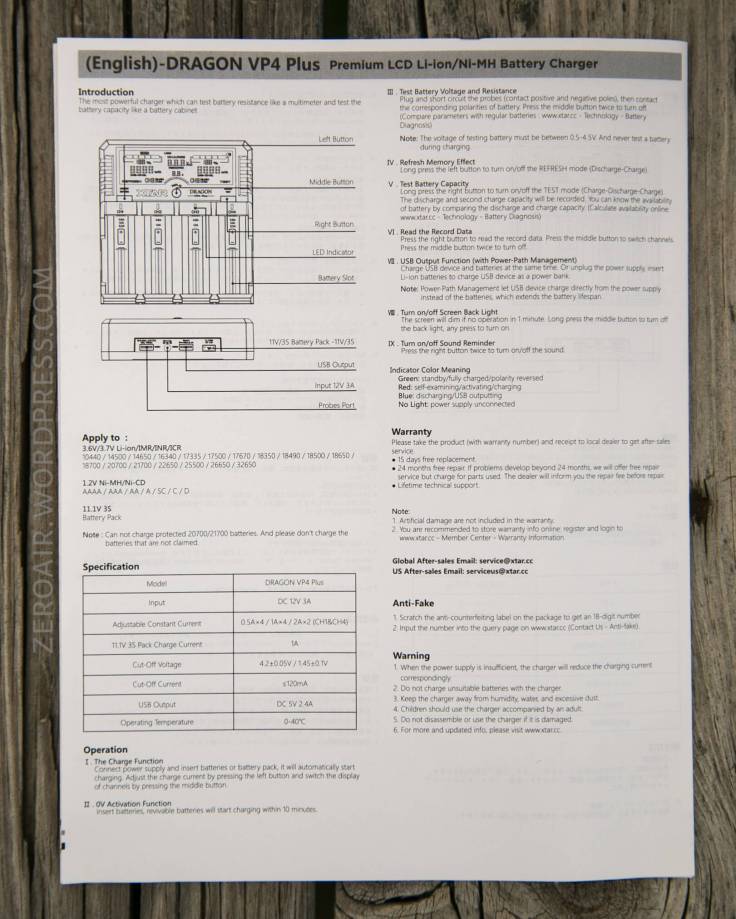 This is a sturdy charger.  It’s quite large; all the bays will fit 26650 sized cells concurrently.  The display is also quite large.

The plastic is nice and thick, and does not feel cheap.  In fact the charger as a whole doesn’t feel cheap (as chargers sometimes do).  There’s no hollow sound from inside when moving the device around. 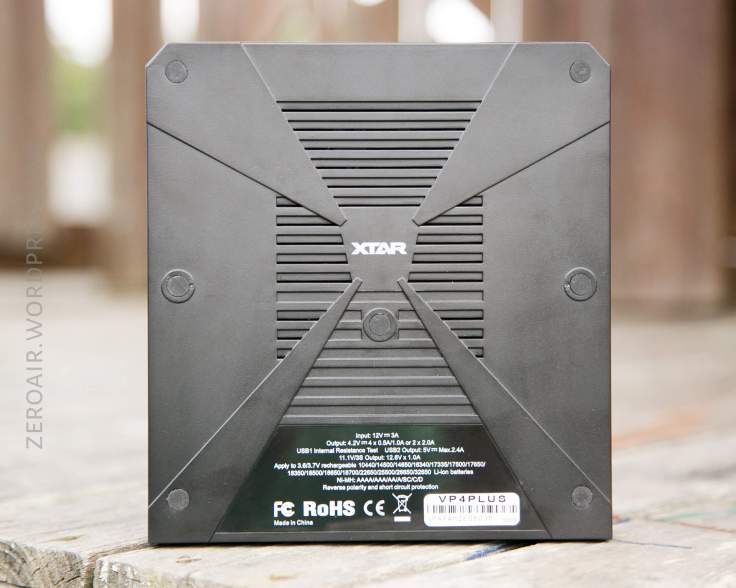 These cooling fins on the sides really are just barely cooling fins – they are open, but the opening around 1mm.  Not much as far as cooling goes.

The bays are labeled.  There are three buttons too, all labeled.

The bays have their own labels, too, at the bottom.  Each has a cell orientation, and an imprint of what currents are available for that bay.  (Up to 2A for the outside 2 bays, up to just 1A for the inside two.) 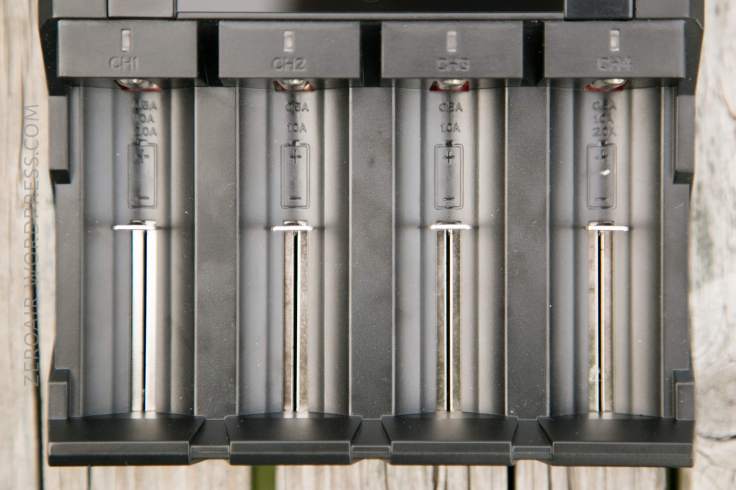 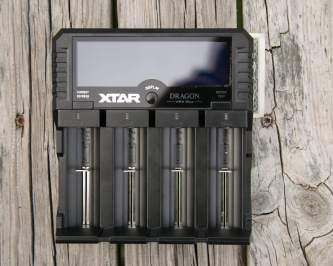 The charger requires 12V power from a barrel plug.  XTAR includes a wall wart, which is 12V and 3A, and also a 12V car adapter for connecting to a cigarette lighter.

The barrel connector plugs into the back/center. This is where all the plugs are (and a little close together for my needs, actually).  I’ll say this later but just to match up with the photo below:  The left most USB in this photo is not USB-out.  This USB port is strictly for connecting the included probes, which are for testing cell voltage.  Then there’s the barrel connector for power, and then the USB-out.  Finally there’s the balance charging 11.1V 3S port, which I didn’t use (I don’t have any 3s packs!) 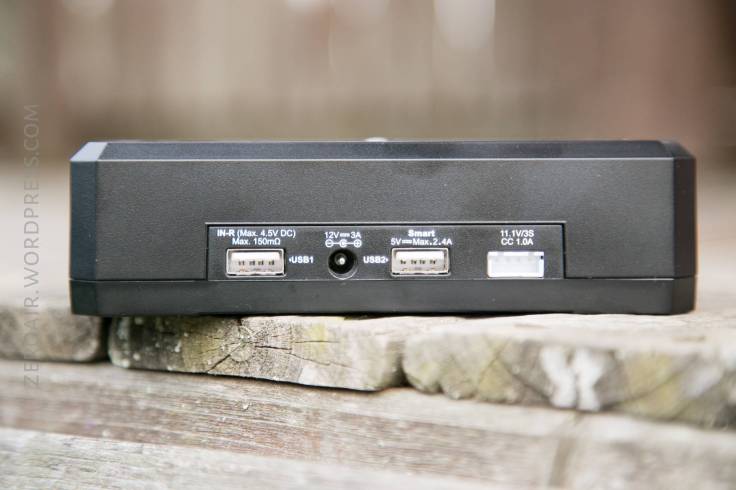 The back also delineates all the cell types that this device will charge.  There are a bunch of things here.  Of course Li-Ion is there.  But it’ll also charge various NiMH cells too, all the way from AAAA to D sizes. 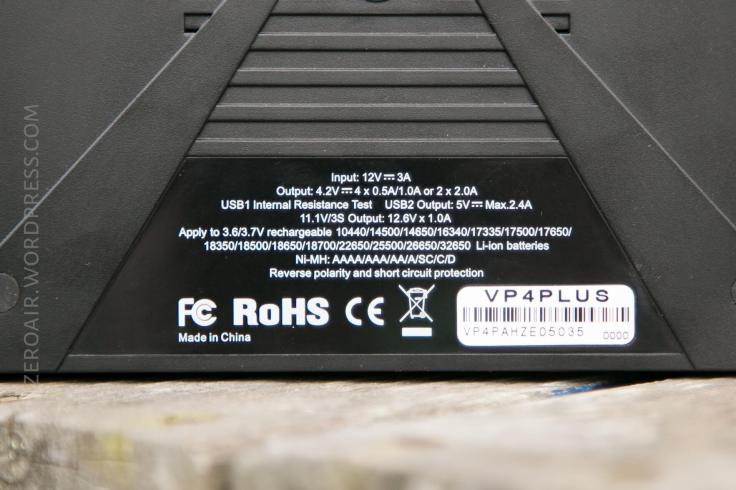 I tested a couple of currents on the 18650 size.  Charging at 1A looks pretty good.  Charging at 2A does in fact hit 2A, but in my test, only briefly.  I think this is ok; likely due to the cell I was using or something like that.

I also tested USB output, when the unit is connected to wall power.  This thing will churn out over 3A before shutting off.  It’ll sustan over 2.5A with a voltage drop to just under 4.8V.  That’s pretty solid output!

It’s also possible to use this as a powerbank – no wall power but having cells in the bays (even one cell), will make USB out function.  Output here is good too (but not graphed).  I pulled over 2.5A from a single 18650, and voltage stayed within spec for USB.  So that’s good, too.

Note that only one of the USB ports may be used for charging.  The “other” is strictly for connecting the probes.

There are only three buttons on the VP4.  They’re all quite clicky, and are labeled well. 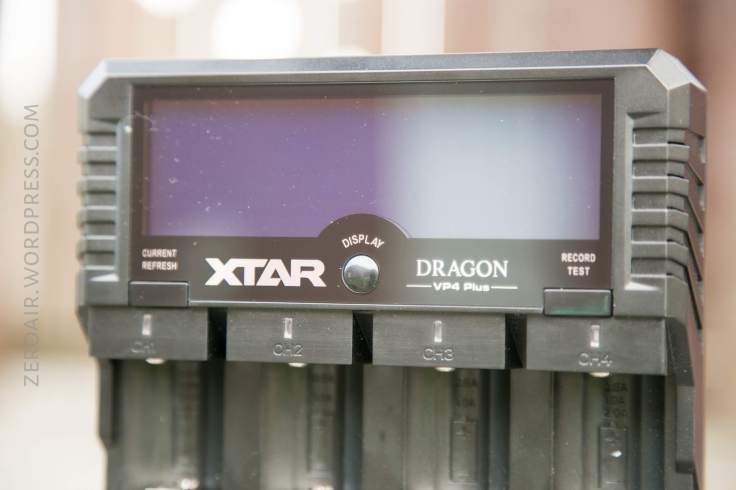 On the left is the “Current Refresh” button.  Center is the “Display” button.  Rightmost is the “Record Test” button.

First of all, to use this charger you actually don’t have to do anything.  Just drop in some cells and they’ll start charging.  Default charge speed for 18650 seems to be 1A.  The display can only show two cells at a time.  It will show Bay 1 and Bay 4 together, and Bay 2 and Bay 3 together.  To switch between the bays, click the Display button (this wasn’t intuitive to me, as with many of the things on this charger).

There are a bunch of modes to pick through.  Here’s a brief list:

Each bay also has it’s own LED indicator, which can be Green, Red, Blue, or off.  They indicate as follows:

The Refresh mode performs a Discharge/Charge cycle.  This is started by long pressing the left button.  Pressing this will cause Refresh to start on all bays with cells.  The screen will display “REFRESH” and each bay will have displayed “DIS-CHG.”

Long pressing the right button will invoke a similar mode: the Test Battery Capacity mode.  This is a Charge > Discharge > Charge cycle.  Xtar provides a website for utilizing this data, though if I’m honest, the data it provides (a percentage) is something you should be able to calculate yourself.

The charger actually stores these data, too.  To read them back, short press the rightmost button.  Clicking the Display button will cycle through the bays.  Pressing the middle button twice turns off the “read data” option.  Pressing the leftmost button will allow viewing of older recorded data.  It’s not stated how many records may be stored, and the charger isn’t storing data about the specific cell (ie you can’t store the data and then charge the same cell later and compare that data automatically).  So here again, I’m not sure how useful this feature is from a logging standpoint, but it’s nice to be able to do this, and the charger is certainly capable.  But looking back at old data?  Not something I’m going to use, especially when the data can’t be named or signified in any way that this is data for a specific HG2 or whatever – you’d have to keep up with that separately.  I’m not actually sure how many records can be made, but the display allows three digits.  So possibly as many as 999, at which point I’d imagine the data rolls back to 001.  (The manual doesn’t cover this.)

Let me just say that the are bright LEDs.  Much too bright in my opinion.  The screen backlight can be dimmed (Long press the display button).  It’ll also dim automatically after a minute (but long press actually turns it off).  But these LEDs… these leds can’t be adjusted, and are just too bright.

Some of the options above aren’t strictly “bay” options.  Option 3 for example, regards use of these probes, which connect to the USB port labeled “IN-R.”  Just connecting them isn’t enough – to activate them, you’ll need to touch them together.  It’s important to note that these are good for testing only up to 4.5V.  They will test voltage and cell internal resistance.  They’re neat but…. Most chargers which can test IR and V do this within any of the bays, and display this information through out the charge.  So what is added here is basically the ability to test a fifth+ cell, when all the bays are full.  Not that the bays display voltage on their own….  So it’s a bit of a confusing addition, particularly since they can’t be used over 4.5V.  The charger can handle over 5V, since it’s got the 11.1V balance plug…. but these are only good for 4.5V.  Also the internal resistance measurement is a bit suspect.  For one cell, tested a few times repeatedly, I was seeing 30, 33, 43, etc.  That’s fairly big differences across the board with those readings, which means that I’d never take them as more of a guideline than firm fact.

I’ll give these probes a “they’re neat” but that’s all.  I don’t find them useful.  They are well made, though. 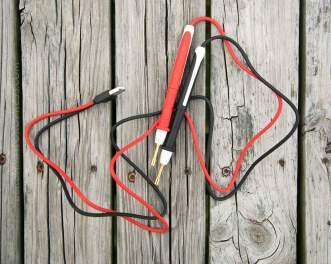 The “Power-Path management” just means that the charger will favor wall power (passthrough) instead of cell power when the USB-out is being used.

To turn off the sound, press the right button twice.  You’ll want to do this immediately. 🙂

I like that there’s a 3s balance charging port on the back of this charger, but I’m not sure how useful it is.  If you happen to often need to charge this type pack, then it’ll be perfect.  One of my complaints about the SkyRC MC3000 was that it didn’t have a port like this, and now this one has it and I still can’t be satisfied.  It’s a neat addition in any case.

Tomorrow I hope to have a bit of a special light completed for review.  Stay tuned!

One thought on “XTAR Dragon VP4 Plus Analyzing Charger Review”