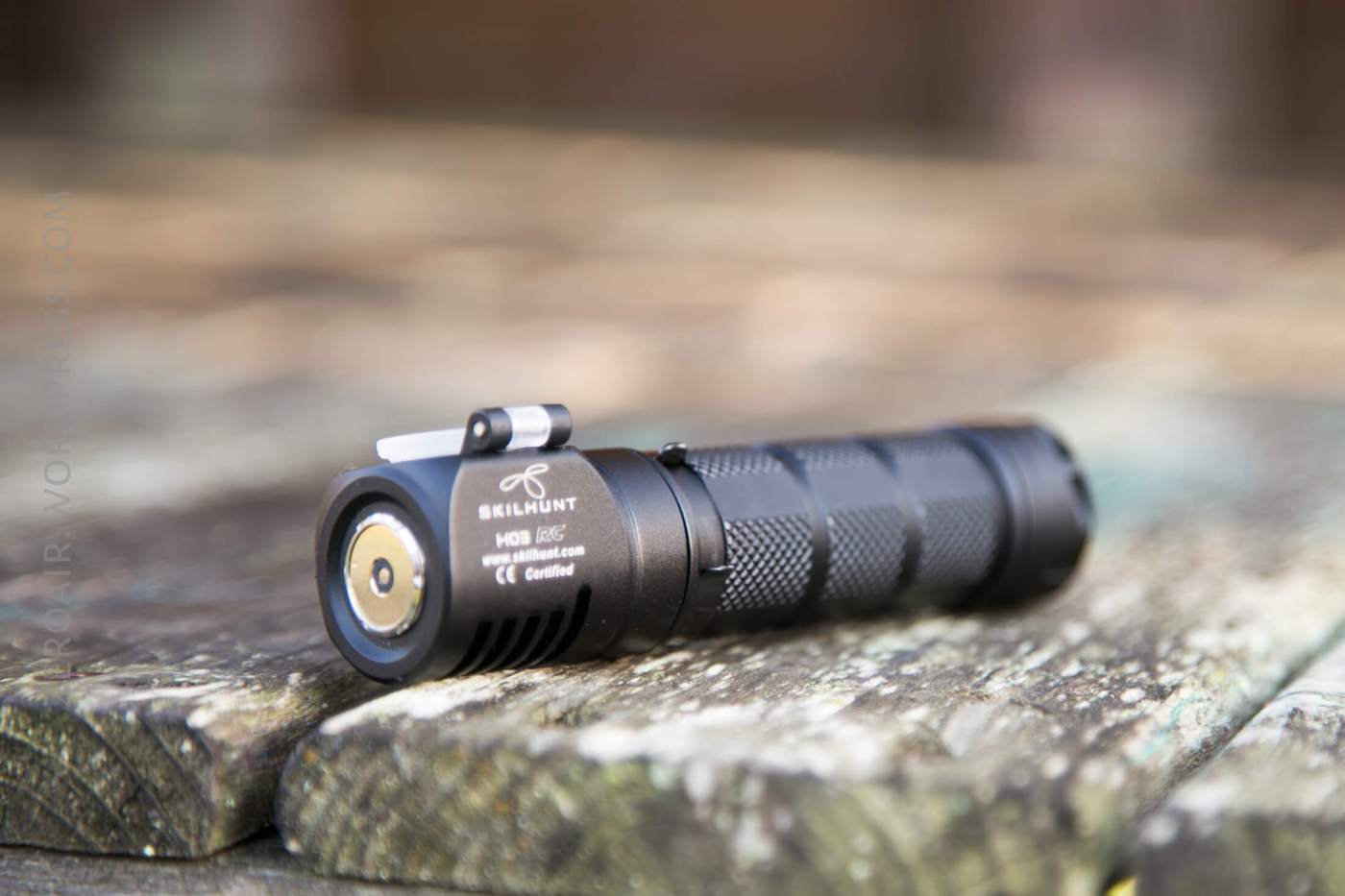 An update to he extremely popular Skilhunt H03 is the H03 RC.  The RC version adds charging, and not much else.  It’s a very nice package; read on for more!

I like this light as much or more than I liked the non-rechargeable H03.  That was a rare light that I still have and love.  I don’t care for the proprietary connector on the H03 RC, but it does charge very capably.

Skilhunt uses a nice cardboard box, which is covered in a slip-over, embossed sleeve. 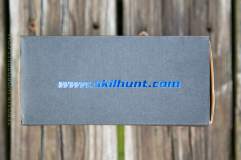 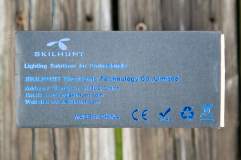 The box itself has a sticker to show which light exactly you have in your hands, and GearBest has added an inventory sticker in a place that covers no other information. 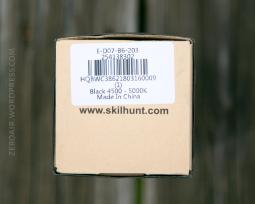 The light is held in place in some foam, which is over a cardboard shelf.  Once all that is removed, the accessories are accessible. 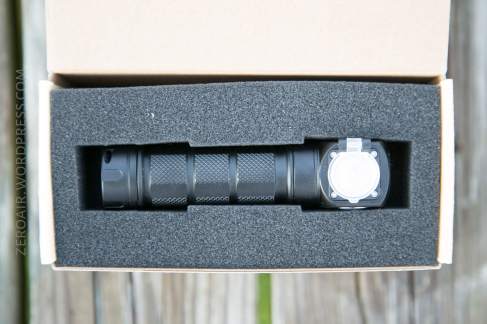 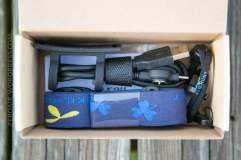 The manual is quite good.  It’s a small booklet, with a lot of text, some good illustrations, a useful table, and a fine description of the UI.  It looks a little busy, but it’s quite good. 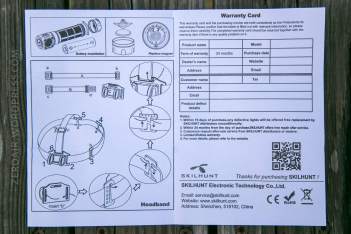 I haven’t had a bad build-quality Skilhunt.  Every one is well made, nicely fit together, and works like it should.  Absolutely no complaints about this light. 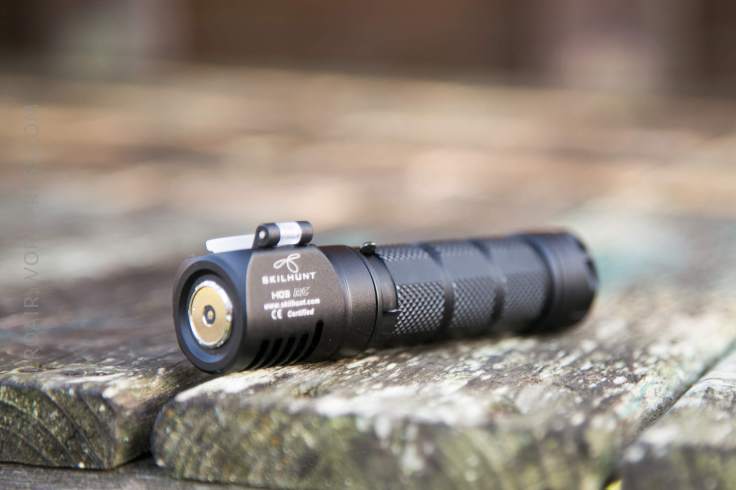 The anodizing has held up to all of my use and carry, and is still flawless.  The corners are rounded enough that the anodizing doesn’t get damaged or chipped easily.  The head has a few deep fins directly behind the emitter. 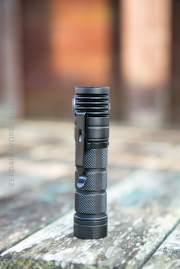 The threads are anodized, and also square cut.  Both are features I like!  This means a physical lockout is possible by unscrewing the light minimally.  The knurling is diamond pattern, but flat.  There’s just enough grip, but it’s on the soft side.  The knurling is broken up by four flat sides.

There’s a spring on both the head and the tail end.  The tail end spring is removable, and the magnet may be removed. 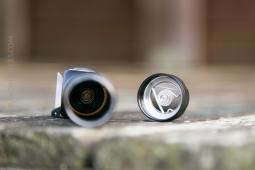 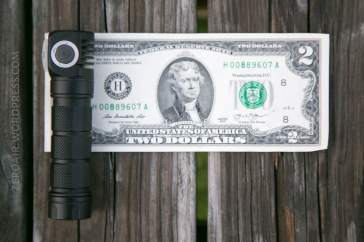 This is just ever so slightly bigger than the H03 (not RC).  (1.6mm longer, and 0.4mm thicker).  it’s really a meaningless difference in size.

And of course, much shorter and thinner than the Convoy S2+. 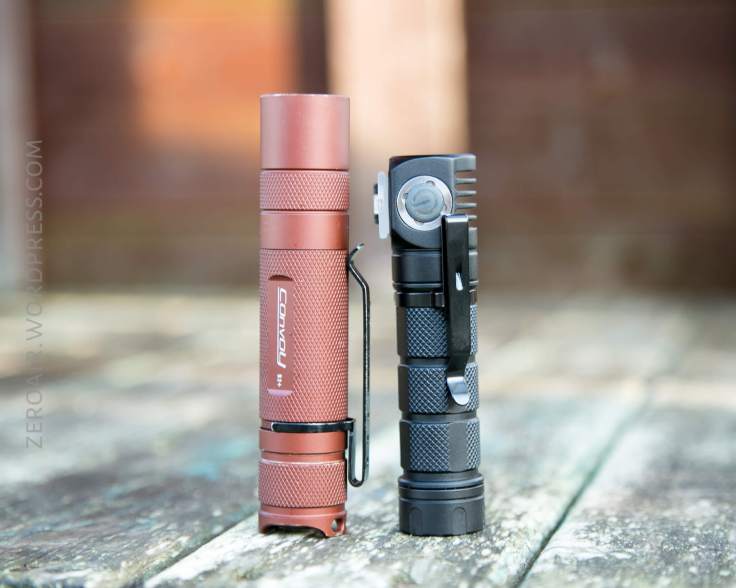 As this is a headlamp (even though I never use it that way), the primary means for carrying the light will always be the head band.  The light holder, which 3-point-attaches to the headband is silicone and easy enough to get the light in and out of.

The light will fit in the holder with the pocket clip on, though I’m not sure this is the ideal setup for the headband, as it cantilevers the head weight. 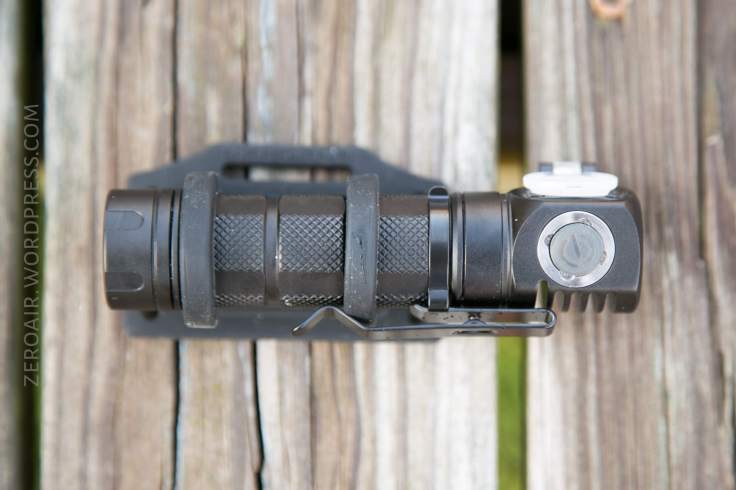 The headband is a nice one.  There’s a reflective patch directly on the back (if you set the band up that way). The band is very adjustable, and could be a little intimidating to install.  But there’s a very clear graphic in the manual describing how to use it. 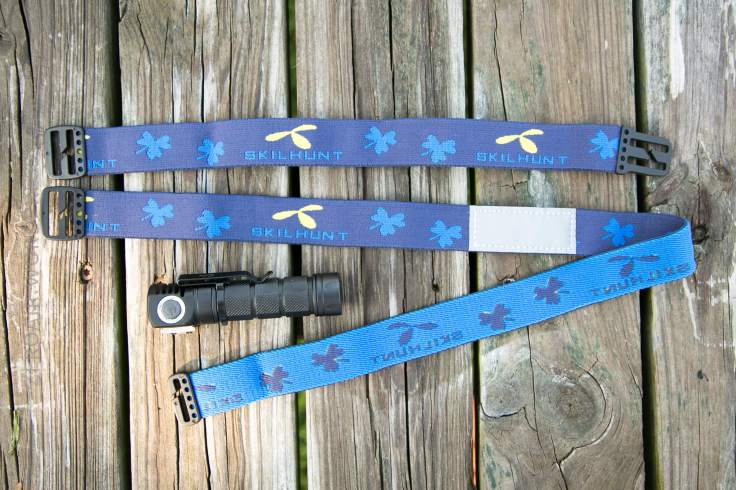 Next is the pocket clip, which fits only in the “head up” direction.  That actually makes me a little said – if there was a fit groove on the tail end, then this would be a proper deep carry clip.  As it is, it’s not really.  The clip is also the type that has a little bump out, probably designed to hold in the pocket tightly, but it’s too tight for me, and I don’t care for it.  But the mouth of the clip is big, and it does work well, so I’ll call it a fine clip.

Also included is a lanyard, and it attaches on the tailcap.  There’s a large cutout, through which the lanyard is attached.

And finally, the magnet.  It’s not an extremely strong magnet, to be sure.  It’ll hold the light on a big metal surface horizontally just barely.  And if you don’t like the magnet, Skilhunt includes a rubber piece which can replace the magnet, and still allow normal operation.

The H03F RC is powered primarily by a single 18650.  Since there are springs on the head and tail, any type of 18650 (flat/button, protected/unprotected) will work.  There’s a sticker just inside the tube to indicate cell direction.  (And like most lights, the cell direction is “positive toward head.”)

The light may also be powered by 2x CR123A or 2x RCR123A cells.  This provides marginally more output, but at the price of a much shorter runtime.  I didn’t have married cells or primaries on hand to test this scenario.  Do not recharge 2x RCR123A cells in the light! 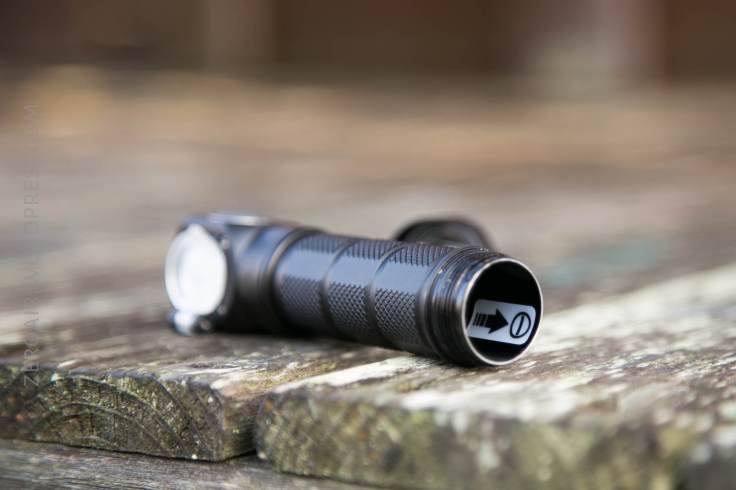 Here’s a runtime on Turbo.  That is, T1, the highest mode. Stepdown is at a respectable 1.5 minutes, but doesn’t seem to be related to temperature (as the light never heated up past 36°C.  The stepdown is approximately to T2, around 500 lumens.  I didn’t perform any turbo resets in this run, but I did check the cell voltage a few times late in the run. 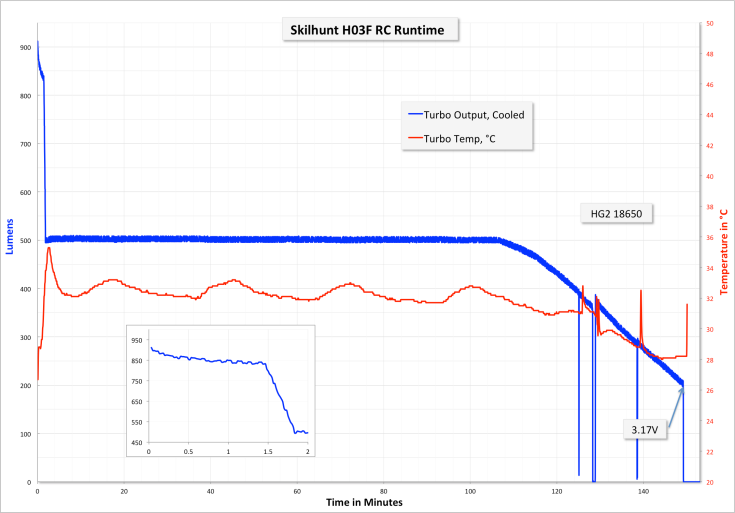 T2 looks just like T1, minus the T1 output.  This is a pretty solid chart, holding steady at the starting output for almost 2 hours.

Here’s the big update on this light!  On-board charging.  This is done by means of a proprietary connection on the head.  Skilhunt includes a cable too, of course.  The cable has a red and blue LED to indicate charge status.

Now look at this cable right here.  You may be saying to yourself, “Self, is that a USB-C connector there on that charge plug?”  If you thought that, you’d be thinking right. 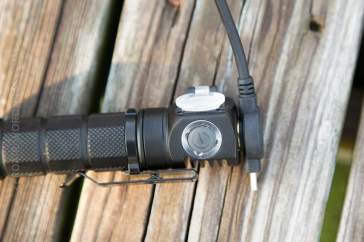 But I have some bad news.  I can’t figure out what the thing does!  I can’t get the light to charge from a connected USB-C plug.  And while it does output power from the light to the USB-C, the power is well below USB specification (ie, on a fully charged HG2 18650, USB out was around 3.5V and 0.3A – completely useless.)  In other words, don’t get your hopes up about this connection.

The connector on the cable has a tiny springy pin in the center, so that it knows it’s connected to the right thing before charging.

The charge graph looks strange – CC rises constantly through the cycle, and then isn’t an abrupt switch to CV as you’d normally (and hope) to see.  Still the cell isn’t overcharged, and it is charged consistently (two tests, below).  Those are 2.86 to 4.19V and 3.11 to 4.20V.  So it’s good charging.

A note about Low Voltage Protection.  This light has it!  At 3.1V, the red switch will double flash.  At 2.9V, the switch begins to triple flash.  And at around 2.6V, the light shuts off.

And a note about charging.  Though the terminals are exposed on the top of the light, I could not short them.  I wasn’t able to do the steel wool test (u/zak), but I got very thin piece of wire, and was not able to short the terminals.  I also put a Fluke across the terminals, and while there’s a very quick, single spark, the power doesn’t flow freely by any means.  (And this doesn’t harm the light – it works fine after.)  So it might be a perfect setup for charging, but at least it doesn’t seem dangerous.

There’s a side indicating e-switch on the head of this light.  Something I now know I didn’t like as much about the [older] H03 is the button.  It was proud, and flat across the top.  This button is less proud, but contoured across the top.  The edges are extremely pleasant to manipulate.  It’s hard to describe this exactly, but I love this button!

It has a single indicating LED, and it’s red.  Used as a beacon, it flashes every other second.  It’s quite clicky.

I’m sure I said it about the other H03, but I love this UI.  It’s like a simpler version of the Zebralight UI.  It has 8 very easily accessible modes (something I wouldn’t say about Zebralight.)

Skilhunt puts a Cree XM-L2 U4 emitter in this light.  This particular light, the “F” version has a very lightly orange peel reflector, and a hinged optic which acts as a diffuser.

The beam without the diffuser is a fairly tight spot, but with a lot of spill.  The diffuser hinge is visible in the beam profile, but not in the deal-breaker type way.  (Anyway, if you didn’t want that, there are other versions of this light better suited to your needs.)

The beam with the diffuser in place is very much floody.  The optic causes a very noticeable ring at the very edge of the beam profile, very much like an aspheric type light.

Now, do like this design?  With the hinged door diffuser?  It’s ok.  I wouldn’t buy this model most likely – I’d get the orange peel version.  But this one seems sturdy.  I just don’t like how far the hinge sticks out from the front of the light! 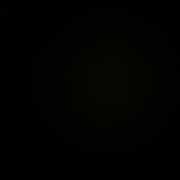 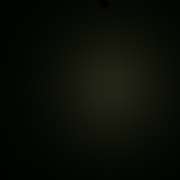 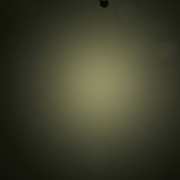 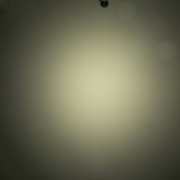 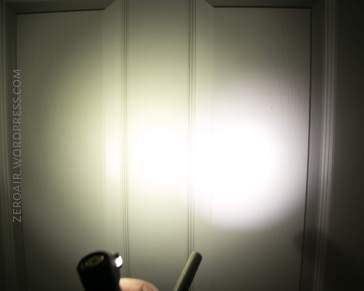 This is a fairly saturated market.  But when you narrow to lights with on-board charging, the list becomes much smaller.  And there are certainly some other compelling choices, like the Nitecore HC65.  But as for a light that’s more of a “right angle” and less of a “headlamp,” I think the H03 RC wins.

I have more in store!  Just not sure what I have next!  Stay Tuned!