Today I have another Sofirn light.  I’ve reviewed a couple before and I find them to be good values.  Let’s see how this 18650 EDC style light stacks up!

This is version 2.0 of the SP32A.  Among the V2.0, there are three body colors, but the lights themselves are all the same.  There’s a black (seen here), pale gold, and silver option.  There is also a bundle option, which includes a single bay charger.  What I have is the bundle option.

This is a very neat light, and special with it’s two mode groups.  One of those groups is a ramping group, which again, is a special feature.  With the light being a “full package” light, and having an indicating switch and everything, I find this to be a good value package.

The box is a highly printed but fairly generic box.  The light is held in place in a plastic tray.

As has been the case with the other Sofirn lights I’ve handled, this one is well built.  The anodizing feels good.  Nothing is sloppy about any part of the light. 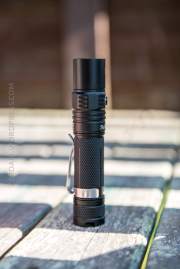 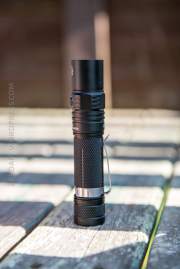 I don’t care for this type clip, but that’s not to say it’s bad.  My opinion is that it’s just a cheap style clip.

The head and tail unscrew completely, but to be sure, I don’t see how to break them down further.  Either the driver side is put in from the top of the light (reasonable, since this is an e-switch light), or it’s press fit.  The tail cap is uncomplicated, though, with the spring being the only piece. 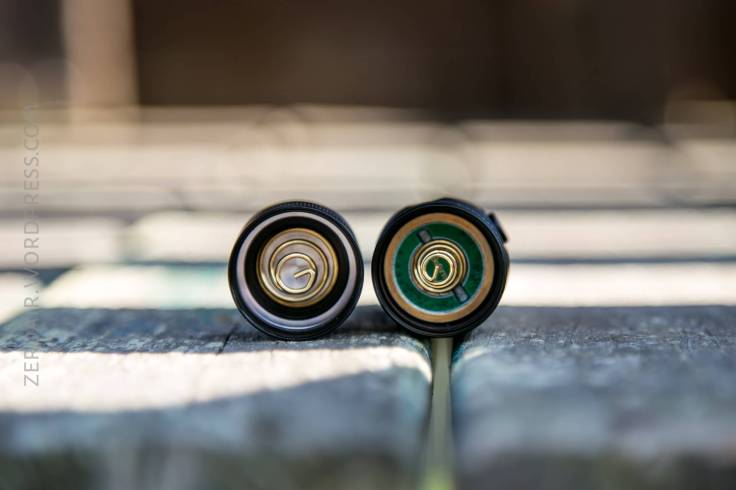 The threads are anodized, and electrical contact is made on the flat surface of the cell tube.  This does mean that very minimally unscrewing the head or tail will mechanically lock out the light.  Also, the cell tube is reversible. 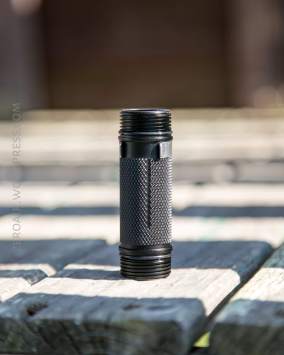 The SP32A V2.0 is a little longer than the Convoy S2+, but slightly thinner in the body, too.

A pocket clip is shipped installed on the light.  This clip isn’t “reversible” but the cell tube it lives on is, so effectively, the clip can be arranged for bezel up or down carry.

It’s not my favorite type clip at all, but it does hold securely. 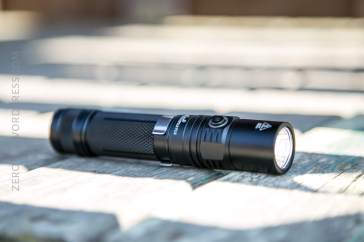 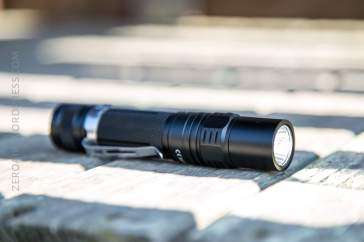 Second is the lanyard, which attaches in this hole in the tailcap. 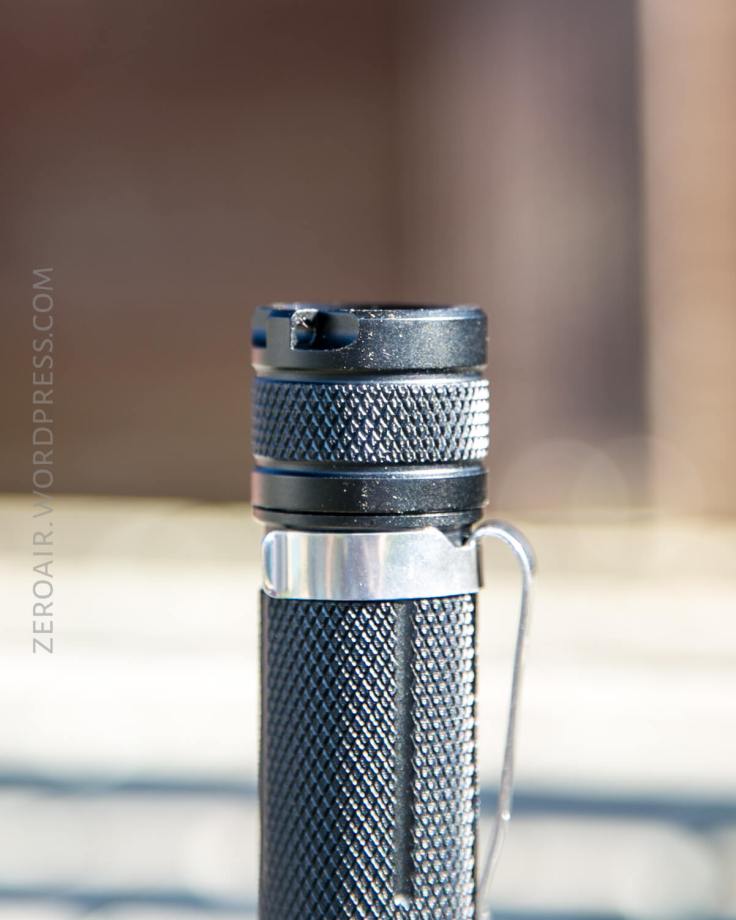 Sofirn includes the cell needed to power this light.  It’s an 18650.  Theirs is a button top, but flat will also work.  There aren’t really any special power requirements – just about any usual 18650 will work.  High drain is not required.

Below is a runtime on Turbo.  Turbo starts at about 1270 lumens and steps down to “High” soon after.  Turbo can be restarted, and reaches nearly initial output. 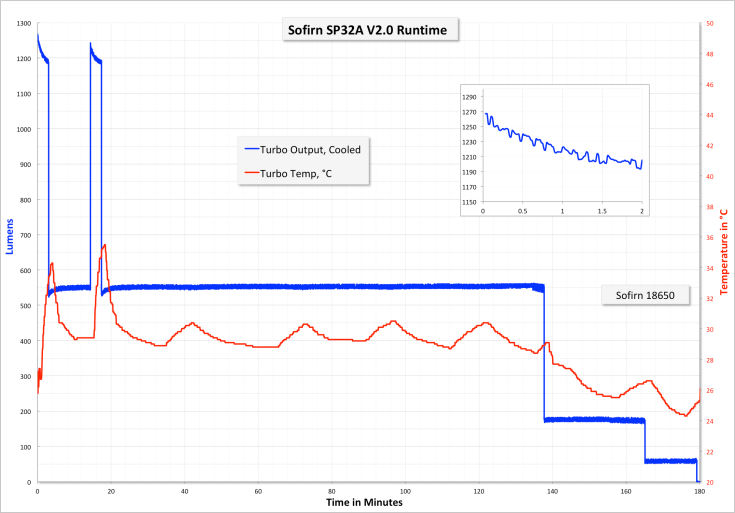 Here’s a runtime that I started on Medium, and finished on High.  It’s a bit of a dumpster fire, but does show some needful information:  Both Medium and High have flat output.  And High steps down to medium exactly, and from there, to Low.

The light doesn’t shut off, either.  It’ll eventually give a warning on the switch – first a solid red, then a slow flash red.

The kit package from Sofirn also includes a nice little single bay charger.  It’s powered by micro-USB, and a cable is included.

I reviewed this charger in the C8F review.  If you’re interested in more information about this charger, please see here: https://zeroair.wordpress.com/2017/11/02/sofirn-c8f-flashlight-review/ 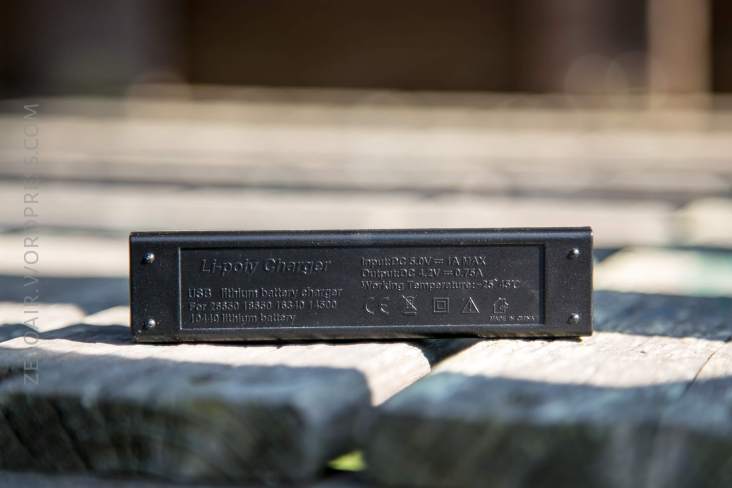 The SP32A V2.0 has a single side e-switch, with an indicator led of red and green.  It’s a small switch (in diameter) but quite proud.  It’s easy to locate by feel.

Notable about this light is that there are two mode groups.  One of those groups allows infinite ramping from the lowest to the highest mode (and back!).  The other is a traditional e-switch.

Here’s a UI table for the non-ramping (default) mode group!

The ramping mode group is good.  The ramping is “infinite” (ie there aren’t discreet outputs, and the ramp is very smooth.)  When either endpoint is reached, the light flashes once, and begins ramping the other direction.  A short click turns the light off in this group.  The light always has mode memory too, and there are no shortcuts to low.  Shortcuts to Turbo (double click) and Strobe (triple click) still work, though.

Sofirn has opted for a Cree XP-L2 for the SP32A V2.0.  I don’t have much experience with this emitter.  The reflector is smooth and deep (for a tube light) and provides a beam with a flat hotspot, and more corona than spill.

There seems to be only one competitor for this light, if you’re set on XP-L2.  That’s the Zebralight SC64c.  Zebralight is a high quality brand, with a nice UI and great build quality.  It doesn’t have ramping or an indicating side switch.

If you’re less concerned about the emitter type, this light is still a great choice, since the full kit is available for $27 (with the coupon at the top of this review).  The kit includes cell and charger, making this a great stand-alone unit.

I’m thinking I’ll push everything else I have for this week, to next week.  I have a bunch of work to do on those reviews, and I don’t want to rush things!  Thanks!