I’d asked over and over for the Q4 charger from Nitecore, but it just never happened.  Then they went and upped the bays by 2, and made the Q6!  I’m happy to have one of those in for review!  Thanks Nitecore!

This one’s going for around $35 MSRP, but street price puts it in the $30 range.

I love the simplicity of this charger, and it’s plenty fast for my needs.  There are scenarios where I’d like a button to do a few things, though, so I do miss that.  But as far as “drop it in and charge,” it doesn’t get much better!

Typical Nitecore black and yellow packaging!  Most of the specs are on the box, and a photo of the item, too.

Here’s a pdf manual, which includes how to use the charger, but more of just specs and things, since how to actually use the charger is very, very simple. 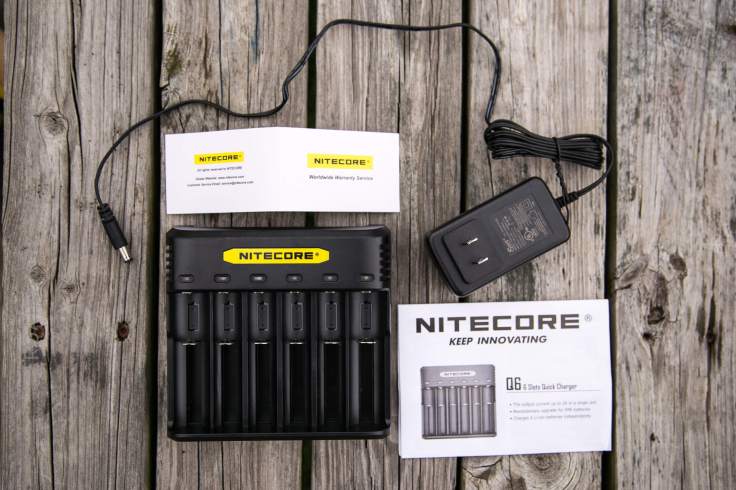 The plastic used on this charger is pretty typical Nitecore plastic.  One reason I always wanted to see the Q4 is all the colors offered (yellow, pink, clear, black).  I’d love to know how those hold up!  But this Q6 is fairly standard plastic.

The metal contact points work as they should.  Nothing exceptional either way. 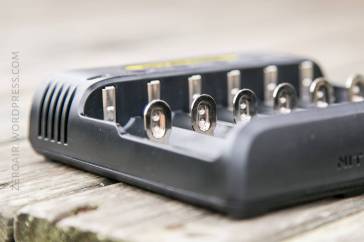 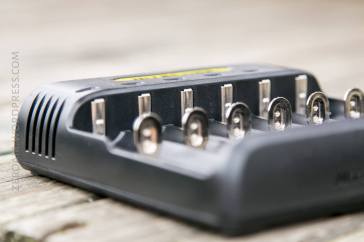 There’s a barrel plug connection on the top of the device, and it requires 12V input.  The barrel plug isn’t the same size as all my other 12V plugs.  It’s bigger.  So while they do work, they don’t make perfect contact.  You’ll want to use the wall wart that Nitecore included, and/or be careful that your regular 12V plugs fit and make proper contact. 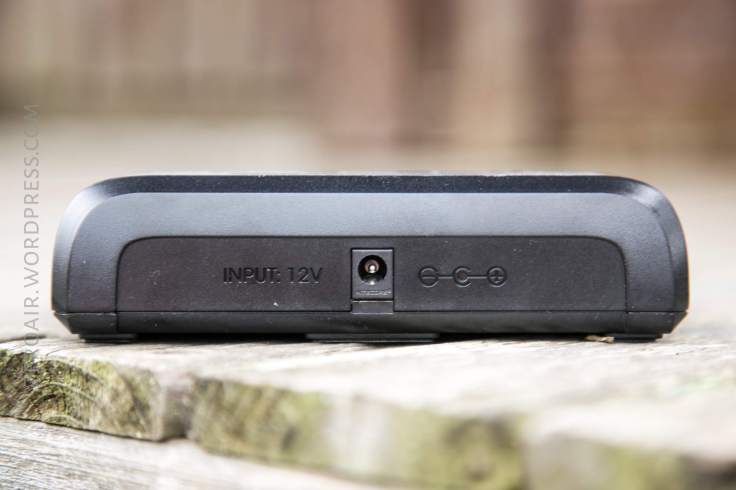 The bottom has some nice Nitecore branding.

The back does list all the chemistries that are acceptable.  Really it’s only Li-Ion cells (no NiMH!).  A bunch of different sizes, but no really small cells. 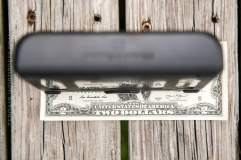 This isn’t a huge charger.  Certainly for being 6 bays, it’s very reasonably sized.  Four of the 6 bays are generally 18650 sized, but the outer two bays are wider, allowing for charging of 26650 cells more easily.

As mentioned above, the power is from a 12V, 2A wall wart, with a big barrel plug.

This barrel plug connects at the top of the charger.

18mm diameter cells don’t even protrude over the front of the device, but 26mm cells will.  (Ie bay depth is around 22mm.) 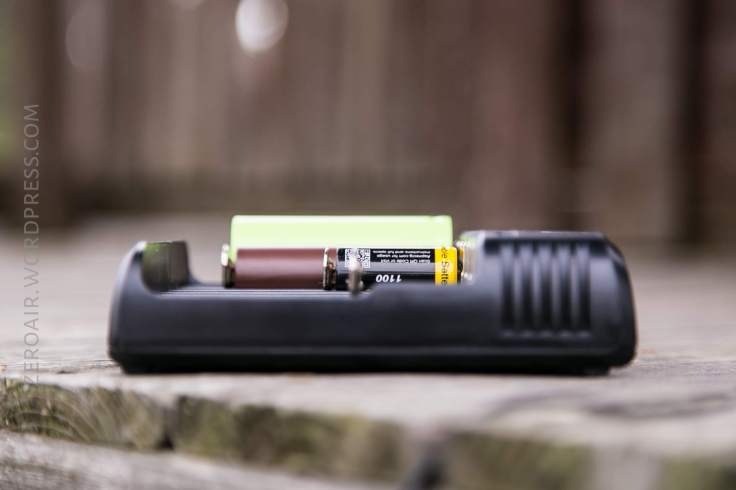 Also, note how long the bays are.  This charger is very well suited for your longer cells, like 20700/21700, and other 70mm long cells.  (In fact, this might be my first charger that has such space, allowing longer cells!)

There are a few things you can note however.  The bays are grouped.  From left to right, bays 1 and 2 are a group, then 3 and 4, and 5 and 6.  Any group can not exceed 2A at any time.  Say you’re charging 2 cells.  We know the charger has a 4A limit overall.  That’s if the cells are in different groups.  So if the cells are in bays 1 and 3, then the CC phase should be as high as 2A.  However, if the cells are both in one group, say, bays 1 and 2, then you’ll still be limited to 2A of the group.  Ie 1A average per cell.

Is this a way to modulate how fast a cell is charged?  If you don’t want to charge your smaller cells like a 14500 at 2A, for example.  No it is not.  See the messy looking graph below.  When two cells are in the same group (ie bay 1 and 2), the charger doesn’t split the current between them.  It pulse charges the max current available for ~10s on and off.  Pulse charging isn’t specifically bad for cells, so this isn’t a problem, but it’s definitely something to note for using the charger.

Otherwise the charger does what it’s supposed to.  2A charging actually is 2A.  And when 2 cells are being charged (in different groups), they both do charge at 2A.

I hope to finish the RovyVon A5 keychain light for tomorrow!  Not sure where the rest of the week will take me though!