Thrunite has a new headlamp on the market and it’s a beast! It’s the TH30, which claims an incredible 3350 lumens, and is a complete package type light. Read on!

Two versions.  One is cool white, and one is neutral white.

This headlamp lives up to the claims Thrunite makes! I like the full package nature of it, and overall it’s just a solid contender.

The package is a normal Thrunite box.  It’s got a Thrunite branding and a checkbox for NW or CW. 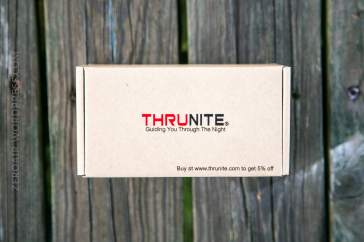 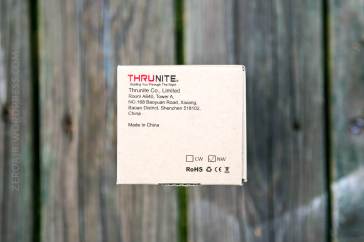 The manual is typical Thrunite, and just fine.  I like that it’s small, but complete.

This is a well built light, with a couple of nice touches that make it stand out.

The first thing I noticed is that the reflector and emitter on this light are just … different.  Surprising, I don’t know – just “wow that’s a big emitter in a small light!” 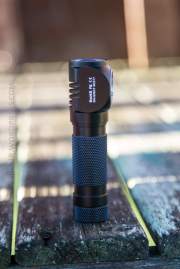 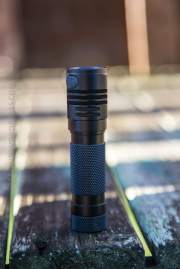 To deal with the heat from that big emitter, the head has some deep, thick cooling fins.  The knurling on the body and tailcap are diamond pattern and quite grippy.  The knurling isn’t aggressive enough to be hard on skin, but could be on pockets (if you opt for the pocket clip.)

Here’s a very minor teardown, with just the head and tail off.  Both come off easily.  The cell tube isn’t reversible – one end has unanodized threads (head) and the other has anodized threads (tail).  The anodized threads mean a physical lockout is possible by just a very short twist of the tailcap (but not the head!)  Also see that those threads are big and square cut, and very very smooth. 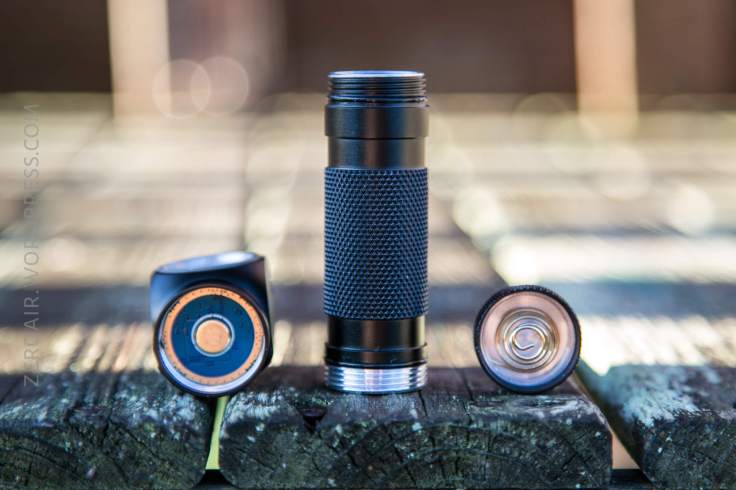 These parts are very high quality.  The tailcap has a big coated spring, which is springy enough, but not super stiff.  The head has a brass button, with no give at all.

The tube isn’t reversible.  Not only is one anodized and one not, but they’re different diameter as well. 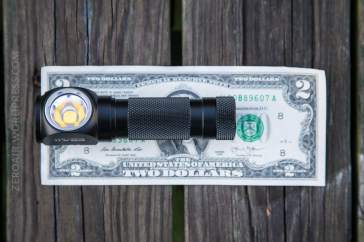 It’s shorter than the Convoy S2+.  Quite a bit shorter, and the head diameter is bigger (of course; it’s a headlamp).  Still, it’s shorter while adding charging….

The primary means to carry this light will be the headband.  I so rarely use a headlamp as a headlamp that unfortunately I failed to get any photos of the light in the strap.  The strap is a nice rubber (silicone?) band.  The light has smooth indentions which hold the light tight but still allow the light to rotate, too.

Secondly, the light can be used with a pocket clip.  The clip isn’t deep carry (at all) but will go on the head or tail end.

There is no magnet in the tailcap – probably the light is to heavy to use that way anyway.  It will talstand.

And it will headstand too, but the button is proud, so it doesn’t headstand well.

A single 18650 runs this headlamp.  The button on the positive end would cause no problems using any type of 18650 (button or flat).  Do be aware that Turbo requires a lot of the cell (6.5A, that is), so you need to use a high quality cell for this light.

Fortunately Thrunite includes a nice 3100mAh cell, very capable to run this light.  All the testing I did on this light was with the included cell.

Note that I’m measuring the output at over 3500 lumens at 30 seconds.  And still practically 1000 lumens after the stepdown!

The TH30 has on-board charging, too.  The head has a micro-USB port, which is covered by a rubber boot.  The boot is a little long and flexible for my tastes, but at the same time, does seem to stay very well put. 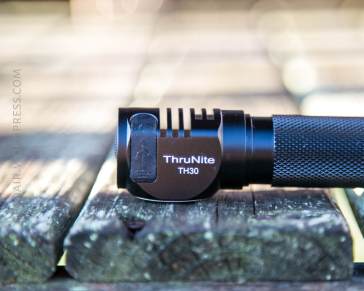 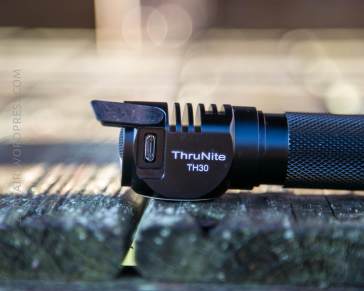 Charging works well, and the CC phase is 1.2A or over for the duration.  It’s also very consistent (note that there are two tests shown below, and they’re indistinguishably similar). 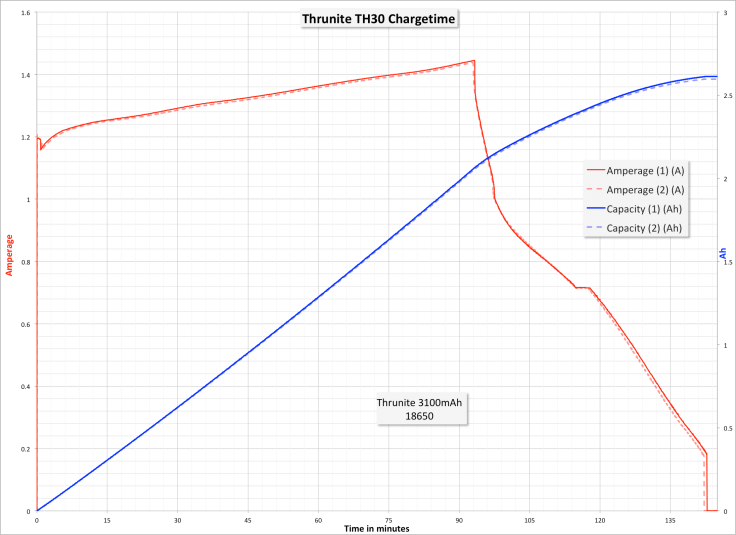 The indicator switch is red during charging, and blue when charging is complete.

The TH30 has a single switch on the head.  It’s an e-switch, with two indicating emitters; red and blue.  The switch is held in place by a bezel I couldn’t remove (not sure if it’s screwed in or press fit, but there are no reliefs, so it’s likely press fit) This might not seem like a big deal but have a look at it below.  It’s very smooth, and great for button-pressing-comfort.

The action on this button is a little odd for me.  The knurled dome has about 1-1.5mm of travel before the click of the actual switch.  It’s not a problem, and it works well. 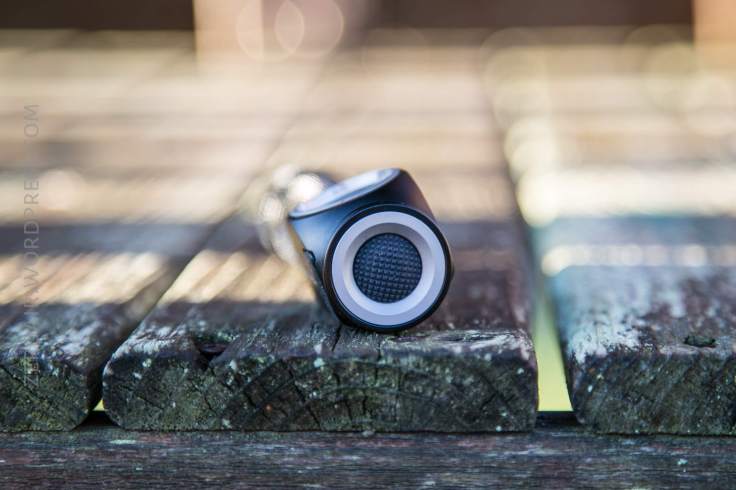 The blue indicating switch is on if the light is on, except on the lowest mode.

The UI is good, and well considered.  Shortcuts to the bookends from off, for example.  The downside is that SOS is in the main mode group.

There is no strobe!

The emitter in this TH30 is a Neutral White Cree XHP70.2.  The reflector is a fairly shallow orange peel reflector.  There’s a bit of an artifact in the beam – a donut most people call it.  It’s a blue spot in the center of the beam, with normal beam color everywhere else.  The 70.2 isn’t my favorite emitter, but this one’s a good example of a NW 70.2. 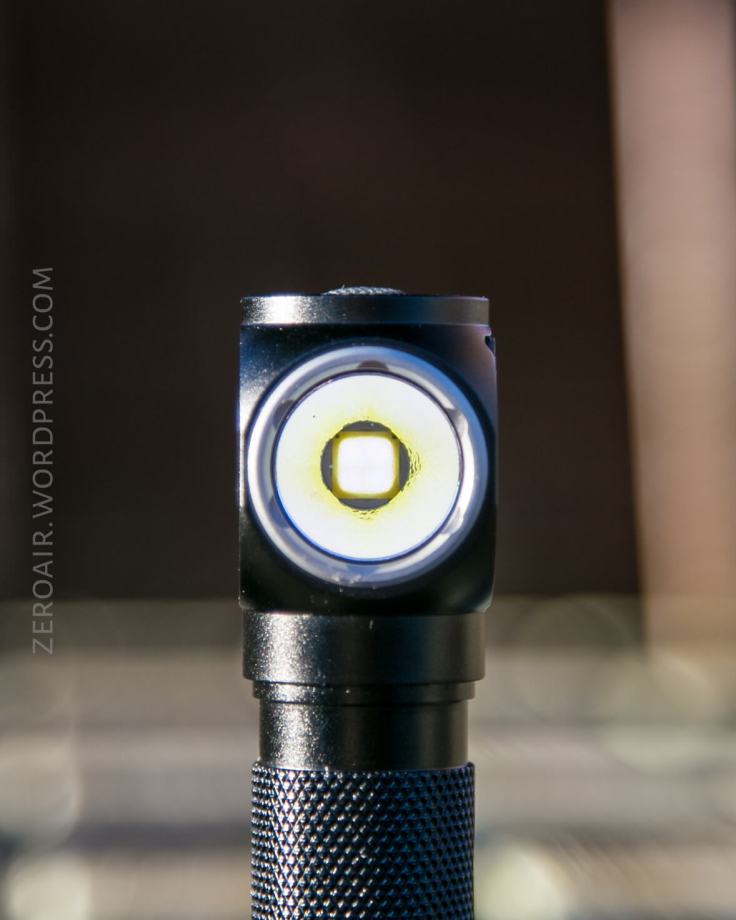 The only real competitor to this light is the Acebeam H15, which pumps out 2500 lumens.  It does have strobe, but doesn’t have on-board charging.

Otherwise, it’s going to be hard to find a headlamp that outputs more lumens than this one.

I hope to wrap up a Sofirn for Friday, but after that who knows!  Probably will take a week off!