This lantern came to my attention through many discussions about how great it was.  I wasn’t initially interested, but I asked GearBest to send one over.  Zanflare is the GearBest housebrand, and they obliged my request!  Here’s my review of this cool little lantern.

I didn’t really expect to like this light, if I’m completely honest.  As such, saying “I like it way more than I thought I would” is meaningless.  I really like this light.  It’s neat, clever, and works very well.  I think it could be improved, but it’s great as-is.

The box is not extraordinary.  There’s a nice illustration of the lantern, some specs, and a QR code, but the box is very thin and offers little padding.

(The box does say the 18650 is not included, but my package did include a cell. So…. [shrug?])  I do think all the packages will come with a cell.  (The manual does say it ships with a cell).

The plastic lantern cover of this light is very well diffused.  The built quality is good, too. 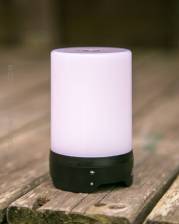 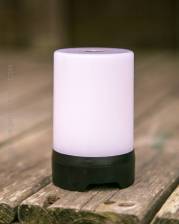 To me, the anodizing feels a bit thin – as you can see there are parts wearing away already from my fairly gentle use of this lantern.

This light has a proper tailcap, even though it is build up like a lantern, and big overall.  The tailcap has unanodized threads, and a tall spring.  Though it’s a bit recessed in the bottom of the lantern, it’s not hard to remove.  The reeding helps with that. 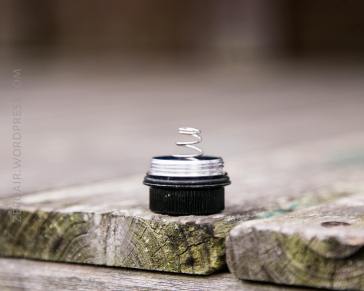 The included (and any) 18650 sits just about flush with the bottom of the lantern, so the tailcap has to be pressed fairly intently to get the threads to grab.  The threads are triangle cut, and could use a bit of lube.

There is a spring on the positive terminal (inside the body of the light) too. 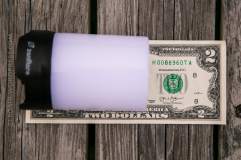 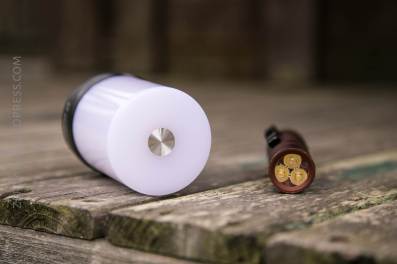 There are two means of retaining the T1.  First, is the magnet in the tailcap.  This magnet is quite strong, and has no problem holding up the T1.  It’s held in place by more than just the spring (as is often the case).  There’s an actual split ring holding the magnet.  The magnet is probably removable (ie not glued in) but you’ll have to remove that split ring.

The other option is a loop that flips out from the bottom.  (It can be seen below in the Power section).  The loop isn’t flappy, and stays in place, but it’s not hard to swivel.  There are no detents, so it rotates with even resistance all the way from side to side (I’d like at least one detent in the middle, maybe one at middle off-angles, too).  It’s a nice hook, and if you’re into weight savings or whatever, also easily removable.  It’s held in by tension.

Power to the T1 is provided by a single 18650 cell.  Any type cell will work, but unprotected, low drain cells are probably best.  (Protected/button top should work, but I believe getting the cap tight enough could be difficult, and possibly compromise waterproofness).  Anyway, the light has low voltage protection, so unprotected flat tops are fine (and that’s what’s included).

My normal logging setup doesn’t cooperate with 360 degree output lanterns like this.  So this is an uncalibrated partial runtime – partial because my logger shut down (I was accidentally on battery power instead of AC, woops).

But we can still glean useful info here.  The output drop over the course of an hour or so is minimal.  Also even though I can’t provide calibrated output measure, I can say it’s over ~65 lumens on high for both NW and CW. 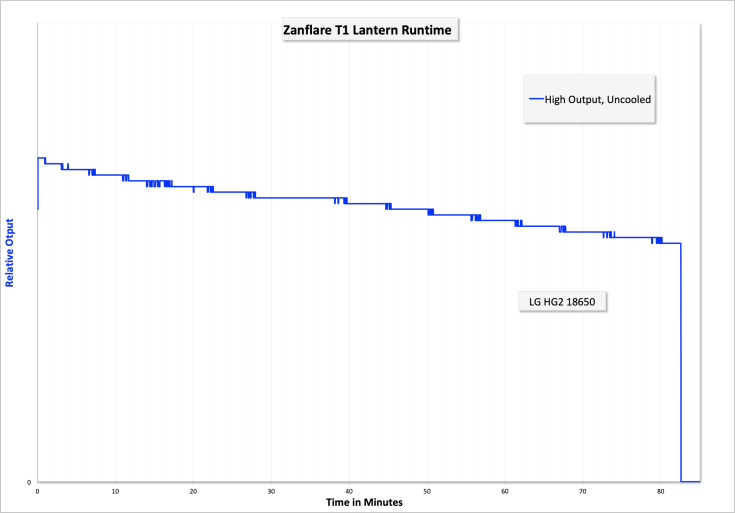 As I said, the light does have LVP, which kicks in at a cell voltage of around 3V.  Before that (at around 3.3-3.2V), the light starts attempting to warn the user that the cell is low.  It does this two ways.  First, the red side emitter which is used as a charge status indicator when charging, lights red.  Secondly, the main emitter (which ever mode you’re in) starts going wacky.  High output, low output, then just bouncing around all between those randomly.  It should get your attention.

A charge cable is included (USB to micro-USB). 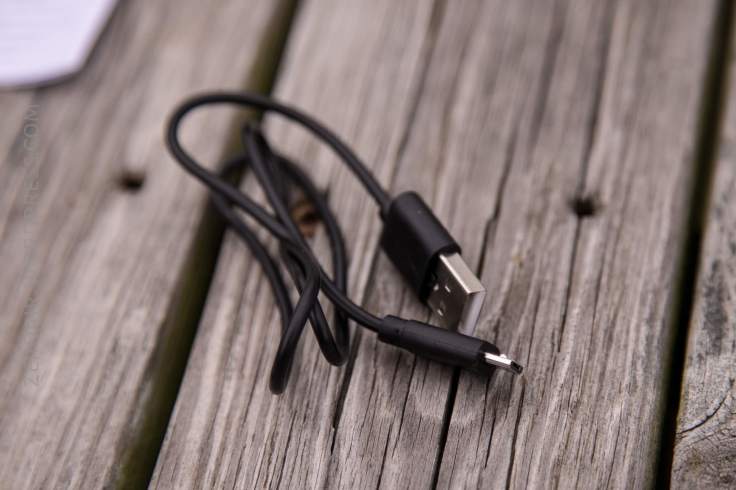 Charging is very capable, at exactly 1A.  I don’t think it’s unreasonable to consider using this as a charger for 18650 cells, because the charging is very good!  Now if only it had a USB out…. 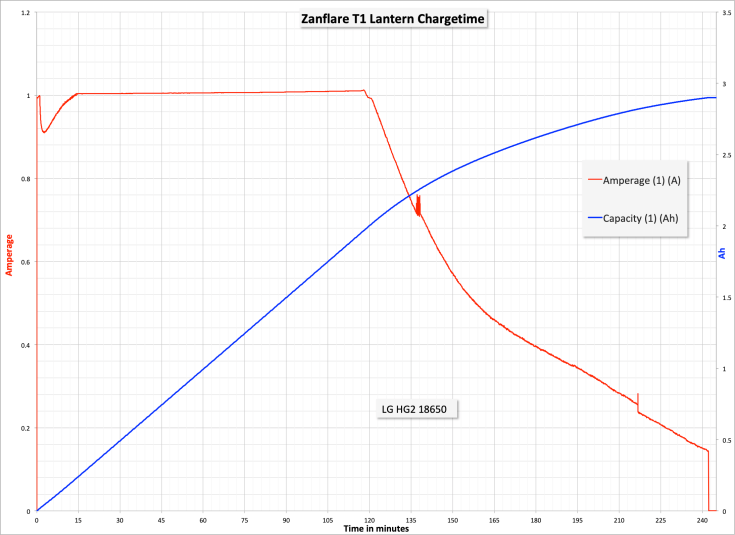 The charge port is covered by a little rubber boot.  It’s possibly not the most secure means, but it seems to get the job done.

There are two switches on the T1.  Mainly, there’s a tiny rubber e-switch on the bottom of the light.  It has the action of a reverse clicky.  I’ll call this the “Power switch” (though it’s not strictly speaking, just that).  It’s an absolutely silent switch, and directly opposite the charge port.  It’s a quite nice switch*. 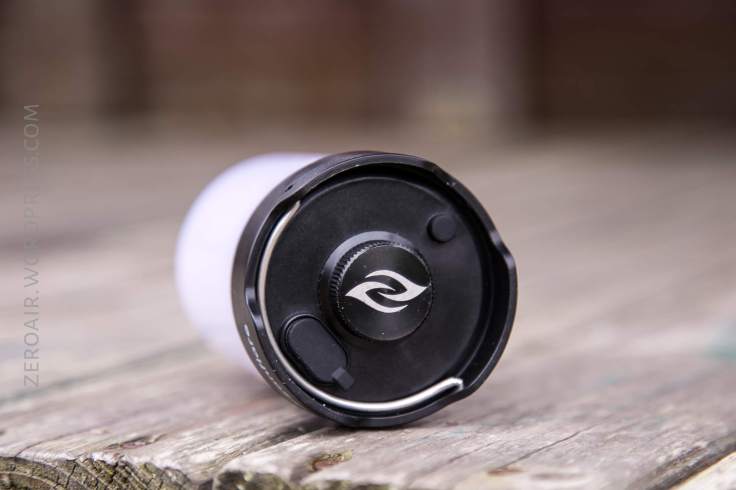 The other switch is on top of the lantern.  It’s a capacitive switch, and also works quite well (and is even quieter than the bottom switch! 😉 ).  I’ll call this the “Mode Switch” (though, like the power switch, it’s not just that.)

The beam is full, 360 degree output.  The emitters are not specified, but there are at least three types:  Cool White, Neutral White, and Red (and also a red indicating LED on the side).

Update! It *is* possible to adjust the temp of the NW mode! From off, double tap the top switch. Hold the top switch and the temperature will ramp up (then back down, if you reach the coolest and tap/hold again). Release at your desired temp, and tap again. This sets the temp into memory! 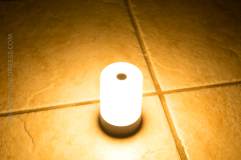 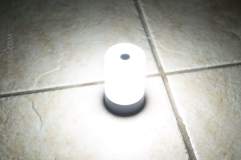 Hard to capture/compare the BLF-348 against the lantern.  But hope this helps. 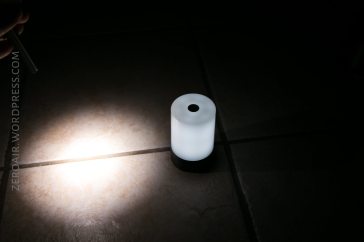 The other similar option are two lights made by Fenix.  They’re very similar and look like great lights.  They have more accessible switches, and charging, but lack tri-color emitter options.  They are also much more expensive!

Light and more lights!  I might work a charger into the mix!