XTAR makes some great products, and have a massive line of chargers.  Here are two new chargers, the D2 and D4.  Very similar chargers, except one’s a 2-bay, and one’s a 4-bay.  I think they could make great basic fast chargers, but I’m glad to test them to find out!

I don’t see these actually listed for sale anywhere yet, but I think the price for the D2 will be in the ~$12 range, and the D4 should be around $16.

These are very simple chargers, and seem reliable.  I like either them for single-bay use to charge at 2A, but once using them for multiple cells, the charge rate suffers a little.  I still like them for ease of use, though.

Simple and Fast, Made for Vapers

Both these lights come in standard XTAR blue and white packaging. 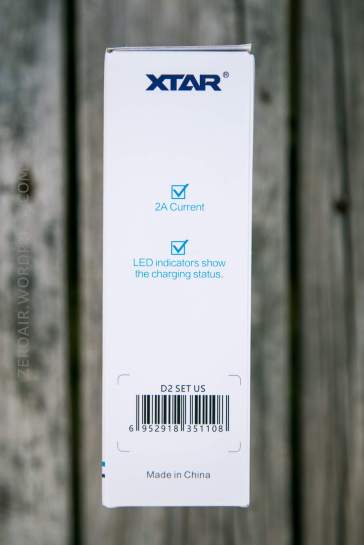 And sorry for murdering the white balance on these two shots below.  Please be prepared to forgive that mistake more times later in the review.  (I shot the products at different times.) 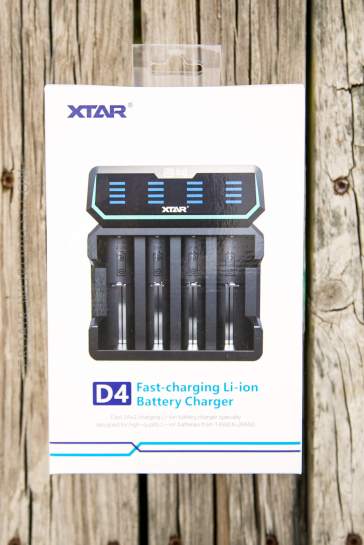 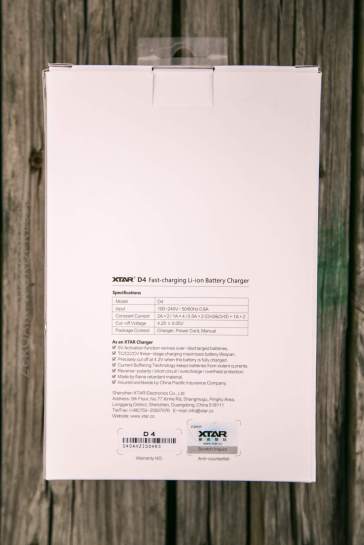 The parts are in a plastic tray, and travel well.

The manual is brief, but that’s no surprise; these are simple chargers. 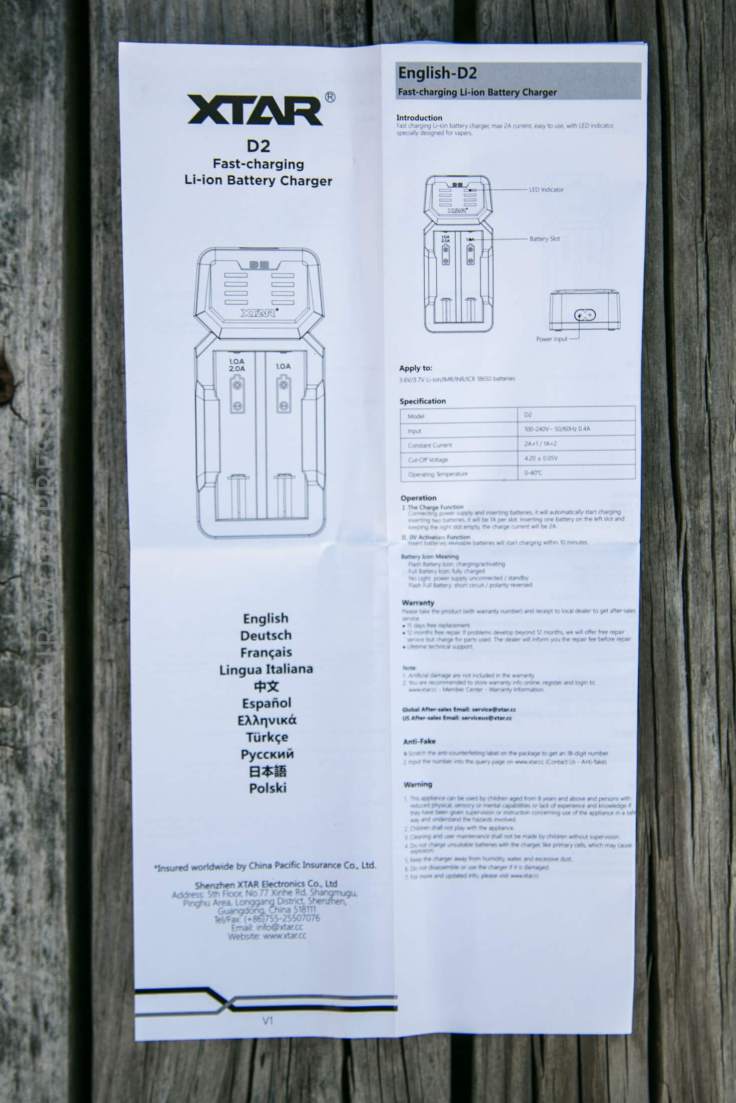 These XTAR chargers are, as I said above, simple chargers.  They don’t have a ton of adornment, and no buttons.  The XTAR logo and charge status bars are really just stickers over the LEDs.

In actuality, this sticker is the product of XTAR having more than one brand – this charger is also sold as the AllMaybe D2/D4.  Nothing wrong with that; badge engineering isn’t unusual.  And I think the AllMaybe is intended for a different market?  Not sure where XTAR is going with the brand yet.

The back has 6 Philips screws holding things together, and a cooling vent in the center.  And finally, a logo indicating what the chargers will charge (spoiler, no NiMH).

There are no ports for USB out or anything else on this device; only power in, which is on top.

Each bay is appropriately labeled with which currents it will charge.  On the D4, the outside two bays are bigger, accepting large cells like 26650s. 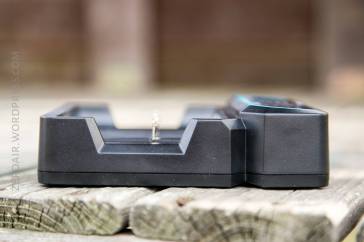 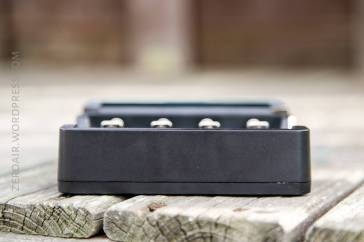 The bay also has a cell orientation indication just under the current possibilities.

The slides on both chargers are good, holding cells securely without being too difficult to operate. 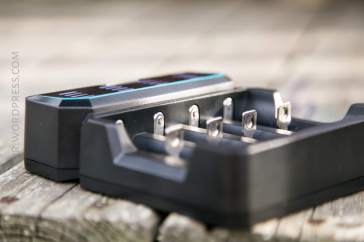 Here’s a bit of a teardown of each charger. 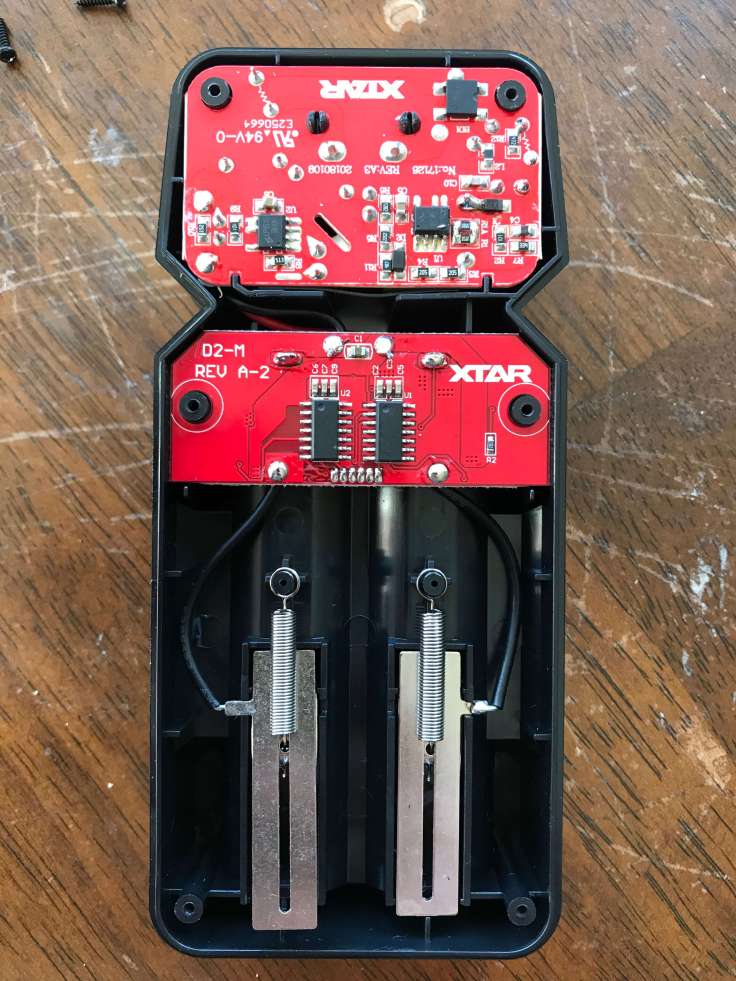 Here’s the rectifier side:

And the charger side of things:

This bit is unusual.  Since the bays are made specifically for 18650 cells, the metal part doesn’t have to be as long.  But common contact still must be made, so wires are soldered to the side. 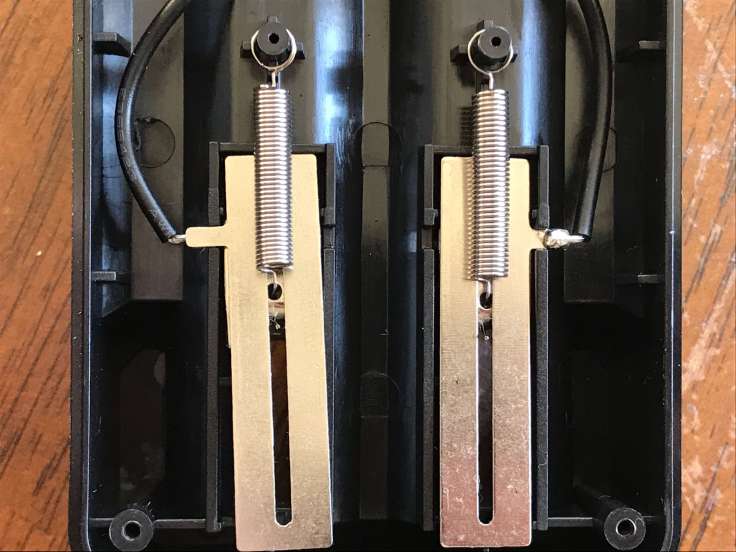 And here’s the teardown of the D4. 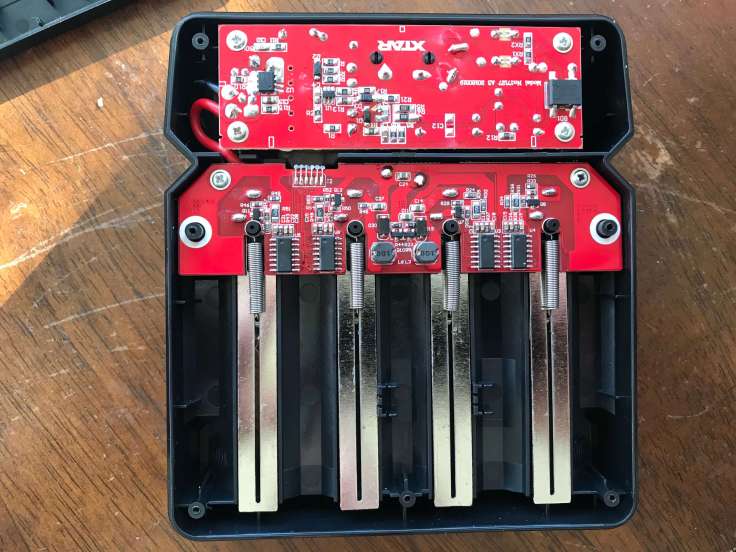 Rectifier side of the D4:

Below that’s the back of the board that has the indicating LEDs. 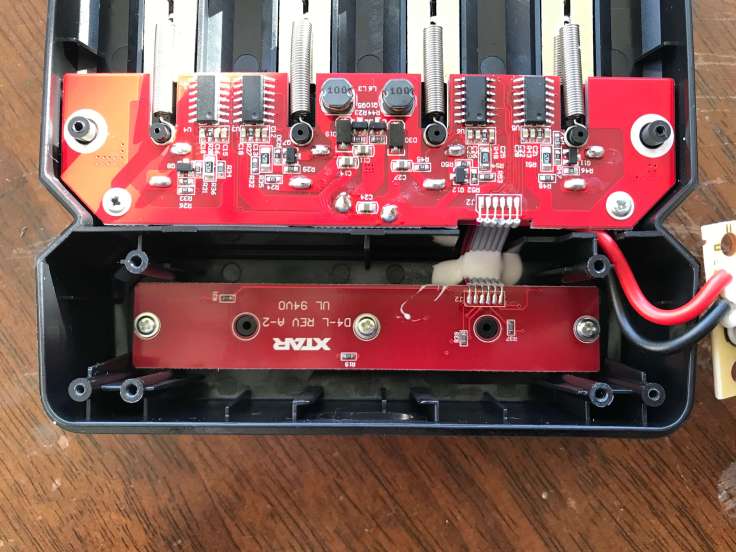 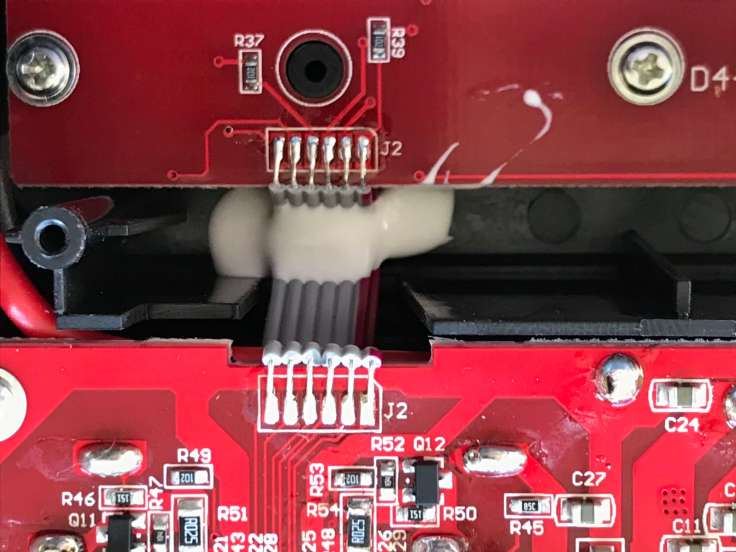 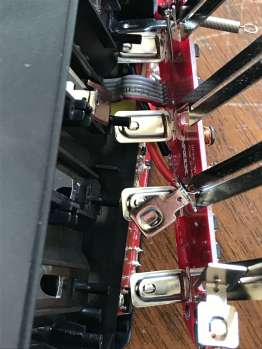 And finally, a nice touch on both of these chargers.  They don’t fit together arbitrarily (like some chargers do).  This lip on the bigger part lets the back sort of snap on, and fit very precisely. 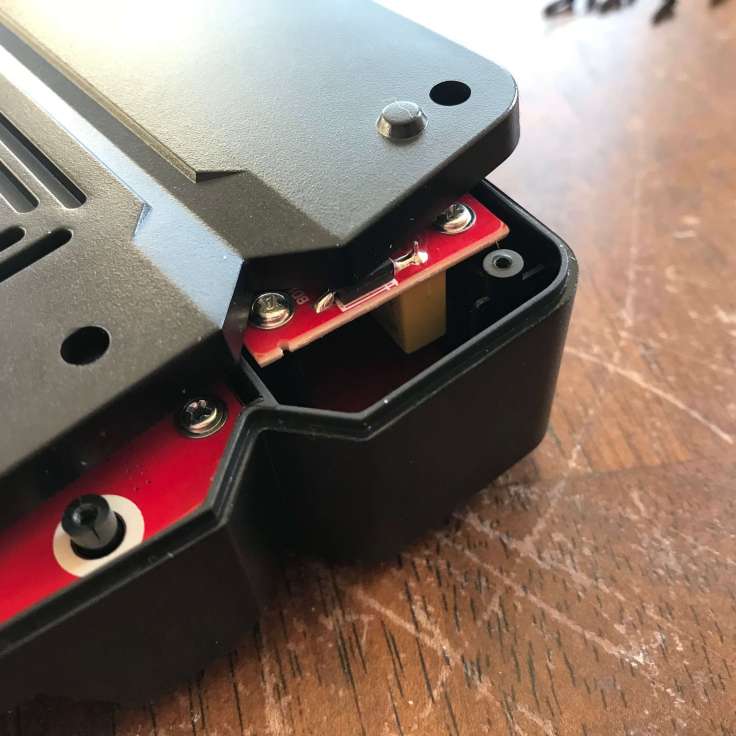 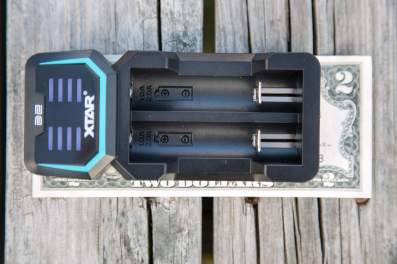 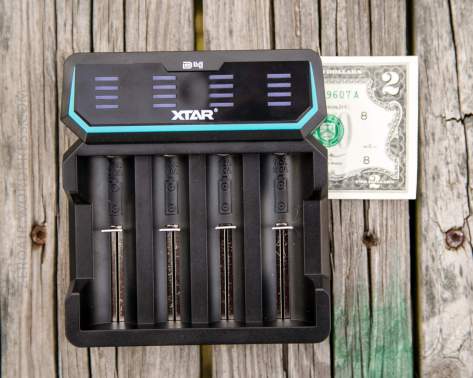 Neither is huge for it’s class.

Power is supplied to these chargers by a NEMA 1-15P to IEC-320-C7 (non polarized) cable.  Both have a cable included.  Part of the reason these chargers has a bigger ‘head’ is that they do the AC to DC conversion within the unit.  There’s no external power brick.  Part of the price paid for that is a max of 2A across 2 bays on the D2, and 4A across 4 bays on the D4.  A great step up would be to allow higher current for each bay.

The D2 can accept a single 26650, but nothing else along side.  It just barely fits, and not all that securely. 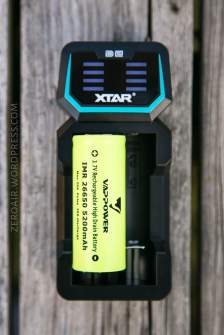 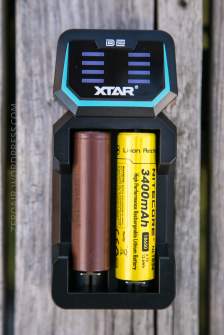 16340 and 18350 fit side by side, but the slides make this size cell unsupported – the slides don’t touch the negative poles of these short cells – nothing shorter than 18650s allowed.  Also nothing longer than 18650s, too. 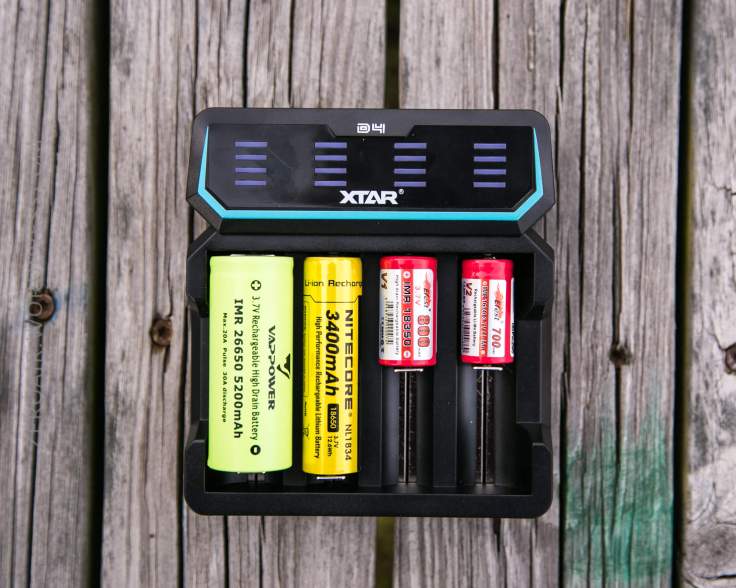 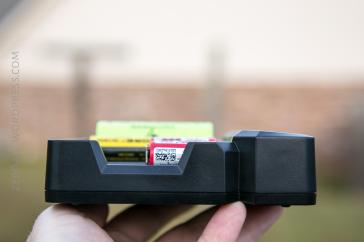 There is no user interface at all.  Just pop the cell into a bay, and charging will start within a few seconds.  Depending on what bay and how many cells there are, charging will commence at 2A, 1A, or 0.5A (on the D4).

Below are a couple of charge graphs, representing charge of a LG HG2 as the only cell in either charger, and coupled with another needing-charge cell.  Both these chargers charge at 2A (or near it) when charging a single cell.  The D2 performs better when there are two cells installed (charging at 1A in each bay, as prescribed).  (Disregard the “Capacity” on this graph; I think I have a scaling issue wrong here.)

When the D4 has two cells, they may be at more than one current.  The middle two bays have a possibility of 1A and 0.5A.  In the graph below, the “2 Bays in Use” graph is with bay 1 and 3 occupied.  And bay 3 is being logged, so as we expect, the current is around 0.5A (a little higher, in fact).  This is expected, and charging the other depleted cell in bay 1, which should be at 2A, explains why bay 3 isn’t exactly 0.5A – it’s somewhere between 0.5 and 1A.  So it’s probably more reasonable to say that the bays of the D4 can be used in such a way to get multiple currents – not that it really matters in the end.  (Disregard the “Capacity” on this graph; I think I have a scaling issue wrong here.)

The D4 is capable of charging Li-ion sizes all the way down to 14500.  Probably due to the lower minimum current (than the D2) of 0.5A.  The D2 is intended strictly for 18650 cells, which is again reasonable, since charging is only two currents: 2A and 1A.  These currents could be too high for smaller cells.

The chargers do some other things automatically, too.  If a 0V cell is installed that can be recovered (ie protection is tripped), the chargers can recover the cell.  XTAR also promotes a kind of a “soft start” for charging that they say will help cell life.  First I’ve heard of this kind of technology, so you can make of it what you like.  XTAR also mentions TC/CC/CV charging.  CC/CV should be familiar, but it’s unclear what the first stage (TC) means.  I expect this too relates to the soft start of charging.

If I can get some runtimes complete, I’ll be posting the Wuben E05 on Friday.  That’s yet to be seen, though!  Stay tuned!