Going small is the big thing in 16340 lights lately, and Fenix has entered the game.  The Fenix E16 is a tiny light – definitely the smallest 16340 light I’ve handled (and I’d guess the very smallest on the market).  I’ve been using this one for a while, so read on for my thoughts!

There’s just one version of this light for now.

The E16 lists at $40, but I’m fairly sure there’s already been a sale on it.  The official site says that the first two waves have sold out.

This incredibly small light has a very warm tint, and an optic that makes even the lower modes throw quite well.  The build quality is very good, but the output on turbo is very dependent on the quality of cell used.  And Fenix doesn’t include a cell, so it’s up to you to get a good one.

The light ships in a display-read flip-open (with window) package, which includes product photos and a few specs. 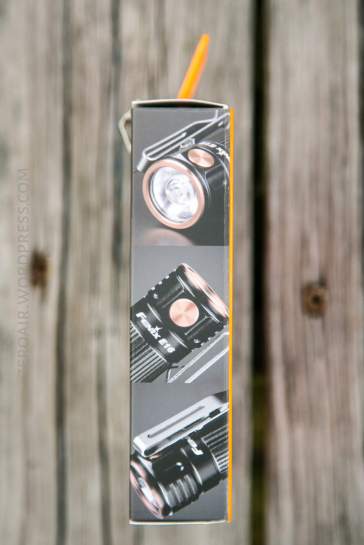 The inside flap has a nice spec table.

Here’s a PDF manual.  It’s a good manual – even including a runtime chart for each mode.

The clear emphasis of this light is to be diminutive.  It is quite small.  It seems like the walls are probably thinner than on many larger lights.

The anodizing is fine.  The type of knurling makes the anodizing feel a little thin, but there have been no issues with this.

I can’t overemphasize how tiny this light is! 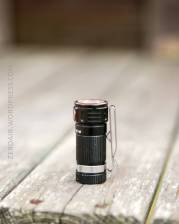 The tail end of the light has a removable spring.  This holds in a magnet, which should be removable…. if you can manipulate the spring out.  That could be difficult, as the cell tube and tail end are one piece, so you’ll need to navigate down the dell tube to the tailcap to remove the spring.

The head has a brass button (no spring), and a plastic ring.  This plastic ring is the only place that the cell orientation is noted.  (Positive toward head).  The bezel is press fit, and about as removable as the bezel of other lights in this class (read: not very). 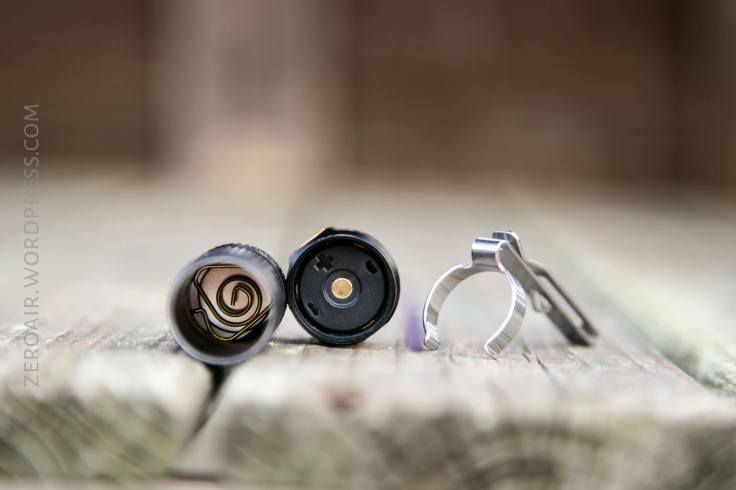 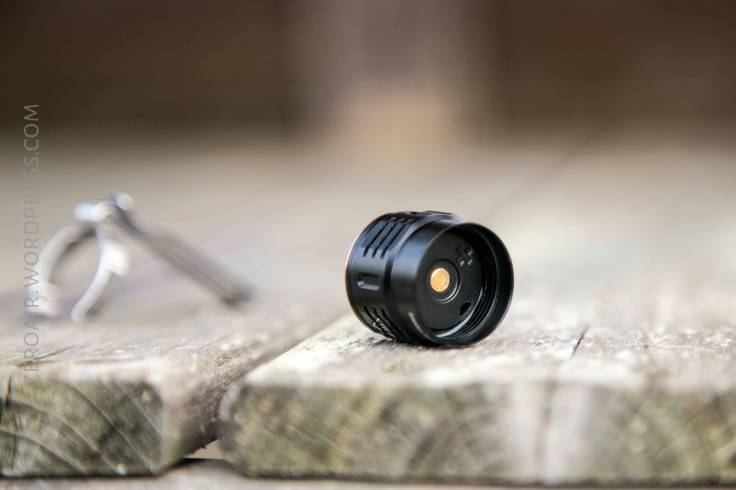 The threads are square cut but still fairly fine.  Very nice threads.  They have no lube at all, and are fully anodized.  That makes physical lockout possible. 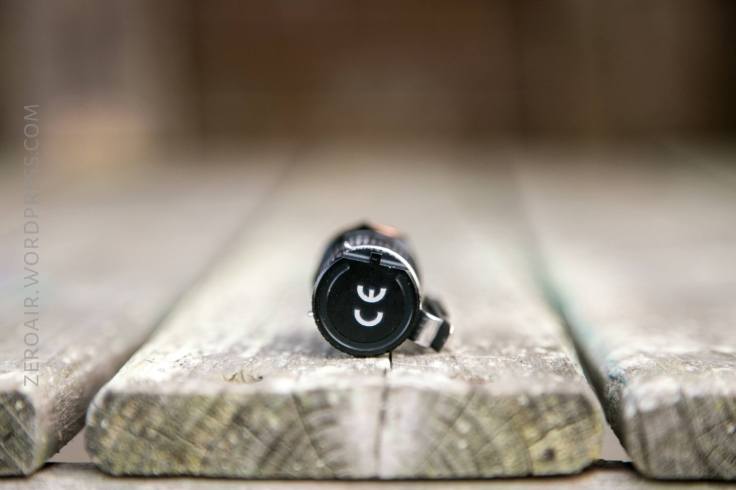 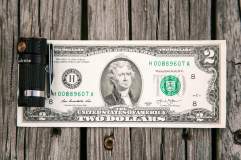 Two of these together are still shorter than one Convoy S2+!! 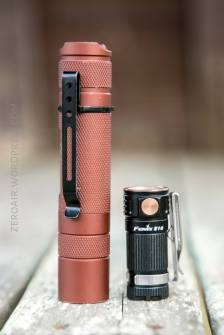 The first and foremost means to carry this light is the bi-directional pocket clip.  The friction clip can only attach on the tail end.

The clip has the little bump out on the light-side, which should help hold the light in place on a pocket.  I don’t find this to matter all that much, but unlike other lights with this bump, this one doesn’t actually prevent good usability.  The bump does do another unusual thing, too.  With the clip rotated to just over the switch, that little bump prevents the clip from clicking the switch.  As such, the pocket clip can be used as a sort of click-prevention. 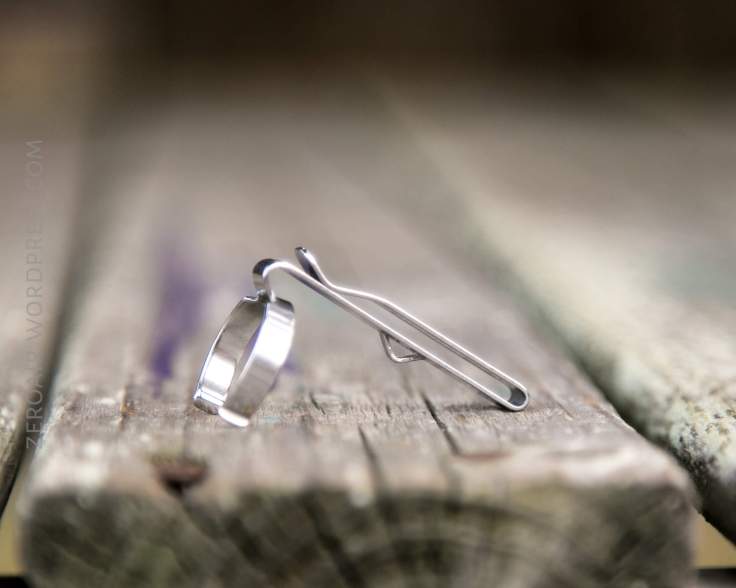 There’s also a hole in the tailcap through which the lanyard may be attached.  I would not consider the pocket clip a reasonable place to attach a lanyard (the clip isn’t attached that firmly.)

The pocket clip can be removed, and you might find that desirable.  The reason for that is:  the head is difficult to remove with the clip in the way.

Finally there’s a magnet in the tailcap, which works well for this light light. 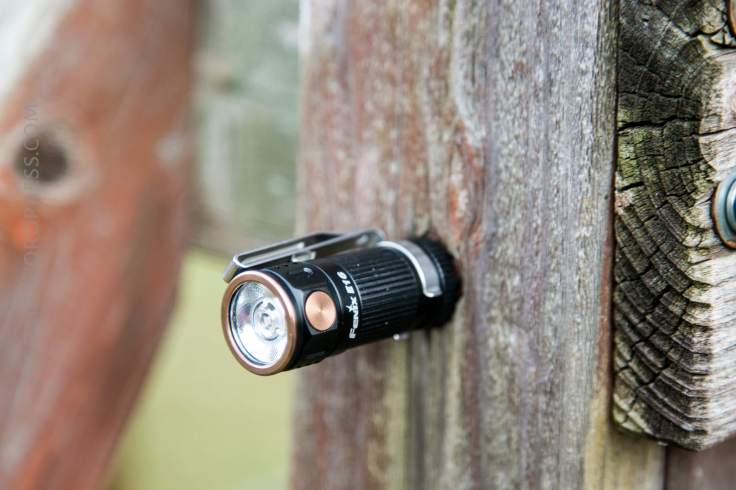 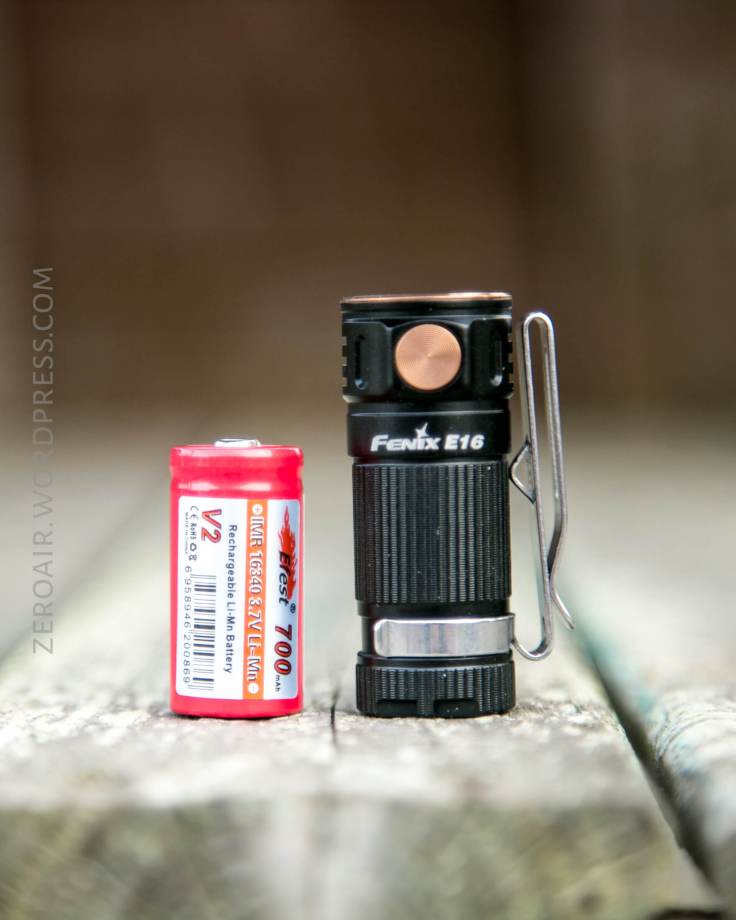 A couple of things.  First, the magnet in the tailcap actually holds the cell in the body well enough that you’ll probably have to shake the cell out.  No big deal.

Also, the head has a marking of “+” for help with cell orientation.  The cell is oriented in the “normal” way (positive toward LED) but it’s worth mentioning to pay attention here, since other small lights like this aren’t the normal way.  A few of the smaller Olight like the S Mini and S1 Mini have the negative end of the cell toward the LED.  So pay attention, particularly if you normally use Olights.

And finally, because of this positive indicating ring, the cell must be a button top.

Here’s a runtime on Turbo.  Turbo lasts a very brief time.  Not even 15 seconds.  However, in my tests using the bench power, turbo would run much longer.  So with good power, Turbo doesn’t seem timed, doesn’t flicker, and is quite good.  As such, I recommending buying the highest quality cell you can find with this light.  I don’t know that the Efest is that cell….

It’s possible to reset the light to turbo, but still, it’s a very brief Turbo.  On the bench power, the light didn’t seem to have any LVP, but with an actual cell in use, the light switches to such a low output that it’s impossible to not notice.  The stepdowns are approximately equivalent to the next lower mode.  Turbo steps to High, High steps to Med etc.  Nothing wrong with that. 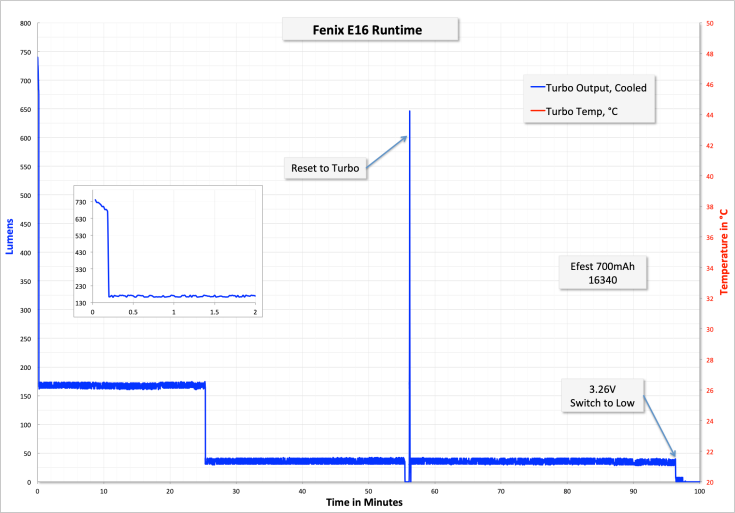 A runtime on High looks very similar to Turbo (minus the very brief Turbo).  The output is incredibly flat and stable until the stepdowns.

The switch is an e-switch on the head, and has a metal cover.  It’s not an indicating switch, nor are there any indicating features anywhere else.  The switch is very close to the bezel, and flush with the body, though the body does rise around the switch.  It’s not the hardest switch to blind find, but it still required some concentration on my part.  That said, I still like it, because I just really like metal clickies.  This one has a spiral texture, and is positively clicky, but not the least bit loud. 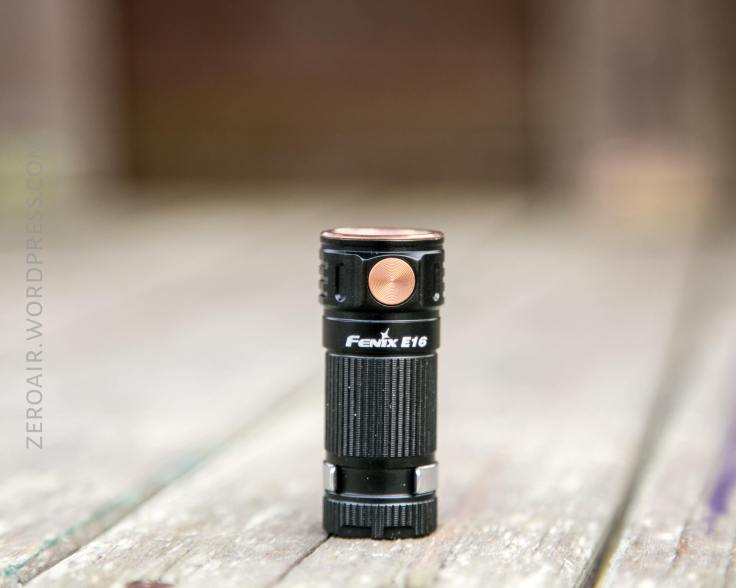 The UI has caught some noise, and I get that.  There are some actions that do unusual things, which will probably take some getting used to.  Here’s a UI table!

It’s the double click for lockout that will get most users (me included).  Also there’s no shortcut to any mode (unfortunate!!)

The emitter in the E16 is a Cree XP-L HI, and honestly the warmest XP-L HI I’ve ever seen.  Fenix calls it “Neutral White” but it’s at the very least warm.  I happen to like warm, although I don’t reach for it as my main tint.  So I like the tint of this light, but it absolutely won’t be for everyone.

Have a look at the optic, too.  I haven’t seen one like this – I don’t know if it’s one Fenix had designed for this light, so it can be extra shallow, or if it’s a stock TIR, but it does provide a fine beam profile, and one you’d likely not expect; it’s very spotty, but not in a typical TIR way – the output isn’t flat across the hotspot, it rolls off just like a reflector light.

One thing about this being such a hotspot light:  Even the low modes seem like they put out a lot of light.  It’s not that the low isn’t low enough, it’s that the beam

Just a random thing:  I like very warm tints in brass lights.  So a brass version of this light would be an absolute insta-buy for me.  The NW brass Olight S Mini is probably my most used light over the last year for this very reason!  And I like the metal switch on this one much more than the rubber of the Olights….  Suffice to say, special metal versions of this light could be great!! 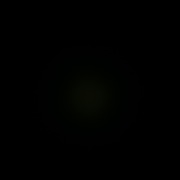 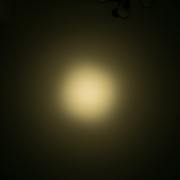 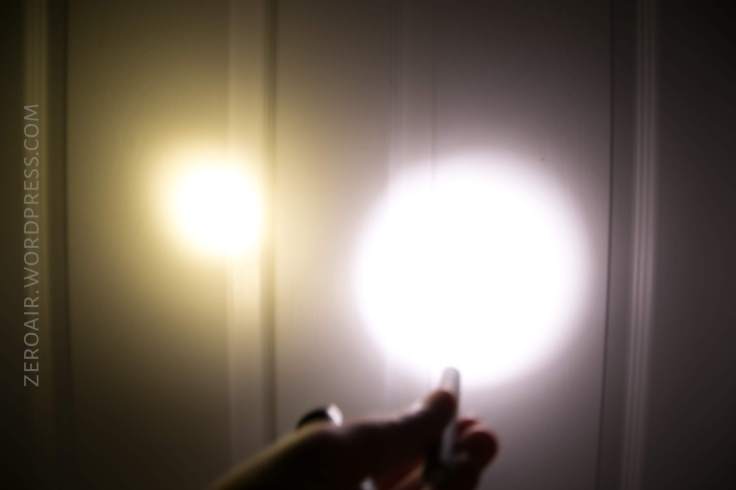 Surprisingly there aren’t all that many XP-L HI 16340 lights!  Fenix makes a couple of them.  But you’d likely be interested in this one because it’s so small, and in that regard, yes, it’s so very very small!

Up next is Fun Fund Friday!!