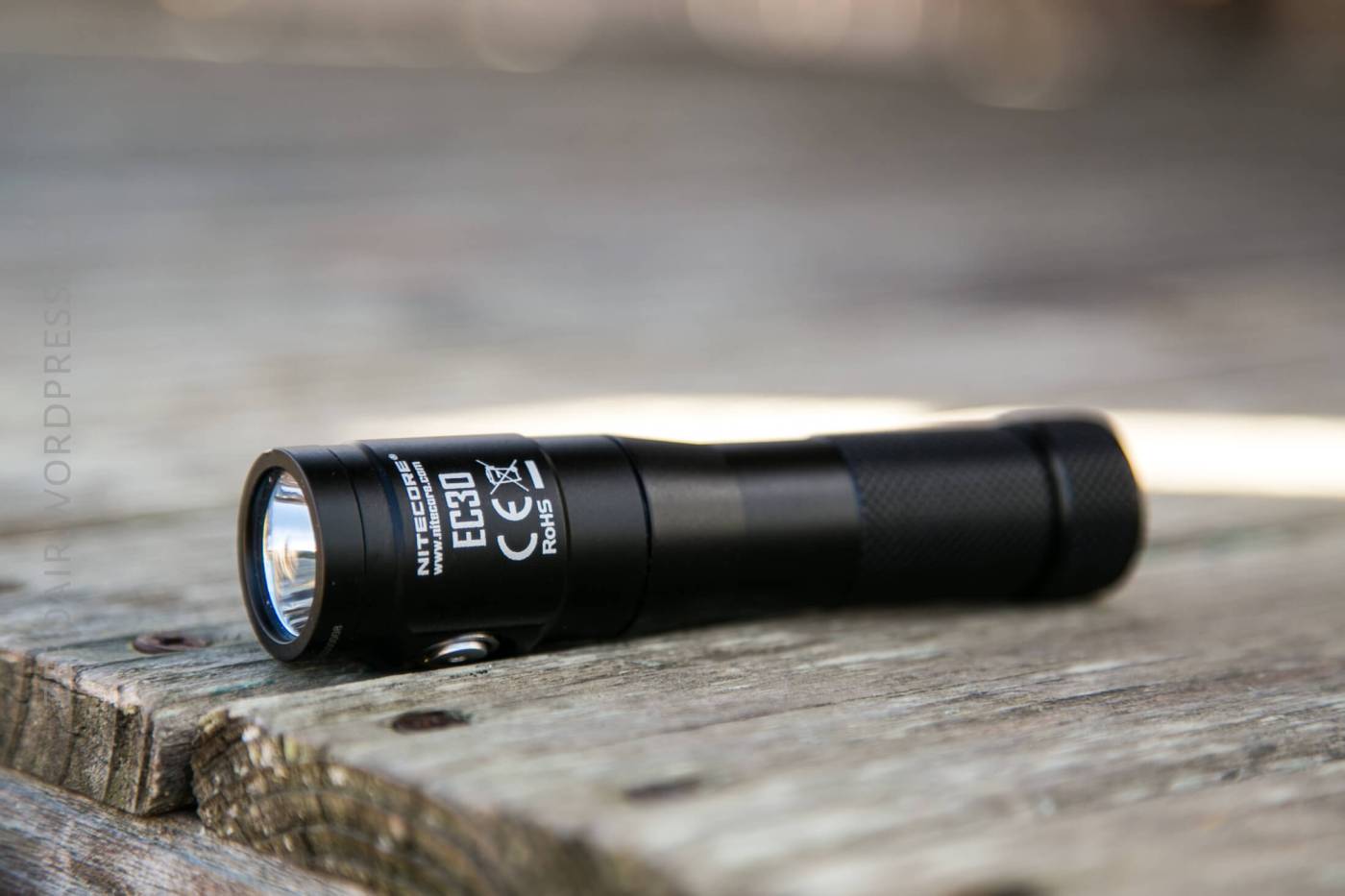 In for review today is the Nitecore EC30.  This builds on the Concept 1 platform, with a different switch.  But what else is different?  Read on!

I like the build of this light, and it looks fairly “flashlighty” (which I do like!).  But the UI is practically a showstopper for me; I could not get used to it.  Output is great, though.

I didn’t get a full retail package for the EC30, so what I have included is not the full package.  But what I got:

I didn’t get a package, but I have no reason to think it won’t be typical Nitecore style packaging.

Fortunately the manual is available as a pdf here.  Go ahead and download that; you’ll likely need it for the UI section.

The build quality of the EC30 is very nice.  The light overall feels quite good in-hand.  I like the knurling – it’s a diamond pattern but not too grippy. “Flat grippy” basically.

The model name and some other things are silk screened on the head in a very Armytek way. 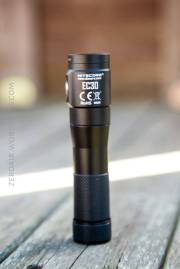 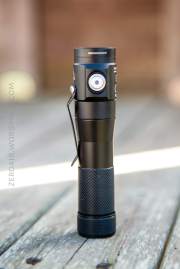 The head has a brass button, and a plastic surround which indicates this is the positive connection.  This brass button has no give – during my testing, this button gave one of my favorite cells a bit of a dent in the positive terminal.  Not sure why, though, as there’s plenty of room for an unprotected cell in there.

The tailcap has a beefy spring, and a magnet. 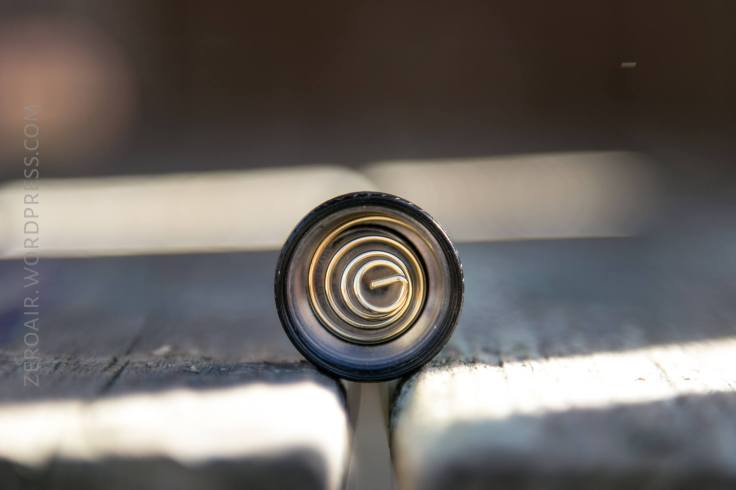 Here’s a close up of that silk screen printing on the head.  There’s a lot there. 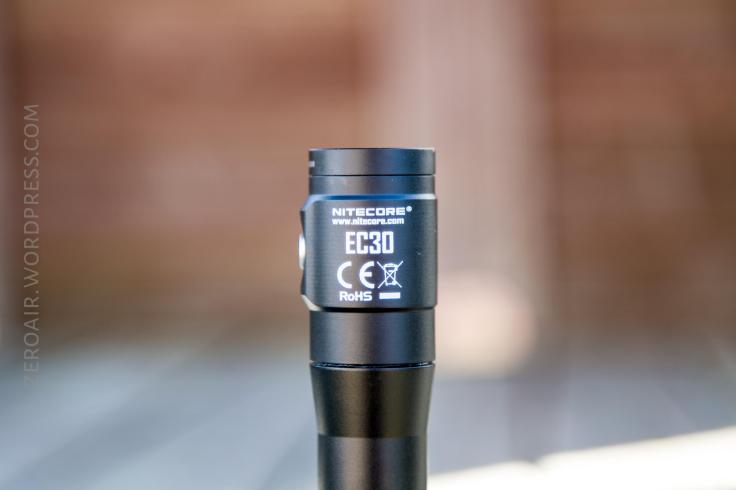 I’m very happy with the knurling on this light.  Easily my favorite type and this version is done perfectly.  Just grippy enough but doesn’t bother anything like grabbing skin or pockets.

The threads on the tailcap are fine but square cut, making for a very pleasant threading experience. 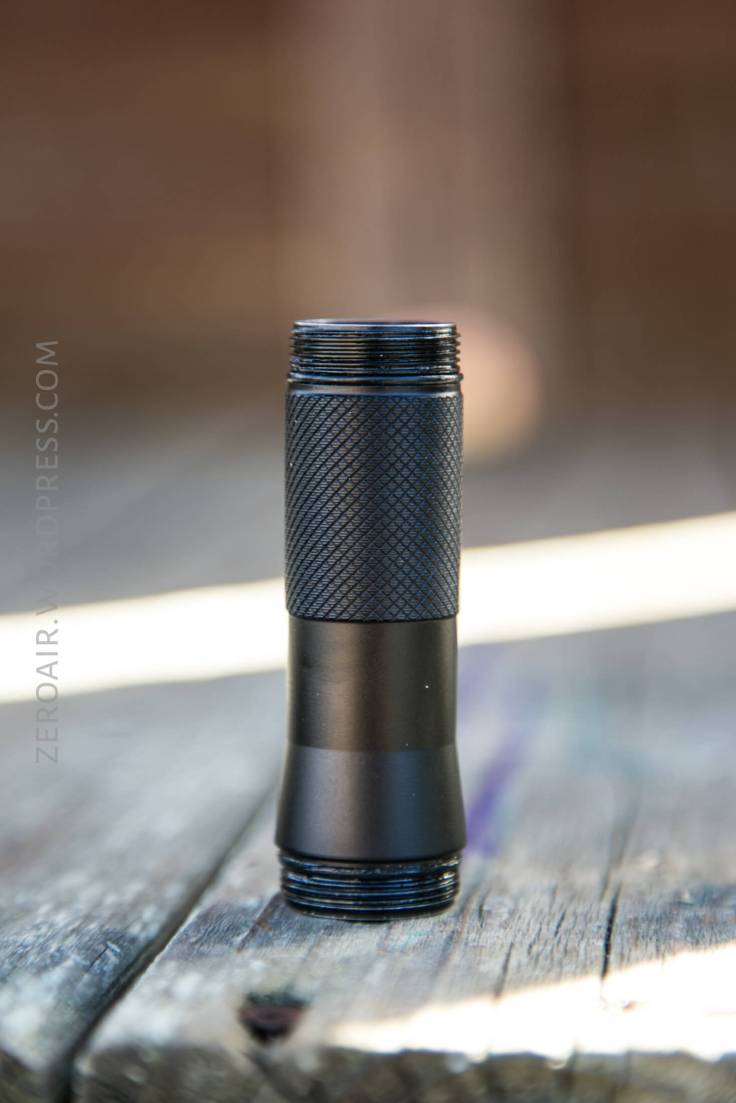 The cell tube is not reversible, nor would you think it is – the head end is flared. 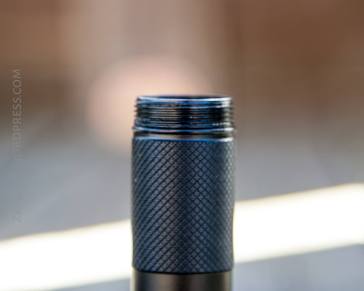 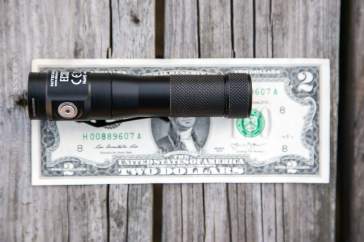 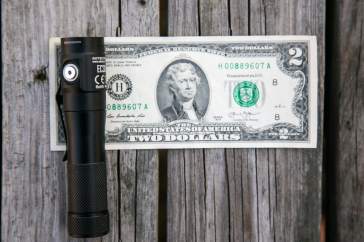 Shorter than the Convoy S2+, but the head is a little bigger. 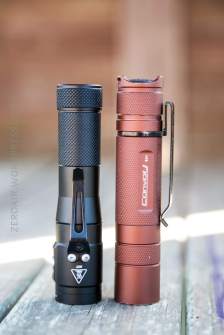 Shorter than the BOSS, too!

I don’t know what else might come in the retail package (probably nothing!) but what I got was an already-installed pocket clip, seen below, a lanyard, and the magnet in the tailcap.

The pocket clip doesn’t allow me to carry the light as deep as I really want to, and only allows for bezel-up carry.  Even though the clip orients the button to the side, I still had one accidental activation, and didn’t realize it til my favorite jacket had a nice big melty spot on it.  😦 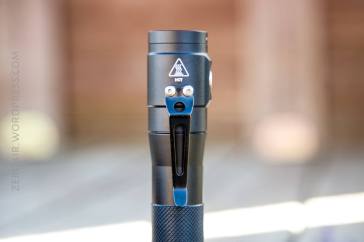 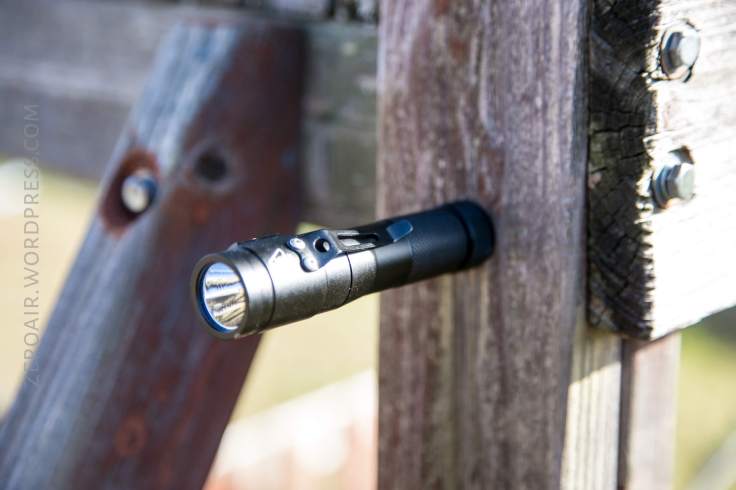 The EC30 is powered by a single 18650 cell (and can also run on 2 × CR123).  I tested the light with a GA cell.  I’ll note that in one instance the EC30 dented my favorite cell!  The cell is still fine, but be aware of this when tightening the cap.  (That said, I don’t know how you’d really avoid this by leaving the cap unscrewed – I did drop the light, which is probably what caused the issue).

Here’s a runtime on Turbo.  The output drifts down from Turbo (which is over the rated 1800 lumens at 30s), and steps to approximately the modes with each step.  The light switches to low, but never actually shut off in my tests with a cell. 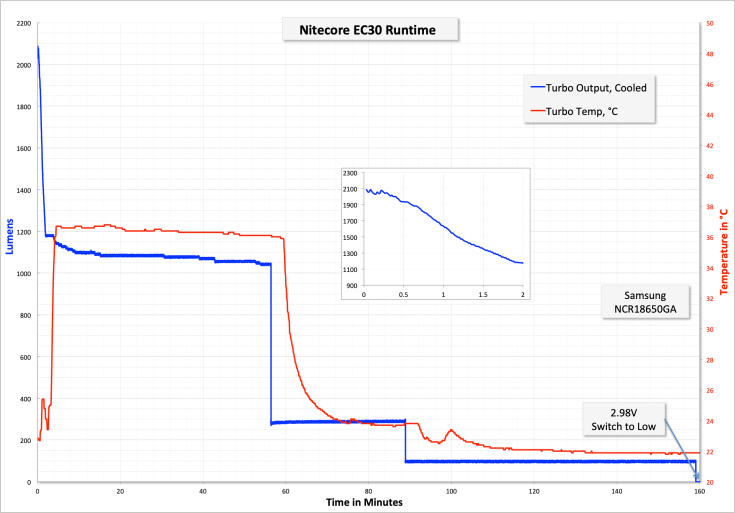 Here’a runtime on high.  Looks about like Turbo, and is fairly well flat for the duration of the High output.

Using bench power, there seems to be LVP at 2.8V.  No switch warning, but light completely (and electrically) off.

There’s a single switch, which is a side electronic switch, with an indicating LED right in the center.  I like the switch just fine – it’s clicky, metal (ish?) and has the indicator.

The bad side of this side switch is coupled with the fact that this light has no electronic lockout.  The switch is proud, and very easy to activate.  I resorted to doing the recommended action of 1/4 turn on the tailcap for a physical lockout (something I hate doing).  I said the same thing about the Concept 1 – the switch is too easy to activate.

Notes about the UI:

This UI is the same as the Nitecore Concept 1.  I … didn’t love it then and can still say this about it:

It is my opinion that this UI is very purposeful.  I’m not sure for whom it’s designed but I think the UI would be great for someone who wants a one mode light.  Because once the light is set to any particular mode, it’s as simple as long clicking to always get that mode.  Yes, there are caveats (ie turbo is easy to hit), but it’s still a viable use for this UI.

I can say that it’s taken me a long time to get accustomed to the UI on this light.  I don’t dislike it strictly speaking, but it’s been a challenge.

I can actually say now that I don’t like this UI.  I believe it was designed for someone who may not use flashlights all that much – ie a “beginner UI.”  I handed this light to a beginner and they could absolutely not figure out how to use it.

Again, same emitter as the Concept 1.

There’s a single Cree XHP35 HD in this light, behind a smooth average depth reflector.  This makes a “throwy” beam (though I wouldn’t describe this light as a thrower).  What I mean is that the light has a tight concentration, but is not a pencil thin throwy beam.  So there’s a distinct spot, with a secondary spot of maybe 1/3 intensity, then little spill.

I’ll add that there’s a very clear yellow spot in the very center of the beam, visible on all modes but low.

With the smooth reflector, size and shape of this light, and availability of the emitter, I’d probably rather see the HI version in this light.  Or maybe just an option on the emitter; that’d be good.

I have no issue with the tint, though it’s not my preferred “rosy” and has, as mentioned, the yellow spot in the center. 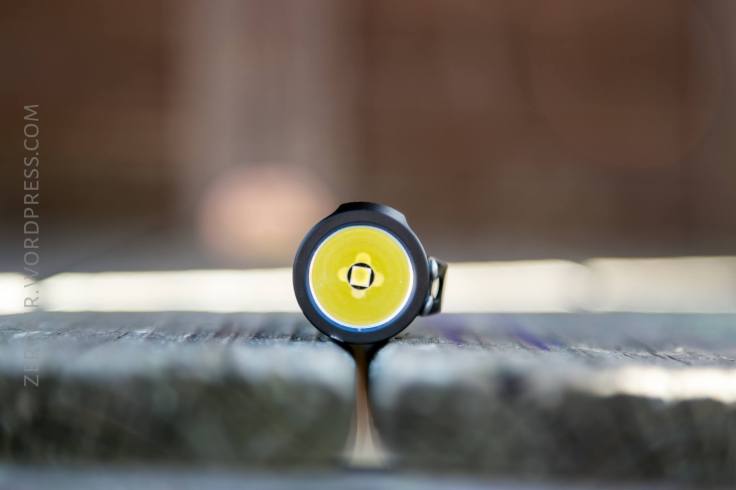 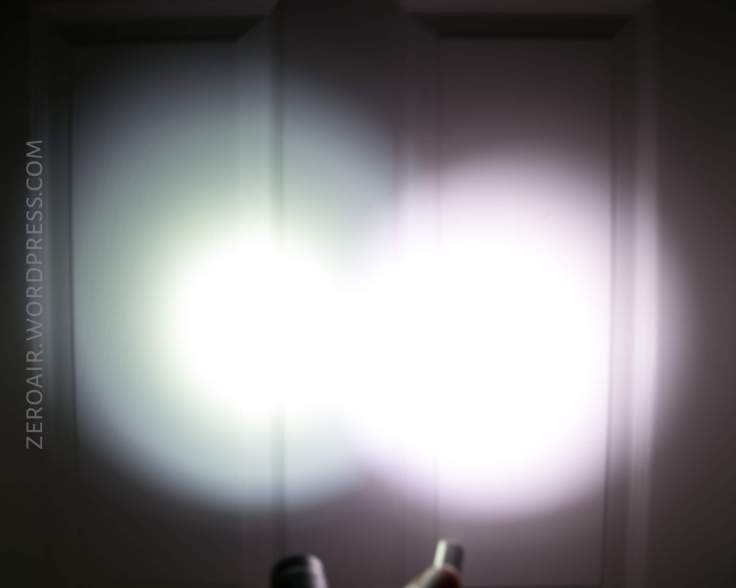 I have cells to review, and chargers, and lights, but as we approach the holiday season, I may slow down a bit?  Who knows.  Look for a Thrunite review next week!