I knew I wanted to have this Concept 1 right when I saw it.  For whatever reason (not necessarily any logical reason) it reminds me of the HDS lights, and some old Novatacs and other lights I’m a bit nostalgic about.  It’s the tapered body…. Anyway, after talking to Nitecore Store, they sent one over when they were released.  I’m happy to have one and also glad to tell you my experience with it.

You can have any color and emitter with this light that you want!  So long as it’s black, and Cree XHP35 HD.

I was prepped to like this light.  And aside from a few niggles, I do like it.  I look forward to a revision, with this as a great start.

Here’s a full album, some beamshots, and a runtime.

Nitecore still uses their familiar black and yellow, but in a much more subdued way with the Concept 1.  There’s also much less printing on the box. The box has a hang tag, so it’s display-ready, too.

The manual isn’t anything unusual, however.  That’s good; Nitecore’s manuals are usually well written and comprehensive.  The Concept 1 manual is, too.  It includes everything you need to use this light fully and safely. 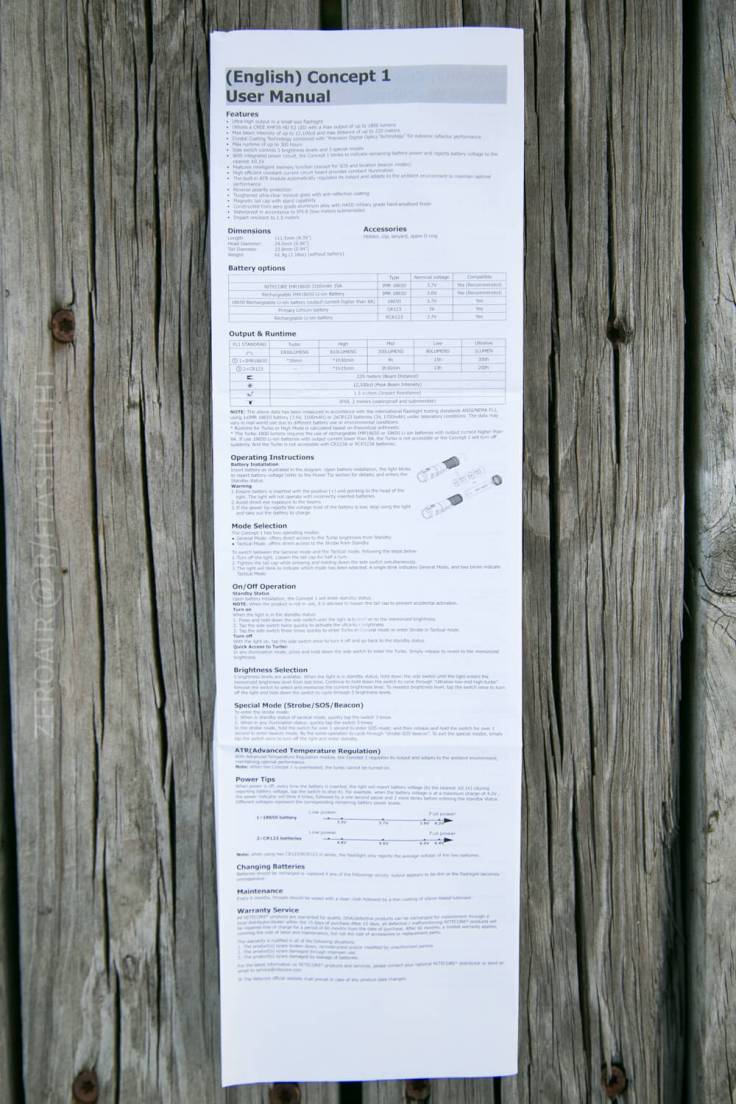 The Concept 1 has the usual level of Nitecore quality.  Nothing about this light gives me any concerns; it’s all quite well built.  A few things that stand out to me:  The knurling is diamond patter, but also has ‘shaved’ point (sorry, I don’t know how best to describe this) – this makes a very soft knurling pattern that isn’t too grippy and doesn’t tear pants pockets and the like.  It does provide grip. Practically, just the right amount of grip.  Secondly, I like that the body tube is it’s own piece – easily removable by unscrewing. (Maybe this opens the possibility of a 18350 tube down the road?).  I like that the taper in the body means the tube is clearly and necessarily directional.

Just look at that great knurling! I’m glad it stops where it stops, based on how the clip attaches (essentially permanently).  If the knurling was higher then it’d scrub the clip when the body tube was screwed back on to the head.

There’s just one spring and it’s on the tailcap, with a magnet under it.  The spring is very beefy.  The head has only a brass button, but it’s proud which means this light will accept any type cell.

I honestly could not remove the bezel on this light.  By the look of it, it should just unscrew.  It almost looks like the switch is a compression lever or something to hold it down, but it’s not.  Anyway, I was not able to unscrew the bezel.

The threads on both head and tail of the body are anodized and very slightly square cut but also very small threads.  I didn’t have any trouble or concern about cross threading, so even though they’re thin, they’re fine threads. 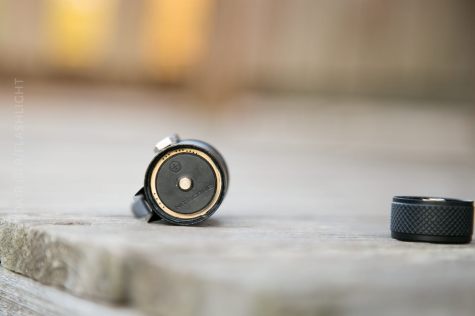 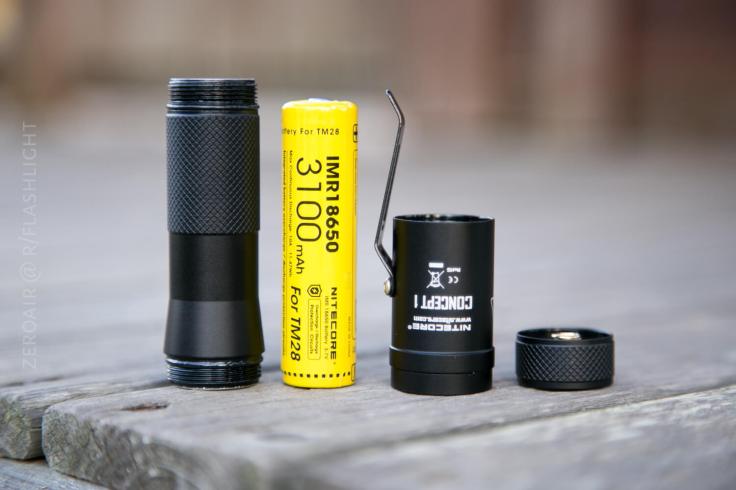 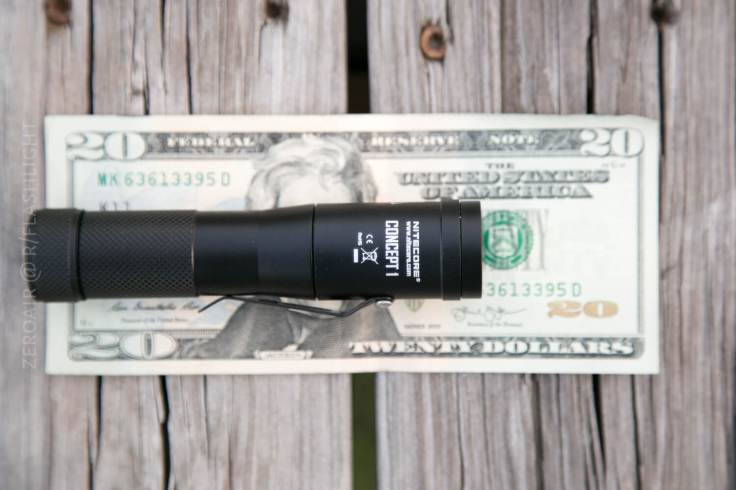 Size is 111.5 x 24.5mm.  It’s not a big light, but a smaller size would be welcome.  This one’s approximately the same size as the Olight H2R, which has onboard charging, too.  But smaller than the TorchLAB BOSS. 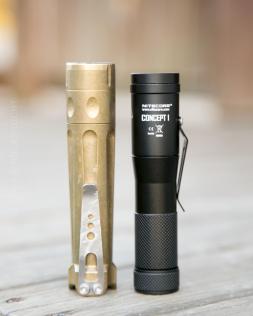 This light comes with a clip installed.  The clip is screwed into the side of the body, and it’s not a deep carry clip.  So a large amount of this light will stick out of the pocket.  Notably, the light will stick out of the pocket just about enough for the whole switch to be out, too.  I imagine this was intentional design, to lower the possibility of accidental activation.  The clip is held in by two hex screws.  It’s removable, but would of course leave two holes in the body of the light.  I’m not sure if this is a standard hole pattern, that might allow replacing with a deep carry clip.  Someone asked and I checked – the clip can be removed, and the screws screwed back all the way to having their heads flush on the body. This will not affect operation in any way.

There’s a lanyard, which connects in a hole in the pocket clip.

And finally, there’s a nylon pouch, which holds the light comfortably in an up or down position.  The pouch has a plastic d-ring and a velcro belt loop.  A fine pouch. 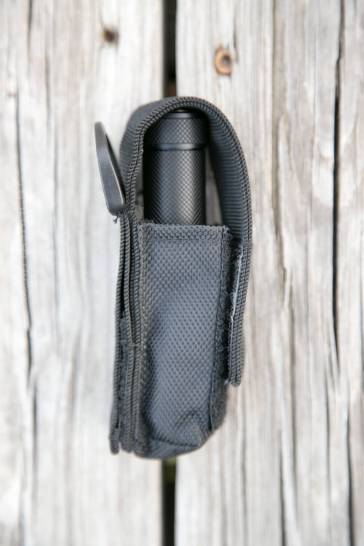 Normally the light will be powered by a single 18650 cell.  I didn’t see it in the literature but based on my Amp readings, you’ll need a high drain cell to fully utilize the Turbo of this light (in fact it pulls over 5A).  Nitecore knew this though, so NitecoreStore.com provided me with a cell for this light.  This isn’t a Nitecore cell review, but I did test it anyway.  It’s labeled as being 3100mAh, and my Opus charger shows that to be quite accurate, at 3060mAh.

The manual also specifically states that the light will run on two CR123 cells as well. It’ll also run on two RCR123’s (and by extrapolation, two 18350 cells, which should be better [higher capacity, no rattle]).

So, even though this isn’t a Nitecore brand cell review, I had a good experience with this one, and can recommend them.

The blip at 170m is me taking out the cell and confirming that it wasn’t being over-discharged.  The wave in the temp log is probably my house AC cooling the room off and on.

Runtime was terminated when output was very low (but still outputting, reading 35 lux), and the cell voltage was 2.91V.

The name of this light makes one thing from the outset, that Nitecore might be “trying some things” with this light. I find that to be nowhere more evident than in the UI and Operation (both, yes both).  First, the switch.  It’s a side electronic switch.  But the switch itself is covered with a metal hinged paddle type mechanism.  Very pleasantly clicky, and also easy to actuate.  Good things?  Yes, absolutely!  Now, do I like this switch better than a rubber boot switch, with maybe an indicating emitter under there? I like it better than a rubber switch, yes.  I do like indicating switches, though….

Now the bad side of this side switch is coupled with the fact that this light has no electronic lockout.  The switch is proud, and very easy to activate.  Very easy.  I resorted to doing the recommended action of 1/4 turn on the tailcap for a physical lockout (something I hate doing).

So this switch is as much lose as it is win.  In Concept 2 (hope they come up with a better name), I hope we see electronic lockout (and not one that’s just “long press”).

Now on to the second biggest polarizer about this light; the User Interface.  Here’s a table, to the best of my ability:

Notes about the UI:

It is my opinion that this UI is very purposeful.  I’m not sure for whom it’s designed but I think the UI would be great for someone who wants a one mode light.  Because once the light is set to any particular mode, it’s as simple as long clicking to always get that mode.  Yes, there are caveats (ie turbo is easy to hit), but it’s still a viable use for this UI.

I can say that it’s taken me a long time to get accustomed to the UI on this light.  I don’t dislike it strictly speaking, but it’s been a challenge.

* This category not useful yet since I don’t have a calibrated sphere.  I’m still recording these values, and working on calibration.  They are useful in the sense that they give actual mode spacing information.

There’s a single Cree XHP35 HD in this light, behind a smooth average depth reflector.  This makes a “throwy” beam (though I wouldn’t describe this light as a thrower).  What I mean is that the light has a tight concentration, but is not a pencil thin throwy beam.  So there’s a distinct spot, with a secondary spot of maybe 1/3 intensity, then little spill.

I’ll add that there’s a very clear yellow spot in the very center of the beam, visible on all modes but low.

With the smooth reflector, size and shape of this light, and availability of the emitter, I’d probably rather see the HI version in this light.  Or maybe just an option on the emitter; that’d be good.

I have no issue with the tint, though it’s not my preferred “rosy” and has, as mentioned, the yellow spot in the center. 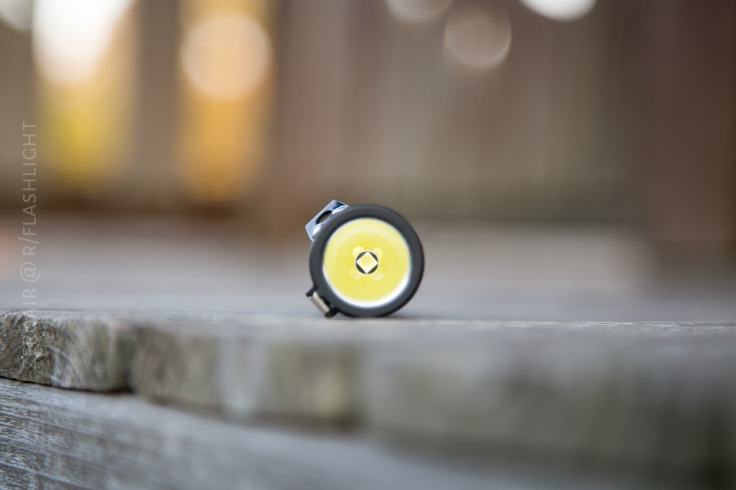 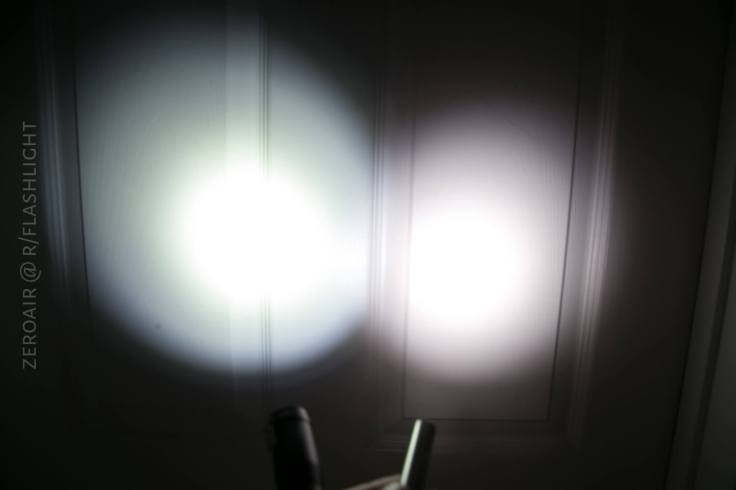 I hinted above but I’ll reiterate here.  I like this light.  It is by no means perfect, but I do find that it’s a fun light, and I like the size and shape of it.  I can get accustomed to the UI eventually, but the lack of electronic lockout isn’t great. 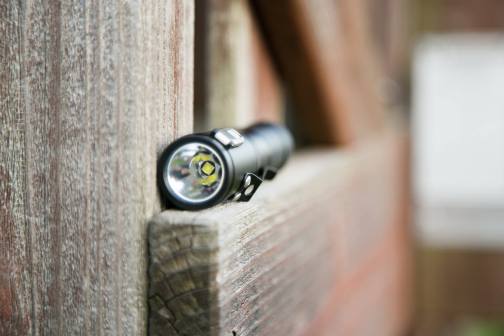 James Donkey 619 keyboard should be done soon.  The next light I’ll have will be the OTR U16.