Gravitating closer and closer to the keyboards I really like most…. after a 104 key board, then smaller board… now this James Donkey 619 87-key keyboard, just right! (?)  Whether it’s perfect for me or not, I hope the review will help you decide if it’s perfect for you.

I’m not sure that’s the official James Donkey site, but the official site doesn’t seem to list this exact model (yet?).

There are a number of 619 models, including a 104 key, this 87 key.  Of this 87 key model there are a few models too, broken down like this:  Black with orange base (what you see here), and white (or “eggshell”) with orange base (same base).  Among those, there are switch options, too.  Each is available with black (as seen here), brown, or blue Gateron switches.

This board types wonderfully and looks pretty nice too.  It’s a little more adorned than I like and the font isn’t my favorite, but it’s still a great typer. 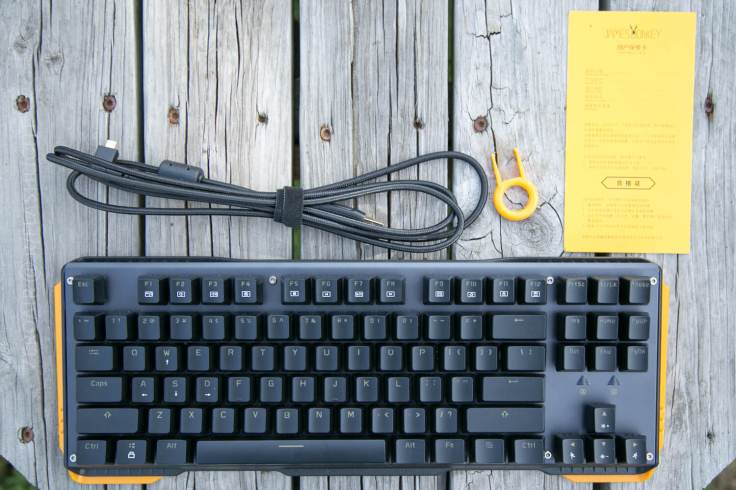 Here’s the photo album, and a bonus color video!

This board ships in a nice, plain cardboard box.  The matte box has some glossy printing, and not much more.  There is a sticker around the edge of the box; a security sticker as it were.  The printing on the box is very subtle…. I like it.  Not that it’s super relevant, since I don’t think I’d be keeping this box anyway. 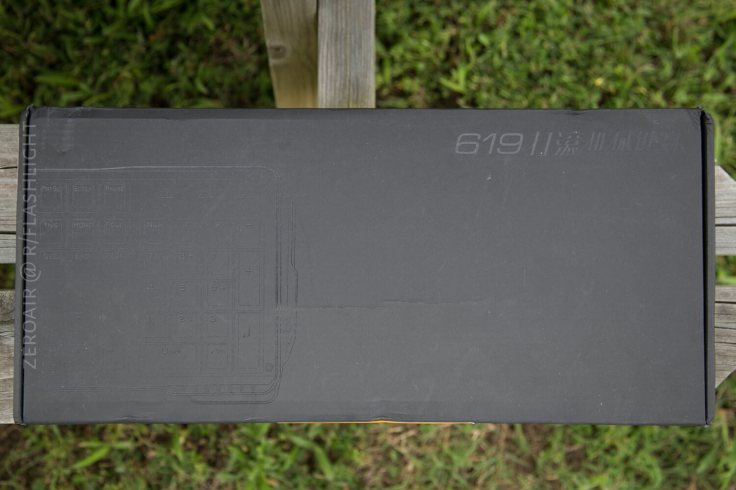 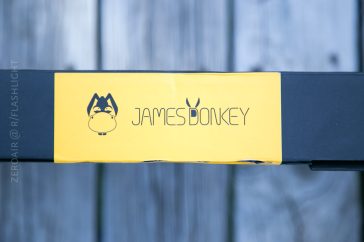 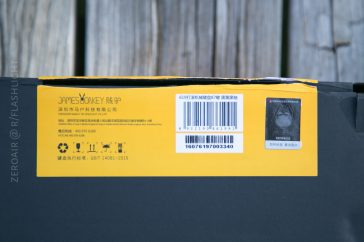 Inside the box is the board and goods.  The cable is stored under the little cardboard bit above the keyboard, so during shipping the two don’t really mingle.  Same with the keycap puller.

There is actually no manual included with this board.  There definitely should be.  I don’t find any online sources for the manual, either, which is a bit of a surprise.  Hopefully I’ll cover enough below to help you use the board, anyway.

This is an 87 key keyboard and almost has a small footprint.  Unfortunately the orange plastic base that the risers reside on, kind of make the platform bigger than I want an 87 key to be.  The board dimension are

39cm x 5.75cm, and about 5cm with the feet up.  The manual says actual dimensions are 388x153x41mm.  Probably slightly more accurate than the tape measure I was using. 🙂 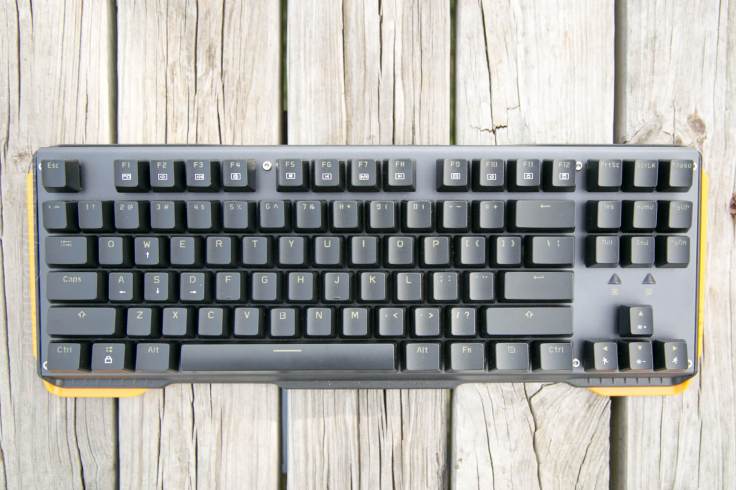 I’ll be honest and say, this board is like most other boards I’ve handled:  The build quality is just fine.  I have absolutely zero complaints about the build quality on not one single aspect of this board.  I do have a couple of complaints which I’ll cover later, but none of them revolve around build quality:  The board is well built and parts are all snug and well fit. 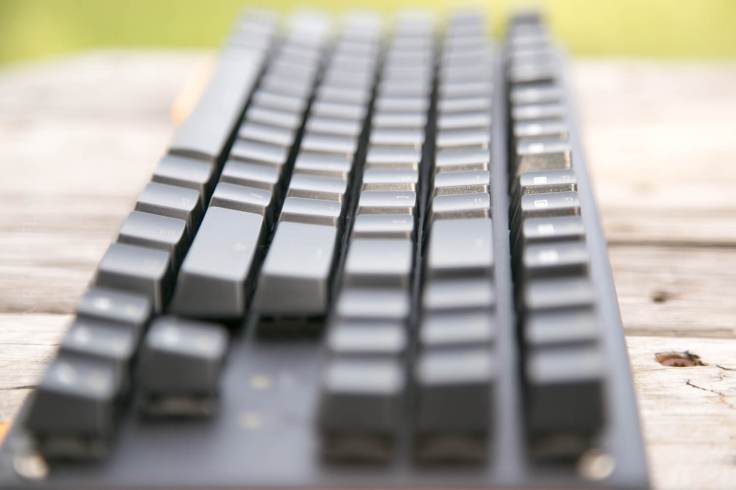 Hex screws are used throughout for securing parts-to-parts.  For example, below, the yellow (orange?) case adornments which also hold the risers, are held on by this Hex screw.  (2 each, total).  Note that while these can be removed and the feet removed too.  If you do this be aware that there’s a third phillips screw under the rubber foot.  Removing this orange piece will give you a board that sits perfectly flat, and actually has a very nice footprint.  I’d love if the legs were not on these plastic pieces, and I could still get some height without these plastic pieces on the board.  If nothing else, the hex screws can be replaced, giving a very crude bit of lift in the back, after these plastic pieces are gone.

Regarding disassembly, also note that while these hex screws on top of the board are decorative, they’re also functional.  Just like with the platform, there are phillips screws that will need to be removed if you wish to disassemble this board.  7 Hex, at least 2 phillips. 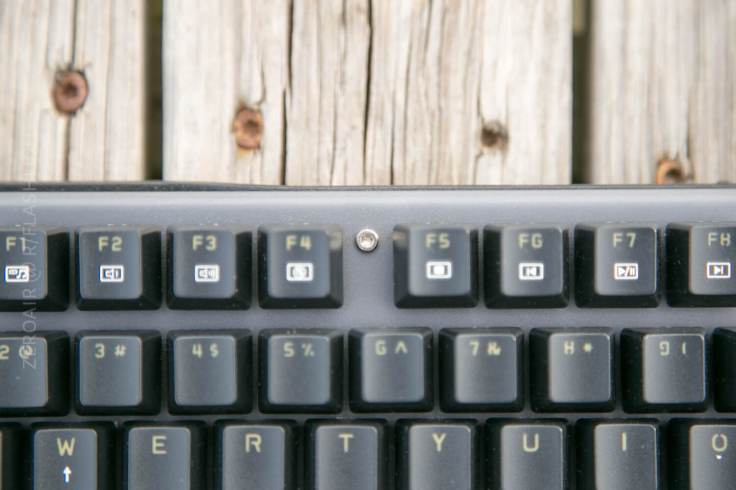 The cable that is included is a very nice angled micro-USB cable.  The body of the cable is also braided, too.  This is a very nice cable!  It has gold plated connectors, too!  The cable connects to the board via a micro-USB slot.  This slot is form fitted for this specific cable: When the cable is inserted it rests not just in the port, but also in a bit of housing that secures the cable.  The board will work with non-OEM cables, too.  The provided cable is 1.8m long.

The keycap puller is… eh!  There’s one included but that’s all I’ll really claim.  These aren’t my favorite type, but they’ll do in a pinch. Get it?  Pinch?  That’s a keycap puller joke.

The bottom of the case is plastic.  Nothing spectacular but gets the job done.  In fact what you see below – both the orange (they call it orange! I’d call it yellow, or mustard… idk.) and the black part are plastic. 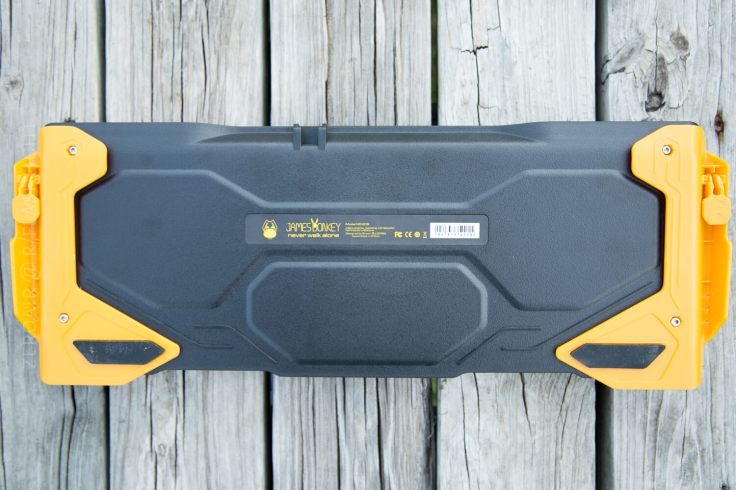 On the top side though, the plate is aluminum.  It’s even fairly thick aluminum, with a rounded edge at the top.  I make it about 1.5mm thick.  The switches rest in this plate, with the LEDs at the top of the switch.  I’m not sure if this is normal?  But seems odd because the logo of the switches [GATERON] is upside down.  Not a big deal at all; probably something that’s normal and I’ve just never noticed before.

There one of the feet, that can give some lift to the board if you like a sharper angle height.

Here you can see the port for the micro-USB, and the housing allowed for the custom cable.  Plenty of room for a non-OEM cable. 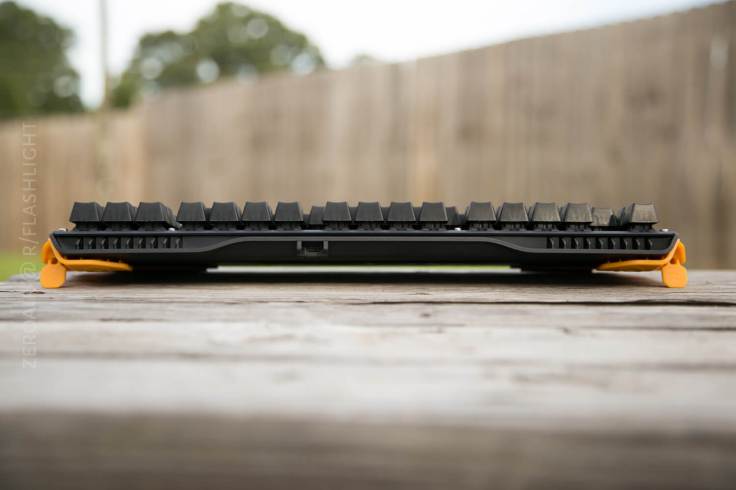 Even with the feet down, the board isn’t really flat.  The feet raised adds about 1cm to the height in the back.  Not shown here, but as stated above, the yellow parts are completely removable, and you could have a very flat, nicely sized 87 key board if you chose to remove those. 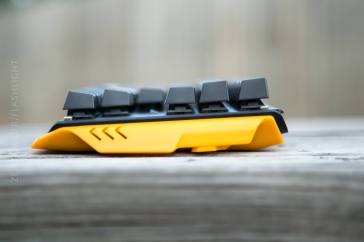 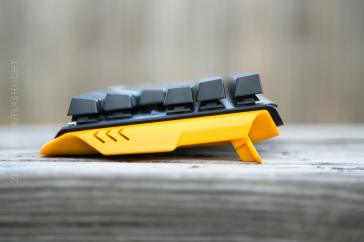 This is a typical 87 key board.  Note that the Fn row is slightly space off the top, giving a nice relief from the number keys to the Fn row.  Same with the arrows and the Home group:  they’re spaced off to the right, giving a very “normal” spacing.  You pay for this with overall dimensions, but that’s a price I’m completely willing to pay.

The keycaps are doubleshot ABS, and some of the keys are even printed.  All of the Fn keys, for example, and the arrow keys, and even the WASD keys, are screen printed.  The doubleshot is black primary caps (obviously) and the lettering is orange, which plays well with the color of the switch emitters.  I will say that the keycaps are one of my big disappointments on this board:  The doubleshot (or the lettering, really), is not printed all that well.  It’s partly a strange font, and partly that the doubleshot just doesn’t seem all that good.  The light shines through, yes, but it does so very unevenly.  Compounding that is the font, which makes it look like the doubleshot didn’t fill in everywhere they meant for it to…. it did, but the font provides that deception.

All the switch options for the James Donkey 619 87 are Gateron switches.  What I have here are Gateron Blacks.  I can say that I love them – they’re just slightly heaver than my other boards’ switches.  The actuation force is (reported to be) 50g, and they’re linear.  Linear is a fantastic description of these – the force is just straight down and seems to firm up toward the bottom…. this isn’t really a switch review so this part will be short, but in short, these switches are great.  I find this to be a great switch for typing…. things… like reviews. 🙂  It’s a very low effort switch.  (I do know something about low effort switches, as I have Cherry MX Speeds on my work board.) 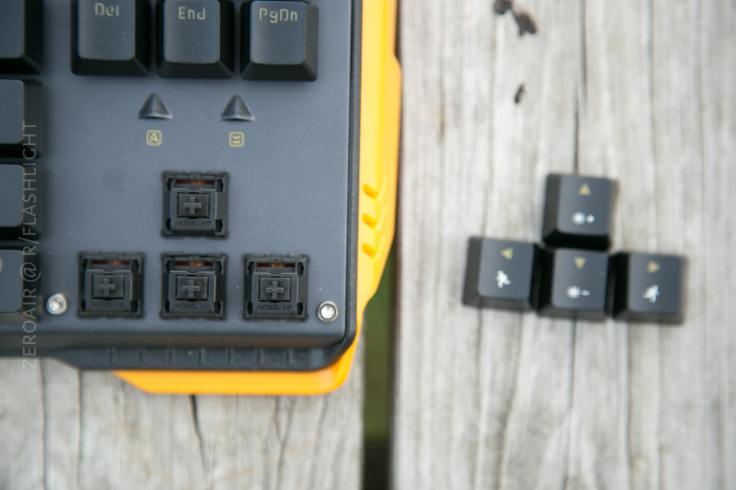 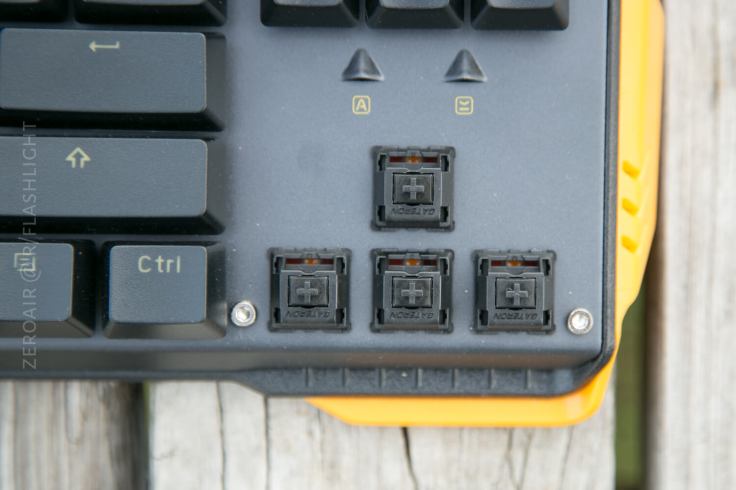 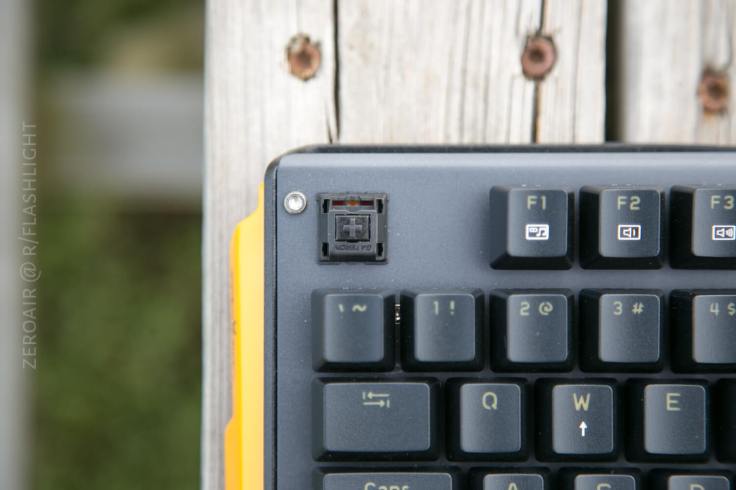 I’ve talked a fair amount about the micro-USB cable and port already, but there’s nothing else.  The board does not have any form of wireless, and requires the micro-USB connection to operate.

However it doesn’t require any software – it’s completely plug-and-play.  I use it exclusively on a Mac, with no issues.

I’ve said above that there’s no manual.  That’s not quite true, as the card which I noted as a warranty card is a warranty card, but also has the very short manual on the back side.  It’s in Chinese, however….  So I can make out the keyboard commands, but not what they do.  Let’s see what I can hash out, though. 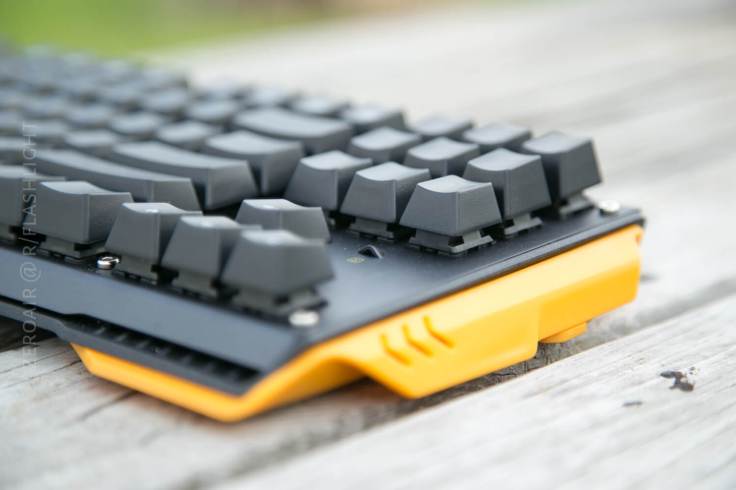 There are also two little indicating switches above the arrows.  These have blue LEDs (not orange, sigh) and in all honesty, are quite bright.  I’d love to see matching LEDs here.  Or a way to turn them off.  They can be distracting.

Of course on this board there isn’t actually any RGB.  Just orange.   There are a number of LED options that can cycle, mostly covered in the Interface section above.  Here are a few shots of the emitters in action.  They aren’t anything special, and I wish they were just a little more orange, for being called “orange.”  Same with the case actually.  But they’re fine emitters, not distracting, and fun to mess around with. 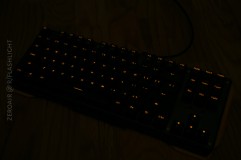 Here’s a short video of one of the modes:

Just a ton of 87 key boards would compare to this one.  This is probably a little unique in having only orange switch LEDs, and orange accents all over.  It’s also a great price point, since it has actual Gateron switches, instead of some lesser brand like Outemu.

Up next I switch fully back to flashlights, and I’ll have the JETBeam E10R very soon.  I have one more flashlight this week too (hopefully, if I get it done).  And this will be the first time in a long time that I haven’t had a keyboard to review!  Maybe I’ll get the Anne Pro finally… 😀