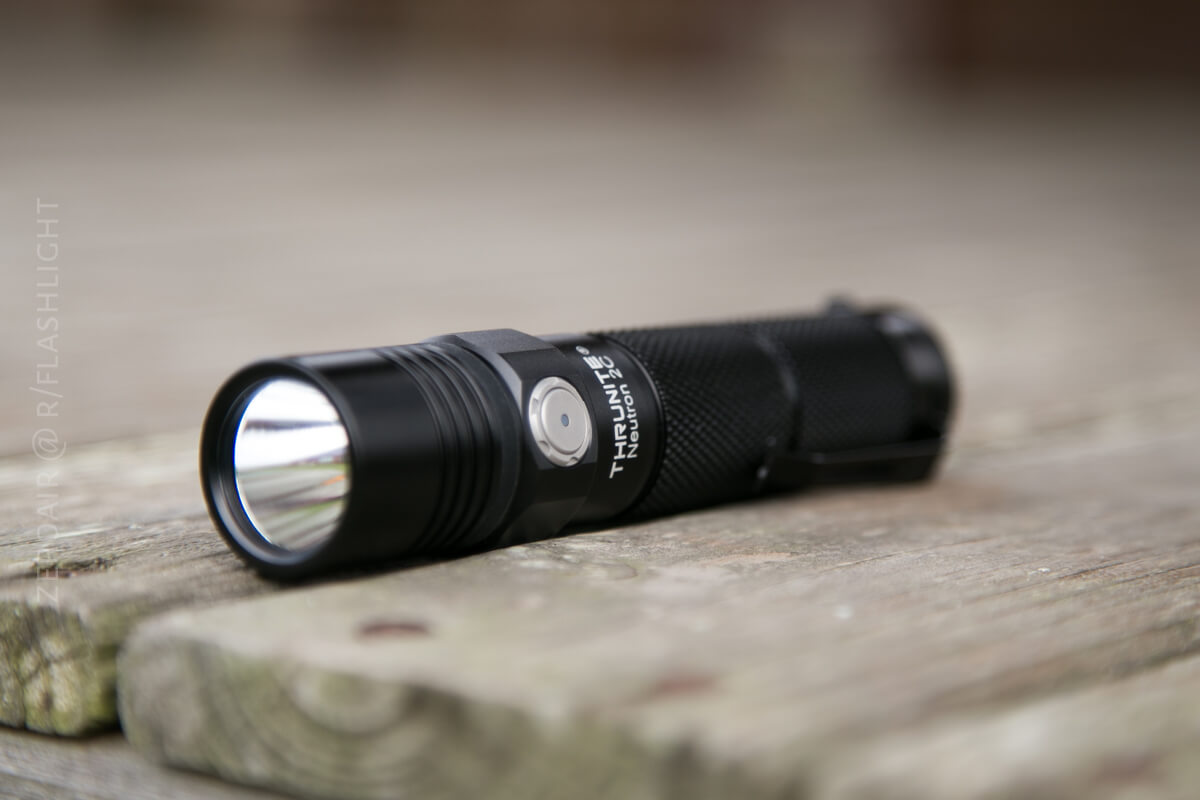 This is a much talked about light that I didn’t know much about.  I finally talked Thrunite into sending me one.  Here’s the review… Spoiler this light is great!

This is listed as “V3” – clearly there are some older versions of this light.  We won’t concern ourselves with those.  There are two versions of the V3 light – a cool white (CW) and neutral white (NW) version.

I am extremely pleased with this light.  The inclusion of a cell tube that can be shortened to work with 18350 cells should be a benchmark for 18650 lights in the future.

The light arrives in a cardboard slip-fit box.  The box is easy to open (there are relief circles to get fingers onto the small interior part).  The light is in a thin plastic bag, and this is held in place by foam.  It’s a good, secure package. 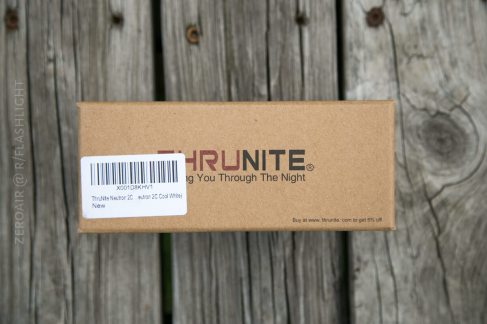 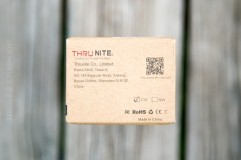 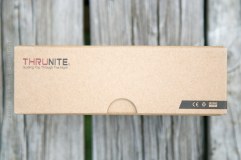 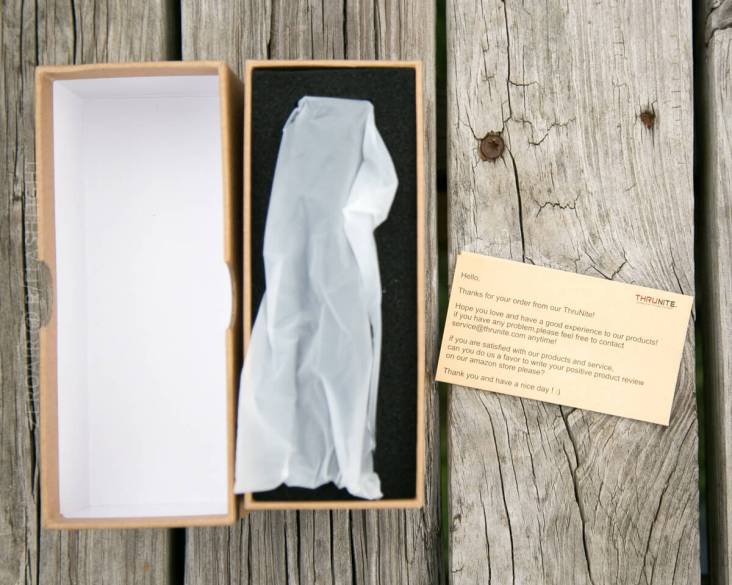 Below you can see the manual.  It’s a fairly simple manual, in one of my favorite formats (a table!), with not much superfluous material.  This light is very feature-rich, however… does the manual cover all the needed information?  I think so, and if not it’s pretty easy to understand the features of the light anyway.

Thrunite has built a sturdy light here.  Everything is crisp and works like it needs to.  The switch is (or seems) metal, and has no unnecessary travel.  The rubber boot that covers the charge port is very secure, and also sits nicely flush with the body.

The knurling on the body isn’t my favorite kind and after a bit of use, it does show some wear.  Certainly not “bad” but the diamond knurling is pointed, and those points are a bit fragile.  There’s also a very slight bit of battery rattle with the provided 18650. 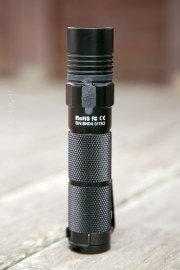 The switch itself has an indicating dot right in the center.  This light is active in all modes except moonlight.  More on that later.

Here you can see the parts broken down.  The head has a button for contact with the positive terminal.  The tail end has a spring.  I was not able to disassemble the head, so I can’t speak toward the possibility of an emitter swap.

Below, the tail portion of the light, and [what amounts to] the 18650 ‘extension’ part.  Note the beefy ACME threads.  They’re well lubed, and function perfectly. 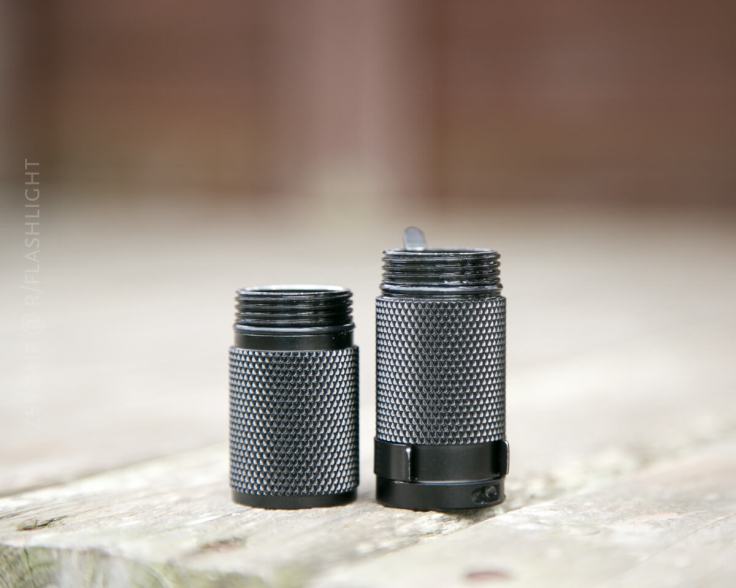 As far as 18650 lights go, this isn’t the smallest.  However with the addition of built-in charging, length can certainly be forgiven.  Add to that the option to work with two cell lengths… size is even more forgivable. 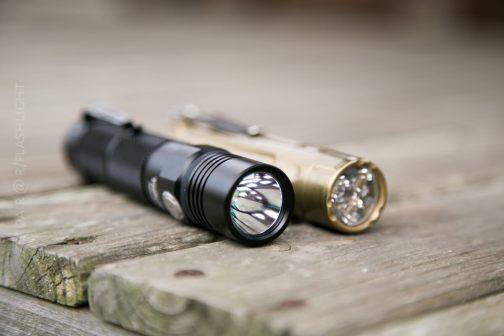 Included with the Neutron 2C is a very nice nylon pouch, with a plastic d-ring.  It holds the light in either orientation, and is easy to open. 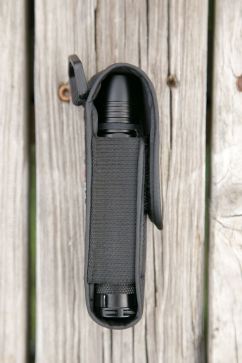 The friction fit pocket clip attaches very near the tail of the light, and is very snug.  It’s not reversible, but can be rotated easily.  It’s nearly a deep carry clip, but not quite.  however, as long as the light is, the clip is certainly deep enough. 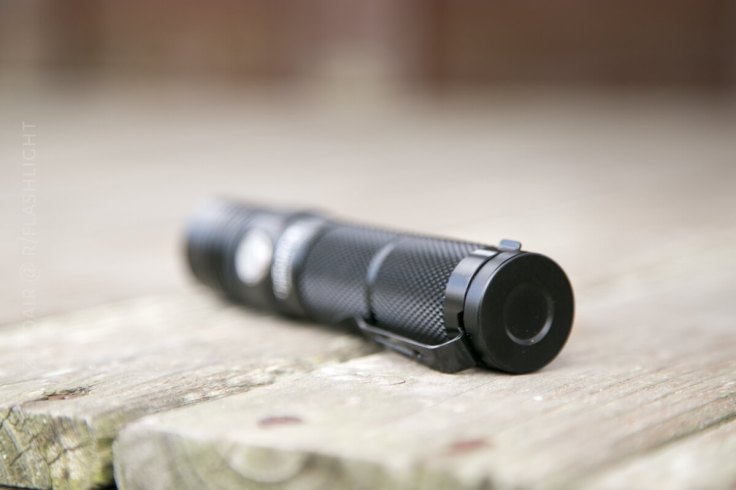 And included in the package is a lanyard, which attaches through the hole in the tail end of the light, seen below.  There’s also a reasonably good place to attach the lanyard on the pocket clip.

This is a very versatile power system.  Primarily, it’s an 18650 light.  But also included in the body itself, is an extension tube which can be removed to allow use of 18350 cells.  And the driver is versatile enough to accept the voltage range from 2.7V all the way up to 9.0V – meaning it’ll work with 2x 18350 cells as well. The actual performance of the light is about the same for all cell scenarios, so the only real difference is runtime.

As you can see, very solid 1A charging until it starts dropping based on voltage.

The same 1A charging, which for the 18350 I was using, is over 1C.  A little high for the smaller cell, but still acceptable to me. 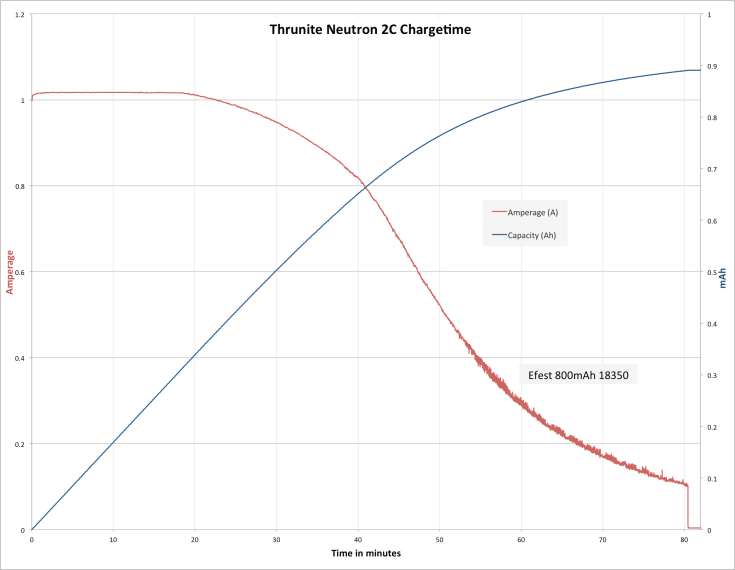 The charge port is a regular micro-USB on the head of the light, covered by a rubber boot/ring.  It’s a secure cover.  This type charging means that the Thrunite Neutron can charge any cell that it lights with – no proprietary charging here!

There’s a single, indicating, electronic side switch on the Neutron 2C.  It’s quite clicky but there’s no superfluous travel, and no wobble; it’s a nice clicky.  It’s a bit loud.

Click for on.  This will be the last memorized mode.  Clicking and holding the switch will ramp in either direction (opposite to the direction it ramped last).

From off, long press for moonlight.
From any state, double click for turbo.

When the light is on (excluding moonlight), the indicating switch gives an idea of the cell voltage.  Blue means above 3.2V.  Flashing red means 3-3.2V. Solid red: 2.8-3V.  Below 2.8V, the indicating light will be off.  Maybe good for saving power, but also potentially confusing.

This is a similar functionality to other Thrunites with on-board charging.  I think this whole indicating scenario could be cleaned up a bit.  But still, it’s not all that confusing, and easy once it’s committed to memory.

This light has a fairly deep, smooth reflector and under that is a Cree XP-L V6.  The beam is throwy with a tight hotspot.  Not a thrower by any means, (though, 230m is respectable), but for this class light (tube 18650), it’s a tight hotspot.  There’s a small amount of spill, though. 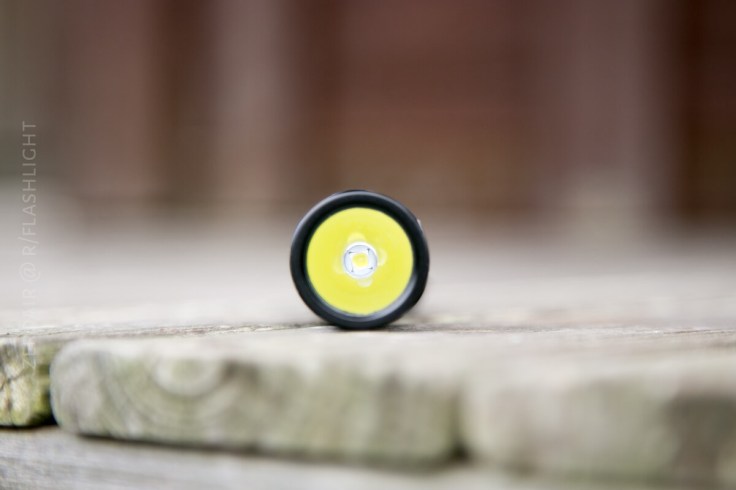 When not compared to the awesome BLF-348, the beam doesn’t look nearly as green.  Note the tightness of the hotspot.

I really don’t believe there are any other lights on the market right now that offer the things this light offers, in a single package.  Sure there are lights like the Sunwayman C12CC and C22CC which use the same head with different bodies to achieve the same thing (that is, charging and 18650/18350/2×18350 support), but even that is two separate packages.  And there’s the TorchLAB BOSS, which kind of does the same thing but lacks charging.

Next I have a couple of very interesting lights.  The Armytek Elf C2 (my first Armytek!) and the Olight HS2.  And knives.  So many knives!