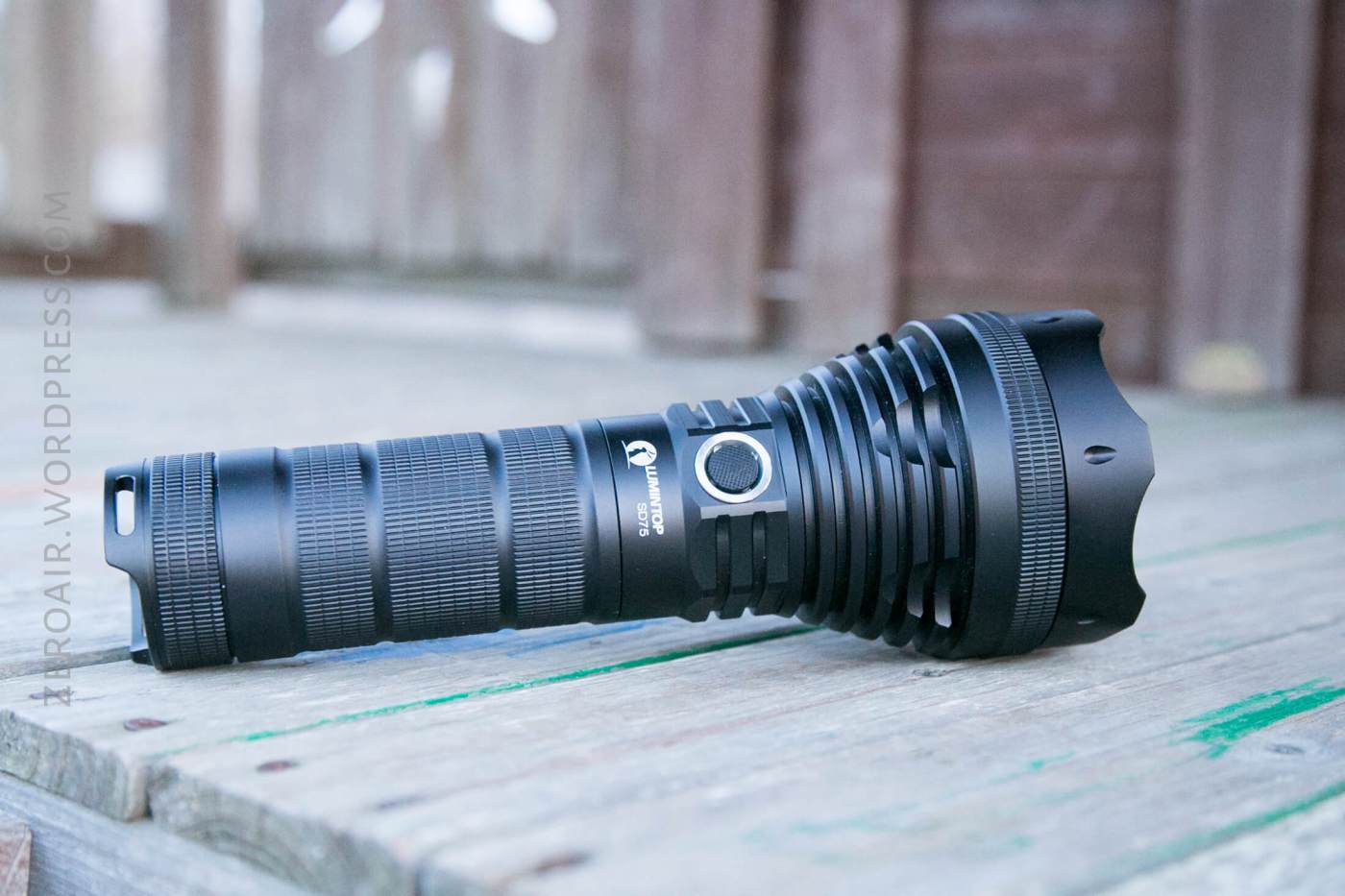 Today I’m reviewing a light that isn’t even a new light.  I asked for it, and GearBest provided.  I have liked the looks and specs of this light for a while and I’m pleased to have one on hand to test.  Let’s see if it stands up to my expectations.

I believe there have been at least two versions of this light.  The original, and a “fixed” model, which addressed a charging issue.  As far as I know, everything available today is the new version.

Honestly, the best price I see for this light is [currently unavailable].  I think GearBest sent this one to me simply because I asked (enough times) for it, not because they’re looking to sell a bunch.  (They currently don’t even stock it.)  Special thanks to GearBest for that.

I believe retail was around $110 when it’s available.

This light has a few quirks, but I can honestly say that I love this light.  I can’t think of a large format light like this that I’ve liked better.  I think this will be a perfect “lives in the car” light for me, particularly with the included car-charger.  The 700m of throw isn’t too bad, either.  On my “flashlighty” scale, this one rates as “very flashlighty.”

Cells are not included in this package, but I believe there could be packages which do include cells.

The light actually ships in a box, and then in the case as seen below.  The briefcase is not wrapped with other protective material. The case does not have a lock. 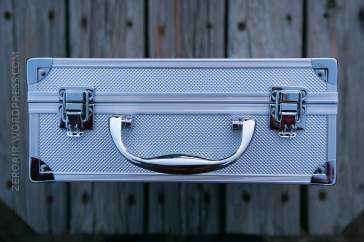 Inside, there’s a lot of foam for holding the flashlight securely.  Note that the flashlight is stored with the body (cell area) separate from the head.

Above is the (fairly short) manual.  This mostly a ‘spec’ manual and less of an operational manual.

The SD75 is very finely built.  It’s probably slightly larger in the handle area than it could be, but there’s a very nice weight and balance to it.  The threads are anodized and have minimal lubrication.  Everything just seems to be done right with the build on this light. 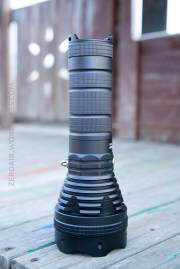 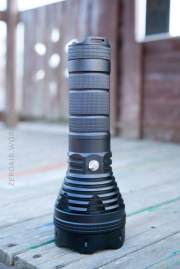 The tailcap is just that- a cap.  It even has a window, which shows bits of the light that I’ll discuss later.  It’s a nice touch, but I am not sure (especially since it’s not covered in the manual) the actual utility of this little window.  Threads for the tailcap are anodized and properly lubed too.

Note that the cell tube is threaded the same on both ends, so it’s possible to put the light together incorrectly.  Of course it won’t work this way.

There’s enough tailcap around the bottom edge that the light tailstands with relative ease, and security.

The light comes apart in the following way. 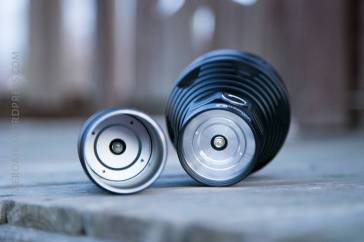 I didn’t pull apart the head, but I will likely do that.  I’m interested to see what size driver this light has (if anyone knows, please say in the comments!).  I’d love for this light to have a lower low, and like the body/size enough that I’d consider doing it myself. 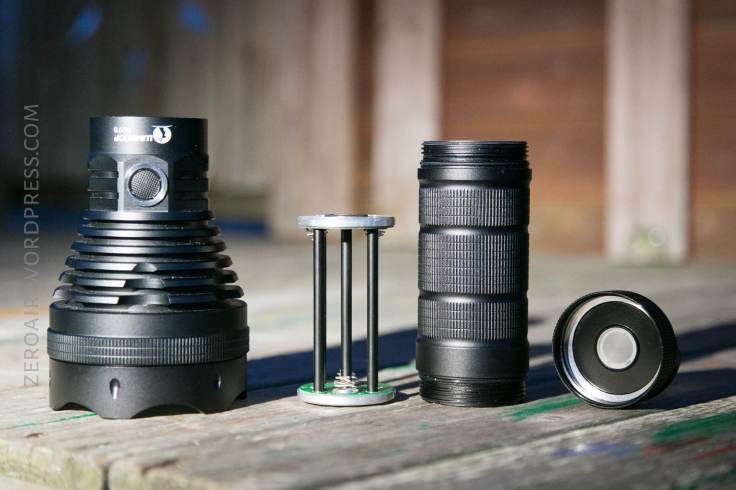 Make no mistake, it’s a big light.  It’s an especially big light when considering it only uses four 18650s (not 8, as the size might imply).  There’s a lot of mass in the head, and of course the tail has some charging features and two USB outputs.  So there are reasons it’s quite large and has only 4 18650s.  Below see a comparably sized (but 8×18650) light, the Tiny Monster TM38. 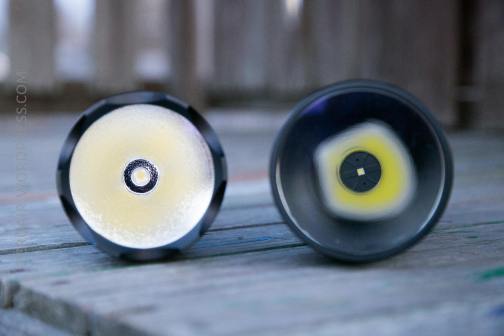 The tailcap has two large loops which will hold a lanyard, as does the side.  The side piece is a screw-in loop.  Coupled together, the can make nice shoulder strap attach points.  There is no shoulder strap included.

The side loop also unscrews, revealing a standard 1/4″ tripod mount.

No pouch is included. 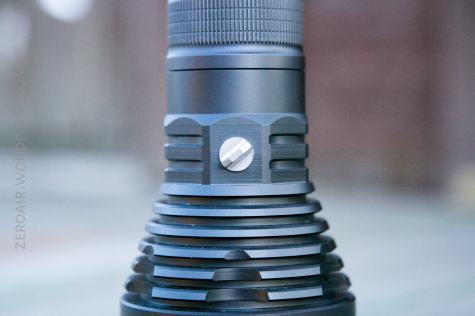 Lumintop’s SD75 is powered by four 18650 cells.  It’s a 2s2p setup, so it’ll work from just 2 cells properly placed in this battery carrier, however.  I found that the carrier requires quite long cells.  Below it can be seen with 4x 30q’s, but I’ve had to add a rare earth magnet to these in order to have them work.  I used a magnet with my set of protected Efest Purples, too.

Managing low voltage within the light, and having a shorter cell holder would suit me much more – this could shave probably half a cm off the length of the light.  That’s minor, but the light is already larger than it has to be…. 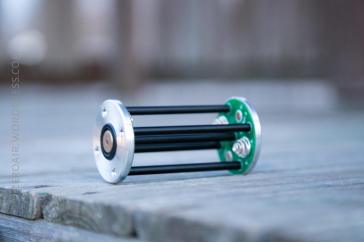 Here’s the runtime of the SD75 with the above cells.  I stopped the test around 100 minutes to test the cell voltage – at that time they were around 3.15V.  I didn’t want to run any risks of over-discharging the 30q’s, so I went ahead and stopped the test there.  The cell holder was still reading around 6.3V at this point, and when I did turn the light back on (as seen in the graph), the output was low, and higher modes couldn’t be selected.

Also a huge feature of the SD75 is the on board charging.  Lumintop provides two plugs – one is a wall plug, and one is a car adapter (for a cigarette lighter).  I still don’t have a way to log charging over a barrel plug, so I can only effectively report that charging does work.

You’ll see two female USB ports on the end, as well.  One is a 1A port, and the other is a 2A port.  However, in my testing I was able to draw over five amps out of these ports (individually).  So, these ports will be able to power whatever device you connect, most likely.

Below is the barrel plugs. 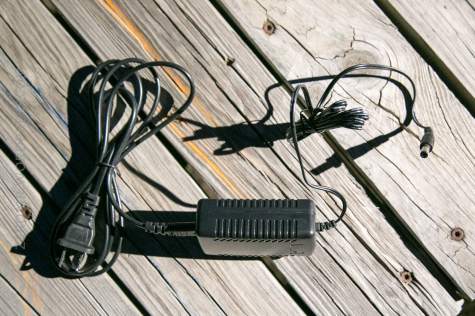 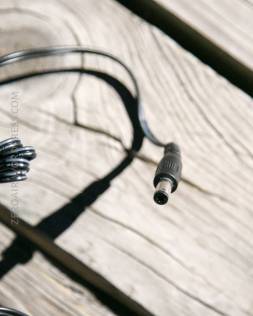 Lumintop also provides an accessory light of sorts.  It’s a (very toothbrush-like) USB powered warm white, adjustable light.  Great for low light needs – there are no modes, just on or off. 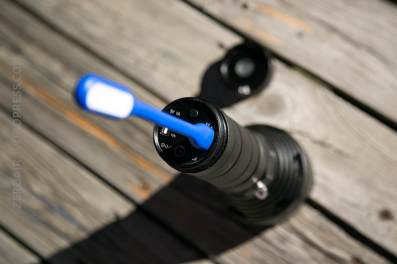 There is a single side e-switch on this light.   Operation is simple, and there aren’t many modes.

Hold for on.  Click to advance modes (L>M>H).  Release on desired mode.  Hold for off.  Light will remember previous mode, and start there on next “on.”  Double click for strobe.

The USB outs also have a switch, too.  This simply turns the USB ports on or off.

The switch is very nice – easy to find without looking, big enough to use easily, and not easy to accidentally activate.  Note that there’s no electronic lockout – you’ll have to unscrew the body a bit in order to lock the light out.

The emitter of choice in this big ol’ light is a Cree XHP70.  It suits the light well, and while not really intended to be a thrower, does throw quite well (around 700m).  The reflector is orange peel, and smooths out the beam nicely.  There’s a very concentrated hotspot, but this isn’t a pencil beam thrower.

The accessory light is an unknown emitter, likely COB, and is nice and warm.

The Acebeam K60 is a nice comparison to this Lumintop SD75.  Higher max lumens, same throw, same cells and emitter, but it has a control ring instead of a side switch, and a tail switch.  Also has more modes.  I don’t love control rings, and the tail switch is a wash for me.  I don’t need more lumens at the cost of nearly double the price, so the SD75 is a nice winner for me.

I have another Lumintop on deck, the Ant Brass!