GearBest has been sending out these VC4 chargers lately, an I was on the receiving end.  I’m pleased with that, since I typically like XTAR goods.  This charger isn’t new, and is quite simple, so could be a good standard.  Read on to see how it tests!

This charger goes for $16.99 on GearBest

This is a nice little charger, with plenty of size for two 26650s and two 18650s (at one time).  Billed as “four chargers in one,” this charger should be able to do 3A total.  Based on my testing, I can say that’s at least close.  I don’t care for the barrel plug, but otherwise, this is a good charger.  I like that this supports Li-Ion and NiMH.

Clearly see what’s going on with the batteries.
• Tachometer-style LCD display shows detailed charging status
• Powered by any 5V USB power
• Intelligently chooses charging currents from 0.1A to 1A
• Wide adaptability, adapts from 10440 to 32650, from Li-ion to Ni-MH
• Energy-saving LCD backlight, can be turned off at your will.

XTAR uses their standard white package with blue text.  The box has a nice photo, and some general specs.  There’s also a scratch-off proof of authenticity sticker (bottom right in the right photo below).

Also included (and in use inside the package) is a leather(ish) XTAR branded bag with a draw string.

Here’s a link to a pdf manual.  I’d call it a good manual.  In reality the product is fairly uncomplicated, so the manual isn’t all that needed.

XTAR has great build quality, both on their chargers and their lights.  I like the plastic used here – it ends up feeling solid and doesn’t have any hollow ring or tone to it.  The display is (ridiculously?) crisp and bright, and works very well.

Each bay is labeled with a max current and cell pole orientation markings, which is a nice touch. 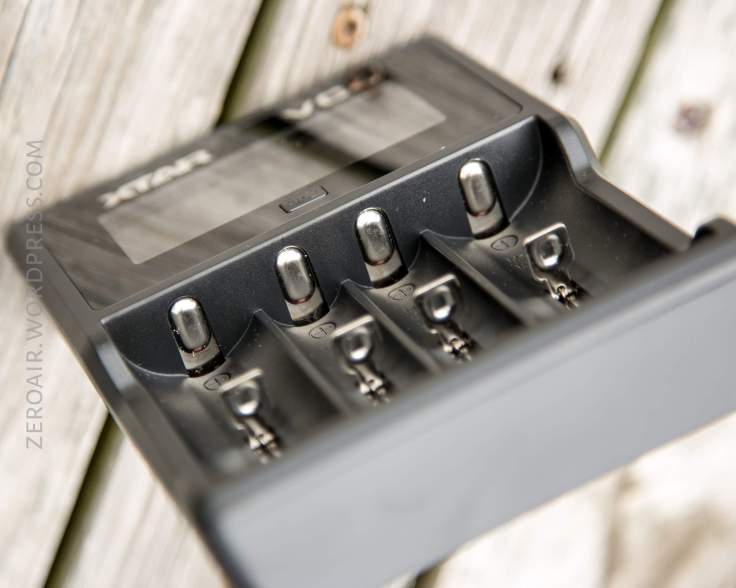 These posts on the negative end are stiff and never bent or felt soft in my use. 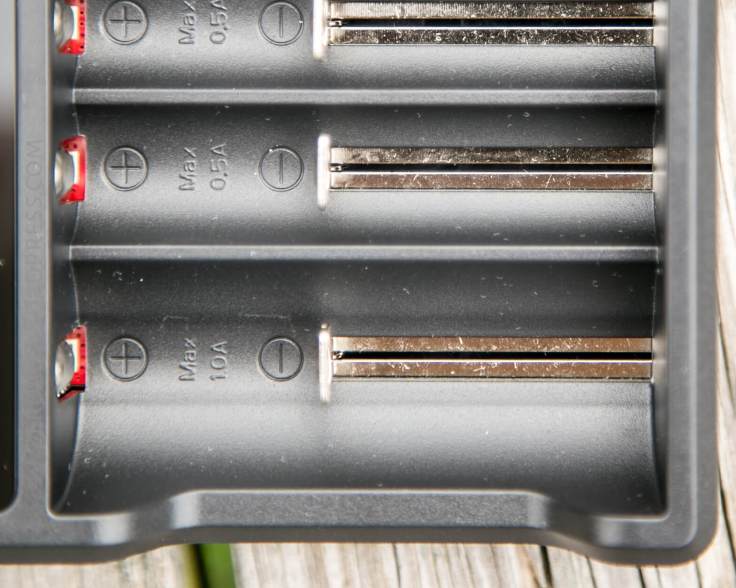 The bay depth is around 18 or 19mm, so anything thicker in diameter will stick out of the charger.

The VC4 is powered by USB.  Strangely, the cable has USB on one end, and a barrel plug on the other.  I find this very strange, since micro-USB seems to be a better choice.  I suppose this eliminates any possible confusion about there being USB-out?  I’m not sure, but it certainly means you better keep up with that cable.  Another possibility would be to use a barrel plug, but have it be a more standard 12V, and not the 5V USB.  (A normal 12V plug will not connect to this opening.)

That said, power works fine and as long as you have the cable, it’s nice that it can be plugged in practically anywhere.

And otherwise, the charge curves look great (a little bit of shenanigans on that 2 cell test, but that’s because of my setup, not the charger, I believe.)  All the currents are accurate – 1A charges at 1A, and 0.5A charges at 0.5A.

Honestly I can’t find the manual or product listing saying what’s the max current possible on this charger, but knowing that it’s receiving only 5V 2.1A in, it can’t be much more than the max listed per bay (1, 0.5, 0.5, 1).  That’s a max possible of 3A, but according to this chart in the manual, it’s not possible to hit 3A (which we’d expect). 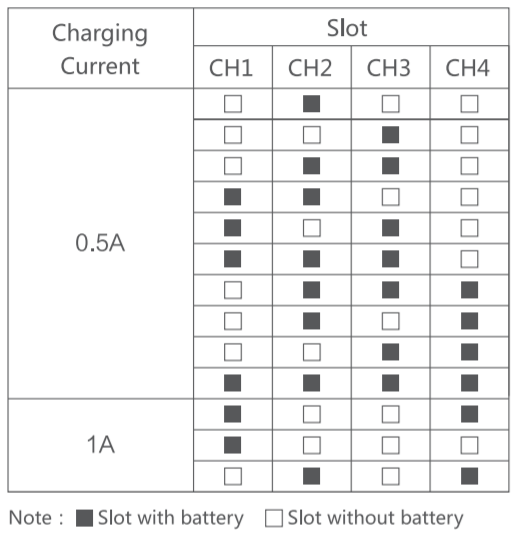 Basically at the point you have cell in that might use more than 2A, the charger steps any >0.5A bay down to 0.5A.  So if all 4 bays are charging, the charge rate is 0.5A.

The VC4 auto detects just about everything, and there’s not much to do.  As a difference from the Nitecore charger I just reviewed (the Q6), there is a button which allow current selection.  The bays default to their highest setting, but clicking the channel button will change the current (of course this is only true for CH1 and CH4, since the middle two bays are max 0.5A anyway). 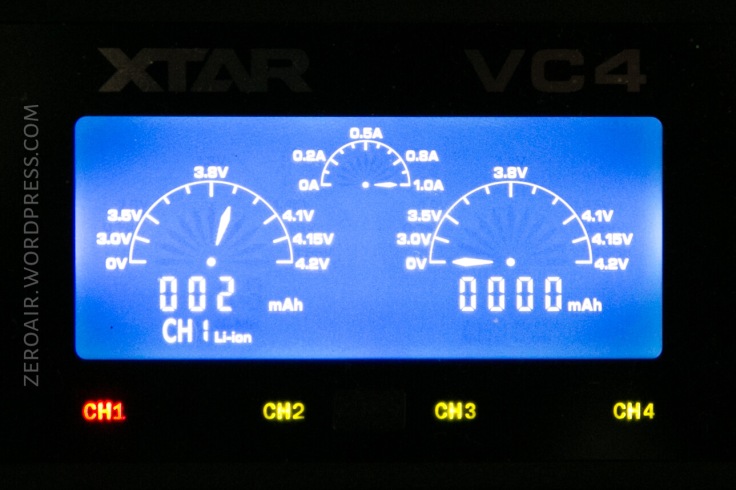 The display is bright and interesting.  The “fuel gauge” seems important to the marketing, but I’d just as soon have had something easier to read.  But it does work just fine.

This charger can restore 0V cells, charge Li-Ion, and charge NiMH.  All the settings for all of those things, the charger handles automatically.

I have a Sofirn light on deck, and I’m undecided about the rest of the week.  Stay tuned!